On the Fifth Day of Die Hard, My True Love Gave To Me...

A Death Moon Come to Kill Us All

As we've been tracing through our run of "movies like Die HardThe 1980s were famous for the bombastic action films released during the decade. Featuring big burly men fighting other big burly men, often with more guns, bombs, and explosions than appear in Michael Bay's wildest dreams, the action films of the decade were heavy on spectacle, short on realism. And then came a little film called Die Hard that flipped the entire action genre on its head., but...", I've had to think about what really makes a Die Hard movie, what tropes are required for it to be a film in this sub-genre and not just random action flicks. Finding those specific elements -- a down-on-his-luck everyman, a terrorist threat, a greedy and charismatic evil leader -- and seeing how they align to create that perfect "Die Hard feel" is part of the challenge, but also the fun. It's interesting to watch movies with a certain eye and say, "I can see how they made a Die Hard out of this." And, today's entry, The Fifth Element is one of the most Die Hard films to ever not bear the name. 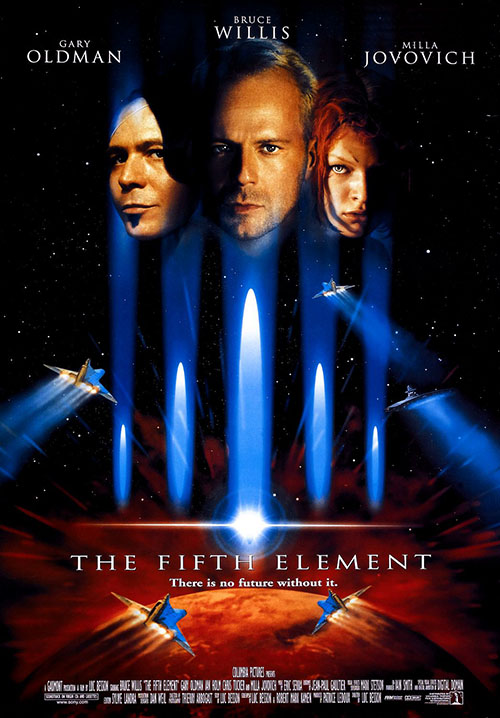 For those that haven't seen this movie before (are there that many people that haven't seen The Fifth Element?), this movie might seem like a bad fit for the sub-genre It's a sci-fi film, after all, and one directed by French blockbuster auteur Luc Besson. The film is very much a Luc Besson film, using all his expected tropes with quick cutting, interlaced jokes and pacing, and a sexy female waif who's both a being of ultimate power and an object of desire. And yet it's also one of the best Die Hard-clones around. It's easy to see not just from Bruce Willis playing yet another riff on John McClain but also from the setup with an alien terrorist threat, a main set-piece that takes place on a float space-hotel, and a lot of quipping while people get shot left, right, and center. The sci-fi trappings help to make the film feel like a Luc Besson joint but, at its core, it's much more of a Bruce Willis vehicle.

After an introductory sequence set in the early 1900s that establishes the basic plot of the movie -- a threat to the world will rise centuries in the future and a supreme being (the fifth element), surrounded by the four Greek elements, will be needed to stop the threat and save humanity. Cut to the future and the threat is now imminent. The fifth element, shipped in from parts outside the solar system, is attacked, its transport going down. The element is saved, though, and when processed through a gene healing machine, it spits out a human-looking girl, Leeloo (Mila Jovovich). Not understanding where she has awoken, Leeloo makes a break for it, crashing into the taxi of Korben Dallas (Bruce Willis). There's instant chemistry, but that has to be back-burnered as Korben helps Leeloo escape from the authorities and get to her contact, the Reverend Vito Cornelius (Ian Holm).

That would be the end of the story for Mr. Dallas except the Earth government decides they need an agent to help the Fifth Element stop the plans to end the world, which are being lead by Jean-Baptiste Emmanuel Zorg (Gary Oldman, making his second appearance in out list of Die Hard-like films). Zorg, Leeloo, Dallas, and a whole bunch of other people all end up on a space-cruise ship which, almost immediately, is attacked by terrorist aliens. And then, once Dallas handles this situation there's the matter of the bigger threat: a Death Moon that is headed for Earth which requires the Fifth Element (aka, Leeloo) to stop. It's a mad dash across space to save all of humanity.

If there's any one driving force that makes The Fifth Element watchable it's Luc Besson. Bruce Willis may star in this movie, along side a bunch of other stars like Holm, Jovovich, Oldman, and Chris Tucker, but this film is Luc Besson's baby, through and through. You can see it from the opening scenes, with the quick cuts, interlaced dialogue, and building momentum. You can see it from the dazzling sights of the movie, a very specific vision of the future filtered through the director's style. And, of course, you can see it in Leeloo, the uber-waif who is both the co-hero of the movie and the object everyone wants. Besson has a very specific vision and The Fifth Element is his vision, pure and distilled. 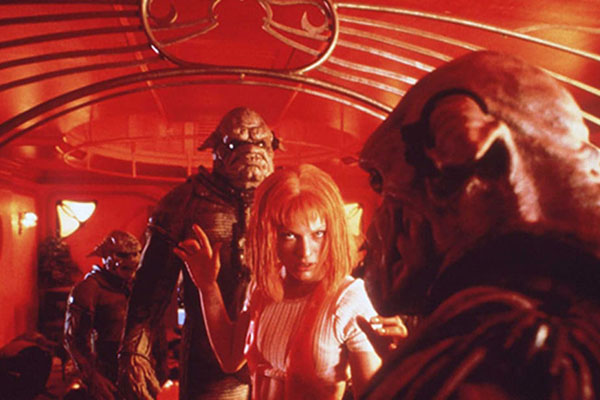 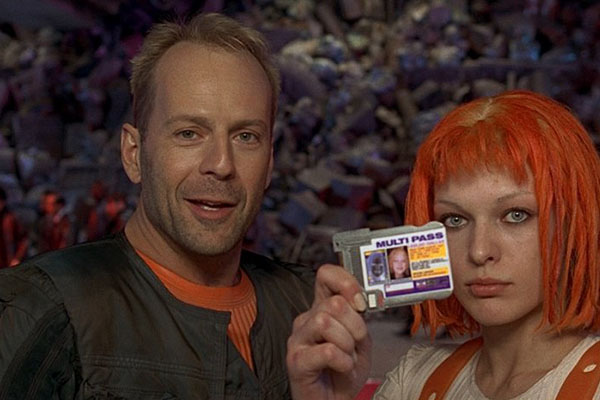 The film isn't like a lot of other movies out there, with the way it plays out, constantly building and iterating on itself. There are a number of great sequences that do this, from an early montage that introduced Zorg negotiating with the aliens terrorists, the Mangalores, which is inter-cut with the government researching the Fifth Element. This is followed later three different people all claiming to be Korben Dallas, all trying to board a spaceship to the space-cruiser, which involves inter-cut conversations, plus scenes of the priest sneaking onto the ship as well. And then there's the bit sequence on the cruise ship, with the terrorists, a bomb threat, and a whole lot of action. It's all impressively stitched together, a film that's constantly pushing and moving and reinventing itself as it unfolds.

The Fifth Element is one of those rare films that doesn't feel like it plays out so much as it downloads directly before you, constantly evolving as it streams directly into your eyes. There are other films that pull off a similar feat, like Scott Pilgrim vs. the World and Fight Club, that pull off that frenetic pacing to great effect for their stories (this despite the fact that all these movies are very different in story and tone). It makes viewing The Fifth Element and experience, something not just to watch but to behold. There are other, better sci-fi films, but action pictures, better iterations on Die Hard, but the whole package of The Fifth Element sets the film apart, elevating it above movies with which it shares a genre.

Of course, credit is due not just to the director (although the lions share does go to his vision), but also the cast who help to power this movie. Willis, naturally, is an old hat at playing this type of character. Sometimes the actor can get pretty bored of his job, such as in A Good Day to Die Hard, but here the actor is committed to his character. Honestly, he seems to be having fun with how silly everything else and that at least helps the film maintain a light, amusing atmosphere. Couple that with Jovovich's turn as Leeloo, innocent but strong, funny and whip-smart, and you have a pair of heroes that keep the movie zipping along enjoyably.

Then there's the villain, Zorg. Oldman is clearly having a blast in this movie playing the scenery-chewing villain, getting to relish this role even more than he could over in Air Force One (which came out the same year). His villain is weird, and goofy, and prone to long speeches where he gets caught up and loses track, but that's part of what makes him so much fun to watch. And through it all, there's a venomous current, a dark evil that runs behind Oldman's eyes and turns Zorg from a buffoon into someone that could be a real threat. 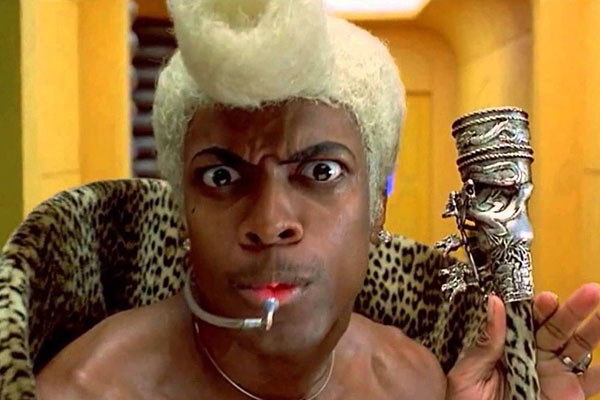 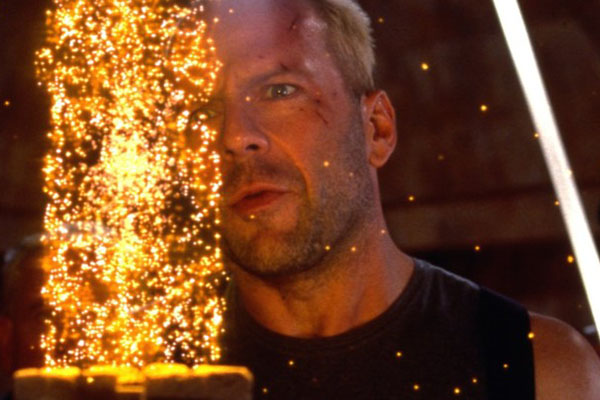 But what's really interesting is that the heroes, Dallas and Leeloo, never actually interact with the villain. Somehow Zorg and Dallas never share screen time while Leeloo only has a brief sequence with him. There are so many moving parts in the film that Zorg can be the heavy and yet, at the same time, barely intersect with the heroes. It's a curious choice but also something that helps to keep the audience guessing. It's hard to know exactly how all the elements come together (pun intended) until the film is done unfolding.

Really, everything about this film is constructed to maximize the fun on screen. Sometimes the film is too goofy, too silly, too caught up in itself, but because it moves at such a fast clip, constantly bouncing and shifting and never sitting still, it's hard to really hold any flaws against it. Sure it's kind of dumb at times, and it definitely goes for big laughs when it maybe should have played things a little more subdued, but it also has the hoy and energy of a frenetic puppy. It's a sci-fi film that just wants to be loved as it bounds across the screen, and it's hard to say no to that.

So, for this year's Five Days of Die Hard I'm going to say that The Fifth Element is the best of the set, edging out even the pretty solid Speed. It's an experience more than any of the other Die Hard-style movies we've looked at so far, and just so enjoyable. It's a particular vision of the action/sci-fi genre, and it does it's thing so well. It's a movie you can just kick back and enjoy while it unfurls on the screen, comfortable and happy. And what more do you really want from a movie most of the time?