For the last few years Fox has been desperately trying to put together a Die HardThe 1980s were famous for the bombastic action films released during the decade. Featuring big burly men fighting other big burly men, often with more guns, bombs, and explosions than appear in Michael Bay's wildest dreams, the action films of the decade were heavy on spectacle, short on realism. And then came a little film called Die Hard that flipped the entire action genre on its head. prequel series inspired by the Die Hard: Year One comic book run. I get the desire for it: Bruce Willis is getting on in the years and if they can cast a new actors as young John McClain, someone to take over the role for a new generation of Die Hard movies, they could stretch the franchise out for another run of (probably terrible) films. It's Hollywood's way. The thing is I don't think a Die Hard prequel (call it what you will: Year One, McClain, Die Hard Babies) is necessary, and not just because the last movie, A Good Day to Die Hard, was terrible, but because we already had the best unofficial Die Hard prequel we could get: Speed. 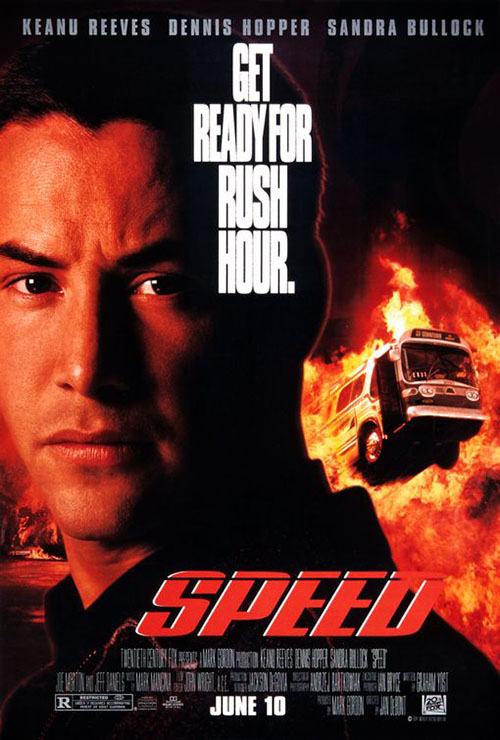 I know what you're probably saying: Keanu Reeves is no Bruce Willis, and normally I'd say you're right. Released in 1994, Speed came out when Keanu was still known for playing a dumb surfer, like in the Bill and Ted movies and Point Break, or for suffering through accents he should never have attempted, like in Much Ado About Nothing and Bram Stoker's Dracula. What he hadn't yet morphed into was one of the best action stars of this generation. That would come later with his turns in the The MatrixA speculative future story with superhero and anime influences, The Matrix not only pushed viewers to think about the nature of their own reality but also expanded what filmmakers could do with action sequences and filming. It then launched a series of movies, games, and comics, creating a franchise still talked about today. and John WickStarted as a tale of redemption and then revenge (in that order), the John Wick series has grown to be a adynamic, reliable action series that doesn't skimp on the hard hits and gun-toting thrills, elevating Keanu Reeves as one of the greatest action stars ever., but Speed showed us he could play an action heavy without too much of that surfer swagger. His character here is much more in line with John McClain than "Ted" Theodore Logan, and he guides the movie in a way a more overblown performance never could.

For anyone that hasn't watched action movies in the last thirty years, Speed takes place across two days. The first act starts in a skyscraper where a mad bomber (Dennis Hopper) has exploded the cables and safety mechanisms on an elevator. SWAT is called in and two of the officers, Jack Traven (Reeves) and Harry Temple (Jeff Daniels), go up to the elevator to see what they can do to secure it just in case the bomb decides to blow it up before he gets his money. After finding a way to save the people on the elevator (despite the bomber's best efforts) the two cops then chase down the bomber, leading the mad men to seemingly blow himself up.

We then pick up the next day when Jack is heading to work. Suddenly a bus near him explodes and then the mad bomber calls -- he's still alive and he's placed a bomb on a bus somewhere in L.A. If the bus slows down under 50 MPH it will explode. If any of the people get off the buss it will explode. If the bomber isn't paid by 11:00 AM it will explode. Jack has to get to the bus, secure the passengers, and find a way to stop the bomb before the bus, and all it's people, explodes. And then, of course, he has to find the terrorist (because these movies always end with a confrontation between the greedy terrorist and the hero cop).

The reason I think of Speed as a Die Hard prequel is because, first and foremost, it's a great Die Hard-style film. It's probably the least clone-like of all the "like Die Hard but..." films to come out in the era, primarily because it takes place across three different locations, three different major set pieces. Plus, in this film there's only one terrorist instead of a whole team. And yet, despite these differences, the meatiest part of the movie is Die Hard through and through. 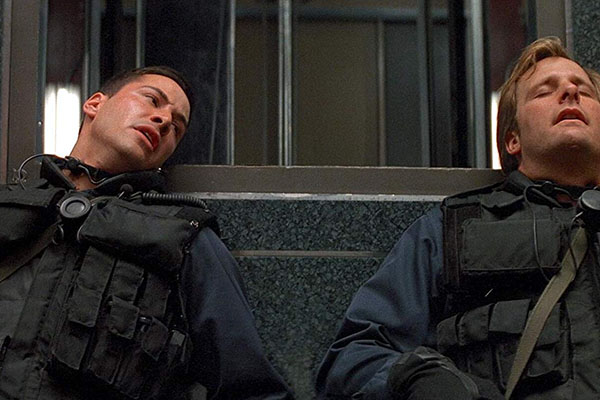 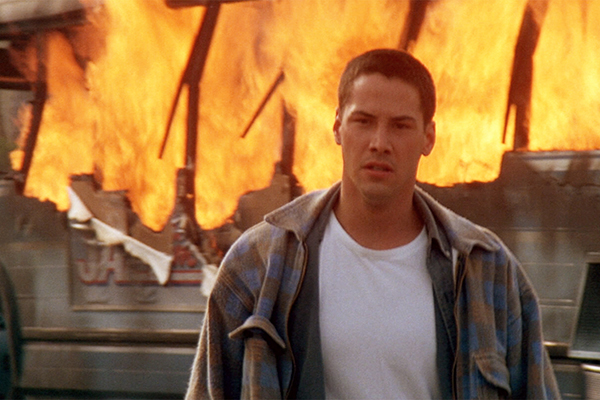 Think about it: an everyman cop is stuck in a close-quarters situation trying to keep people alive while a scenery-chewing mad man holds them all hostage. Set it during Christmas and the Die Hard parallel would be explicit. Now, sure, Traven is less gritty, less down-on-his-luck than McClain, but that just plays into the fact that this could be McClain early in his career. He's still green, still itching to do the right thing, and he hasn't been through a ton of these incidents (because somehow John McClain is always stuck handling this bullshit) to get beaten down by the world just yet. He even has a love interest, Annie Porter (Sandra Bullock), who could be the early version of Holly Genaro (nee McClain) until her John gets fucked over enough that they grow apart.

I mean, that's a reading you don't have to take but, through that lens it does show that we already have the right kind of movie for a Die Hard prequel. Of course, we're still talking about Speed 25 years later not just because it has parallels to Die Hard (that you can read into) but because the film is so good. Of all the Die Hard clones to come out it's probably the best of the set, hard hitting and action packed with a pace that (like the bus at the center of the film) keeps pushing forward relentlessly. This film knows its action sequences and, even during what should be quiet moments, like just driving down a stretch of road, finds ways to constantly keep the bus in peril so audiences sit on the edge of their (bus) seat the whole time.

Grounding the movie is Reeves, of course, giving a great, understated performance. His Jack Traven is still louder and more brash than the characters Keanu would eventually become known for, namely Neo and Wick. But here that makes him more human, more likable; he's not completely closed off like the relentless bogeyman John Wick nor does he have to act detached and above it all like Neo eventually would become. Jack is a real person, a solid character stuck in an intense and near-impossible situation, and Reeves lets those aspects show on his characters just as much as he does the green and gung-ho aspects. It's a tight balance to maintain, a tricky character that could come across as too egotistical, too full of himself, but Reeves manages to play Traven just right.

Of course, it helps that Bullock's Annie is there to ground and humanize him. Keanu gets to be the action star here but Bullock showed why she went on to be a darling of Hollywood, starring in a crap ton of romantic comedies for a few years after this movie. There's a sweet, personable quality to her character, something she doesn't overplay and make to loud or brash. She has great moments here, emotional and real moments, that sell her as a someone stuck on a bus, likely to die, but just trying to help keep everyone alive for as long as she can. Keanu gets the face on the poster but I think Bullock's co-starring turn is what really makes this movie. 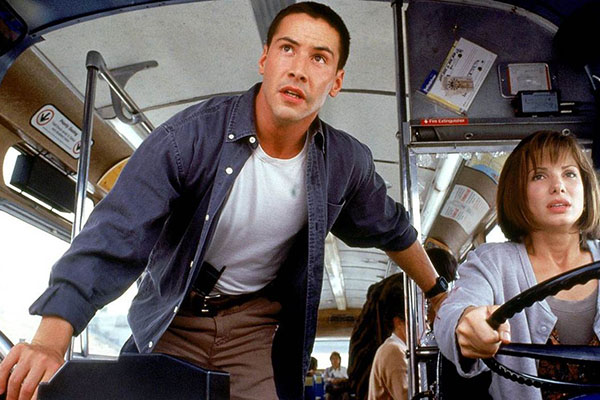 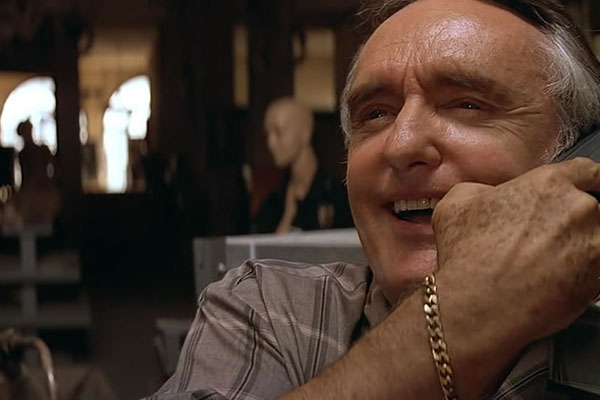 Of course, the villain also helps. A movie like this needs a charismatic, scenery-chewing performance, and for the era very few actors could do that as well as Dennis Hopper. Hopper, like Gary Busey, could play crazy like none other, but unlike Busey, Hopper could ground the characters and make them seem like real people (not blasted out evil space cadets like Busey). That's the trick of Hopper performance: while he's just as greedy as Hans Gruber, and just as crazy as a bag of cats, he's still has a relatable quality. Hopper is mad as hell, but there's something in his eyes, in his composure, that makes you realize he's still totally there. His so sane he's mad in the other direction and willing to do anything to get his way. It's a brilliant performance even if he's overshadowed by Reeves and Bullock (the problem with playing against these two actors in roles designed just for their talents).

Really, whether you agree with me about how easily Speed could slot into Die Hard canon, you have to agree that it's a fine piece of 1990s action film making. This is a movie designed for popcorn consumption, a grand hero-vs-villain piece of cinema with great action and solid performances. It had a magic, like Die Hard, that was hard to duplicate (with it's own terrible sequel, Speed 2: Cruise Control) and oft imitated. If anything, Speed showed how the formula could be stretched and extended, probably helping to keep the "like Die Hard but..." genre alive and kicking for years to come.