A Take Over of the Presidential Plane

1988's Die Hard was a smash hit film. Although considered a holiday movies by many (including most of the staff of this site), it was actually a summer blockbuster, a big money maker released in July. It not only launched the successful Die HardThe 1980s were famous for the bombastic action films released during the decade. Featuring big burly men fighting other big burly men, often with more guns, bombs, and explosions than appear in Michael Bay's wildest dreams, the action films of the decade were heavy on spectacle, short on realism. And then came a little film called Die Hard that flipped the entire action genre on its head. film series (currently spanning five films with a sixth movie, or maybe prequel series, to eventually follow) and turned Bruce Willis into an A-list star, but it also spawned an entire genre of films: "Like Die Hard but..." Not all of those films were successful in their own right, but some managed to ape the groundwork of the Die hard films while finding ways to be new, inventive, and strike a chord with the viewing public. 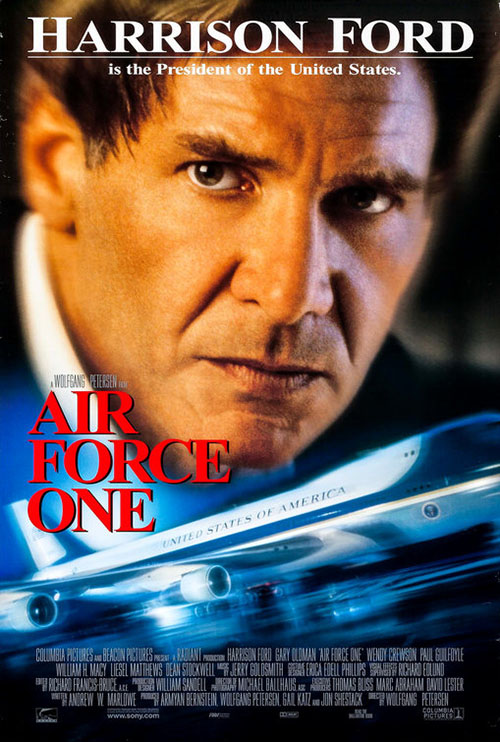 Released nine years after the original Die Hard, the Harrison Ford-starring Air Force One feels like a merger of the Die Hard series and the popular Harrison Ford duo of Jack RyanStarted in 1984, the Jack Ryan series (often called the "Ryanverse") has spanned multiple books and several (loose) Hollywood adaptations. Featuring the title character, Jack Ryan, and sometimes his son, Jack Ryan Jr., these adventures tell tales of espionage, government cover-ups, and boyscout-like devotion of the good ol' U.S. of A. films. It has everything you'd expect from both those sets of films -- Pro-America Rah Rah politics mixed with tense, tight battles between one man and a boat load of terrorists. When it gets going, the film really works, but there are moments where the whole mess starts to pull apart at the seams and the film doesn't always feel as good as the sum of its parts. It's easy to see why this movie was a crowd pleaser when it came out, but you can also understand, after viewing it, why the film isn't talked about much anymore (not the way other "like Die Hard but..." films are).

In the movie, President James Marshall (Ford), during a state dinner in Russia, announces a new zero-tolerance policy for terrorist organizations. "We will no longer sit idly by and let terrorists yada yada yada..." kind of speechifying that works because it's delivered from the tough and grizzled Harrison Ford and when Ford says he's done taking shit, you believe it. After the dinner speech, which is a rousing success without (almost) everyone in attendance, the President and his staff along with First Lady Grace (Wendy Crewson) and First Daughter Alice (Liesel Matthews) board Air Force One to ride home to Washington D.C. Unfortunately for everyone on board, a group of terrorists -- led by Egor Korshunov (Gary Oldman) -- are able to infiltrate the plane as fake reporters and, within minutes of reaching Washington air space, the terrorists have taken over the plane and captured all on board. Their goal: the use the hostages are leverage to get their true leader, General Radek, released from prison so he can topple the Russian government.

From the outset the film has that Jack Ryan vibe, with Ford channeling his version of the character for this performance. There's a certain understated quality to his performance in the movie, like Ford's Matthews is trying to summon the ability to take on these evil men despite being a desk jockey his whole like, a quality he also had in the Jack Ryan series. Of course, as it's eventually revealed, Matthews was a military man, one who served with distinction in active war zones and wasn't just some desk jockey, so the early scenes of Matthews being hesitant and afraid don't quite jive with the rest of the film and his characterization. 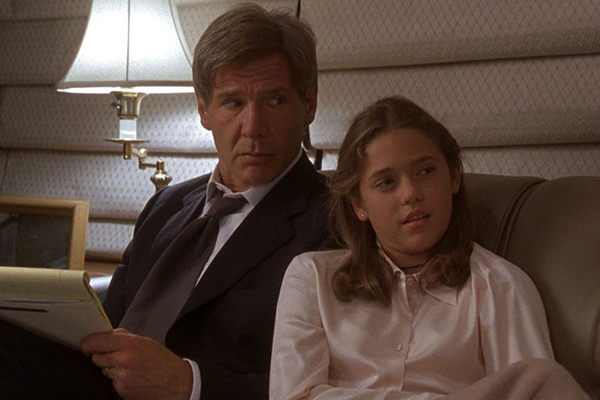 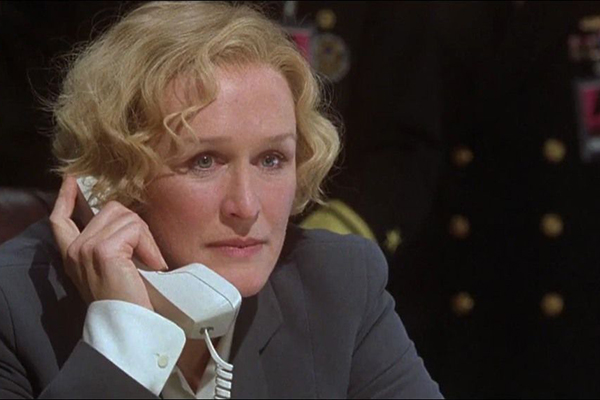 Things work much better once the terrorists are revealed, Matthews has gotten some blood on his hands, and the close-quarters game of cat-and-mouse really begins. This is when the movie takes on that Die Hard energy and really starts to sing. Admittedly the parallels aren't entirely one-to-one: Matthews has the might of the military (subbed in for the police from Die Hard) on his side, and Matthews has a great relationship with his family, all of which makes this feel more Jack Ryan than Die Hard. Honestly, knowing that the character of Jack Ryan eventually became president in the book series, it wouldn't surprise me if this film was originally slated to be a Jack Ryan film and then they changed it during development.

However it worked it, this film really is much better as a Die Hard clone. The tense moments, when the film has the President battling terrorists in the hold of the plane, dodging them by sneaking through cabinets and passage, are some of the best moments in the movie. The film knows how to handle action, especially in these tight quarters, keeping the focus on the main players for long shots, only cutting to get a different perspective on the action (and not to cover up bad stunts or shoddy effects). There's a quality to mid-1990s action that was lost in later years when hyper-frenetic cutting and shaky-cam became the norm. The action here is focused, tight, and (generally) well done.

Also working to the film's advantage is the villain, Korshunov. The terrorist has a simple goal and he remains on point the whole time. While Oldman doesn't have the scenery-chewing slime of Alan Rickman, his villain is one of the better ones in this genre of film. The fact that he has his goal and never waver is part of what works so well; he's a frothing believer, a true acolyte of General Radek, and true believers can't be reasoned with or talked down. Once the terrorist plot starts it won't end without the President dead or Korshunov in the ground. This isn't a petty crime but a real plot with real stakes for these characters and that makes the plot of the film feel so much more impactful.

That said, there are issues with the film even when it gets into full Die Hard mode. The film regularly cuts back to Washington D.C. where Vice President Kathryn Bennett (Glen Close) her war room plot ways to save the President. However realistic it might be for the rest of the U.S. Government to try and involve themselves in the saving of the most powerful person in the world, the fact is that these scene pull us out of the action and just pad the run time. The Presidential Staff aren't able to have much affect from the ground, mostly standing around waiting while the President does all the work. Their scenes could easily have been excised, instead having the staff on the plane do the same job and it would have had the same effect. Better, really, because they're in the thick of it and actually matter. 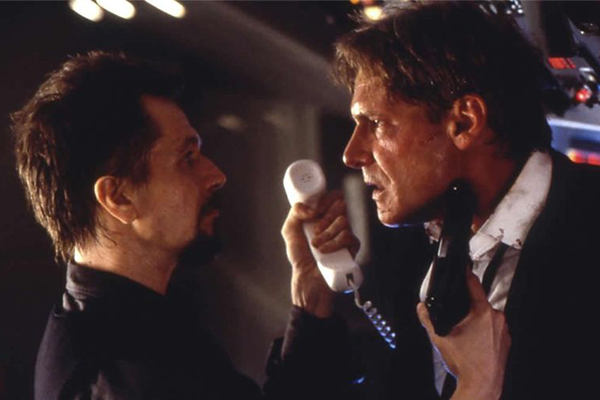 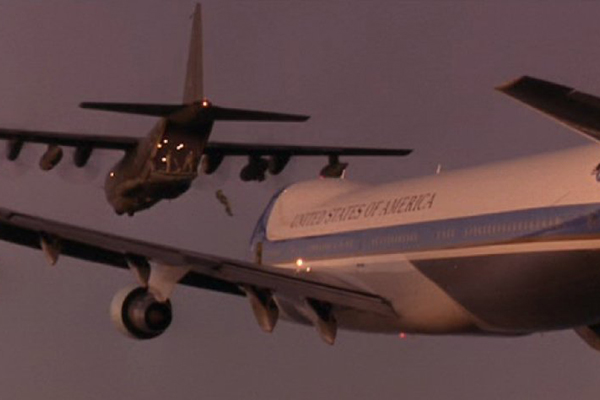 That all ties into the "Rah Rah Yay America" politics of the film, which this movie inherits from the Jack Ryan series. All the focus is on the U.S. President even though the film is as much about the Russian government and its political prisoners. If they film were going to regularly cut to anyone, it should be the Russian government as this is their mess along with the U.S. Government. But the Russians are barely seen, even when the plane is flying near their air space. Everything is solved by the Americans -- their plans, their guns, their ingenuity -- creating a very myopic view of this threat to international politics.

That coupled with some truly shoddy green screen and CGI, leaves this film in a weird place twenty years later. It's not a very pretty movie anymore having aged in design about as well as it has politically. The bones of the movie are still strong, but Air Force One overreached, going for the big "America Rocks" finale when now, twenty years later, that message rings hollow.

Air Force One has it's charms -- it's still, at its core, a solid Die Hard clone and it's anchored by a take-no-shit performance by Ford that still works. But everything around this tight action movie, from the special effects to the ineffectual war room and the shoddy politics, age this film faster than many other clones in the genre. It was fun to go back to this movie again and see how it holds up but now, having noted that it really doesn't hold up, I struggle to think if I'll bother watching it again.