On the Fourth Day of Die Hard, My True Love Gave To Me...

There's a certain amount of shared DNA between the Die HardThe 1980s were famous for the bombastic action films released during the decade. Featuring big burly men fighting other big burly men, often with more guns, bombs, and explosions than appear in Michael Bay's wildest dreams, the action films of the decade were heavy on spectacle, short on realism. And then came a little film called Die Hard that flipped the entire action genre on its head. films and the Lethal Weapon series. Both series started a little over a year apart -- Lethal Weapon in March 1987 and Die Hard in July of 1988 -- but I wouldn't say one influenced the other. It's more like both came about because of the boom in action films in the late 1980s and early 1990s. And, yes, the both prominently feature Christmas. 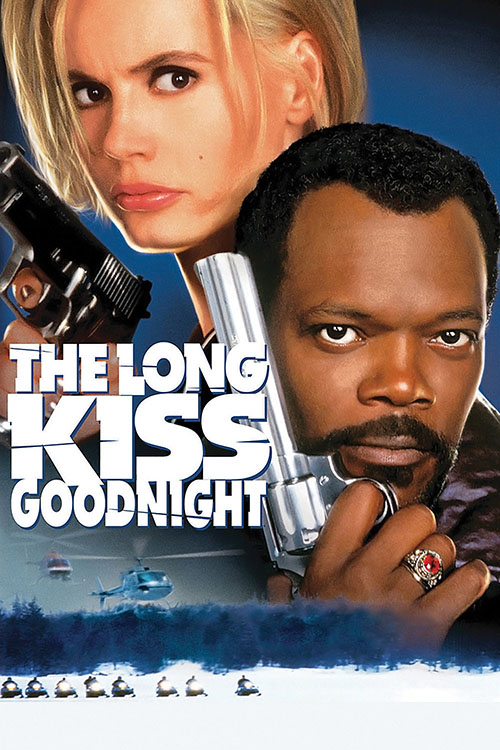 I actually haven't touched upon the Lethal Weapon series much on this site (in large part because I absolutely detest Mel Gibson for being one of the worst humans currently living on the planet), but it's fair to say that, much like Die Hard, the Lethal Weapon series influenced many other films to come along. It popularized the "buddy cop" genre of action films, cementing the idea of a good cop and bad cop that work together and get things done in spite of the rules (or, really, because they end up breaking so many of them). Hell, from a certain perspective, the Die Hard films ended up morphing into Lethal Weapon style movies, pairing the grizzled old John McClane (in the Murtaugh role) up with one young punk after another (taking over as the Riggs stand-in).

But we're not here to talk about Lethal Weapon specifically. Instead I want to touch upon Shane Black, the writer of the first film in the series who would go on to have a solid (if not entirely prolific) career in Hollywood. Black is known for his writing prowess, with many of his scripts becoming solid earners on the big screen (or, at the very least, dependable cult classics). One of his best, and most under-appreciated, is the 1996 espionage film that fits, oh so nicely, in this "like Die Hard, but..." genre that we've been developing here on Asteroid G. The film is like the perfect intersection of Lethal Weapon and Die Hard, all mashed up together. And it's so damn good.

In the film we're introduced to Samantha Caine (Geena Davis), a school teacher who, eight years earlier, woke up in the hospital, pregnant and with no memory of who she was before that very instant. She's basically relearned everything, essentially starting a whole new life because she had no memory of her old one. She's remained curious though, so over the course of the eight years she's hired one P.I. after another to try and find out anything about her old life. That's how she ends up working with Mitch Henessey (Samuel L. Jackson), the latest in the string of private investigators, but the first to actually turn up something about who she used to be.

Following one single breadcrumb (and following a nasty car crash that ends up jogging a bit of Sam's memories), the two end up on a road trip the leads to some agents (literally CIA agents) from her past. Soon enough they're getting shot at, tortured, and nearly killed time and time again, and all of that leads to Samantha regaining her memory. As it turns out, "Samantha Crane" never existed, it was just a cover for her real identity of Charly Baltimore, wet-work agent for the U.S. Government. But now the agency wants to make sure she stays dead so she doesn't get in the way of their scheme to grift money from the U.S. by launching a faked terrorist attack (with very real consequences). It's all about terrorism and money in this genre of films. 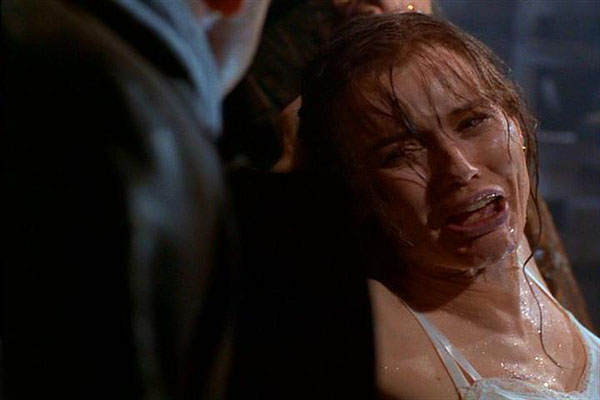 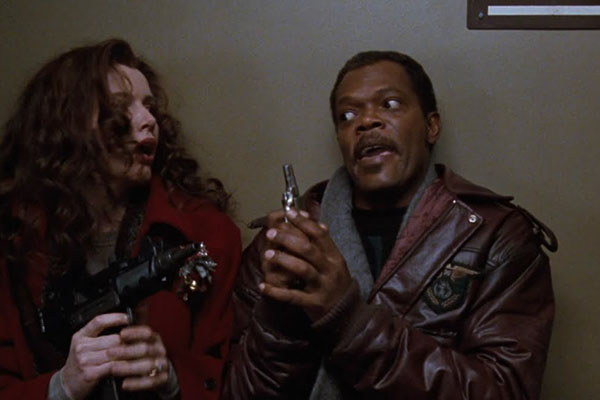 You can tell a film is a Shane Black movie because it features two things: a lot of action, and Christmas (I'd argue that's one of the big reasons why The Predator sucked as it swapped out Christmas for Halloween, for much worse results). The writer has started he likes the contrast between all the action and an otherwise "heart warming" time of the year, and it is true that there's a dissonance between the two sides of his films that work for the film, and not against it. That's the case even here, as we have the agent-turned-housewife preparing the the holiday on one hand, and then her absolute kicking ass on the other; the main character is the writer's on instincts given form and personality.

Of course, it takes the right actress to sell this character and Davis nails it. She's not an actress I give much credit to, admittedly, as I just haven't jived with many of her films (even though, honestly, she's been in a ton of nerd-worthy films, included one of my all-time favorites, The Fly). She's absolutely great as the dual role of Sam and Charly, able to nail both sides of the character (sometimes within seconds of each other). In different hands this character wouldn't work, but Davis absolutely kills it.

Giving some of that connective tissue between this film and Die Hard, we have Samuel L. Jackson (who, of course, starred alongside Willis in Die Hard With a Vengeance). I wouldn't say Jackson plays a character very different from his performance in that third Die Hard; just about every character he plays is some variant on Jackson himself, but that's part of why he's so great. I could watch Sammy J. in just about anything, and he's so enjoyable here as the down-on-his-luck Henessey.

One thing holding the film back, though, are the villains. For much of the film their exact plan is shrouded, leaving them as just a vague threat. We have a couple of faces to attach to the organization, such as Craig Bierko's Timothy (who is vaguely charismatic but never really a properly sociopathic threat), but overall we're never really sure what the bad guys want or why. Their plan only really comes out in the last act, long after we needed to know it or understand anything about what they wanted. Compare that to the first Die Hard where, even though we don't know everything about Hans Gruber's plan, we at least have seen them kill a bunch of people and violently take a building hostage, so we know they mean business. We don't know whether who or what is behind anything here for most of the film, leaving is vague threats and little else to go on. 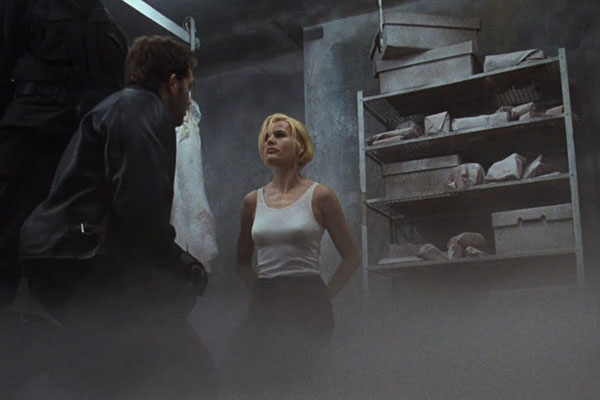 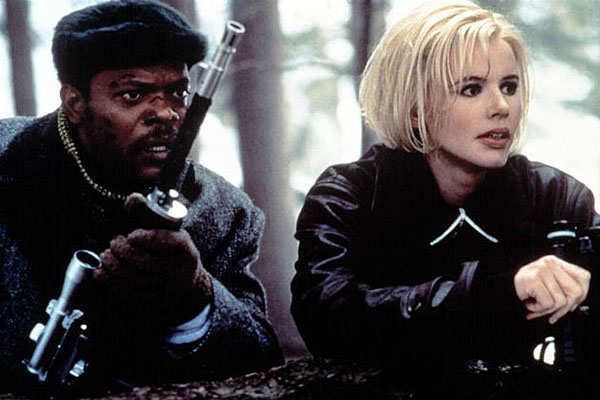 That puts the onus not on the interplay between good guys and bad guys but on finding out the real truth about Sam (aka Charly). For a good while that actually does power the film, because Davis and Jackson are so good, but once we know who she is and what her past really was, the film looses a little momentum. If we had a better idea about the villains and their plans, it might have added a bit of threat to the whole film. We would have needed Sam to get her memory back so she'd be ready to take on the bad guys, instead of having the film suddenly shift gears into a plot right out of a Die Hard film (terrorist threats and all) in the last act.

And yet, even then it's enjoyable in its own way. It becomes a little dumber, a little less about the characters, but what it loses from the first two acts it makes up in big, dumb, 1990s spectacle. It morphs fully into the kind of Lethal Weapon/Die Hard film we expect from the era, and while maybe that's not a good, it has it's own kind of delightful spectacle to ride on.

Overall then, the film is fun for what it is. It's aged pretty well considering when it was made, and it's one of the few films in this nascent genre to feature a female lead (something the director, Renny Harlan, feels might have actually hurt the film since people wanted "big, male action heroes" during that era). Of all the various films we've reviewed for the "Five Days of Die Hard", this is certainly one of the most enjoyable. Maybe it needed just a little more editing, and could have used a touch of massaging (especially in the last act), but when it comes to mid-1990s action films, this is certain one of the best. It might not have done as well as it could at the Box Office (netting just slightly more than is $65 Mil production budget), but that just makes it one of the hidden gems of the genre, for sure.