It's interesting to think about how a film like the 1986 The Fly came about. If it were made today there would probably be Internet commentators lamenting the film "ruining my childhood" even though the original was a horror film and no child should have seen it at the time. Admittedly, 1958's The Fly isn't all that scary in retrospect but for a young and impressionable child I could see how it might be. Someone will always complain about a remake at this point. 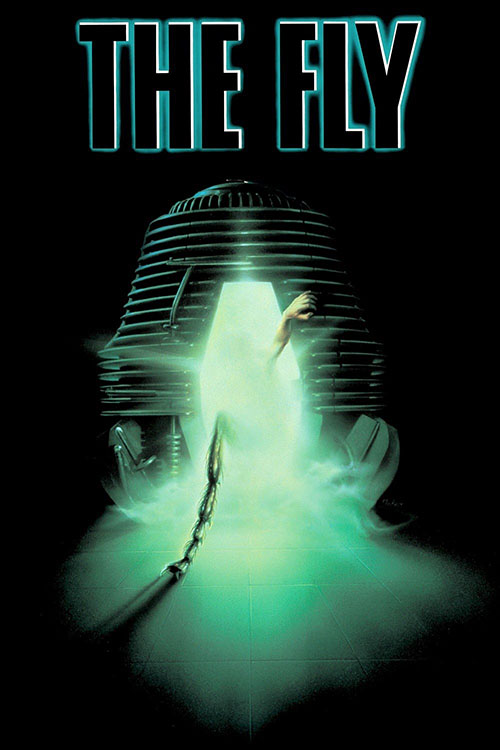 But when it came out there was very little (if any) discussion about "what an abomination a remake will be". Maybe there wasn't as much love for the original film at the time (although certainly the success of this remake helped to bring the original back into the public consciousness), but fans generally seemed okay with a remake happening, especially considering the film they eventually got. In short, this film, spearheaded by horror legend David Cronenberg, is a masterpiece of body horror, one of the greats of the sci-fi/horror genre and a must watch for anyone that loves these kinds of film.

The film, as it eventually came out, is pretty different from the original film (and even the early drafts of the script written before Cronenberg came on). While the original movie dealt with a husband and wife dealing with the tragedy of his failed experiment (which gives him the head and arm of a fly while a fly gets the tiny arm and head of a human), this film ditches all of that, basically keep just the idea of a fly getting into a teleportation experiment and merging with the human test subject. Everything after that is completely new and different.

Where the original film stated in medias res after the experiment already happened (and failed), this movie starts almost at the beginning of the story. We get caught in the middle of a conversation between Seth Brundle (Jeff Goldblum), a scientist at a corporate party, and reporter Ronnie Quaife (Geena Davis). Seth says he has an invention that will change humanity (which, from a couple of different perspectives is true), and eventually Ronnie agrees to see it. That's when he shows off the telepods which can teleport matter between them, something he proves with one of her of pantyhose legs.

Her editor, Stathis Borans (John Getz), is understandably doubtful of the experiment, calling it "magician hokum". But Ronnie believes, and she wants to document the whole of the invention. She and Brundle eventually fall into bed, too, which only makes everything that happens all the more tragic. Seth teleports himself when Ronnie isn't around, and unfortunately a fly gets into the machine. The teleporter, not understanding having two different creatures in the device at once, merges the to, adding fly DNA to Seth at the molecular level. Soon, Seth starts to change, growing coarse hairs and getting splotchy skin. But its when his nails, ears, and then teeth fall out that he really realizes what happened: he's not just sick but is being transformed into a giant fly. And he's not sure how to fix it or stop from becoming a monster. 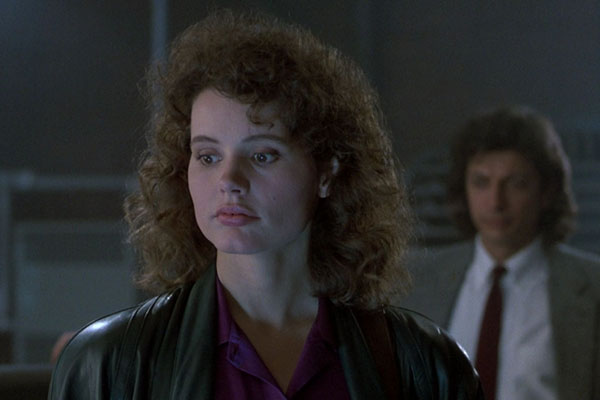 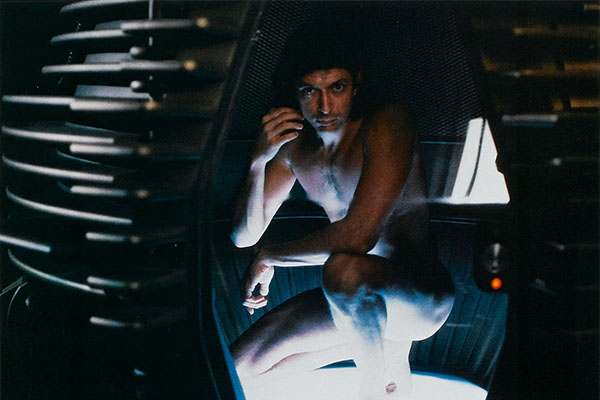 The original film worked off a mystery, keeping its monster hidden while it left you guessing what happened during the experiment Here, though, the film has a mounting sense of the inevitable, a building dread you feel the second Seth steps into the machine and we see a fly in there with him. The movie makes it clear something bad is about to happen even though, at first, Seth seems perfectly fine. The lengths the film goes to document his transformation, though, are pretty staggering.

Credit to Goldblum, he buys in to the whole transformation, letting the makeup artists cover him in more and more layers of thick latex and the process goes on. He turns from a studly bit of man meat (well, as much as Goldblum ever could be) to a walking, pulsing sack of pustules and hanging skin. It's gross, but Goldblum is in it. It's his movie and even under all the makeup he still commands the screen.

Of course, credit to the makeup artists (and the ideas of Cronenberg himself) for getting the look of the film just right. Just having him transform wouldn't be enough if it didn't look believable but, even now, 34 years removed from when the film originally came out, the makeup effects (and other CGI for a few basic moments) really hold up. And, as a credit to the Blu-Ray release, this film looks absolutely gorgeous even for what it is.

Of the two leads, I don't feel like Geena Davis was quite as strong in this film. She's great in the early scenes when she's dealing with study Goldblum and just has to play the romantic lead. But once Seth begins to change and she has to convey all kinds of harsh emotions, it feels like Davis is just a little out of her depth. There are a few moments where she fights against the Brundle-Fly, or when she's weeping over him, where she's more comical then believable. Pulled me out just a little... but then the Fly got even worse and I was back in it. 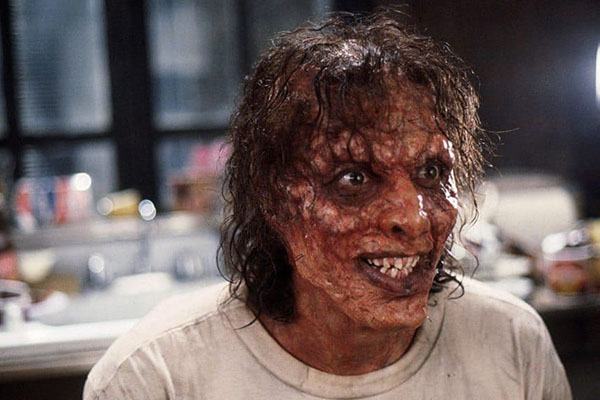 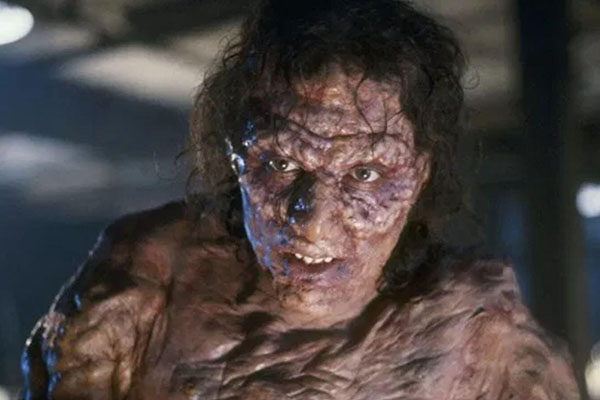 In comparison to the original film this is a master class in actual horror. The original is a mystery with a bit of body-horror thrills, but this film goes all out, really mucking around in the gross-out horror while bringing some legitimate thrills. By the last act, when Seth is more fly than man, the film really just starts tearing it up (quite literally in places) and you're grossed out and amazed. It's so foul and so awesome.

Really, there aren't a lot of films like this version of The Fly. About the only other one I can think of is another sci-fi/horror release just a few short years earlier, John Carpenter's The Thing, and that's another master-piece of mind-fuck body horror. That I consider both films to be in the same league shows just how good The Fly really is. It's great, its messed up, and it will leave you just a little queasy and very horrified. What more do you need out of a horror movie?