On the Third Day of Die Hard, My True Love Gave To Me...

In the early 1990s, every action film needed to be either Die HardThe 1980s were famous for the bombastic action films released during the decade. Featuring big burly men fighting other big burly men, often with more guns, bombs, and explosions than appear in Michael Bay's wildest dreams, the action films of the decade were heavy on spectacle, short on realism. And then came a little film called Die Hard that flipped the entire action genre on its head. or Lethal Weapon. Coming out two years earlier, the first Die Hard helped to create an entirely new sub-genre of action movies while two years before that the first Lethal Weapon gave new life to the buddy cop action/comedy sub-genre. And then there was The Last Boy Scout, which essentially merged the two films into a single film. It is also, it should be noted, a complete mess. 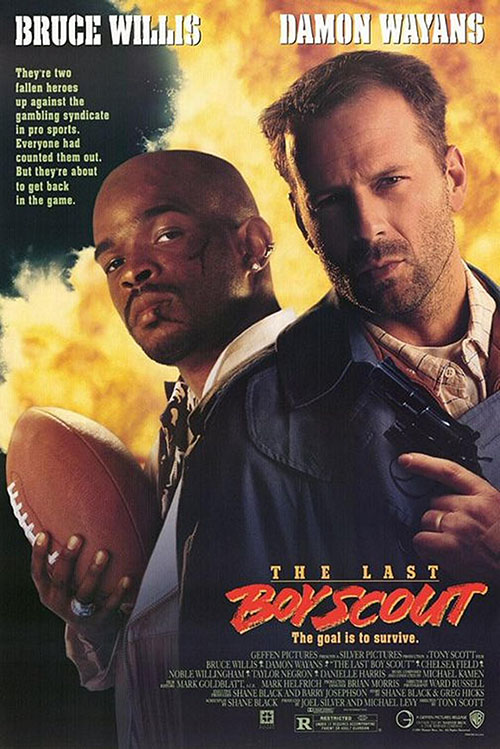 Watching The Last Boy Scout, it's easy to see the bones of the film come together. Shane Black, writer of Lethal Weapon wrote this script soon after the success of that movie. Bruce Willis signed on, and naturally, with a star like that on the film, he wanted the movie to function like a standard "Bruce Willis movie" (stars will very often make their own demands, have their own thoughts on a project they're on, especially when they're had back-to-back blockbusters like Willis did with the Die Hard movies). Plus, when you factor in power-producer Joel Silver and mega-director Tony Scott, you end up with a lot of people pulling the film in various directions. That's what's been reported about the film after the fact, and it's easy to see how that made for a terrible movie just watching the film in action.

In The Last Boy Scout, Willis plays Joe Hallenbeck, a former Secret Service agent, now down on his luck Private Detective who drinks and smokes too much and has a family that hates him (aka, the "McClain" role). He gets sucked into a case protecting a stripper, Cory (Halle Berry), who's being harassed by some guys. Cory is dating Jimmy Dix (Damon Wayans), a former starting quarterback for the L.A. Stallions (because the NFL didn't sign off on this movie). When Cory ends up dead, Dix and Hallenbeck have to team up to figure out why she was killed. They end up mired in a plot of blackmail, frame jobs, illegal sports gambling, and government bribes. And it all comes together at a football game where a lot of people die and somehow our heroes get away scot free.

Normally I can write pages about the plot of a movie but The Last Boy Scout stops me cold simply because it barely has a plot. The big "mystery" doesn't really kick into gear until over 30 minutes into the movie (once Cory is dead and Jimmy and Joe have time to bond, share their life stories, and yell at each other and Joe's family). Once the big evil plot is revealed the villain shows up almost as quickly, and then it's just a lot of the heroes running around, trying not to die while killing all kinds of bad guys in the process, right up until they have a chance to stop the bad guys and send all the terrorists home in body bags. It is, viewed from that angle, exactly like a Die Hard movie.

Honestly, watching the film, I didn't really see the bones of the first Die Hard movie so much as viewed the film as a rough draft of the third film in the series, Die Hard With a Vengeance. As you'll probably recall, in that movie, Willis's McClane is paired up with a smart (and smart-assed) African American man who doesn't like McClain much at all but eventually develops a bond with him as the two run from one terrorist plot to another. It's very similar, in that regard, to The Last Boy Scout, except the third Die Hard is much, much smarter. 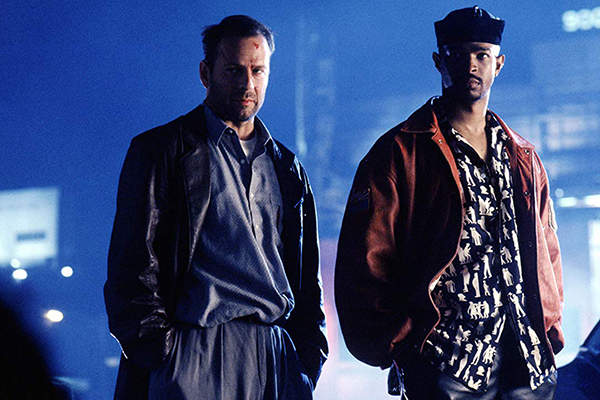 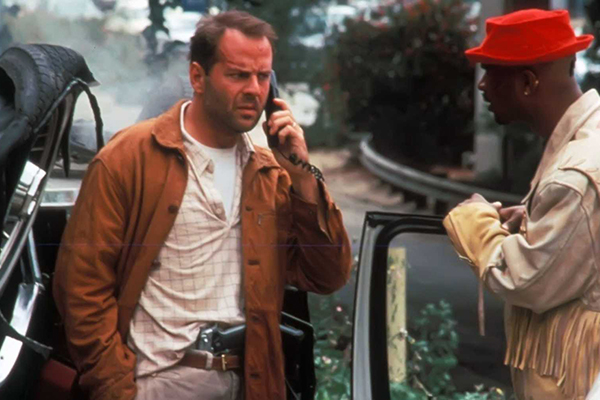 The big issue with The Last Boy Scout is that the main terrorist plot, an attempt on the life of a Senator who won't take a bribe to rig a vote in the Senate to pass a bill legalizing sports betting, is too convoluted to really work. When you view the Die Hard films, the best movies in the series have simple, straight-forward plots that don't get in the way of the action but also don't require a flowchart to explain. The villain is greedy, he wants money, and anything else he says or does is a lie unless it gets him to that money. Here, the villain of the piece, L.A. Stallions owner Sheldon Marcone (Noble Willingham), has to show up part-way into the film to explain the whole thing. Despite Willis's character being a private eye (and, supposedly, a very good one), the only way we can figure out the story is if the villain lays it all out, point by point. That's bad writing.

I mean, it's not the only issue with the movie, but the fact that the film has a story too dumb to make sense without a character giving up the entire script in Cliff Notes format says something. But even if the story were good, there would be other issues with the film; namely the main characters. Willis, of course, plays the character of Hallenbeck like every other Bruce Willis character (because, lets face it, Willis doesn't really have much range). Willis can sell a character like this, and he tries his best, but the character as written is such a mean spirited, high-horse riding asshole that you never really bond with him. He yells at everyone, shits on everything, and the only reason he's the hero is he's the one working the case (and everyone is shooting at him). Wayans's Dix really isn't much better, a washed out football player he gets high constantly and really doesn't contribute much to the proceedings aside from quips. Dix is carried entirely on Wayans's charisma, and even that it's not enough.

Not that anyone else in the movie is much better. Joe's wife, Sarah (Chelsea Field), is barely sketched and one-note, while his daughter, Darian (Danielle Harris), is even more bitchy than Joe. The only character we actually like at all is Mike (Bruce McGill), Joe's best friend (who's also screwing Joe's wife) who then dies in the first 10 minutes of the movie. Everyone else is either a jerk, an idiot, or both, and that goes for all the cops and the villains. There's no one in the cast of characters to match the smarmy sliminess of Hans Gruber nor the devoted evil of Egor Korshunov (from Air Force One). If there were anyone in the film to chew scenery and give us a performance to hate maybe our protagonists would have come off better. At least the film would have been more interesting.

Even the action isn't all that great, with a few set pieces that don't really thrill and not much else to speak of. Most of the actions scenes are done in a weird slow-mo with lots of inter-cut action and staggered angles. It's the kind of filming you'd expect from a less confident director, someone that didn't know what they were doing with the action so they tried to cover it up with a lot of filming tricks, trying to obscure their inadequacy. Here, though, we have Tony Scott, one of the great action filmmakers (although I'm not a fan, a lot of people swear Top Gun is a fantastic movie). I have to wonder what was going on here because you'd expect better, more comprehensible action from Scott. 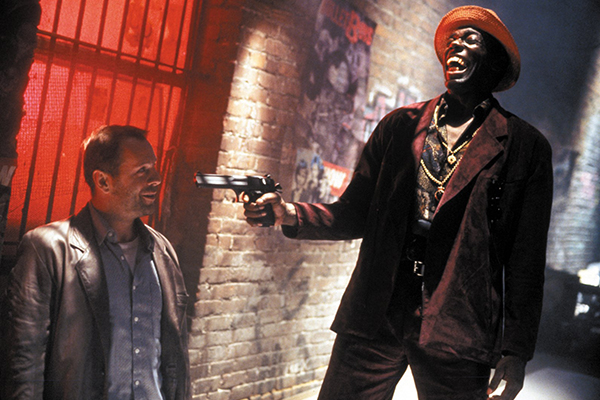 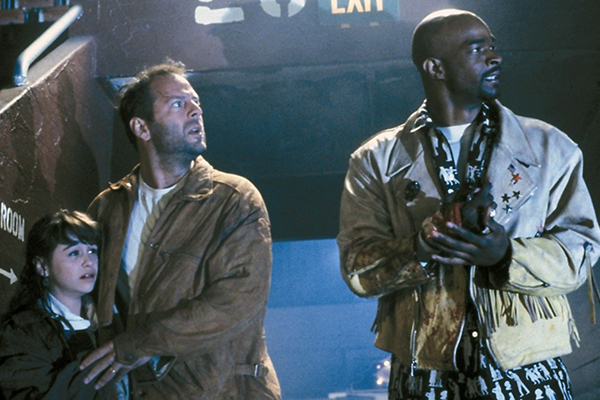 Nothing about this film hooked me so, for much of it, I was picking apart everything I was seeing, from the fact that the opening football game, played in the pouring rain, would have been called because the field was too wet, to the fact that all the carnage the guys were causing would have gotten them arrested, not commended, even if they did get the bad guys in the end. Nothing about this film makes sense, and none of it was good or realistic or interesting. It's a complete waste of an hour and a half, which is just sad considering how much talent was involved.

I remember, back in the day, seeing The Last Boy Scout over and over on HBO. It ran constantly for years and, when it was originally on second-run cable, I thought it was a good flick. Either I've grown up a lot in my tastes or I simply got so used to how dumb the movie was I stopped seeing anything bad about it. I was locked in to The Last Boy Scout, never to escape. It's true that the film can easily slot in among the Die Hard movies, acting like an off-brand version with an on-brand star. The fact is, though, that even if it fits the genre it's still a terrible movie. Do yourself a favor and skip this movie if you've never seen it before -- there are better Die Hard clones out there.