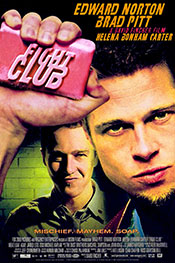 It's hard to summarize Fight Club, as saying too much about any particular part of the movie gives away too much of the movie. Fight Club is the kind of movie you experience as it plays out, with each part bringing you along to the next, fluidly, and knowing too much could ruin the first-timer's viewing experience.

Let That Which Does Not Matter Truly Slide

The gist of the movie (at least to start) is that our nameless Narrator (who usually goes by Cornelius, if he goes by anything at all) has insomnia. He has insomnia because he really doesn't like his life. He can't let go of all the little things that bother him, and ends up keeping himself awake from the stress and worries of everything.

As the movie progresses, he tries to find a way to make his life meaningful and, in the end, just let go of that which should not matter.

I Want You to Hit Me as Hard as You Can

Fight Club is a stylish movie, one of the rare stylish flicks that also has substance. It's a movie that you experience (I once heard it described as a movie that isn't so much watched as downloaded), and much of the credit for how well the movie works, how fluid it is, has to go to the Director, David Fincher. He manages to orchestrate a feast for the eyes, a movie that takes the conventions of movies, and storytelling, and purposefully uses them in unorthodox and creative ways to further its own agenda.

Make These Your Primary Action Items

Not all credit, though, should go to the director. The performances in the movie guide the ride along it's tracks seamlessly. Often, you'll watch a movie and go "man, everyone in the movie was great, except...". There's almost always that one performance than doesn't quit jibe with the rest of the flick.

Thankfully, that's not the case in Fight Club, everyone, from the lead performers (Brad Pitt, Edward Norton, and Helena Bonham Carter) to the smaller performances (such as Meat Loaf giving life to the sad, awkward character, Bob), are in fine acting form.

If there's a stand-out performance, I would say its Edward Norton. Narrators are tricky characters to play in movies. Having a running inner-monologue for the movie reminds many of the cheesy noir flicks of old, and even when done well, tend to pull the view out of the movie, not absorb them further into it. Edward Norton, however, is able to convey emotion through his voice work, and (some credit to the director as well), makes the voice work function as another part of the cinematic experience, and not as an anchor pulling you out of the movie.

After Fighting, Everything Else In Your Life Got the Volume Turned Down

Fight Club isn't for everyone, mind. It's a great flick, but it's brutal, too. Admittedly, many movies have come out since Fight Club's release that have been more violent, certainly more over the top. Fight Club doesn't glorify any of the violence in the movie (in fact, many of the shots are done to show the brutality, not the glory, of the fights). Even with that, though, many people will not enjoy this movie because of the violence.

I have heard it described as a guy flick, and while I don't think that's entirely right (my wife and my mother both enjoy the movie, as two examples), I can see why some women wouldn't be interested in it (although they probably wouldn't mind seeing Brad Pitt and Edward Norton getting all man-sweaty). In many ways, the movie is about men redefining themselves in modern society (or redefining society around themselves). It's not a testosterone laden fight-fest, but it's not a happy fluffy movie either.

That said, if the violence doesn't bother you, the viewing experience is worth the "price of admission" (especially when you can rent the flick for about four bucks at most rental stores). It's not going to be for everyone (I've heard a number of people say they hate some of the twists later in the movie, and generally think the way it is made is just dumb), but even if you don't enjoy the whole movie, I still think it's worth seeing at least once to experience the way the movie was crafted.