Another Tomb, Another Lady to Raid It

For a while there it felt like the Tomb Raider series was ever present. When the first game came out (in, wow, 1996? Really?), the character of Lara croft suddenly appeared everywhere. I had friends that were totally into her game, although I think it was mostly because she was a hot woman (well, by 1996 polygon standards) they could ogle while they played her game. It doubt it was for the game itself because, honestly, that first game was a tired slog, a mix of action and exploration elements that didn't play all that well at the time and haven't aged well at all in the years since. Whatever the reason her first game, simply called Tomb Raider, was a success, it went on to spawn a whole media franchise. 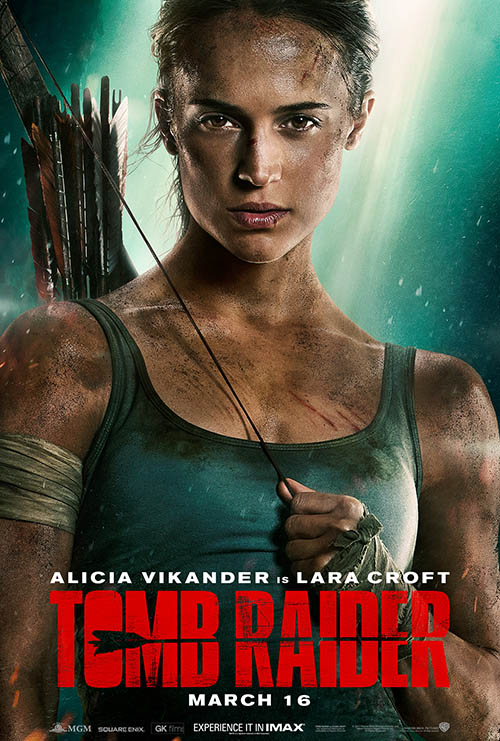 That includes movies, two of which featured Angelina Jolie (everyone's favorite Maleficent) in the lead role of British explorer Lara Croft. Those movies were pretty garbage, but in a fun way, like a low-rent National Treasure (which itself felt like a low-rent Indiana Jones series starring everyone's favorite overblown crazy-man, Nicolas "My Eyes Are Bursting out of My Eye Sockets" Cage). The movies did fairly well at the Box Office, although not well enough to warrant a third movie, and then everyone seemed to forget those films exist (much like they forgot about every Lara Croft game after the first).

Recently, though, Lara has been on an upswing, with a trio of well-received adventures games, starting with the 2013 Tomb Raider. There was also the puzzle-action game starring Lara and an ancient warrior, Lara Croft and the Guardian of Light, which itself had few related iterations, and now Lara is once again a presence on the game market. Eventually a new Tomb Raider movie had to happen, and it did, back in 2018. This time starring Alicia Vikander in the role of Lara Croft, Tomb Raider is based on the 2013 Tomb Raider (and not the 2001 Tomb Raider or the 1996 Tomb Raider), as our heroine goes to tombs... and raids them.

Lara (Vikander) is a woman on her own having given up a potential life of comfort and riches after her father died, forsaking her "birthright" to be her own woman and live like a street rat in old London town. After a run in with the cops puts her back in the spotlight of the family business, Lara decides to pick up where her father left off and follow the clues to an ancient tomb of Himiko, ancient Queen and bringer of death. Her father, Lord Richard Croft (Dominic West) believed there was a powerful relic in the tomb that, should it fall into the wrong hands, could have led to the tragic deaths of most of the world. The relic was too powerful so he took that secret to his grave.

Naturally, then, Lara decides to go right to that island (with the help of newfound friend, Lu Ren, played by Daniel Wu) and track down her father and this relic. Of course she stupidly stumbles into the machinations of rival tomb raider (I'm sure there's a union for raiders of tombs), Mathias Vogel (Walton Goggins), a nasty little man who doesn't care of the world, it's people, or the danger this relic could impose. His employers, Trinity, want the relic and he wants the money they've promised, so that's that. Lara is the only one that can figure out how to raider the tomb and Vogel wants what's in the tomb, so you can be sure there's going to be a confrontation as both forces fight for the future of humanity. 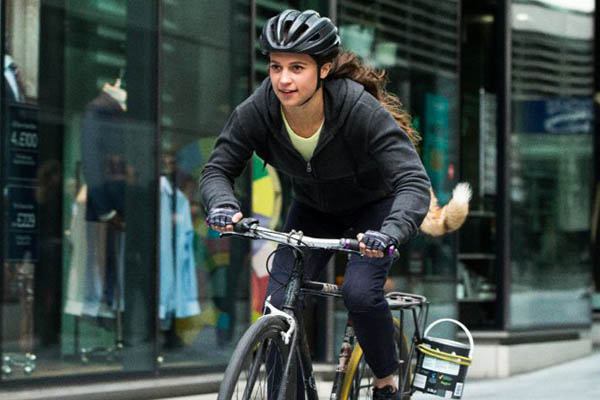 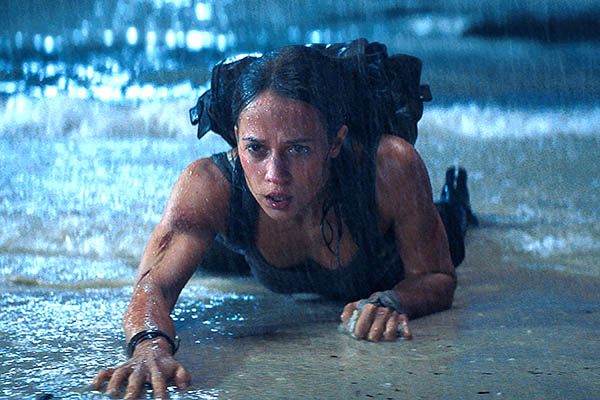 There's a certain level of silliness to the whole concept of Tomb Raider. This isn't because a woman shouldn't be able to do this job but more because this job shouldn't exist at all. The Indiana Jones movies made it look like archaeology is all about finding a secret treasure vault protected by traps and then venturing inside it to gain the prize at the end (see: Lost Arc, Raiders of the; Last Crusade, Indiana Jones and). That's the story model the Tomb Raider games built themselves upon, which worked in a game because video games generally remove logic and doubt. A woman going into a cave, fighting dinosaurs as she activates puzzles to find Aztec riches is as silly and makes as much sense as New York plumbers going down pipes to fight mushrooms and dinosaurs. Silliness is inherent to video games. Movies, though, especially live action movies such as every Tomb Raider so far, require a certain level of realism. While we can accept a video game character diving into a cave to find riches, we have a much harder time believing any single real human could do this same feat, let along that these kinds of treasure vaults even exist in the real world at all.

This is the first disconnect the movie has to try and get past, and for a while it does a decent job of it. We see Vogel and his team of people slowly digging from place to place, working the terrain to find the tomb, like an archaeology team would. Sure, they're evil and they're using slaves to do the job, but they are working it in something approximating a proper fashion. But then Lara wanders in, magically finds the location of the place (in minutes) that this team has been searching for (over seven years), and then it becomes another Indiana Jones clone with puzzles, silly traps, and a McGuffin at the end. And that's where the movie loses me because, for all the realism it tries to build in the first two thirds of the movie (and isn't always successful at) it can't quite escape the fantastic roots baked into the game series that spawned it.

Of course, the movie is also more than willing to let Lara do one stupid stunt after another without taking nearly the amount of (probably fatal) damage she should have. The number of times she should have died in the film from falling off something, or the times she should have been horribly concussed, should have had her arms or legs ripped from their sockets, and all the times she should have just been mauled by the damage she took, are too numerous to count. She takes more wounds that John McClain and a Terminator put together and yet, somehow, comes out of it with only scrapes and bruises. Girl should be dead, is what I'm saying, but she isn't. She lives while everyone around her dies, and that's the biggest knock against the realism of this series.

I'm not saying movies have to be realistic either. Lord knows I love the The Fast and the FuriousStarted as a film about undercover policing in the illegal street-racing community, this series has grown to encompass a number of different genres and become one of the most bankable franchises in the world. for no good reason I can explain, and as those movies went on they got dumber and less realistic. I can accept the lack of realism in those films because the movie doesn't take what it's doing seriously. The first time (in the first movie) that Dominic Toretto pops a wheeling in his car you have to stop and say, "oh, okay, this is that kind of movie." Tomb Raider, though, plays everything so serious, never really cracking wise as its heroine goes from death defying stunt to deadly fall. If the movie had been willing to have fun with itself, to say, "hey, this is all pretty dumb, really," it could have worked better. Then it really would have resembled an Indiana Jones movie instead of just seemingly being in the same genre as that series. 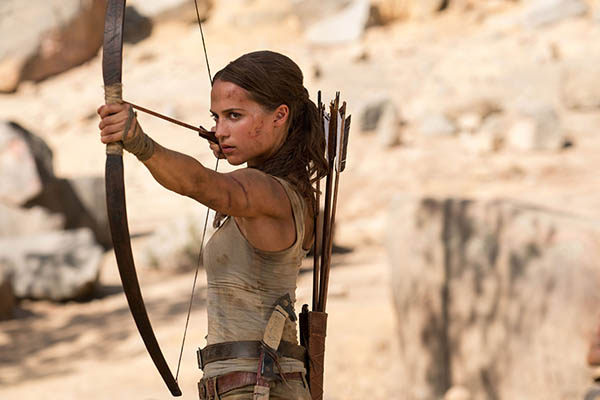 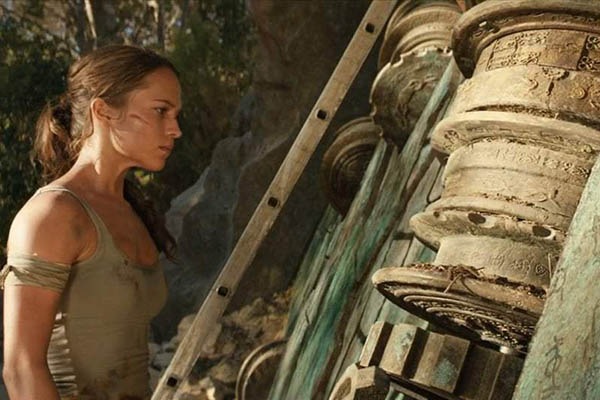 And I think that's the real issue I had with this movie. It was well crafted, well-acted (in large part because of Goggins who is always delightful in every slimy role he plays), and decently well put together (without too many glaring moments of bad CGI). What it lacks, though, is fun. Fun is what drives the Indy movies, is what kept the National Treasures and the original Tomb Raider films light and breezy, but it's sorely lacking in the newer Tomb Raider. For as game as Vikander is, for all the serious stunts the movie wants to do, it never gives you any reason to have fun in the process.

The reboot games of the Tomb Raider series are pretty dark and serious, but because they're games you can find moments within to have fun. The movie, taking away the control from the character to tell a linear story, fails to find a way to inject fun into its interpretation of the story and fails because of it. The movie did well enough to warrant a sequel, potentially, so maybe we'll see if next time the film can actually find fun with all its death-defying wizardry.