The Marvel Cinematic UniverseWhen it first began in 2008 with a little film called Iron Man no one suspected the empire that would follow. Superhero movies in the past, especially those not featuring either Batman or Superman, were usually terrible. And yet, Iron Man would lead to a long series of successful films, launching the most successful cinema brand in history: the Marvel Cinematic Universe. has certainly been in a weird place since the end of Phase III (and the "Infinity Saga") for the franchise. The question many fans have asked, more than once (and sometimes on this site) has been: "where is this franchise going?" We have yet to see a clear cut, franchise-spanning villain, someone we can expect to motivate all the heroes to come together to battle for the fate of all existence. Instead we've seen a lot of people get introduced, a lot big ideas bandied around, but not a lot of stories that really seem to connect with anything else that's going on. It's... confused, to say the least. 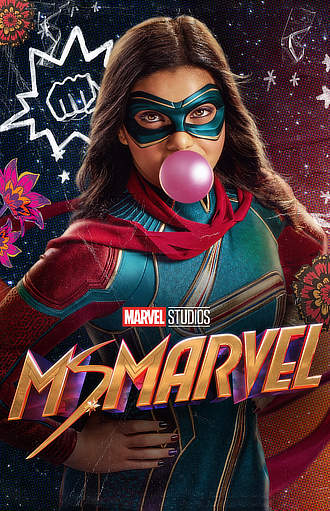 The best part of Ms. Marvel, the latest Disney+ TV show to join the MCU is that it doesn't try to connect with anything bigger. It acknowledges that the larger universe exists (including making the lead heroine a fan-girl of Captain Marvel) but doesn't try to be something more than it is. This is a small-scale superhero story focused on a young heroine just trying to figure out who she is in a big, big world. But that's also it's biggest weakness. We're now 12 stories into Phase IV, with no sign of it stopping, and to have yet another adventure that sits apart from everything else is starting to make it seem like there's absolutely no direction for this franchise at all, Ms. Marvel included.

A lack of focus, frankly, is something that holds this series back, but in its grand scheme as well as episode-to-episode. Make no mistake, Ms. Marvel has a lot of great things going for it -- a fun concept, a stellar cast, and a fabulous creative team at the helm -- but it also seems to unnecessarily meander along, never quite finding its footing until the season is almost over. This is actually a problem a lot of the MCU shows have had, a lack of direction that makes it hard to stay focused on the story. Ms. Marvel gets a lot of things right but it still doesn't quite rise to become truly essential viewing, which is a real shame.

The show focuses on Kamala Kahn (Iman Vellani), a normal, 16-year-old Pakistani-American girl who wants nothing more than to hang out with her friends, Bruno (Matt Lintz) and Nakia (Yasmeen Fletcher), while professing her unending fandom for Captain Marvel. When a convention is put on in town celebrating the AvengersMarvel's answer to DC's Justice League, this team features many of Marvel's biggest superheroes working together to protect the world and avenge its evils., Kamala and Bruno just have to go. Kamala wants to enter into the Captain Marvel Costume Contest, putting on the costume she and Bruno designed (along with a bangle she found in the attic of her family's house). Her parents aren't at all keen on her going out to a "party" where a bunch of boys will be hanging around, so Kamala sneaks out and, with Bruno, has the time of her life at the con. Oh, sure, some trouble happens when she suddenly taps into unknown powers via the bangle and nearly brings down the house but, wow, it was a great convention.

Suddenly realizing she has magical powers (she can create solid objects made of light, including creating light-based expansions of her own limbs), Kamala realizes she has to do something with these gifts. She has to become a hero, like her own hero, Captain Marvel. But there are sinister forces at play, a group of beings from another dimension known as the Clandestines. They have a connection to Kamala's family, from generations back, and their secrets might just expose all kinds of history about Kamala's own family. Kamala is going to have to fight to save her family, and her city, from these potentially dangerous beings. 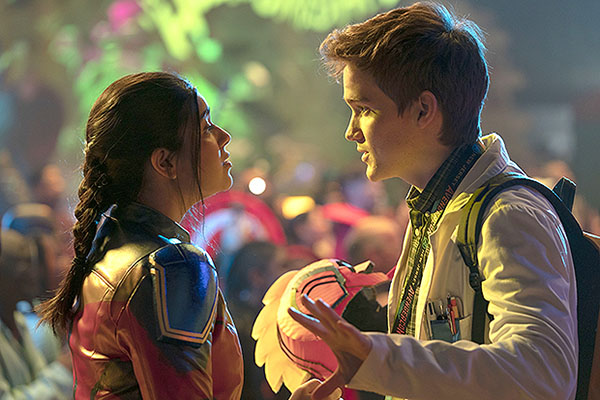 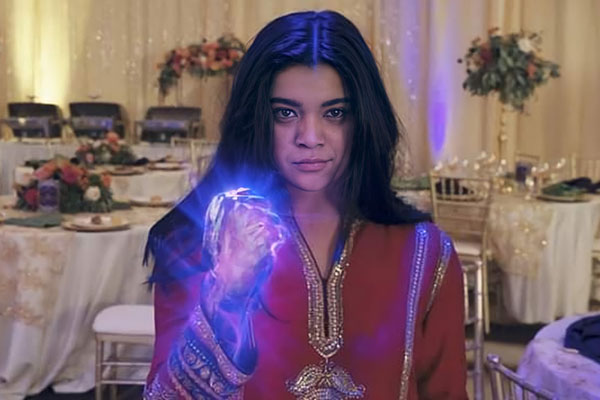 Despite this being a superhero show Ms. Marvel is frankly at its best when it focuses on Kamala, the girl, her family, and the Pakistani group she's a part of. This show delves deep into Pakistani-American culture, giving us a perspective not often seen on TV (let along in a Marvel Studios production). I actually found myself enjoying the times where we could just be around these people, as people, and live their lives with them. This really does have a lived in feel when it comes to this society and I was there for it.

When it turns towards the super-heroic, though, that's when the show stumbles. On her own, Kamala is an interesting superhero, a bit of that young, SpidermanSure, DC Comics has Batman, Superman, and Wonder Woman, but among the most popular superheroes stands a guy from Marvel Comics, a younger hero dressed in red and blue who shoots webs and sticks to walls. Introduced in the 1960s, Spider-Man has been a constant presence in comics and more, featured in movies regularly since his big screen debut in 2002. vibe but from a female perspective. As a character she's great, and her powers are interesting, new and different for this franchise. It's just that Kamala doesn't get a set of villains, or a story to go along with them, that's worthy of her time.

The Clandestines, introduced in the third episode and then off-and-on ignored while the show goes off to focus on other, more important things (like Pakistani-American culture, parties, weddings, and everything else people get up to when they aren't dealing with super-heroics). These characters are barely characters at all, just a collection of goons, most of whom aren't memorable in the slightest (I legitimately couldn't tell you any of their names or what they were good for if I didn't look it up). They're said the be Djinn, and that Kamala is at least part-Djinn as well, but this is a detail that's raised and discarded so the show can do other things. Nothing about these villains sticks, making them ephemeral and kind of useless.

The big opposition our new Ms. Marvel actually faces is from from the Department of Damage Control (DODC). We've seen the DODC show up before (such as in Spider-man: Homecoming), but this is the first time we see them actively going after superheros to "bag and tag" them. Their job is to manage threats, so you can understand why they might be worried when Kamala (and her cool powers) roll onto the scene. But, again, there isn't enough time spent on the DODC agents to make them necessary or interesting. The show has other concerns to deal with to invest enough in this faction of the show. 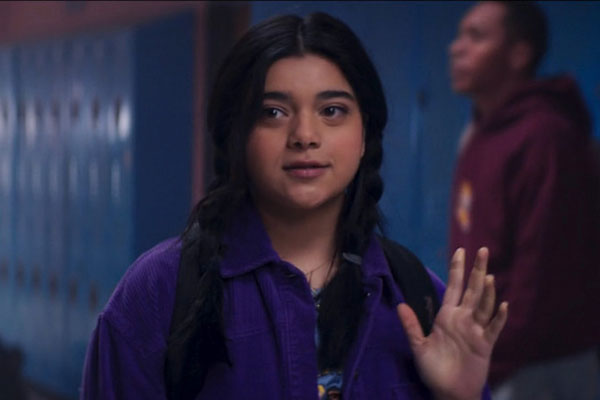 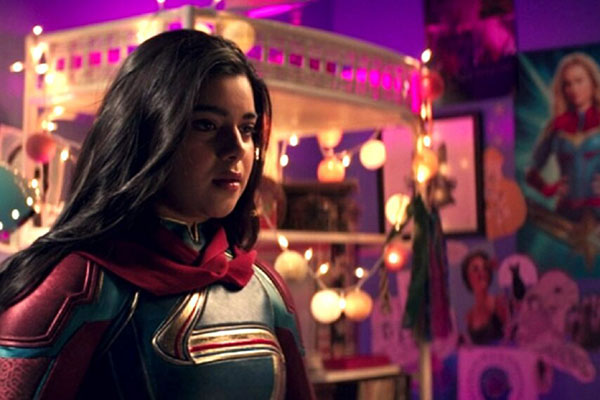 I actually think the show would have been better off if it could have focused on one group or the other. If Kamala had dealt with the DODC, her actions raising the interest of the Clandestines so they could come after her in the second season of the show, or vice versa, that would have let one of the groups have enough time to breath to grow into proper opposition for our young heroine. Doing both groups at once rushed both of their plot lines, leaving them feeling empty.

It sucks because the show does such a good job with Kamala's personal life, giving her a truly lived in world to inhabit, that you wish her super-heroics could have gotten the same level of focus. It's especially sad considering how good this cast is, from the "so charismatic she practically glows" Vellani as Kamala, to Zenobia Shroff as Kamala's mother Muneeba, Mohan Kapur as Kamala's father Yusuf, and the whole rest of the cast. There isn't a bad player in here at all, all of which goes to make her personal plot lines so rich and detailed. This is a series that absolutely nails the characters while failing the super-heroics.

It's weird to say but I think the best Ms. Marvel show would just be a comedy without any real super-heroics. at all. A show just about Kamala and her Pakistani-American life would be a blast to watch and I almost wouldn't miss the Ms. Marvel side of things at all. She's a good superhero but she's a better character. I hope that, in her next appearance, Marvel can manage to balance all aspects of her life better. She's great and she needs a vehicle that her true justice.