If Ant-Man was the MCU's Ocean's Eleven I suppose that makes its sequel, Ant-Man and the Wasp, the Ocean's Twelve of the Marvel Cinematic UniverseWhen it first began in 2008 with a little film called Iron Man no one suspected the empire that would follow. Superhero movies in the past, especially those not featuring either Batman or Superman, were usually terrible. And yet, Iron Man would lead to a long series of successful films, launching the most successful cinema brand in history: the Marvel Cinematic Universe.. Except, that's not really a good comparison. Firstly, because Ant-Man and the Wasp is a good flick (and Ocean's Twelve sucked), but also because it's not really a direct sequel to the first Ant-Man. While it's easy to say that the various movies are sequels unto themselves (Thor 1, 2, 3, etc.) these movies don't happen in a vacuum -- they're part of an interconnected universe, and really act a sequels to (and influence) each other. 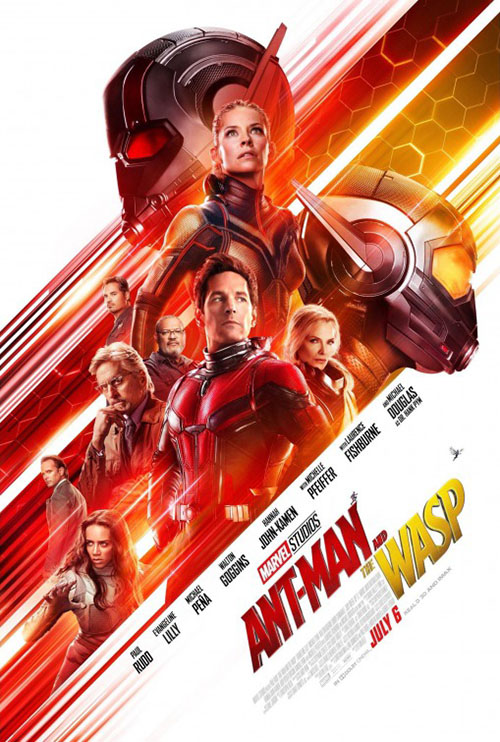 Picking up with the crew long after the events of Captain America: Civil War, we find our hero, Scott Lang (Paul Rudd) stuck at home on a two-year house arrest stint. After the events of Civil War (and the establishment of the Sokovia Accord, regulating super-heroics), Scott took a plea for his actions and has been stuck at home ever since, unable to leave his house and yard. Three days before his stint is over, he has a weird dream about Janet van Dyne (Michelle Pfiffer), the late wife of Hank Pym (Michael Douglas), back in the 1980s. Thinking its unusual to have memories about a woman he's never met, Scott calls Hank (who was the original Ant-Man and inventor of the tech, as you may recall) via a burner phone and leaves a message explaining it.

Next he knows, Scott is waking up in a car with Hank's daughter, Hope van Dyne (Evangeline Lilly). She starts asking him about the dream as, apparently, it could mean Scott is quantum-entangled with Janet and the dream might have actually been a signal from her in the Quantum Realm (which Scott accidentally visited back in the first movie). See, it seems that Janet may not be dead after all, just stuck at a nanoscopic size in this alternate realm, and if the scientists can figure out how to get her, that can bring her back.

Unfortunately there are two outside forces getting in the way of the Ant-Men and their plan to save Janet. First there's Sonny Burch (Walton Goggins), a criminal with aspirations of the Ant-Man tech (so he can sell it for oodles of money). Then there's the mysterious Ghost (Hannah John-Kamen), a girl whose body was infused with quantum energy; she needs the quantum tech to try and stop her body's decay. Unfortunately, if she uses the tech it might kill Janet. The Ants (and Hope as "The Wasp") have to work quickly to save Janet before anyone steals the tech and ruins their chances of ever seeing Janet again.

Despite a seemingly over-stuffed plot, Ant-Man and the Wasp actually moves at a pretty easy pace. While there are a lot of pieces going, it's all balanced neatly with a deft touch by returning director Peyton Reed. Reed manages to put enough focus on each of the characters, illuminating all of them so that none of the principals (heroes or villains) feel like they were left out or underdeveloped. Of course, in the case of the criminal Sonny Burch, you really don't need to know much about him -- he's a bad dude played with style by Goggins. Since he's not super-powered and is only after money, money, money, his motivations are clear and we don't need an excessive back-story. 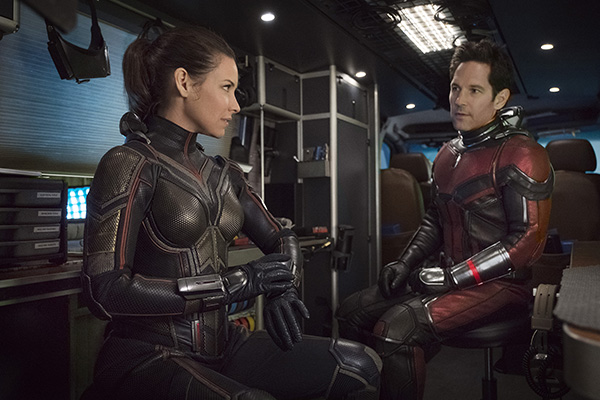 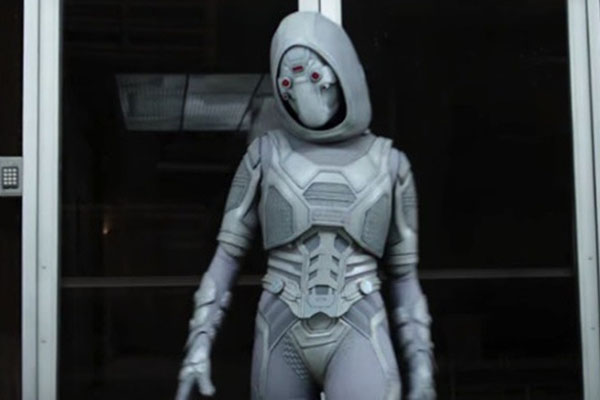 Ghost is a deeper character (and, really, not so much a villain as just a troubled girl), so she's given more screen time (and, really, stands as the primary antagonist -- Burch is there just to liven things up and keep the chaos going). She shows up a couple of times early to give the proceedings menace, and then, when her big character reveal happens, we get just enough back-story to flesh her out and make us actually care about her. It's probably to set her up as an eventual side-character/hero for Ant-Man, but her development works here (certainly better than most MCU villains). She ties in nicely to the whole plot and, instead of simply being a villain out to destroy the world (like so many MCU villains), she actually factors into the story of the heroes. She can play off them instead of the heroes simply having to fight yet another villain, defeat yet another bad guy.

The first film was a caper flick as the heroes attempt to steal from the villain. Here, though, what we really have is a reverse-caper -- the heroes have something important and they have to plot, plan, and improvise their way through the mission as the villains repeatedly attempt to steal from them. The reversal of the basic caper tropes is nice change of pace for the crime genre as well as a good way to avoid retreading the same material -- if this second Ant-Man had just been yet another caper, the formula would have started to wear thin (you know, like it id in Ocean's Twelve).

Of course, the film works so well, too, because it has such a game cast. The three leads -- Rudd, Lilly, and Douglas -- are all clearly having a great time making this movie. Douglas came off as a little stuffy in the first film but here he's more relaxed which lets his cantankerous charm (which, really, he's had through his whole career) come out and shine. Lilly is also a game player, bouncing well off the other characters and getting her on snide remarks in. Of course, Rudd is great and the film uses his skills well, like his "aw shucks" charm and natural ability to play a reaction shot as a joke, putting it all to good use.

That's not to say the movie works perfectly. While I liked the three leads, Lilly isn't given as much to do as Wasp as I would have liked. She's great in the role, no doubt, but despite having co-billing in the movie, her Wasp is still left on the sidelines more often than Rudd's Ant-Man. That's not as bad as all the other characters shoved in here from the first movie, from Ant-Man's ex-wife, to her new husband, and their young daughter, all of whom are here simply because they were in the first movie. They don't really serve any purpose to the plot, not like in the first film, and if they hadn't been included I doubt the movie would have functioned much differently. And the same can be said for Ant-Man's old crew of criminals who, similarly, have little bearing on the plot and little reason to be included in the proceedings. 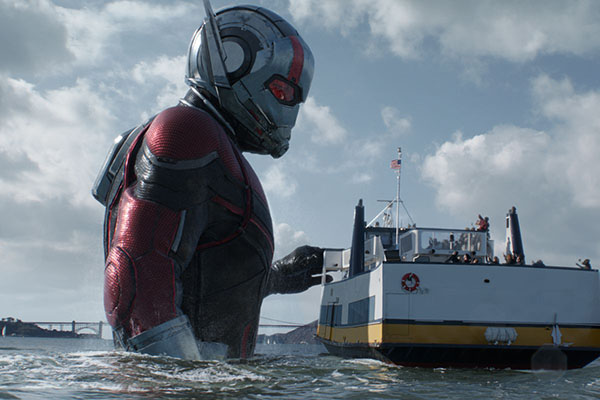 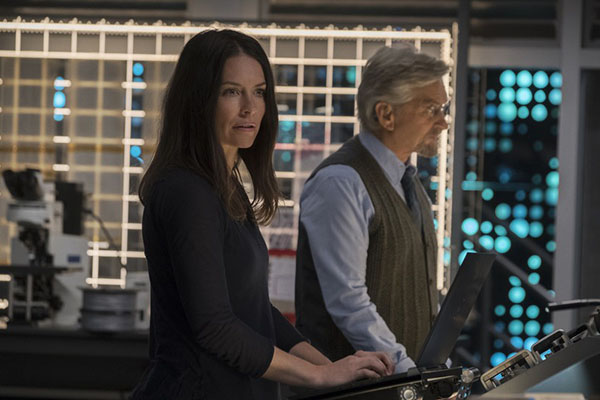 These would be major issues in a bigger, more serious movie, but the stakes in Ant-Man and the Wasp just aren't that high. This isn't about saving the world but a single person, and that works to the movie's advantage. Sure, the plot may be slight, and most of the characters are included simply to hang around and have a good time. But after heavy tones (and downer ending) of Infinity War, Ant-Man and Wasp serves as a light breather for the MCU. This movie works as the anti-Avengers, a break from the weighty themes and a chance to just cut loose and relax. Sometimes it's nice to have that, to just be able to sit back and enjoy a silly, breezy superhero flick. The movie may be a bit of a trifle, but we honestly needed that.