This is the Dawning of the Age of Ultron 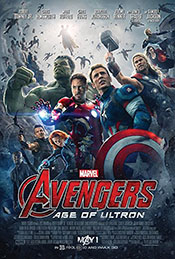 Having just seen the new Avengers movie, Age of Ultron, I figure it's a good idea to give all you movie goers out there a heads-up about the flick so you know what to expect. Before we get into details though, let's get this out of the way up front:

Avengers: Age of Ultron is a very good flick. Very, very good. If you're a fan of the Marvel series you will not be disappointed, in general, by this movie. You may, however, get annoyed by some scenes, you may not enough all of the movie, and you may feel like they could have done more. And, if you're never seen a Marvel Cinematic Universe movie before now, this is definitely not the first one to jump in with (and we'll get to the whys in a bit). It's a very good movie, but it's not perfect -- so long as you don't set your expectations too high, you'll enjoy the movie.

I'm not going to spend this review (and this basically is a review -- I don't need to do one of my series-spanning rants since I've discussed the MCU repeatedly in the past) tearing everything apart showing all the ways the movie failed. That said, there were a few missteps that are worth pointing out.

To begin with, this movie runs at a very fast clip. Part of the joy of many previous movies in the MCU is that you get plenty of time with the characters to get to know them better even if there is all kinds of action going on. Time with Cap as he banters with Black Widow, or goes to visit Peggy Carter in the retirement home. Time with Tony when he's snipping sarcastically along with the kid on some random farm, or grabbing lunch with Rhodey. The quieter moments are some of the best in the series, and while we get a few downtime scenes (like a moment where all the Avengers try to lift Thor's hammer) this movie is mostly action and plot at breakneck (some could even say Quicksilver) speeds.

The movie could have benefited, basically, from slowing down a touch and giving us all more time to breathe before we have to rush off to the next scene. Within the first few seconds we're already starting up the big plot of this movie (the rise of Ultron), and once the villain is revealed (much earlier than I anticipated), the movie is in service to his machinations. Rush here, rush there, retreat, rush again.

Now, some of this could have been because, allegedly, the movie was originally three and a half hours long and had to be trimmed down by a whole hour. If that is the case (and we'll all see when the extended cut comes out on home video later this year) then that means there were probably a number of fine character moments left on the cutting room floor. Many of my complaints here (and further down in this review) could all stem from how much footage could have been removed.

Not that I don't see what they'd have to trim the movie down some. If it really was three and a half hours long, that's a big movie to release in theaters. We're not talking a complaint on the part of the people watching (although not everyone is built for a movie that long). It's more a matter of basic scheduling (time is money): The longer a movie is, the fewer times it can be played in a day. If Marvel wants their box office receipts to be huge (and they do because they're a business) they have to get as many showings in as they can. The more money Avengers 2: Electric Boogaloo can make, the better number they can report for the opening weekend, which makes this movie a more boastable success (and shows just how much farther DC has to try and travel with their movie universe if they want to compete).

And Avengers 2 has to be a success, make no mistake -- the first flick made so much money (crazy, "let's fill a swimming poll full of cocaine" money) that anything less would make the second flick a flop. Hell, I'd be willing to wager that if the second movie doesn't make more money than the first it will still be considered a flop (probably leading to reports like "What did Marvel do wrong with Avengers 2? and "With their first flop, has Marvel's formula run dry?").

So, with so much on the cutting room floor, other issues I had with the movie could be explained away. For instance, there are a number of cameos and smaller appearances from characters that you would expect to be larger. Warmachine gets a few pivotal moments during the flick, but he's largely absent from most of the run time. Falcon (introduced in Cap 2) is even more absent, getting two very small scenes (and, like, one line) but nothing else -- and since they had to pay him no matter how much he showed up on screen, that just seems off.

Maybe it's just my wanting more with these two characters I like (they're both very affable, charismatic characters). But then if we think about people that maybe have only seen one movie in the whole MCU, Avengers 1, it's even weirder. Neither Warmachine nor Falcon show up in that flick, so anyone coming into this movie fresh will be confused by these blink and you'll miss them moments with characters that don't matter much. Why include them if they aren't going to do much or even get an explanation for why they're there?

And speaking of weird oversights, we don't really learn people's names in this movie. Sure we know who Cap and Black Window, Hulk, Iron Man, and Thor are. But you'd be surprised to hear their names very often. Falcon is never named once. I think Rhodey is called out once by his real name and once more as Warmachine. I know these characters, I've seen their movies, but for other people (non-cinephiles) this is one of those decisions where someone could go "who was that again?"

This is even worse for the new characters introduced in this movie: Wanda and Pietro Maximoff (Scarlet Witch and Quicksilver respectively). I think they're only named once in the whole movie so if you miss it then you won't know who they are. Now, don't get me wrong, their backstory is pivotal and you do understand their motivation, but its a two and half hour flick and we get one sold development scene with them. More time is needed to really appreciate these characters.

So the movie isn't perfect. I think expecting it to be, though, misses the point. This isn't the end of an arc (no matter what Marvel may want you to think by calling it Phase II. This is the middle chapter of a larger story: the Infinity War. Even since Thor 2 we've been building up to the Infinity War will all the talk about magic gemstones and universe ending gauntlets. This movie, while self-contained, has to serve to masters -- what came before and what's clearly coming after. Phase III of the MCU is going to be huge (10 movies and counting) and all the groundwork has been setup in this part of the epic. Like any second part of a trilogy (and this is the second part, make no mistake) we always are left wanting more, knowing that we've only just scratched the surface of the larger epic to come.

Now, sometimes that plan doesn't always work out. Need I remind anyone of the Matrix series to see how to fail at making a preplanned trilogy? But this is Marvel. So far they're given us nothing but good movies...

Well, except for Hulk and The Incredible Hulk but those were early in the run and they've course corrected.

What I'm saying is that this movie is good. Avengers 2: More Avenging, Less Filling is a very solid movie that you will enjoy. But it's not the end of an arc, so don't expect it to be. Go to it for what it is (and what it does right) and just accept the flaws. If you go in with the right expectations you won't be disappointed.