A Dark and Spooky Story

Considering how pervasive the Marvel Cinematic UniverseWhen it first began in 2008 with a little film called Iron Man no one suspected the empire that would follow. Superhero movies in the past, especially those not featuring either Batman or Superman, were usually terrible. And yet, Iron Man would lead to a long series of successful films, launching the most successful cinema brand in history: the Marvel Cinematic Universe. has become, with its constantly releasing stable of superhero products, it's easy to forget that Marvel has had an extensive back catalog of horror titles as well. Sure, the superheroes are their bread and butter but horror comics (from all of the major publishers) have been an active and constant part of the publishing universe for some time. Hell, the superhero that arguably launched Marvel's cinematic ambitions, Blade, came out of the classic Marvel Tomb of Dracula horror series. 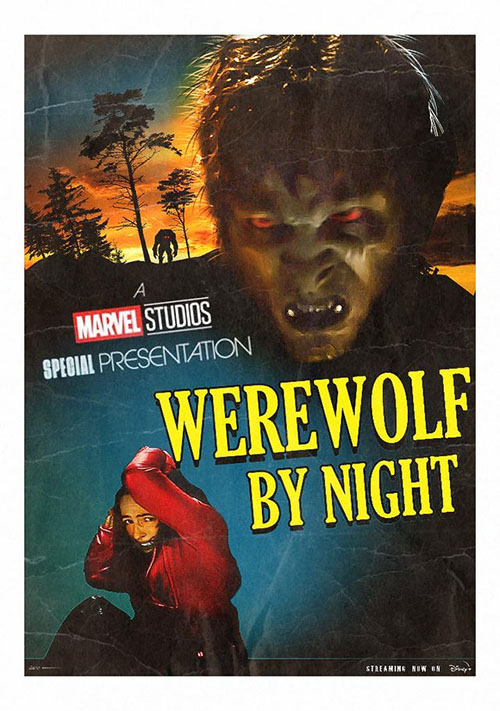 While many viewers may have forgotten that (or simply not known about Marvel's horror titles at all), Marvel thankfully hasn't forgotten. As Marvel has expanded its reach and depth across Disney+Disney's answer in the streaming service game, Disney+ features the studio's (nearly) full back catalog, plus new movies and shows from the likes of the MCU and Star Wars., the studio has gotten more experimental and more willing to push its cinematic universe. It's taken a couple of years to get here but, finally, it feels like Marvel's ambitions for its Phase IV are truly coming to fruition. And if it means more titles like Werewolf By Night, a special based on another of their horror titles, then I'm on board.

Based on the Marvel horror-superhero series, Werewolf By Night, this TV special is really a throwback to the classic horror movies of old, especially those produced by Universal Studios (and their Universal MonstersThis franchise, started off with Dracula and Frankenstein in 1931, was a powerhouse of horror cinema for close to two decades, with many of the creatures continuing on in one-off movies years later. line). The special feels like Marvel's attempt as a grindhouse (and Grindhouse) feature, bringing in all the little touches you would expect from cheesy classic horror. That includes black and white photography, film grain, and cigarette burns on the stock. This film goes out of its way to be a classic horror pastiche, which does for the most part work. However, that same pastiche makes the few times Marvel goes in for its MCU ways stand out even more. It's a good attempt, and a very watchable Halloween special, but it just slightly misses the mark at being truly great.

In the Halloween special we're introduced to the secret society of Bloodstone Manor. The head of the society, Ulysses Bloodstone, had died sometime earlier, without a rightful heir to his powerful relic, the Bloodstone. The Bloodstone weakens monsters, making them easier to kill (among its various other powers), and a proper successor had to be chosen to pick up the mantle (and the stone) and lead the cult of bloodthirsty monster killers into the next era. Among the prospective hunters are Jack Russell (Gael Garcia Bernal), a hunter with hundreds of kills supposedly to his name, and Else Bloodstone (Laura Donnelly), the daughter of Ulysses who never wanted to be a hunter but has come back for the stone to keep it out of the hands of the secret society.

To earn the stone, as per Ulysses's own dying wishes, all of the hunters have to go out into the maze on the grounds of the estate and hunt a monster. The first to kill the monster, and retrieve the stone attached to its back, will become the rightful owner. Except not everyone there that night is working towards the same goal. Not only does Else want nothing to do with her bloodline but Jack also had plans outside of becoming the next leader of the group. And that doesn't take into account that the "monster", Man-Thing (Carey Jones), isn't much of a monster at all and really doesn't serve to be killed. It'll all come together in an explosive finale with plenty of kills and chills to sate anyone's blood lust. 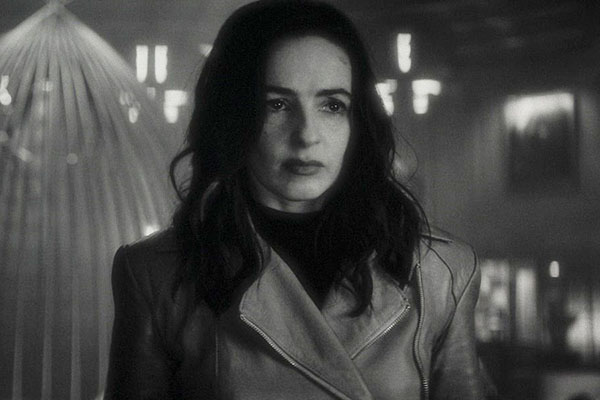 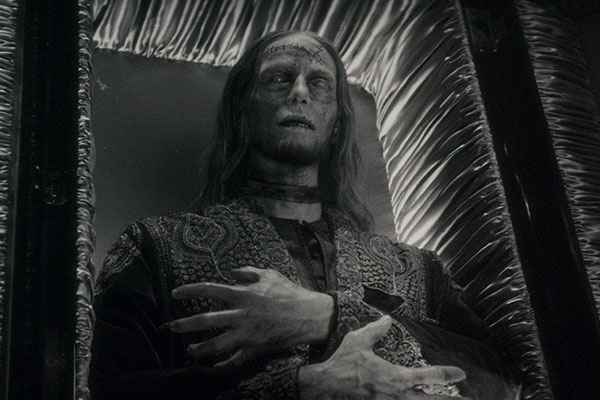 Considering the audience for MCU fare -- children of all ages, essentially -- Marvel has been averse at creating products that would turn off any demographic. Resurrecting their horror characters in the MCU feels like an odd choice, but this special certainly shows a path forward. By aping the style of the classic horror films, back when the Hayes code dictated just what could be shown on screen, Marvel is able to have its horror delights and still share them with the public. It works, in a way, as this film gets to be largely bloodless with still putting on the airs of classic horror.

That's not really a knock against this special, just a note that you can see what the producers were thinking as they went this route for the special. It is watchable, at the same, time, and the production team clearly had a ball designing the throwback style of Werewolf by Night. I certainly felt no small amount of glee watching a special that reproduced all the hallmarks of an era of film I've invested in deeply (because of my other site, Castlevania: The Inverted Dungeon). The production team did nail the style and tone, making this feel like a pretty solid throwback.

And yet, there is a little something missing all the same. Part of the problem with the special is that it runs too short. Classic horror films had a tendency to run about an hour in length, as this special does, and in those films they spent a lot of time on pointless story that didn't go anywhere. This film takes the other tack, completely ditching any real story after the first five minutes so it can end the hunters out to find a monster. This at least keep the film moving but, like with those classic films, it still leaves this special scrambling to fit in all the character development it needed into its hour-ish runtime.

The special gives us a lot of characters, not just Elsa and Jack but also Jovan (Kirk R. Thatcher), Azrael (Eugenie Bondurant), Liorn (Leonardo Nam), and Barasso (Daniel J. Watts). These are all hunters setup to be equals to the task of hunting the monster, but we never really get any character development for them. Else and Jack get some focus (although I'd argue even they don't really come into focus like they should), but there's hardly enough time spared for us to really care about any of these characters, good or bad as they may be, so that when they die (and many of them do) we feel something. They're all just fodder. 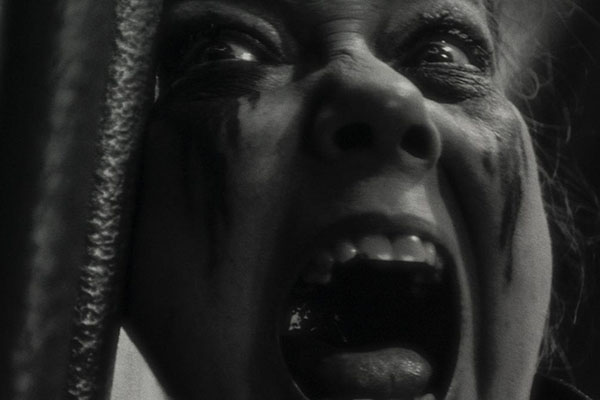 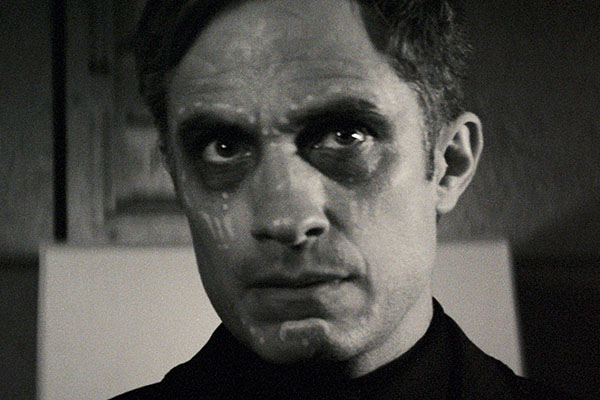 I understand trying to keep the film moving, and I appreciate that this special doesn't get bogged down the way the old 1940s and 1950s movies could. There's still something missing, though. I want to invest in the characters and their setting, none of which is explained in a way that makes it feel like the film cared, and if I can't invest then I find it hard to care. Because Else and Jack are the focus I can appreciate them and root for them as they fight against everyone else, but the special really needed to give me more.

At the same time, while the film tries to play as a throwback to classic films it can't help but insert some glaring MCU touches. Although the film is black and white (for the most part), the Bloodstone is shown with a glowing red energy. This helps it stand out, for sure, but the film doesn't just leave it as some drawn on red light. Eventually its full powers are revealed and this involves a lot of CGI effects. It's looks super fake, even amongst all the faker of the cheesy sets and bad props, ruining the verisimilitude of the setting.

Worse is the monster, Man-Thing. He's rendered with a weird overlay of CGI, making him look even more fake than everything else in the special. It's strange they made the Man-Thing out of CGI at all since our Werewolf eventually shows up and he's done with practical effects (making him more wolf-man than werewolf, if we want to be pedantic). I would have loved to see a rubber-suited version of Man-Thing to accent the cheesiness of the practical effects. Doing him up in CGI feels like it violates the goal of this special.

If we compare Werewolf by Night to the classic horror films of old, it stands head and shoulders above that fare. It's tightly set, has a lot of action, and does give us a couple of enjoyable characters. The production team nailed the style and tone, for the most part, and delivered something very watchable in the process. I can't help but wish, though, that the story could have been fleshed out a little more while all the CGI of the production had been eliminated. A truly well put-together throwback film could have been a masterpiece of Halloween horror. This special nearly gets there but doesn't quite nail the mark. It's still great, but it could have been even better and its sad to see it get so close without actually doing it up right.