The Marvel machine doesn't stop. Ever since the release of The Avengers in 2012, the Marvel Cinematic UniverseWhen it first began in 2008 with a little film called Iron Man no one suspected the empire that would follow. Superhero movies in the past, especially those not featuring either Batman or Superman, were usually terrible. And yet, Iron Man would lead to a long series of successful films, launching the most successful cinema brand in history: the Marvel Cinematic Universe. has been a license to print money for Disney, the corporate owners of Marvel. In that time, the franchise hasn't had a major flop to its name. Yes, there have been some movies that were considered "lesser hits" -- Thor: The Dark World, Avengers: Age of Ultron -- but every movie they've made since Avengers has made at least $500 Mil. Nothing Marvel has done since The Incredible Hulk (the only real flop in the series) has been a dud. 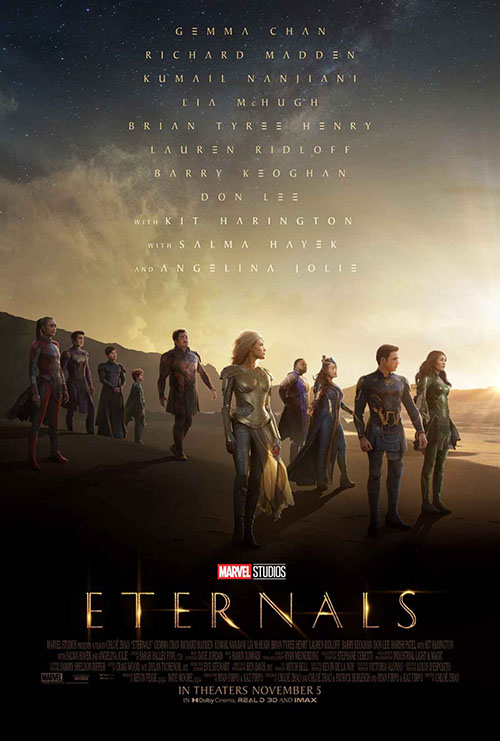 Well, up until COVID. The global pandemic has changes a lot of that. Black Widow only pulled in $379 Mil, and that's was with a known Avenger in the lead role. Shang-Chi pulled in a respectable $432 Mil. But Eternals, this movie tanked at the Box Office. It had a lackluster opening weekend, it crashed and burned quick in the U.S., and it's a total bomb of a film pulling in only... oh... $401 Mil. The general consensus is that this film failed but, in reality, it did just about as well as Black Window with the same budget: $200 Mil. Sure, factoring in advertising and everything else, probably the film broke even but it's not the absolute bomb everyone "says" it is.

Why does everyone think the film was a bomb? Well, past that opening weekend performance (which was likely dragged down by bad initial reviews), it's fair to say that Eternals is not really a good fit for theaters. It's a slower paced film with few big stars (outside a supporting performance from Angelina Jolie), and a story that doesn't exactly suck you in the way other MCU films would. It's more thoughtful, maybe even sedate at times. It's the anti-MCU film, in fact, and it's not what fans of the franchise likely expected.

And yet, there's something to be said about the film. It has a different look to it, a different style to its storytelling. It has scope and perspective that makes it very different, but at times pretty interesting. It's by no means a perfect film, and I honestly don't even think it should have been a film -- the scope of the storytelling, and all the parts going on in the film, make the story something that probably would have breathed better as a Disney+ mini-series -- but it's not the utter bomb it was described as. It is, by no mean, as bad as The Incredible Hulk.

In the film we're introduced to the Eternals, a group of super-powered beings sent to Earth 7,000 years ago, at the start of human civilization. Their job wasn't to interfere in the conflicts of humanity but to defend the humans from another species, a group of alien super-beasts called Deviants. For 6,5000 years the Eternals fought the Deviants, but then, 500 years ago, they succeeded, having killed the last known Deviant on the planet. Their god, the Celestial titan Arishem (David Kaye), instructs them to stay, though, and when the time was right he would collect them and take them back home to Olympia. 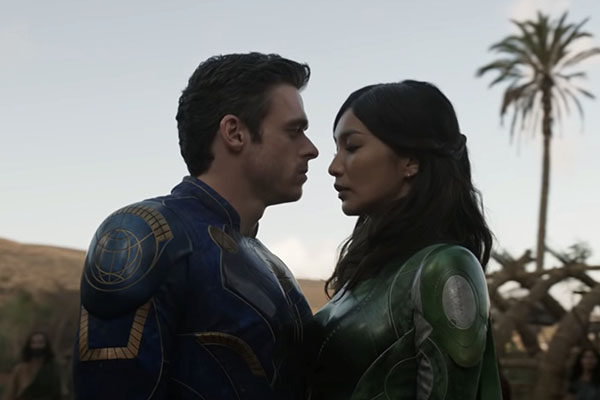 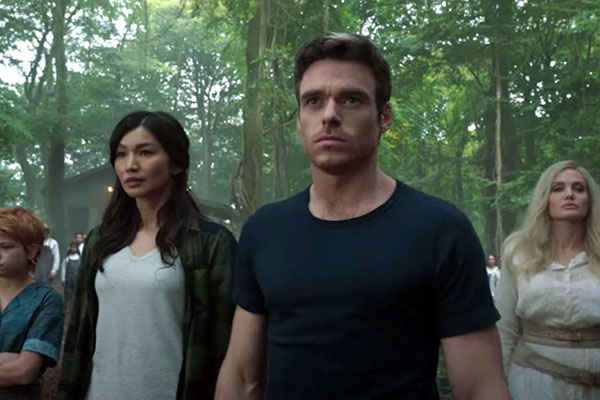 For the last 500 years, then, the Eternals resided on Earth, being a part of humanity but living separate lives. Things take a turn, though, when a new Deviant (voiced by Bill Skarsgard) comes out of nowhere and attacks Sersi (Gemma Chan), an Eternal that can shift matter (like turning wood into water), and Sprite (Lia McHugh), an Eternal with the power of Illusions (who is also permanently trapped in the body of a preteen girl). They fight it as best as they can but the beast is only beaten back when Ikaris (Richard Madden), an Eternal who basically has the powers of SupermanThe first big superhero from DC Comics, Superman has survived any number of pretenders to the throne, besting not only other comic titans but even Wolrd War II to remain one of only three comics to continue publishing since the 1940s., arrives on the scene. This prompts them o track down other members of their Eternal family, to reunite to fight the Deviants. But they might just learn a dark secret that could change their mission, and redefine their purpose on Earth.

In places Eternals can be a confounding film. It has its story set in the present day where slowly, one by one, each of the family members are brought back in. This gives the film a slow pace, slower certainly than most other superhero films. I don't think a slow pace is necessarily bad, but it does seem like the sedate pace of the film is compounded by the fact that half the movie is set during other time periods, other points in human history where we see the Eternals at work, fighting the Deviants. This seemingly pads the film out even more, making it feel like a bit of a stretch.

The film also has a large cast that it doesn't always find time to nurture. Beyond Sersi, Sprite, and Ikaris there's: Kumail Nanjiani as Kingo, who can shoot lasers from his fingers has been living as an entire dynasty of Bollywood actor for 100 years; Lauren Ridloff as Makkari, the mute speedster of the group; Barry Keoghan as Druig, who can control people with his mind; Salma Hayek as Ajak, the group's healer and one-time leader; Don Lee as Gilgamesh, the muscle who has a deadly mach-punch, and who also takes care of Angelina Jolie's Thena, the warrioress who is also suffering from the Eternals' version of Alzheimers. Each of these characters are interesting individually, but the film doesn't really have much for them to do long term in the story. Kingo drifts in and out, for example, without even being a key factor of the climax of the movie, while Makkari barely has any story at all (but she does at least get to fight in the big superhero battle at the end of the film). It's confusing and a bit disjointed.

At the same time it's easy to get lost in the scope of the film. It's impressive how much Eternals tries to put into the film. All the characters, all the settings, all the time periods. It's never confusing to watch, even if it does feel slow at times, and the film certainly should be applauded for trying. It puts in a solid effort to convey the whole scope of the several thousand years the Eternals were on Earth, and at times it does get close to pulling that off. 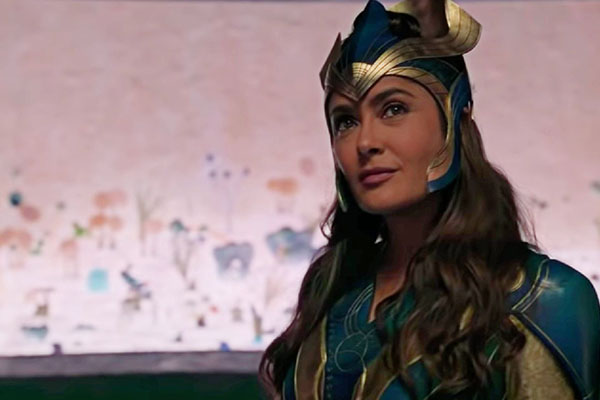 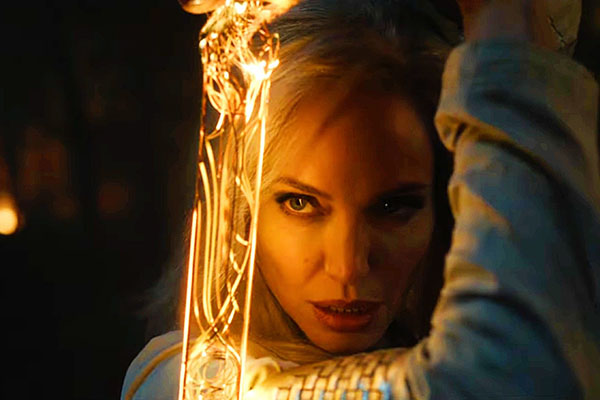 it is also one of the more mature and thoughtful films of the whole franchise. The characters aren't immature man-children learning lessons about their powers as a way to grow up (or not), unlike just about every other Marvel film (in one sense or another). The film approaches the characters like thousand-year-old Gods and attempts to reflect their perspective. It's far from an origin story, more a culmination story, and because of that it's more willing to do different (and bold) things with its subject matter. Hell, this is the first Marvel film in a decade to have characters kiss, let alone actually featuring a (very tasteful) sex scene. It has gay characters that just get to be characters. It does a lot with its time, and it feels like there was a mature adult at the helm controlling it all (director Chloe Zhao, who also co-wrote the film).

I do think the film could have benefited from being a longer mini-series instead of a condensed film. Each episode could have cut between one time period in the past alongside the adventure in the present, bringing in a new family member and giving them a story that week. It's a bit formulaic that way but it would give the characters, and settings, the room they need to expand and be interesting. Despite its sedate pace Eternals has to rush through a lot to get everything told and that does ruin the pace Zhao was probably going for. Plus, had it been a series instead of a movie the need to make it a Box Office hit wouldn't have been there. That seems like a win-win, honestly.

Eternals wasn't the giant Box Office bomb everyone described. It isn't even a bad movie; it's not perfect, by any stretch, but there is something admirable to the film. If it somehow gets a sequel (which, who knows?), let's just hope Marvel is able to get the story to flow a little faster, can put the characters to better use. I wouldn't hate to see these characters again, which is the mark of a decent film all on its own.