I Feel Like Just Saying the Title Summons a Guitar Riff

When Iron Man came out, what were the superhero movies we had at the time? Batman Begins on one end, proving that superheroes could be taken seriously (very seriously, in point of fact), and there were the Spider-Man and X-Men films at the other, proving that the Marvel heroes could, in theory, be adapted, but they also showed a more ridiculous (at times) flair. The film, effectively, brought the both sides of the genre up to that point together and made a film that bridged it all, a film that was both serious and fun. 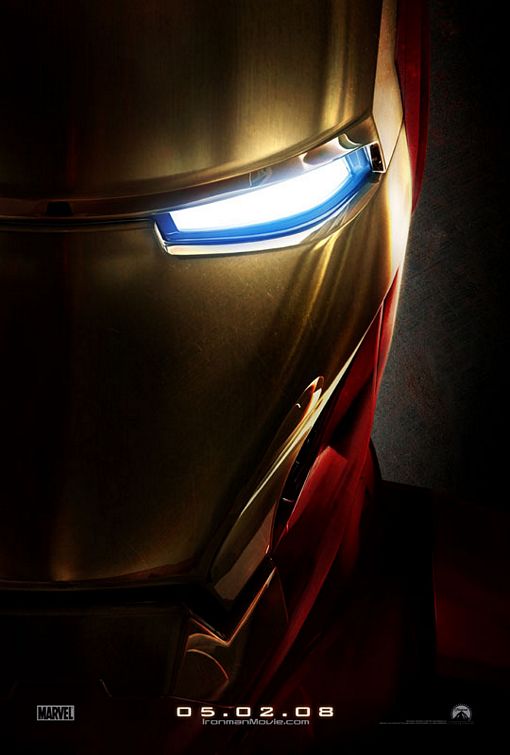 Much of the credit rightly should go to Jon Favreau who managed to weld this film together, creating a very singular vision. The film wasn't as low-budget as I expected (looking at information about it for this articles). Despite this, though, the scope of the film is fairly small, and I think in this case that was a good decision. Favreau have the unenviable task of adapting for the screen a hero most audiences hadn't heard of before. It's not as if, at the time, Iron man was anywhere near as popular as Superman or Batman. Hard to think of that now with Iron Man easily being the central character of the Marvel Cinematic UniverseWhen it first began in 2008 with a little film called Iron Man no one suspected the empire that would follow. Superhero movies in the past, especially those not featuring either Batman or Superman, were usually terrible. And yet, Iron Man would lead to a long series of successful films, launching the most successful cinema brand in history: the Marvel Cinematic Universe., the main draw for audiences to every one of those films. Back then, though, Iron Man was a C-list character at best, so unknown that Marvel couldn't even sell the film rights for him as part of a bulk package to Sony. No one cared.

That changed with this film, though. Keeping the focus solely on Tony Stark (Robert Downey, Jr.), the movie starts with Tony giving a presentation to some military folks out in the desert, showcasing the latest Stark Tech weaponry. However, the convoy carrying Tony back to the military base is attacked and Tony is captured. Hidden away in a cave by a group of terrorists (who have a surprising amount of Stark Industries weapons), Tony is forced to build one of his weapons to (supposedly) earn his freedom, although he knows that promise is false. Instead, while ostensibly doing their work, Tony builds the first of what would eventually come to be known as the Iron Man suits, a powered suit of armor he uses to break free. After his escape, Tony flies back home, vowing to not let the fruits of his company be used to create evil again. He shuts down the weapons division of his company and goes to work building an upgrade suit he can use to destroy every one of his weapons that's fallen into the wrong hands.

Unfortunately for Tony, his mission won't be so easy. There are forces, without and within, working against him, trying to get their hands on his new tech. A threat to his company may reverse all the work he's done, while the terrorist group keeps getting his weapons and spreading fear and violence. It'll take all his strength and intelligence to find a way to stop the spread of this evil and regain his company and his tech.

While the scope of the threat the movie presents to Tony is global, the actual movie itself stays very focused on Tony. He spends a lot of time in his garage, working on his suit.Iit's not even until halfway in that we get to see his upgraded armor and watch him take it for a real test run. Despite this, and in spite of the fact that the movie really only has three action set-pieces, the film really works. With the story so focused on Tony and his trials and tribulations working on his suit, the movie can give us an origin story that feels earned. We care about Tony as he builds in his shop. Trying to get everything right, and when he succeeds with each piece of tech, we cheer for him. 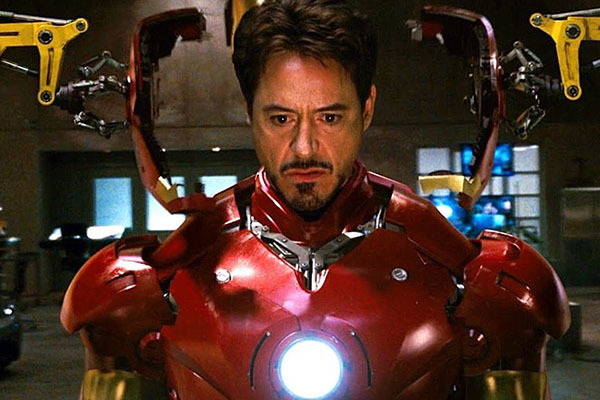 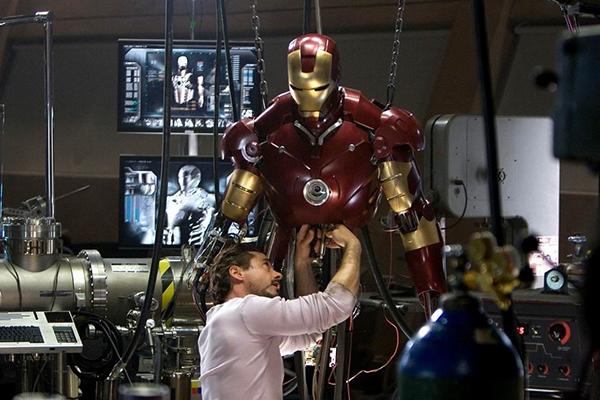 Let's face it, Tony should be unlovable. Watching him build his suit should be a chore, not a joy. But it all works because of the man in the center of the movie, Robert Downey, Jr. Reading up about the production of this movie, Downey, Jr. wasn't the producer's first choice of star for the film. He wasn't even on the short list fo the longest time. He's the biggest star in Hollywood at this point, but you have to remember that when he signed on for Iron Man he was damaged goods. Although he was nominated for an Academy Award for his performance in Chaplin, he's also earned a reputation for being hard to work with on set. Much of this was down to his alcohol and drug issues (including multiple drug arrests). Eventually, though, he cleaned up his act, got sober, and worked on rebuilding his career.

As was famously noted, many of the stars courted for the movie (like Tom Cruise) would have wanted more control over the production, to have more influence on the story, and most of them wouldn't have been willing to sign on to play the same character in close to 20 movies at this point. Downey, Jr., though, wasn't most actors at that point. His negotiating position wasn't as good, and what he really needed was a hit, so he was more willing to sign on for multi-film deals and not stress over having complete control of the production. It certainly allowed Marvel to craft this version of a film universe, and it gave Favreau the reins to figure out how he wanted his movie to work.

Of course, while Downey, Jr. was a star available for the kind of deal Marvel wanted (and, presumably, a price they were willing to pay), he also ended up being the perfect guy for the job. A charismatic, alcoholic? It's the role he was born to play, and you can tell he funnels all his past experience into the role, getting into the mind of Tony Stark in a way I don't think most other actors could have. He plays the role just right, with a twinkle in his eye but also a dead seriousness when needed. Going back and watching the movie for this review, I was struck, once again, by the fact that I really can't think of anyone else that could play this role this perfectly.

That said, Downey, Jr. is such a force in the film most of the other actors get outshone most of the time. Terrence Howard, for example, seems lost in his role as Colonel James Rhodes, especially any time he's on screen with Stark. It's easy to see why marvel decided to recast him for future sequels (and not just because he wanted more money) -- while Howard is a good actor, he just couldn't even stand in the same league as Downey, Jr. 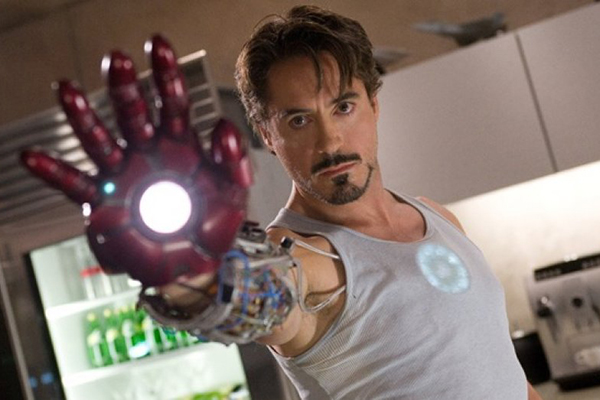 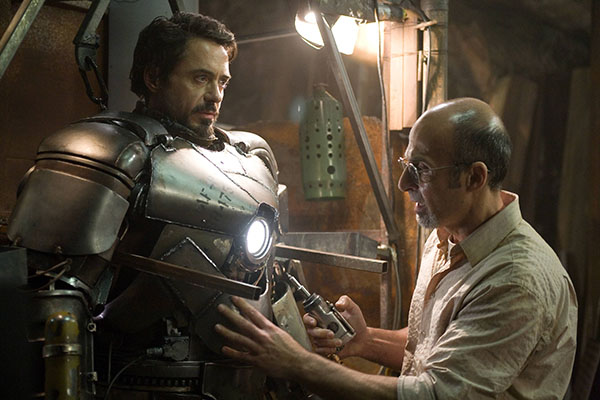 Jeff Bridges fares better as Obadiah Stane, at least inhabiting the role and trying to make it his own. Sadly, Stane isn't a very well written character, disappearing for whole chunks of the film before suddenly becoming the bad guy half-way in. I like Bridges and I think he gave his villainous character his all, but there was only so much he could do with the underwritten role. When people complain about the fact that Marvel has a villain problem, that even with great actors in the roles the characters just aren't interesting, that started here.

I feel bad for Gwyneth Paltrow, who played Pepper Potts, as her role here is as close as the film gets to a second lead and even she doesn't have anywhere near the screen time as Tony. Her role is little more than Tony's assistant (something that gets rectified in the sequels) and maybe love interest, and while the banter between her and Tony is great (with some really fantastic scenes), she just doesn't get a whole lot to do until the end of the last act.

That last act, really, is just a mess. Suddenly there's a threat to Tony, he has to stop the villain, and it all rushed forward very quickly before just kind of ending. The pacing is so different from the rest of the movie, far less meticulous, and it just feels like they had to try and end the film around the two-hour mark instead of letting it flow more naturally. The last act doesn't completely betray the movie but it really could have been better.

Still, as the first part of an ongoing connected universe of movies, Iron Man is great. Hell, as a film for a superhero barely anyone had heard about, and film that takes it's characters, and the world they live in, seriously, Iron Man is fantastic. It's so good, and Robert Downey, Jr. is so good in it, that it's hard to think of better superhero origin movies. There's a reason it launched the MCU.