The first season of Agent Carter focused, very deeply, in the shows connection to the Marvel Cinematic UniverseWhen it first began in 2008 with a little film called Iron Man no one suspected the empire that would follow. Superhero movies in the past, especially those not featuring either Batman or Superman, were usually terrible. And yet, Iron Man would lead to a long series of successful films, launching the most successful cinema brand in history: the Marvel Cinematic Universe.. But like it's sister show, Agents of SHIELD, Agent Carter very quickly moved away from direct connections to the main film universe. The first season very much wanted to reestablish who Peggy was -- friend (and love interest) of Captain AmericaCreated by Simon and Kirby in 1941, Captain America was a super soldier created to fight Germany and the evil HYDRA. Then he was lost in the ice, only to be found and reborn decades later as the great symbol of the USA., super spy with the Strategic Scientific Reserve (precursor to SHIELD), and all around capable agent, soldier, and human being -- and where she was headed (as the eventual head of SHIELD). It was a show that constantly wanted to remind viewers, "hey, this is an MCU show," despite the fact that none of the lead actors from the movies would ever appear on the show. 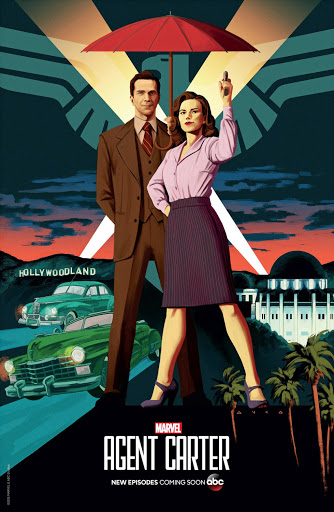 While I know a lot of people really want to MCU show to tie directly into the main movies, I was fine with the compromises SHIELD and Agent Carter had to make -- they could have bit players (or one cameo from Sammy J in the first episode of SHIELD), and they could mention events, but it was never a two-way street. If something major happened on Agents of SHIELD, don't expect it to be reflected in the movies. Many fans had issues with this -- if Agent Coulson was back on SHIELD, shouldn't he be able to show up in the movies and talk about what he's been doing? -- but I actually found it freeing for the shows.

Think about season one of Agents of SHIELD, a show that was stymied from the get-go because Captain America: The Winter Soldier was going to come out later in the season and it would, in essence, blow up the whole concept of the show, so the season spun its wheels for 18 episodes while it waited for the big twist. Agent Carter never had that problem, being set in the 1940s in a period that was largely unexplored by the MCU (once Captain America went into the icy drink), but the show still felt oddly reverent in its first season, like it didn't want to push too far or forge new ground outside of established MCU boundaries. It was a solid season, sure, but it could have been bolder.

For season two, though, the show shakes off any attempt to tie itself to the MCU, moving Peggy out of the confines of New York to sunny L.A. so she can explore a case that has absolutely nothing to do with the larger MCU. Peggy is called out to help with a weird murder -- a girl found dead in a mass of ice in the middle of a lake while the rest of the city suffers a heat wave. That murder the spins into a larger conspiracy, one that involves a shadowy group controlling the government and a weird substance that has the potential to end the world, Zero Matter. And in the middle of it all is Peggy, infiltrating groups, doing covert ops, and kicking ass left and right as only she can do.

The strongest part of the show remains Haley Atwell as Peggy Carter. She's brassy, tough, and charismatic, a great performance for a lead character in any of the MCU shows. Really, I'd say that Atwell's Carter is as good a performance as Chris Evans as Cap or Chris Hemsworth as ThorBorn to one day by the king of Asgard, Thor is the god of thunder. His power is divine but can be tapped into by whoever wields his hammer, granting them the powers (and title) of Thor.. She strong enough to carry this show on her own and it's just a pity she never got to be the lead in any of the movies because she absolutely could have been the biggest star in the series (despite not having any powers). Honestly, the only reason she didn't get a movie for her character was because Marvel, at the time, didn't think female superheros could lead movies (which was idiotic, as both Wonder Woman and Captain Marvel proved), so they chucked her in a show on ABC, a network that proved they really didn't have a clue what to do with their superhero properties. 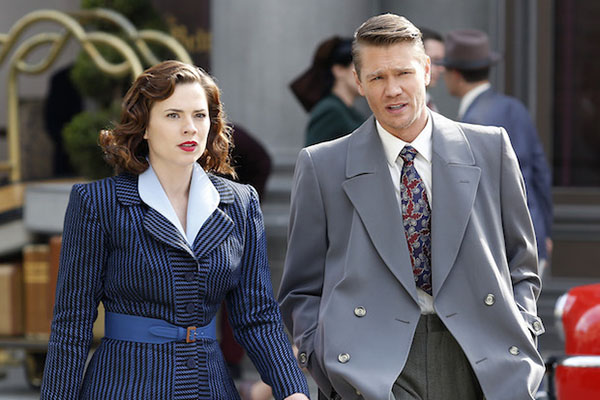 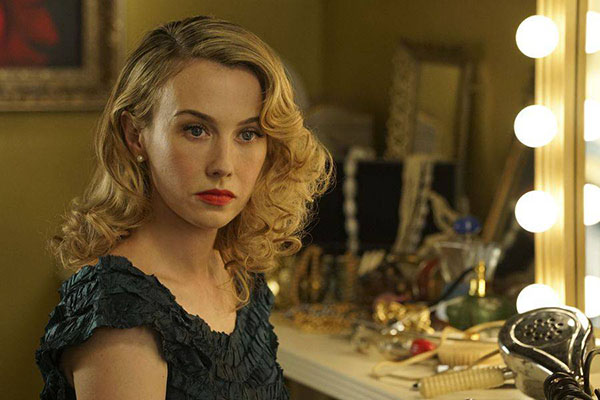 As good as Atwell is, this season proved that Agent Carter was more than just a solo effort. James D'Arcy returned as Edwin Jarvis, the delightful British butler for Howard Stark (Dominic Cooper, who does cameo a few times this season as well). Jarvis is just as great as well, dry yet eager, a good companion to the at times hyper-focused Carter. And Daniel Sousa (Enver Gjokaj) is back as well, and this time the stiffness of his character has been loosened, allowing him to join in on the antics of the story.

It's fair to describe them as antics as this season is much looser and funnier than the first season. Season one wanted to play into the energy and style of Captain America: The First Avenger (without, you know, the budget), so it was more straight-laced. It took time for the MCU to really embrace its goofy humor (it was always funny, but not overly silly), and the second season of the show illustrated what could happen if characters were allowed to get a touch more relaxed and joke around even more. The second season is fun and in no way as stiff as the first season of the series.

That's not to say the season doesn't have its serious moments. The villain this time around is Whitney Frost (Wynn Everett), a film star (and brilliant mind) who gets hit by Zero Matter in an accident and suddenly becomes obsessed with the material. Her clashes with Peggy as the agent works to eliminate Zero Matter while the actress tries to find ways to create more, forms the backbone of the season. She's a strong character but, better, the show is able to pit a female hero against a female villain, each of which can have their own perspective of dealing with men, which means each an interesting reflection for the other. It's similar to how Dotty Underwood (secretly a Russian agent) was a mirror for Carter in the first season, except that Dotty had a man above her acting as the real villain. This season dodges that, making Whitney the main antagonist and it's stronger for it.

If there's any weakness in the season it's not the fault of the episodes but what came after. The season ends (and spoiler for a four year old show) with Peggy finally moving on with her life, moving beyond just being Cap's "Best Gal" and finding love with Sousa instead. She gains acceptance, closure, and a new beginning... and then Avengers: Endgame wipes that all away, having Captain America go into the past so he can settle down with Peggy and live the life he wanted all along. It's an ending tailored specifically for him, and while Peggy seems happy in the moment it betrays all the work the two seasons of the show did for her character. 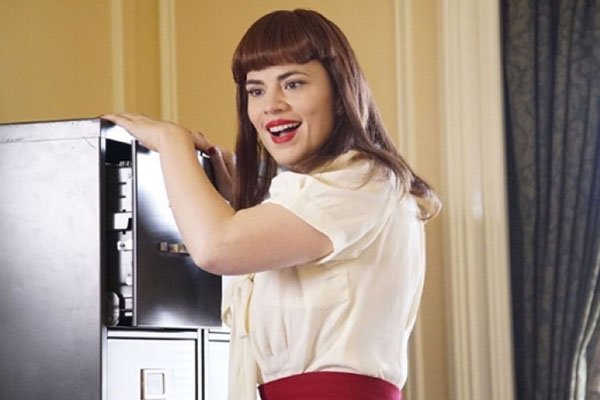 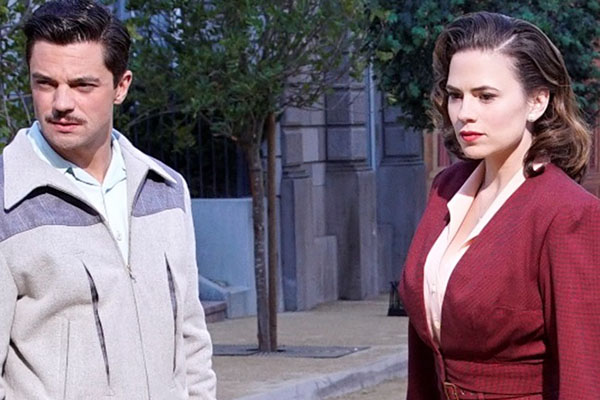 It's a strange way to tie up the plot lines of Steve and Peggy, honestly, because it turns her into a prize for Cap after he's completed his mission. Yet the Peggy we know wouldn't just ditch Sousa so lightly -- if she'd moved on, she would have a hard time just falling back into the arms of another (even if he is the chiseled slab of man-meat that is Chris Evans). And when you consider that the film goes out of its way to include Edwin Jarvis (still played by James D'Arcy), as if saying, "yes, Agent Carter is in continuity," it becomes an even worse decision for the film.

This is one of those changes that really make you wish we could have another season of Agent Carter, with special guest Chris Evans, just so we could get a bit of smoothing out of all of this. Maybe that's the next female-led movie Marvel should pursue: Peggy Carter of SHIELD, where she's balancing a high-stakes mission and her personal life when the guy that's supposed to be dead comes back into her life, blowing up everything she thought she knew. I'd watch that, but then I'd watch anything with Peggy Carter in it. She's the best.

I really enjoyed both seasons of Agent Carter, but this second season was especially strong. It's just sad that ABC canceled it long before Disney+ came into being -- this is the kind of show that could kill on a streaming service where it could tell its stories any way it wanted. Instead we have but these two seasons to enjoy, 18 episodes of Peggy kicking ass and taking names. It's great, but I really just want more.