For King and Country, Except Without that "King" Part

Okay, so you're Marvel. You have this big, planned universe you're building towards, all of which is going to cap with a huge, crossover movie, the scope of which has never been tried before. Almost all your characters are established, but you just have one more to go, and this one, in many ways, is going to be the hardest to truly get right. Not only will you be introducing yet another hero that hasn't yet found success on the Silver Screen (big or little considering both two failed 1970s movies and a 1990 film so bad it went direct-to-video), but this is also going to be a period piece. Are audiences really going to show up for a World War 2 superhero film? 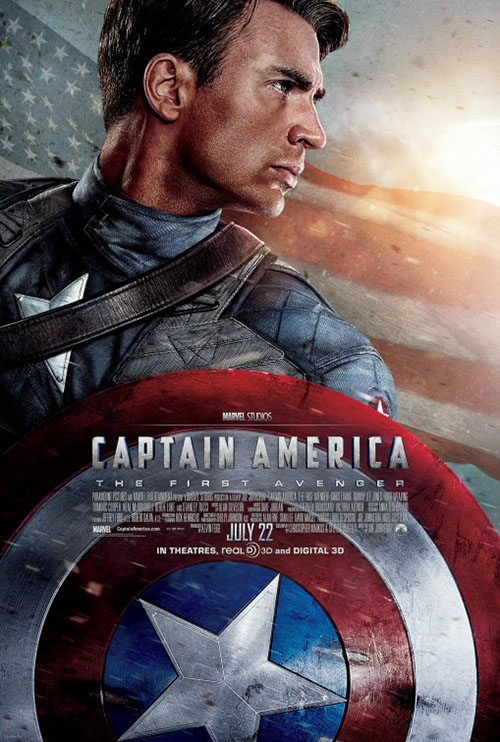 They did, certainly more so than for The Incredible Hulk. Not that I think it really would have mattered to Marvel at that point. They were already pot-committed to getting the next film, The Avengers setup and launched. Captain America: The First Avenger could have been an absolute bomb and the next film would have come out regardless. Sure, they might have recast Cap (like the did for Hulk in the next film), but otherwise, win or lose, Captain America was going to be a blip on their bottom line. The train was cruising down the tracks, so this one film probably didn't really matter in the end.

Thankfully, despite the inevitability of the next film, Captain America was a good film in its own right. Uneven to be sure, and one that I've only really grown to appreciate over time, but still a solid entry in the early Marvel Cinematic UniverseWhen it first began in 2008 with a little film called Iron Man no one suspected the empire that would follow. Superhero movies in the past, especially those not featuring either Batman or Superman, were usually terrible. And yet, Iron Man would lead to a long series of successful films, launching the most successful cinema brand in history: the Marvel Cinematic Universe.. It's no Hulk, but really, it's not even bad enough to be considered in the same thought at that film. The two solo outing for the Green Monster and the Star Spangled Man are night and day when looked at side-by-side.

Set in the middle of World War II, we're introduced to the scrawny, but patriotic, Steve Rogers (Chris Evans), a man that just wants to serve his country. He tries, again and again, to enlist, only to be rebuffed every time because he's short, weak, asthmatic, flat-footed, and all around ill-equipped to be on the front lines as a soldier. And yet he keeps trying, this despite the repeated chides from his best friend, Bucky Barnes (Sebastian Stan). An attempt at yet another recruiting station leads Steven to a chance encounter with Dr. Abraham Erskine (Stanley Tucci), a scientist (working with the American government) with a way to make Steve into a super soldier. Drawn to the young man's heart, his determination, his good nature, and his soul, the scientist choose Steve to be the first to undergo the procedure.

And it works. Steve emerges from the procedure bigger, stronger, and more capable than anyone before. Unfortunately, a HYDRA spy was at the first test of the procedure (HYDRA being the Nazi weapons development arm, or, if we go off later SHIELD continuity, a secret organization that aligns themselves with the Nazis and then becomes their special weapons division), and after Steve emerges, the spy shoots the good doctor and runs off. Steve, now super, captures the man and gains fame from his exploits. The government dubs him "Captain America" and puts him to use selling war bonds (as he's a charismatic hero). But when participating in the USO overseas, Steve finds out that his friend, Bucky, as well as a good portion of Bucky's platoon, were taken prisoner by HYRDA. Steve storms their gates, saves his friend and colleagues, and starts his career as Captain America, working across Europe to stop HYDRA and it's leader, the Red Skull (Hugo Weaving). 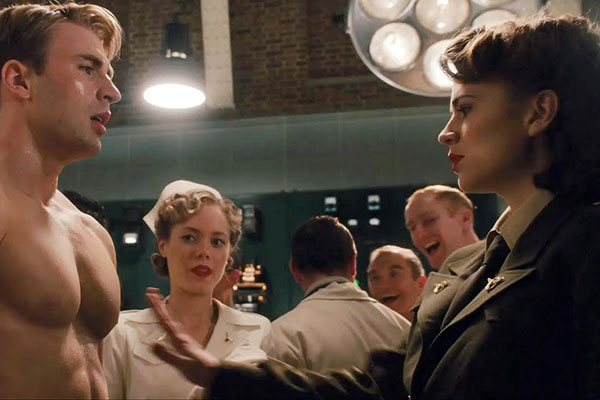 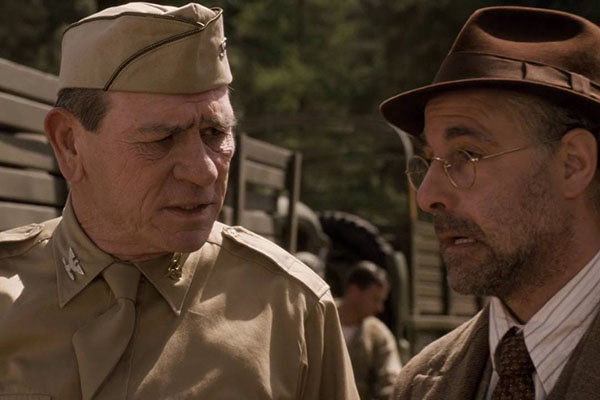 I really like Captain America despite it basically being the closest Marvel has come to creating out-right, pro-USA propaganda in the MCU. Of course, that fact couldn't really be helped since, in the World War II era, Cap essentially was propaganda. More than even Superman, Wonder Woman, or many of the other heroes that went to the front lines to fight on the pages of the funny books, Captain America was made to be propaganda, to sell Americans on the war and show how good our heroes could be. I appreciate that Marvel didn't shy away from that in the movies, explicitly showing a version of Steve's career where he's knowingly used as propaganda (because, for him, it's all in service of the war effort, something he believes in).

There's a great montage in the middle of the film, a break between the first and second acts, where we see Steve on his war bond tour, chorus girls singing and dancing in the background. It's a fun, entertaining sequence, but it also firmly ground Steve in his world, a propaganda piece but also a human, especially as he grows tired of the grind and simply desires to get out and do what he was trained (and designed) to do.

The montage is also one of the many moments with humor and joy in the production. Unlike Incredible Hulk, Captain America is a fun, enjoyable adventure, about as lighthearted a movie as you could get out of a film about World War II and Nazis. There are dark themes to the film, to be sure, but it's a superhero adventure flick (not a war documentary), and the film is able to balance a light tone with the proceedings. It took a deft hand to make a movie with this kind of energy, and director Joe Johnston (who also directed the propagan-tastic The Rocketeer) is able to neatly create the right kind of energy for the film.

Of course, the real credit for the movie has to go to lead actor Chris Evans. Let's face it, Captain America seems a little dated in this world now. A pure-hearted, aw shucks, perfect human doesn't seem like someone that can really exist now (this despite him eventually showing up in later, modern-set movies due to comic book science). With Chris Evans, though, they found an actor capable of playing that charm, that good-hearted nature necessary to sell a character like Cap. Of course, if you go Online and see his Twitter feed you're realize that Chris Evans (at least, by all evidence) is about as close to a real Captain America as any actor could be (he's quite a force for goodness and justice on social media). Marvel picked the right actor here, the right man to embody the character, heart and soul. 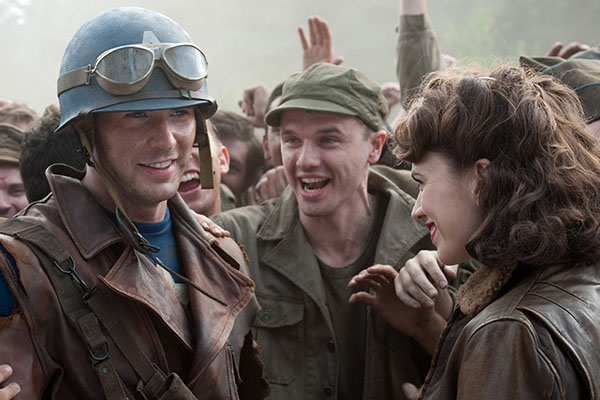 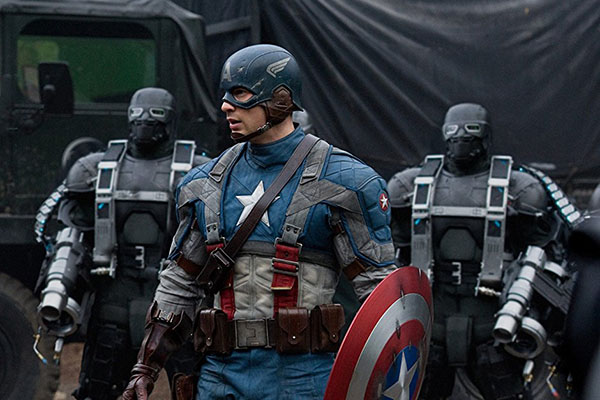 Equally up to the task is Haley Atwell as Agent Peggy Carter, as close to a co-lead as this movie has. Agent Carter (who would go on to have her own, 1950s-set series called Agent Carter) works for the Strategic Science Reserve (SSR), the secret organization that made Captain America (and who also serve as the basis for the eventual formation of SHIELD). She's a force in her own right, a strong, smart, capable dame handling her own missions while also working with Steve to take down HYRDA. Again, Marvel hired the perfect actress for this role as Atwell fully animated her character, elevating someone that could have easily just been a love interest into a great character on the screen. There's a reason she kept coming back for the role, not only in her own series but continually popping up in flashbacks and other sequences for all of Phase II of the MCU. Atwell is fantastic as Carter.

The rest of the actors are good in their roles as well, although each of them get much less screen time than Steve and Peggy. Stanley Tucci gives the good Dr. Erskine a warm-heart, stealing the few scenes he's in. Stan does solid work as Bucky, rising to be an equal to Steve despite only a few scenes in this film (although he would be back due to his own comic book-science in later films). I even liked the gruff and abrasive Tommy Lee Jones and Chester Phillips, the head of the SSR, and usually I don't like Jones in much of anything. Marvel collected a great set of actors for all the roles in this film, big and little, and the film hums along on their charisma and capabilities.

Honestly, the weakest character in the film is Red Skull, the first super soldier created by Erskine before he fled to the USA to work with the Allies. The character is underwritten, a grotesque looking Nazi with his own world-conquering ambitions. Worse, though, is that in Weaving's hands the character is broad, a scenery-chewing performance in a sea of fully-realized, down-to-earth characters. Weaving seem to be coming in from a different movie, one much sillier than the film we got (which, admittedly, is pretty silly at times). While there wasn't much that he could have done with the character as written, he could have at least brought his performance down some, made the character more realistic and better realized.

There are also, honestly, issues with the construction of the movie. Due to the constraints of the greater MCU and with this film leading directly into the next, The Avengers, all of Steve's story had to be condensed into a single film. That meant that not only did we have to get his origins but also his time on the USO, his time overseas, his time fighting HYRDA, and a big climax where Cap takes on the Red Skull. That's a lot for one movie to work through, especially one that's only two hours long. As such, there are a lot of montages and shorter sequences designed to convey a lot of story quickly and get us through Cap's whole history. It would have been better for this whole story to be two films, one focused on Cap's origins leading to him freeing his friends, and then a second about the battle against HYRDA, but for that to happen Marvel would have had to change their release schedule for all their films. 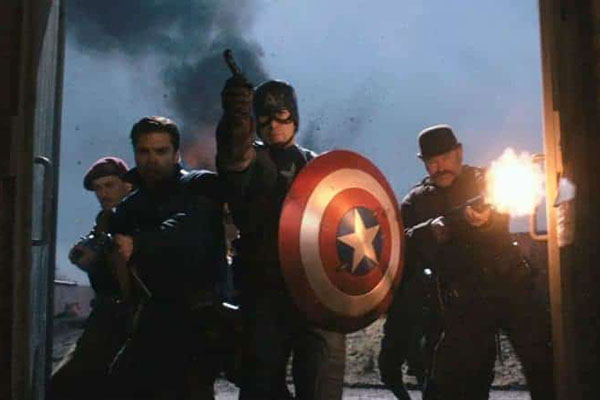 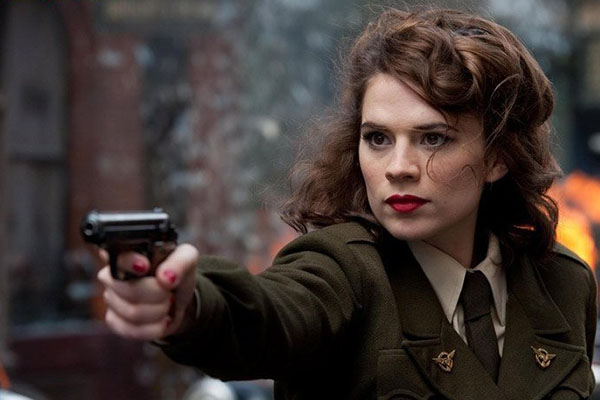 That's not to say the film we actually got was bad. Far from it -- I like Captain America: The First Avenger a whole lot. It's a light, fun, breezy movie starring a great superhero. The big issue is that it could have easily been two movies and each would have felt more fully realized. It story would have generated more pathos, more emotion if we could have spent more time in the World War II era before Cap had to be shoved into the future to interact with the Avengers.

The film gets so much right that it's a winner all on it's own. I just think it could have been better. Still, for all my quibbles, the film does work and work well. It's one of the best of the Phase I run of MCU, a close second right behind the original Iron Man. Admittedly, there were a lot of stinkers in Phase I as Marvel slowly get its bearings on how to make good movies, but my point still stands.