About to Drop the Bomb

This week saw a dearth of ArrowverseWhen it was announced that the CW was creating a show based on the Green Arrow, people laughed. The CW? Really? Was it going to be teen-oriented like everything else on the network and be called "Arrow High"? And yet that one show, Arrow has spawned three spin-offs, various related shows and given DC a successful shared universe, the Arrowverse on TV and streaming. shows. Although we'd already known Supergirl and Batwoman would be off the air, The Flash and the Legends of Tomorrow elected to take a bye-week as well, which left us with only Black Lightning to fill our week.

Ugh. Black Lightning. I just... no, we'll discuss it in the episode review:

This week saw the condensing of forces as everyone aligns themselves towards the threat of the Markovians, lead by the very first meta-human: Gravedigger. Black Lightning and his team of Outsiders stand (largely) united against Markovia with the ASA also ready to fight this threat as the Markovians land on Georgian soil and look to invade Freeland. Their goal: to round up all the meta-humans and take them back to Markovia. Gravedigger says this is a "liberation" but he also wants to control them and use the metas as his own private army to take on the U.S.... and maybe the world. And if the Markovians do take over Freeland, the U.S. Government is prepared to nuke the whole city. The stakes couldn't be higher, we suppose.

As I've repeated time and again, Black Lightning has a villain problem. It's not just this show -- both the DC Extended UniverseStarted as DC Comics' answer to the MCU, the early films in the franchise stumbled out of the gates, often mired in grim-dark storytelling and the rushed need to get this franchise started. Eventually, though, the films began to even out, becoming better as they went along. Still, this franchise has a long way to go before it's true completion for Marvel's universe. and the Marvel Cinematic UniverseWhen it first began in 2008 with a little film called Iron Man no one suspected the empire that would follow. Superhero movies in the past, especially those not featuring either Batman or Superman, were usually terrible. And yet, Iron Man would lead to a long series of successful films, launching the most successful cinema brand in history: the Marvel Cinematic Universe. have plenty of entries in their canon with series villain issues. Villains in superhero shows are hard to right; they have to have development, given time to grow to show not only their "evil" but also their humanity. They have to be made just likable enough that we care at least a little bit about their plan, charismatic enough to draw us in, but also evil and "other" enough that we don't want them to win (even while, secretly, deep down, we kind of agree with them just a little). Giving them an evil plan isn't enough if you drop them into a two hour story and then expect us to care because you tell us to.

That's been a recurring problem with Black Lightning: the villains on the show aren't given all the development they need to be truly effective. Tobias Whale had the back-story but not the plan. Lady Eve had the charisma but not the story or the plan. Painkiller kept getting reinvented to the point that we don't even know what kind of character he even is. Only Agent Odell has gotten the time, character, and development, along with a strong dash of evil plan, to be effective -- the few episodes this season that focused on Black Lightning battling Odell were the best. But Odell and the ASA aren't the villain for the end of the season; that honor belongs to Gravedigger.

Gravedigger could be an effective villain if he were given the time to develop. He's the first meta, powerful and seemingly immortal. He was abused by the U.S. Government, sacrificed in their war efforts (World War I) and treated as a second-class citizen because he's black. He's spent all this time building up an army in Markovia so he could return to the U.S> and have he vengeance on the country that forsook him. That's quality development, and then on top of that he has a personal connection to the Pierce family: he's Jefferson's great-uncle. were he given a season to fully develop, the slowly ingratiate himself to us before revealing he's a villain, and then twisting everything we know as he suddenly starts his invasion of Freeland, he's be a fantastic foil, a truly awesome antagonist that could have carried the show. 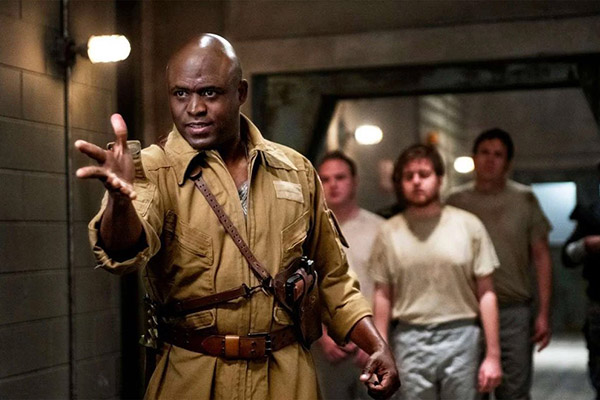 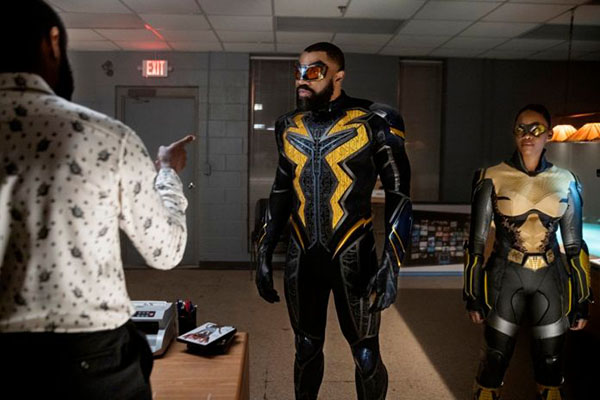 But that's not how Black Lightning rolls. Instead of focusing on a single character who could have been an effective villain the show told us about "The Markovians" and kept them as a (largely) faceless group who, we're told, have big plans and a bigger army ready to invade Freeland. We were never really shown their power or their forces, and what little we saw of them made the Markovians seem like a small militia that B.L. could take out on a coffee break. They were never a real threat. Putting a solid villain in charge of them right at the end of the story diminishes the villain instead of building up the ranks of the Markovians. It's a waste.

At this point, honestly, this season of Black Lightning is beyond saving. Even if the last episode (next week's season finale) is spectacular that won't change the poor plotting of the season, the various characters that have spun their wheels this whole time, and the show's inability to tell a continuous, effective story from start to finish. A season finale can't fix the woes of this show, no matter how good it could be on its own. It won't wipe away all the bad episodes we've sat through, the sloggy storylines and then terrible acting. it just can't undo the damage.

Now, who's ready for the season finale? Ugh...