The Rise of a Rebel

As a franchise, Star WarsThe modern blockbuster: it's a concept so commonplace now we don't even think about the fact that before the end of the 1970s, this kind of movie -- huge spectacles, big action, massive budgets -- wasn't really made. That all changed, though, with Star Wars, a series of films that were big on spectacle (and even bigger on profits). A hero's journey set against a sci-fi backdrop, nothing like this series had ever really been done before, and then Hollywood was never the same. is defined by it's most obvious science-fantasy trappings: space wizards with laser swords. The Force and its users, Jedi and Sith, are the key characters that set this universe from the likes of its contemporaries, Star TrekOriginally conceived as "Wagon Train in Space", Star Trek was released during the height of the Hollywood Western film and TV boom. While the concept CBS originally asked for had a western vibe, it was the smart, intellectual stories set in a future utopia of science and exploration that proved vital to the series' long impact on popular culture. and Flash Gordon and all the rest. It's not Star Wars, one could argue, if the franchise's lightsaber-toting space wizards aren't primary characters in the story. 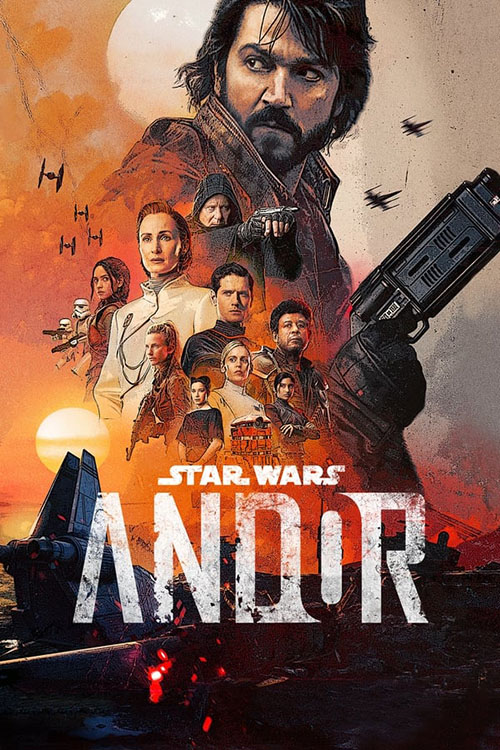 Now, obviously, that isn't entirely true. Last year's premiere of The Bad Batch, gave us a series focused entirely on characters without connections to the Force. Of course, these were characters spun off from another series, The Clone Wars, that very much did have its fair share of Jedi and Sith. What would a series look like, then, if the Force wasn't even a consideration, if the characters didn't know the space wizards and the focus wasn't on the machinations of Force-wielders but people on the streets, guys and gals just trying to get along in a war-torn corner of the Empire?

That's the story given to us in Andor, a prequel spin-off of another film that really wasn't too interested in the Jedi (even as it tied into the larger narrative of the franchise). Cassian Andor, played by Diego Luna, was introduced in Rogue One, and while that film was ostensibly someone else's story, Andor stole the scenes he was in. A rough and gritty agent for the Resistance who seemed to color outside their rules so he could get things done, Andor showed us that not every hero working for the Rebels was a "good guy" in the classic sense of the term, and despite him dying in that film (spoilers), that film's co-screen writer Tony Gilroy really wanted to explore the character further, thus giving him his own prequel series.

While Andor is, naturally, about how Cassian Andor (still played by Diego Luna) came to join the Resistance, the series really isn't so much about that as an exploration of the Empire itself from a ground-level view. We've already seen the politics of the Emperor, his second-in-command Darth Vader, and the Jedi fighting against them, but despite the franchise being about a Galaxy Far, Far Away we haven't really spent as much time explore the actual galaxy at the center of that Empire. This series takes the time to really change that and show just why the Empire, and its forces, had to be eliminated to usher in peace via the new Republic. Because of that, this series gets dark, much darker than anyone might expect from something in the Star Wars franchise. But it also makes it one of the best works the series has produced in a long, long time.

We pick up with Andor early in his career. He's a conman and general ne'er-do-well, a guy scraping by stealing parts (and info) from the Empire. He gets the attention of sub-contracted Imperial forces Deputy, Syril Karnwhen (Kyle Soller), after sneaking onto a planet in search of his missing sister. Things go sideways, two dickish guards end up dead, and it all gets pieced back to Cassian Andor. This puts him on the run, and lead him to follow along with Luthen Rael (Stellan Skarsgard), an agent for the Rebellion with a job for Andor. 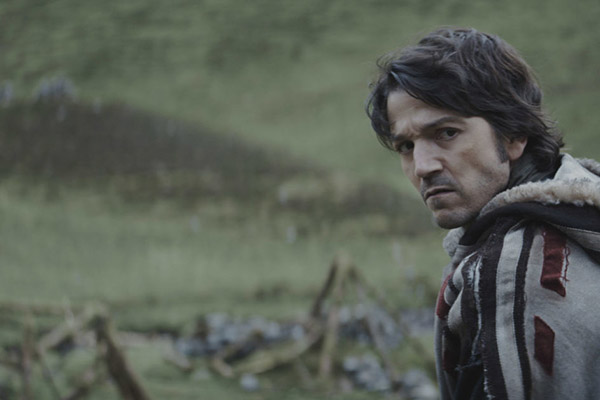 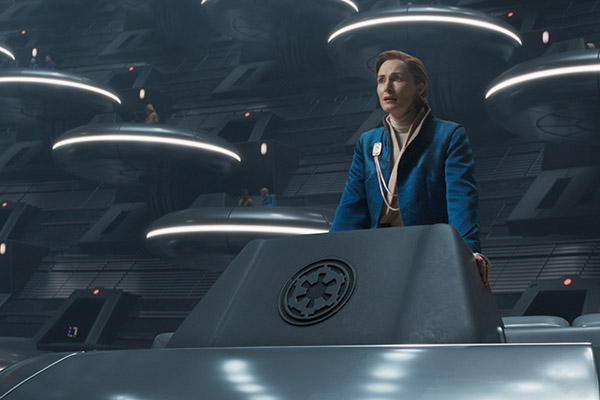 That jobs: stealing the payroll from an Imperial outpost via aiding the agents on that mission. Cassian ends up being invaluable to the team, the only reason they manage to get away with any of the haul at all, but instead of joining with the team Cassian takes his cut and bails. Unfortunately as he's still a wanted man he has to go hiding, taking up a fake identity on a pleasure planet. However the Empire charges his fake identity with made up crimes, sending Andor to prison anyway. What then leads are more capers, a prison escape, lots of running, and a realization that he's in too deep to keep running from his destiny. He might just have to become a rebel as there's nothing else he's good at.

By design, Andor is setup as a series of long-form adventures. It's serialized in its storytelling, yes, but instead of providing episodic or seasonal tales the story instead is told via movie-length episode groups. The first three episodes introduce the setting, ht next three focus on the payroll heist, then we get a single episode setting up the prison storyline, followed by a two-episode finale. What this does is keep the momentum of the series flowing. Each tale gives us a new perspective, a new storyline to follow, and new group of characters to explore.

This also means that we get to see a lot of different parts of the Empire never explored before. We know the Rebellion had to have started somewhere, but now we can see that it wasn't one group or two groups but a whole series of cells, all working on their own missions, sometimes at cross purposes just to keep the Empire on their toes. We knew the Empire had to have prisons but we hadn't really seen them before, or learned about the casual cruelty of these places. Each new area we travel to gives us something we haven't seen in Star Wars before, which helps to widen the scope of the franchise for future tales.

More importantly, though, this show illustrates the true evil of the Empire. It's one thing to have a villain, the Emperor, and the iconography of fascism to show how this is an "evil Empire". At the same time, though, the Empire, like so much of Star Wars, remained more of an idea to fight against that an actual evil regime. It's hard to understand how the Empire gained and kept so much power across such a giant swath of the universe. The politics in Star Wars, in short, has never been its strong suit. 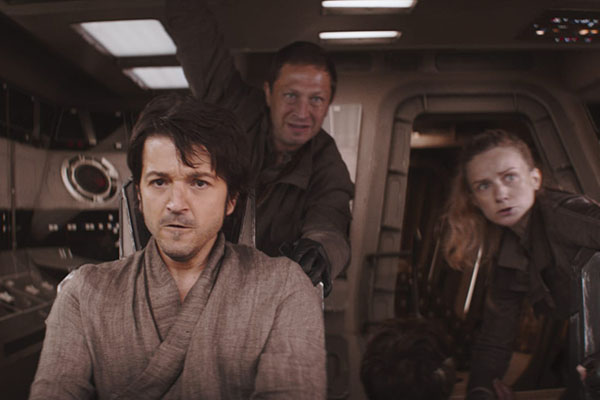 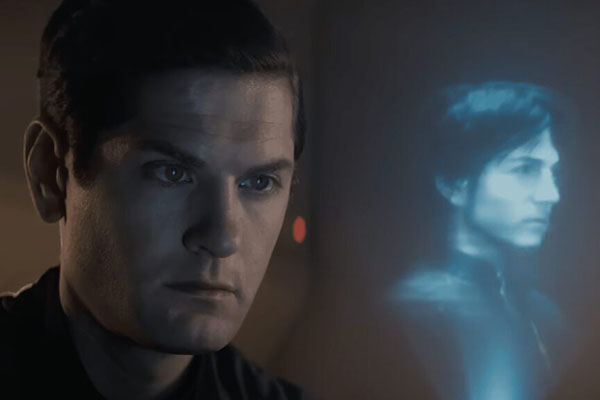 Here, though, the series really shows us all the ways the Empire's regime dominated and destroyed the cultures it ruled. Whatever planet the Empire was on, they'd ruin the native culture, placating the people until they could eliminate them, all so the planet could be harvested for resources. The Empire is a homogeneous regime and anything that didn't suit the needs of the Emperor is eliminated. Punish, control, obliterate, all with such a causal disregard for the people. It underscores the evil of the Empire better than any large act of violence could.

Through it all we have Cassian Andor, an anti-hero who just wanted to live his life and avoid the notice of anyone. This season pushes him off his planet and out of his comfort zone, all so he could become the agent the Rebellion needed. We know his fate, yes, but we never saw how he got there, and by exploring his story we can see the rise of the Rebellion from an entirely different light. Yes, they're fighting the Empire so that makes them our "heroes", but they weren't above being just as grim and nasty as the Empire as a means to an end. That's an interesting perspective you won't get in the movies.

Frankly, though, it's just refreshing to have a story that feels so real in this Galaxy Far, Far Away. No Jedi, no Sith, no laser swords or Force or big moves for the good of the galaxy. Smaller stories, focused on really exploring these worlds and these peoples. It illustrates the universe so well, giving us better insight into the civilizations that make up the Empire. Yes, if all you want from Star Wars is space wizards with laser swords this might not be the series for you. But if you give it a chance, Andor will give you the sweeping tale of rebellion you might not have even realized you wanted.