George Lucas famously loved Star WarsThe modern blockbuster: it's a concept so commonplace now we don't even think about the fact that before the end of the 1970s, this kind of movie -- huge spectacles, big action, massive budgets -- wasn't really made. That all changed, though, with Star Wars, a series of films that were big on spectacle (and even bigger on profits). A hero's journey set against a sci-fi backdrop, nothing like this series had ever really been done before, and then Hollywood was never the same. parodies. Why Lucasfilm would often clamp down on any serious fan-work that tried to make money from the franchise, they were often much more forgiving about comedies that played in the Star Wars sandbox. The most famous work of parody, of course, was Spaceballs, the Mel Brooks comedy that riffed as hard as it could on Star Wars. It's the most successful parody of the original films anyone can think of and was allowed essentially because parodies are protected by U.S. law but also blessed by Lucas himself (but, by agreement, the film wasn't allowed any merchandising). 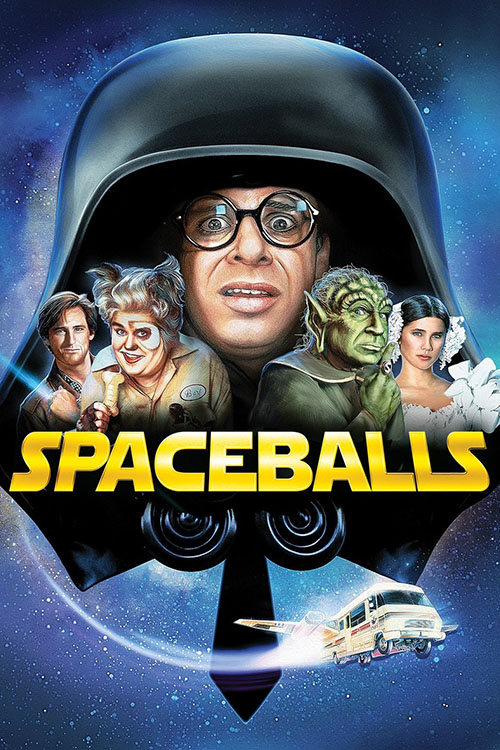 I know for many people who greew up with Star Wars, Spaceballs felt like a subversive trip. Sitting there in the theater, watching character act like Star Wars characters (but not quite), making fun of the universe we'd seen on theater screens and VHS tapes, was a strange delight. Kids loved the movie because it was fun and silly and played in the sandbox they beloved (without really shitting on it at all). Adults, meanwhile, got a number of jokes that likely went over the heads of kids in the audience, raunchy humor and references to movies the kids probably hadn't seen (like Alien, Planet of the Apes, and more). Really, Spaceballs is a movie best viewed when one is 13 years old so you can appreciate the raunchy jokes and silly, juvenile antics without finding anything on screen annoying.

Because, let's face it, Spaceballs is a deeply silly, gutter-brained movie (and not just because it has the word "balls" in the title). The evil Spaceball Empire, lead by President Skroob (Brooks) wants to attack Druidia, a planet with a ton of oxygen, as the Spaceballs have used up all the air on their planet. For leverage they kidnap Princess Vespa (Daphnie Zuniga) and her droid Dot Matrix (played by Lorene Yarnell, voiced by Joan Rivers). This leads the Druidian king to hire a local bounty hunter, Lone Starr (Bill Pulman), and his assistant Barf (John Candy) to launch an operation to save the princess, and he'll pay handsomely for it. THat's good because Lone Starr owes a lot of money to Pizza the Hutt and has to pay it back quick or else. And then, along the way, the four adventurers end up meeting Yogurt (also Brooks), the Yoda stand in, learn all about the Shwartz (read: Force), and end up fighting the Spaceballs and saving the galaxy. So, you know, Star Wars but silly.

Your mileage with Spaceballs is really going to depend on how much the humor entertains you because, honestly, the plot of the film is pretty slight. It's really just a chase movie, but one where neither side is all that great at the chase. The film does have a couple of action set-pieces (all, really, at the end of the movie) but it's the humor, not the action, that carries the say. So if you don't find it funny that the dudes all have Lightsaber Rings and to reveal their blades they hold their rings at their crotches (removing the thinly-vield qualifier from the phallic metaphor) you might have issues with some of the jokes in this movie. Not everything is like that, but there are enough jokes that are clearly aimed at the pre-teens in the audience, ones that find it funny to make jokes about dicks and assholes, that not everyone is going to laugh all the time.

On the flip, there are some really great moments in the movie that make me laugh every time, and most of them come from the Spaceballs themselves. There's the sequence of the Spaceball soldiers being sent to comb the desert planet our heroes have crashed onto, and they do it with literal combs; it's stupid, but still funny every time. Then there's the elaborate sequence of the Spaceballs cheating and checking out Spaceballs: The Home Video so they can see what happened in the movie when they weren't around -- a technical feat and one that required huge portions of the movie to already be edited before that sequence could be filmed. The reactions of the characters, Dark Helmet (Rick Moranis) and Colonel Sanderz (George Wyner) to this whole sequence is, really, worth the price of admission for the whole movie. 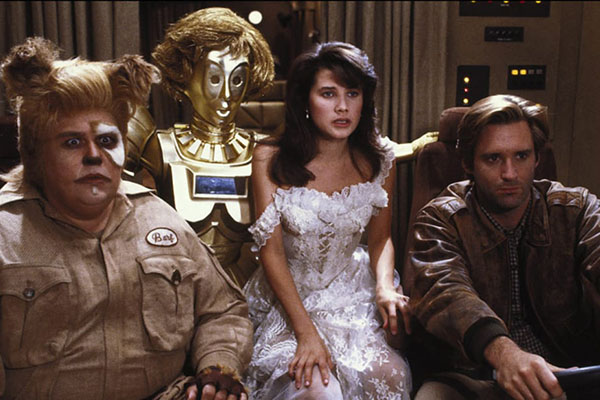 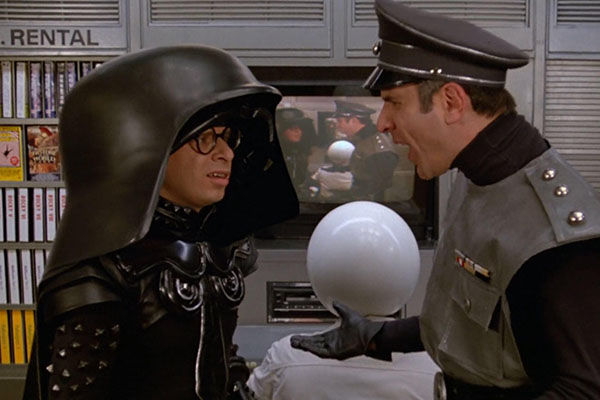 Honestly, I could watch all the Spaceball sequences over and over because they're the funniest parts of the movie. Moranis absolutely kills it as the shorter, angrier version of Darth Vader, nebbish and dumb, a shtick he basically played in a lot of movies but he does so well here. Coupled with Wyner's Sanderz, who acts as a calming straight man the whole time, every sequence on the Spaceball mothership, Spaceball-1, is hilarious. If only the rest of the movie were that good.

It's the parts with our heroes where the movie doesn't quite hold up. I would lay most of the blame with the leads, really, as neither Pullman nor Zuniga are all that funny in their roles of Lone Starr and Princess Vespa, respectively. They don't have the needed chemistry together to sell their stories, nor do either of them have the comedic timing to play off the antics around them and really find the humor. He's sleepy-eyed and she's obnoxious and neither of them are enjoyable to be around.

Not that the film really gives them all that much to do. The Spaceballs are the inciting incident, the reason everyone is on the run, and the constant pursuers. All the big action happens over on Spaceball-1 while our heroes are left simply to react. They don't really drive their own story, just act as passengers in it while the movie drags them along. In my most recent watching of the film I was bored with our heroes, counting down the time until we could go back to Spaceball-1 and find the humor again.

Maybe if the film had more to say about the heroes it could have been more interesting. The Spaceball Empire is elaborate, with a giant ship, lots of colorful characters, and a whole lot of back-story to play off of. The villains of the movie are rich and deep while the heroes, by comparison, are either motivated by greed or just the desire to get home to their rich, pampered lives. It's hard to say there's any real growth for the heroes but the villains get a lot of time to evolve, to get throw into one mess after another before picking themselves up again. A movie mostly just about the Spaceballs might have honestly been more interesting. 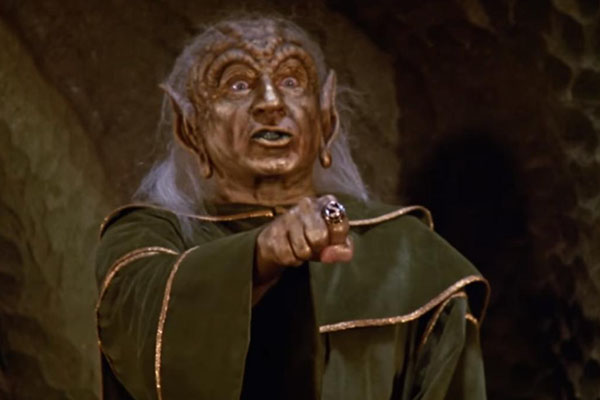 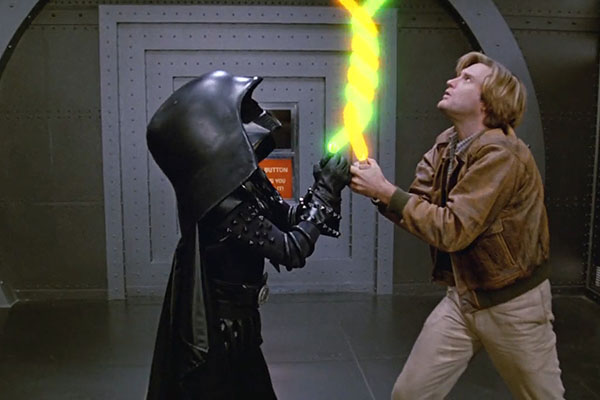 But then it's not the story that people really think of when they talk about Spaceballs, it's the specific, elaborate sequences and the great one-liners. I know any time my wife says, "oh, shit," I have to immediately respond (in a clipped, British accent), "there goes the planet!" Any time two things are brought to me for comparison, in the back of my mind I hear, "I see your Schwartz is as big as mine!" This movie is endlessly quotable, with so many great scenes that can be taken individually and enjoyed. The movie might not come together as a whole as well as I'd like but I can watch any one of the big scenes from the movie over and over again.

Really, I think the fact is that at this point I'm thirty years removed from the kid that saw the film in theaters, whole laughed uncontrollably at the silly antics of all the characters. The kid in me still finds glee in all the dumb stuff on screen in Spaceballs but the adult version wants a little more story, a little more substance, and much more likable heroes. Maybe if I were young again I wouldn't care. Spaceballs, I think, is a movie perfectly setup to be enjoyed by a specific group: kids, between six and fifteen. It's just raunchy enough that any kid watching it will feel like they pulled off a subversive act (which they'll love) but it's not so mature that anyone would really object to younger people watching the movie. It's fun and dumb and amusing and an easy way to laugh uncontrollably at glowing dick jokes. The kid in me loves that.

More Adventures of the Spaceballs

While the 1987 film is beloved, the same can't be said for the animated continuation produced for G4 in 2008. A direct continuation of the film, the series was reviled by fans and critics and died a merciful death after 13 episodes. I haven't brought myself to find out just how bad the series was, but from everything I read it was juvenile, mean-spirited, and pretty dumb.

There may be a reason that, as of yet, we haven't seen another revival attempt of the franchise.