Wicket, You Have Betrayed Me

Ewoks and the Dandelion Warriors

Look, I'm not here just to crap on various bits of media. Although I will be the first to admit that I am a picky consumer of media -- I like what I like and if something doesn't meet my high standards I will say so -- but my goal is less to purposefully come out a crap on everything than to simply explore items with an open mind and see how they go. If they're bad, I'll say so, and I will judge everything to the same measure. Impress me, though, and I will glowingly write about you because you legitimately put in the effort.

Such is not the case with Ewoks and the Dandelion Warriors. Although the Star WarsThe modern blockbuster: it's a concept so commonplace now we don't even think about the fact that before the end of the 1970s, this kind of movie -- huge spectacles, big action, massive budgets -- wasn't really made. That all changed, though, with Star Wars, a series of films that were big on spectacle (and even bigger on profits). A hero's journey set against a sci-fi backdrop, nothing like this series had ever really been done before, and then Hollywood was never the same. series has produced some stinkers up until now, it's going to be hard for us to find a game much worse than this MSX title. This is an ill-conceived mess of a game that was clearly crapped out by publisher Walther Miller back in 1987 to capitalize on a license they somehow lucked into. I have to think the company got the license to make a game based on the terrible Ewoks made for TV films because no one else wanted it, and this was the result. Bad leads to bad, I guess.

In the game hero Wicket (aka, the Brown Ewok in this game) is trapped in the forest, forced to fight his way past hordes of dandelion warriors (aka, the blue blobs) all to... do something. I'll be honest, I don't know if there's an end to this game or not because playing more than a few minutes of it made my head ache and my brains leak out my ears. It's just that terrible. I know the MSX had some bad games in its library, but this really takes the cake when it comes to awful titles.

The issues begin with the fact that this hardly feels like an Ewok adventure. Whether you're come here from Episode VI: Return of the Jedi or those aforementioned Ewok films, you probably have some preconceptions about what the Ewoks do. They run around. They dance. They yub, and then yub again. What I don't associate them with is running in a single direction, throwing endless spears as they slaughter waves upon waves of warriors. That doesn't feel like Ewoks.

There are any number of simple games that actually could have been made with this specific license that would actually feel appropriate to the characters. A game where you have to swing back and forth in the trees saving little Ewok babies as they fall from the branches? That's one. A game where you try to trip stormtroopers on speeder bikes as they fly across the jungle? That's two. Hell, if you really wanted them to slaughter guys you could even put them in an AT-ST and have them shoot at dudes as they rumble along the forest. Any of those feel more like an Ewok adventure than this malformed mess.

If we ignore the inappropriate use of the license we have to confront the fact that this game just isn't any fun to play. The game is a ratchet-scrolling shoot-em-up with Wicket moving slowly upwards as enemies come towards him. And I do mean slowly as this game moves at an absolute snails pace. The MSX wasn't great at scrolling (another reason not to make a game like this) but this game totally whiffs even using the limitations of the hardware to produce good shooting. 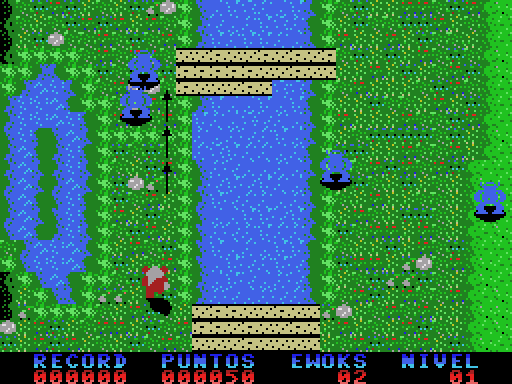 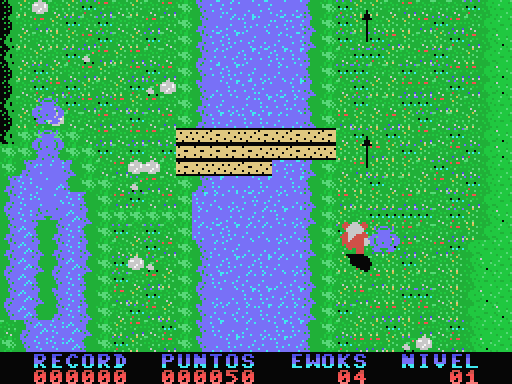 One major flaw of the game is that you never gain any better abilities. You start the game with a spear, you end the game with a spear, and all you have is that one set of spears to throw, over and over, without anything to break up the game play. There are no power-ups, no way to expand your arsenal or change up your character. It's just Wicket, throwing spears, as the relentless march of time slowly takes us all. Oh, and blue dudes wander around to get killed.

There's also the fact that this game is stupidly mind-numbing, of course. For most of the game you can stand at the right edge of the screen and throw spears upwards. Long as you do that, most of the enemies will die or miss you completely. There were times where I just kept a hand held on the attack buttons and slowly took a drink, totally assured that nothing would kill me because nothing could. There's only a couple of enemies types, they always follow the same attack pattern, and then hardly do anything worth noting. It's tedious, not engaging, start to finish.

And, of course, that assumes that the hardware you can play this on can reproduce the sounds of the game. This was an MSX title and that's a console not released in the U.S.. Best as I can tell, if your hardware isn't just right you'll end up with just screeches and bleeps the whole time, a poor mix of computer sounds that are absolutely ear splitting. I want to blame it on my hardware, if I'm being charitable, but frankly I think this was the actual sound mix of the game. Nothing I've found Online has dissuaded me from this.

If you were a kid in Japan (or any of the other regions that got this game for this console) then you had to be sad to see the mess that came on the cart. Anyone expecting even a half way competent Star Wars adventure would have been sorely disappointed by this game. Hell, having suffered through it now I feel like I have to redo my review of Jedi Arena because at least that game wasn't this bad.

The best that can be said about Ewoks and the Dandelion Warriors is that at least it didn't come out in the U.S. If you want to talk about "ruining a childhood" this is the game to do it. The Ewoks have their detractors but I don't think anyone would wish this mess on this dumb little furballs.