Lost in the Forest (Moon)

The Super Star Wars games, when they came out, where a much-hyped trilogy of titles. They brought up a lot of buzz in large part due to the fact that they were "official" products from Star WarsThe modern blockbuster: it's a concept so commonplace now we don't even think about the fact that before the end of the 1970s, this kind of movie -- huge spectacles, big action, massive budgets -- wasn't really made. That all changed, though, with Star Wars, a series of films that were big on spectacle (and even bigger on profits). A hero's journey set against a sci-fi backdrop, nothing like this series had ever really been done before, and then Hollywood was never the same.; it wasn't just that someone bought the license so they could do as they like (as was common with most properties back in the 8-Bit and 16-Bit eras), but this was coming from the Star Wars makers themselves. They were made by LucasArts so, one would expect, they were the true vision of Star Wars on consoles. 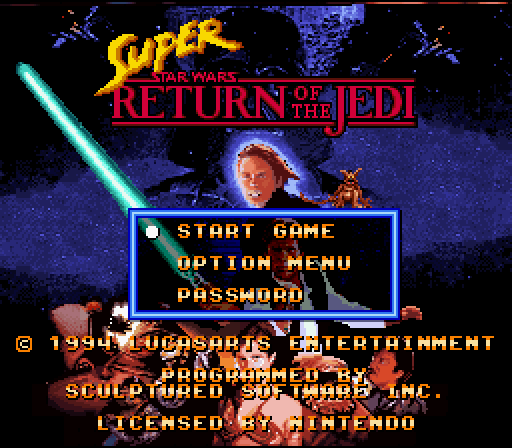 That's why it was so shocking to see that these games just weren't that good. The tone and tenor was set with Super Star Wars, a game that looked really pretty but had some cheap and rather unfair platforming. Things improved a decent bit with Super Star Wars: The Empire Strikes Back, creating a game that was almost playable. One could have hoped that things would have improved again for the third part of the series but, sadly, whatever creative juices the team had going into part two were lost for part three. This final part of the trilogy is just as bad as the original, if not even worse.

As with the previous two entries, the plot of this game loosely follows the story of the film its based upon, Episode VI: Return of the Jedi. We open with out team of heroes -- Luke, Leia, or Chewie, your choice -- heading into Jabba's Pleasure Palace (TM) to save their friend, Han, and beat a hasty retreat. In terms of the game this means we get platforming across the sands of Tatooine (again) before heading inside the palace for arena-style battles, and then a fight across the great sand ship all to defeat Jabba and save Han. We also get one sand-speeder sequence in the middle to throw in a little Mode 7 and break up the platforming.

From there we bounce over to Endor where the second Death Star is being built. We have a chase on speeder-bike through the forests of Endor, and then we fight through the Ewok village (now playing for two stages as Wicket) before we head to the shield generator base on the moon. As most of the heroes fight their way into the base, Lando pilots the Millennium Falcon through the stars to battle TIE Fighters, clear obstructions off the surface of the Death Star II, all before flying in to the Not-a-Moon to destroy the base once again. Oh, and Luke takes on Vader and the Emperor before beating his own hasty retreat.

After that actually playable Super Empire Strikes Back I had hoped that the series was on an upswing but, after suffering through this game, with its repetitive game play and unfair challenges, it's pretty clear that the second title was an anomaly. Super Return of the Jedi is a return to the cruddy form of the first game. I was really curious as to why: what happened between the three games that one was better than the other two. I do have a theory. 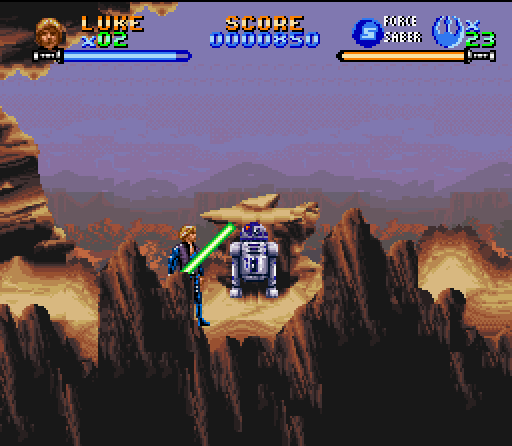 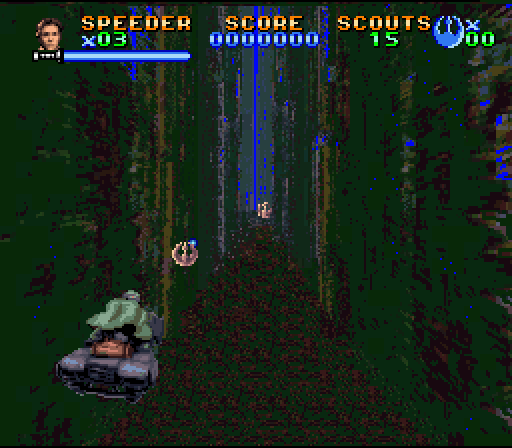 The first and third games were programmed solely by Peter Ward. He also handled programming duties on Super Empire, but he shared that role with Ryan Ridges and I think (and this is just a guess) that the two working together helped them each create new ideas and try for betting things. Certainly it made for a more balanced and even game overall. Ward, though, had to handle programming duties on his own for the third title and it feels like he went back to what he knew without a lot of testing and playing it himself just to get the game out on time. That would make sense considering this game feels like a real step back for the series.

When I say the game is tedious and hard I mean that it has an over-reliance on the worst aspects of this series. To start, platforming is confusing and unfair. Most of the levels of meandering mazes with no clear indication of where to go or what to do. Super Star Wars had this at times as well, but it almost feels like it was made even worse in this third title. Some of the stages are so confoundingly weird and bad they reminded me of levels from the Bubsy series (a comparison no one wants to make). The fact that so many stages are seemingly designed to meander you around so you can collect Jedi Tokens (the equivalent of Mario coins or, to carry the example, Bubsy balls of yarn) did not help the matter at all.

Beyond that, the game's layout once again expect you to make blind jumps to platforms below your character, time and again, assuming you'll learn the layouts. This isn't fair game play. Creating levels so convoluted and meandering that your players have to learn the whole stage, start to finish, for ever level of the game is bad game design. You need to give indications of where they should go and, more importantly, where they should jump. Cheap deaths due to falling in a pit or onto spikes aren't fun. That's obnoxious.

On top of that the combat has somehow become even dumber this time around. In the past you had to shoot and swing your saber and pray you could survive (which wasn't great but it did require strategy). Now, though, every character (except for Han) has a sinning double-jump that does damage while they're in the air. That, coupled with over-powered Force powers means that every battle is a cake walk. Just jump around, turn on invincibility once in a while, and everything dies. The levels are a struggle, the bosses are not. 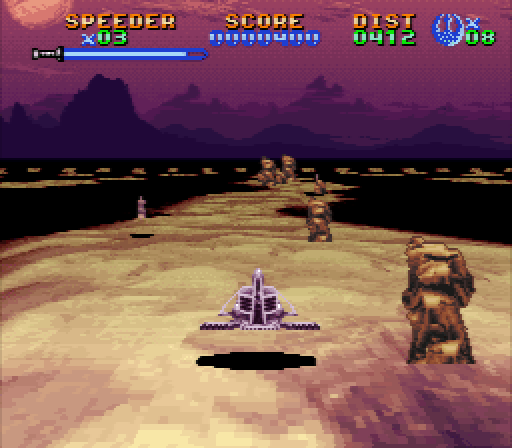 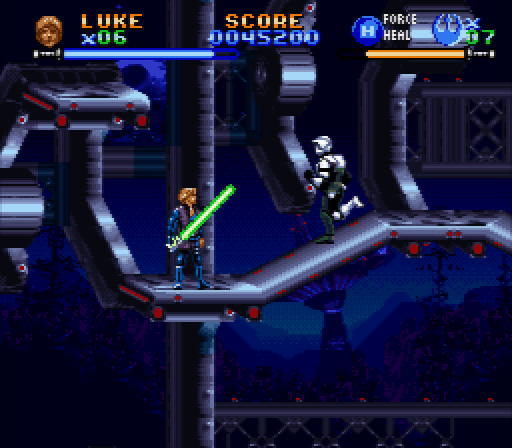 The worst part of the game, though, are the Mode 7 sequences. The game starts things off well enough with a race across the sands in the speeder and, instead of doing any kind of combat here you just try to avoid falling in pits and dying. This was the best sequence of the game. But then you have to suffer through the Endor forest chase, a mess of three scrolling Mod7 layers that made it impossible to see the dangers coming ahead. There was a Millennium Falcon battle where you ship is a fixed point and you spin around trying to shoot TIEs (which can shoot you from any angle making this a tedious and awful affair). Another flying sequence throws so many objects at you you're constantly dying to enemy spam. And then the Death Star core flight is awful. Just plain awful. It's practically unwatchable, and it goes on for over five minutes.

In short, this game is garbage. It is very pretty garbage, make no mistake, with the same high production values when it came to graphics and sound that the previous two games had. But making garbage look pretty doesn't change it at its core. Over the years these three games have gained this aura, a tragic and spectacular failure for the SNES era. I knew the first game wasn't great (from experience) but I'd wondered just why it was gamers didn't really talk about these titles much anymore. The reason is simple: as individual games, and as a trilogy of titles, Super Star Wars is just straight up bad. It just so happens that Super Star Wars: Return of the Jedi is the worst of the set.

With that being said, if you were someone following along with the 8-bit games in the series -- Star Wars '91 and Empire Strikes Back '92 -- you could at least complete your "8-bit" series with Super Return of the Jedi. Editions for the Game Boy and Game Gear were released despite retaining the "Super" branding for these ports. It's an odd addition but does at least make sense from LucasArts' perspective. Still, I doubt anyone with those consoles would have been happy settling for this bad game.