A Man of Scum and Villainy

I have noted before that I'm generally not a fan of prequels. These productions, in general, are designed to fill in some back-story that we sort of already know because we'd gotten details of it before in the previous work. Prequels normally aren't able to do more than broaden already known details without adding much more to the proceedings. Added to that is the problem that once you know a character will be safe to survive to the next (previous) film, it drains a lot of tension over if they'll "somehow" survive their prequel. Sure, distant prequels can sometimes work, but you have to really work to make a story of a prequel work within the bounds of the framework you already designed. 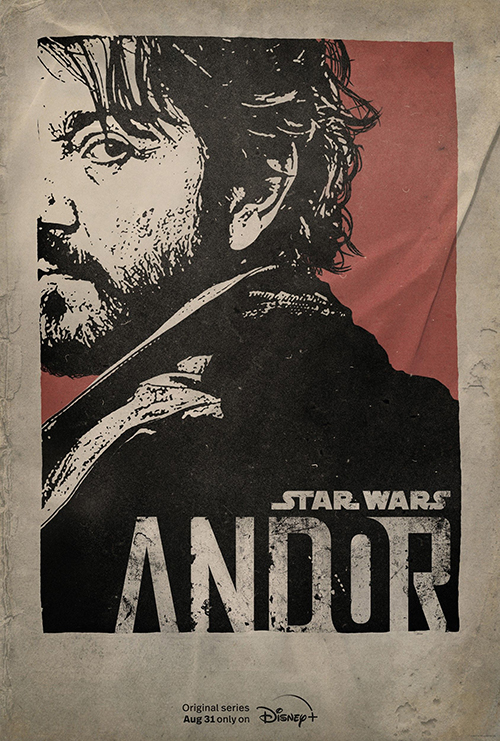 One prequel that did work, though, was Star Wars: Rogue One, a tale of the crew venturing to gain the plans to the original Death Star (kicking off the whole story of Star Wars: Episode IV: A New Hope). We already knew they would be successful in their plan (because Episode IV) but not only did we not know the "how" of it all, we also had a new cast of characters unconnected to anything we saw before. Whether they lived or died (or maybe were thought dead but actually survived) was up in the air and the film gained a lot of tension from that. Plus it gave us new sights and locales not seen in Star WarsThe modern blockbuster: it's a concept so commonplace now we don't even think about the fact that before the end of the 1970s, this kind of movie -- huge spectacles, big action, massive budgets -- wasn't really made. That all changed, though, with Star Wars, a series of films that were big on spectacle (and even bigger on profits). A hero's journey set against a sci-fi backdrop, nothing like this series had ever really been done before, and then Hollywood was never the same. before and that went a long way towards selling the conceit of the prequel.

Creating a prequel to a prequel, though, that does sound like a losing proposition. When the House of Mouse announced their new Disney+Disney's answer in the streaming service game, Disney+ features the studio's (nearly) full back catalog, plus new movies and shows from the likes of the MCU and Star Wars. focused on Cassian Andor (last seen dying in Rogue One), it seemed like maybe they were stretching things a tad too far. Did we really need another story with Andor when we already knew his fate? Would could this new series, Star Wars: Andor possibly give us that would justify this tangled mess of storytelling. I am happy to say, though, that the premiere at least manages to find a way to be compelling all on its own. It is focused on Andor, yes, but between giving us a whole new cast of characters around him, and putting him so far back on his timeline, showing us details we actually didn't know about the eventual hero, coupled with new storylines and locales to explore, Andor does seem to justify making a prequel to a prequel. Just this once, though.

In the first three episodes, which all dropped on Disney+ September 21, 2022, we're introduced to a very different version of Cassian Andor (Diego Luna) than we knew back in Rogue One. Instead of being an agent for the Rebellion, Andor here is a scummy scoundrel. Apparently on a mission to track down his missing sister (who, we learn, he was taken away from over a decade before), Andor get in trouble with low-level Imperial security forces after being forced to kill two agents when they harass him one night. Of course, whether it was justified or not, someone in the Empire will get a bug up their ass about two people dying. That someone would be uptight Deputy Inspector Syril Karn (Kyle Soller). Once Karn gets a whiff about the murders he simply can't let it go, even when his boss says to drop the matter (because the two agents obviously brought their deaths upon themselves).

Andor, freaking out about killing two people, goes to his friend Bix Caleen (Adria Arjona), a legitimate junk dealer (and illegitimate black market dealer) for help selling a key bit of salvage, a Imperial Security Box, that he's had stashed. The money he could get for the device would let him leave the planet until things cooled off at home. This would mean leaving his surrogate mother, Maarva Andor (Fiona Shaw), and droid B2EMO (Dave Chapman), but Andor also doesn't want to get them killed. Thankfully, Bix is able to put Andor in touch with her dealer, Luthen Rael (Stellan Skarsgard), who comes to Ferrix to talk to Andor and buy the part. What he's really looking for, though, is talent, someone to train as an agent of the resistance. With Rael's help Andor might just escape the low-level Imperial agents and live to con and steal another day. In the process he might also just find the future he's been looking for all along. 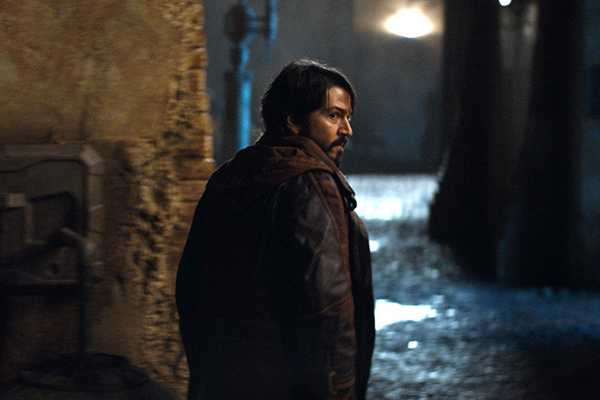 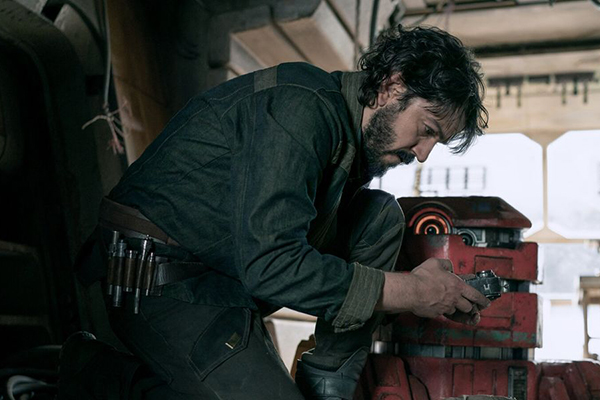 On it's face it does seem silly to do a prequel about Cassian Andor. We know where he's going and who he'll be in five years time because his fate is sealed at the Battle of Scarif (as per Rogue One). We know he's going to become a Rebellion agent, that he's going to do things he finds questionable for the greater good of the galaxy, and then he'll sacrifice his life for a cause that's worth, but that also means that any danger he could be in during this series is mitigated. He can't die here because he has to die elsewhere years later. Thankfully the series understands this and only keeps some of the focus on Andor.

What these first three episodes are really about is fleshing out this part of the <Star Wars universe. To start, we get two new planets not seen before: Morlana One, an industrial planet with a large mining workforce, and is also the home base for the Pre-Mor Authority (effectively low-level Imperial security goons), and Ferrix, a planet that seemingly has a lot of the Empire's waste dumped on it, but also has a rich culture that we only get glimpses of. These two new planets help to enrich and deeper our view of the galaxy as not everything is simply Rebels and Empire fighting against each other. That's a view we don't often get in this universe.

Populating Ferrix we also get Bix Caleen who is, in effect, our second protagonist (at least for these first three episodes). She's best friends with Andor and cares deeply about him (but not romantically). She helps him where she can in the hopes he'll somehow get his shit together so he can be reliable. When shit goes down, though, she has both the skill and knowledge to handle her business and, due to events in the first three episodes, she might just end up motivated to start taking an active hand against the Empire.

In fact, it's possible this series could be establishing one of the many growing spots where the Rebellion first grows. As we see, the citizens of the planet generally live their lives free of the threat of the Empire. Once the security forces show up, and start causing trouble, destroying property and acting like they own the place, the throw off the lives on Ferrix. The citizens get angry and while they don't take an active hand against the Imperial goons, it's not hard to see events here escalating, especially as Karn flails around and fails to capture Andor all while causing a huge amount of carnage. 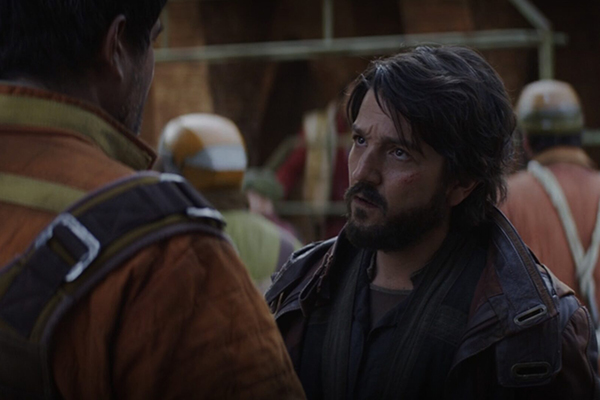 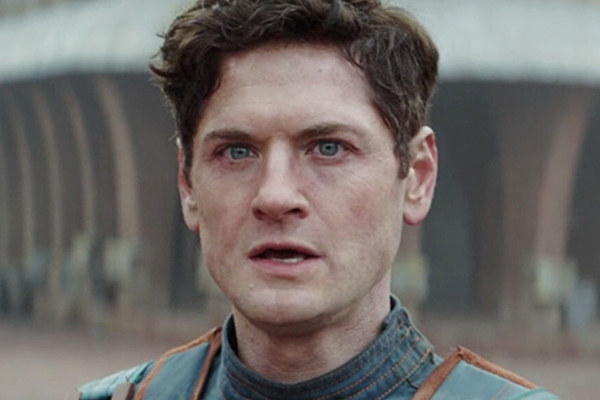 Frankly, I wonder if this show is really going to be about Andor. It's possible it much more about the Rebellion with Andor acting as the agent of chaos that keep bringing the Empire around. The events on Ferrix could spell serious trouble for the planet and I wouldn't be shocked if Karn's failed mission brings the heat down on this planet, wholly changing their way of life. That seems like a probably action for the Empire considering what we know about how that fascist government is run. No disobedience, no stepping out of line, or everyone on the planet suffers the same fate. We'll see what happens over the course of the next nine episodes as this season plays out.

Suffice it to say, though, there's a lot here that really works whether or not you care about Andor's fate at all. What does help, though, is that Diego Luna is fantastic in the role, finding layers to add to his character as he slowly grows from low-level con artist to something more. The potential is there in his performance and it's interesting to see him grow his character more fully. But then, everyone in this cast is great, from Arjona to Skarsgard and even Soller playing a completely in over his head idiot security agent. Everyone adds to the richness of this world and the show.

I think that's the best thing to take away from these episodes as we go into the rest of the season: it's richly constructed. Everything in this series has a lived in feel. The worlds feel fleshed out, the characters fitting into their lives within, but what I love is that so little is explained. There are a ton of details, big and small, that make up Ferrix and the show let's them pass by because anyone living on the planet would just go on with their lives as if everything we're seeing was a fact of life (because it is). The show trusts us to enjoy all the details, to get lost int he world without having the story put a point on it for us, and that makes this show feel so much richer for it. It's stunning, really.

I've seen reviews already saying, "this is how Star Wars should be." So far I do agree (although we will have to see how the season plays out from here, of course). This is a finely crafted story that gives us a new perspective on the Galaxy Far, Far Away. If this show can maintain the solid world building and storytelling of these first three episodes than we might just have a story that finally, truly, lives up to the Saga's original trilogy.