Building a Holiday Together

There is probably no part of the Star WarsThe modern blockbuster: it's a concept so commonplace now we don't even think about the fact that before the end of the 1970s, this kind of movie -- huge spectacles, big action, massive budgets -- wasn't really made. That all changed, though, with Star Wars, a series of films that were big on spectacle (and even bigger on profits). A hero's journey set against a sci-fi backdrop, nothing like this series had ever really been done before, and then Hollywood was never the same. media empire more reviled than the 1978 Star Wars Holiday Special. It was so hated upon its released that George Lucas had it actively scrubbed from the franchise, vowing that as long as he was alive it would never see an official release on home video (or back on TV), a promise he has kept. Fans can bitch about the Prequel Trilogy and the Sequel Trilogy all they want, but no one has actively gone out of their way to block their release ever again. Only the Holiday Special gained that level of ire, a special seemingly designed to ruin everyone's childhood (if we want to lean into hyperbole). 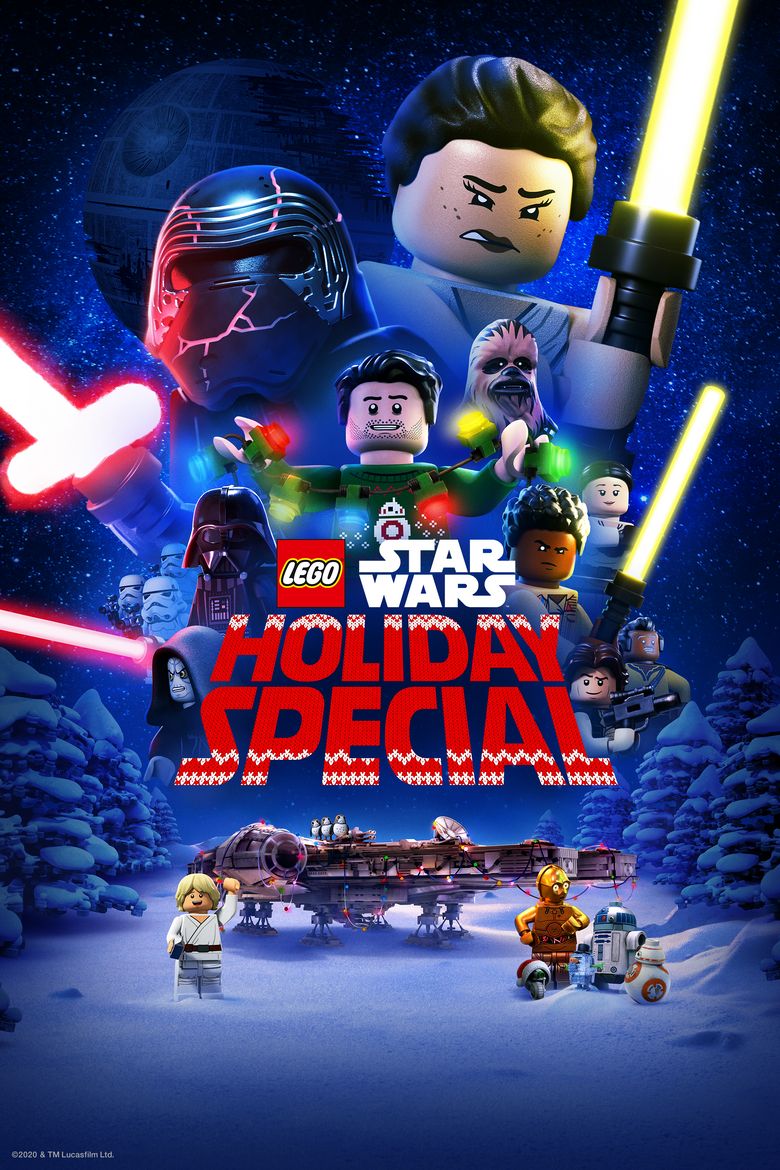 It's a bold choice, then, for Disney to invoke that name for the first of (seemingly) many Lego Star Wars specials for the streamer. Lego Star Wars is, of course, a growing brand within the Lego brand. Started when Traveler Tales took the Lego toys (which included a large number of Star Wars toys) and made a very successful action platforming game from the various Lego pieces. Since then the brand has grown with more games, more toys, and a bunch of direct-to-video, direct-to-cable, and direct-to-streaming specials and series. It's a media empire all its own.

Since taking over Star Wars Disney had looked for any way to expand the franchise into the various Disney properties, so making Lego Star Wars specials for Disney+ was an obvious next step. To the streamer's credit, this Holiday Special isn't a train wreck like the original 1978 special. This is an amusing, at times funny, and largely innocuous little holiday special that gets to job done without being all too memorable in the long run. It'll give parents something else (something nondenominational) to put on the TV round the Holidays and it'll give little kids something to laugh at for an hour (if it keeps their attention that long). It's not great, but it does what it sets out to do.

In the special Rey (voiced by Helen Sadler), Finn (Omar Benson Miller), Poe (Jake Green ), and Rose (Kelly Marie Tran) head to Kashyyyk, the Wookie home world, to celebrate Life Day (the in-cannon substitute for Christmas). Poe wants to throw the very best Life Day celebration ever for Chewbacca and his family. Rey, though, has other concerns as she watched Finn try, and fail, to follow the lessons of the Jedi during their training. She blames herself for the issues, while not hearing Finn's own doubts, leading her to try and find some solution to what's missing from her teaching.

Having studied the ancient Jedi texts, Rey packs up and heads to a Jedi temple on another planet, with promises she'll be back in time for the Life Day party. At the temple (where she's joined by BB-8) she finds a magical Jedi crystal that acts as a key to time and space. Suddenly Rey finds herself bouncing from era to era, seeing key moments in the lives of the *edi (all moments taken from the movies). She also tumbles across Emperor Palpatine (Trevor Devall) and Darth Vader (Matt Sloan), ,who decide they want to steal her magical key so they can take over not just all of space but all of time as well. It'll take a furious battle across all the eras, and maybe just a little help from Luke Skywalker (Eric Bauza) to save this Life Day. 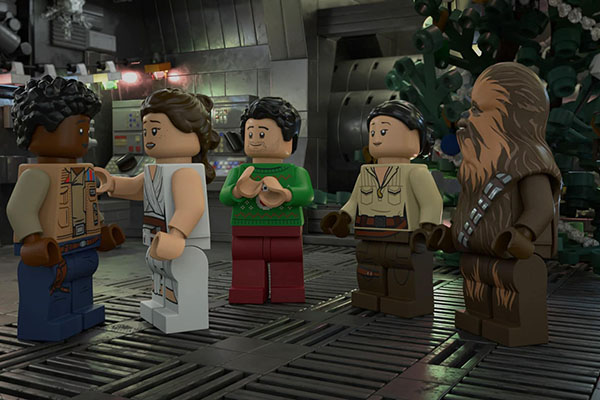 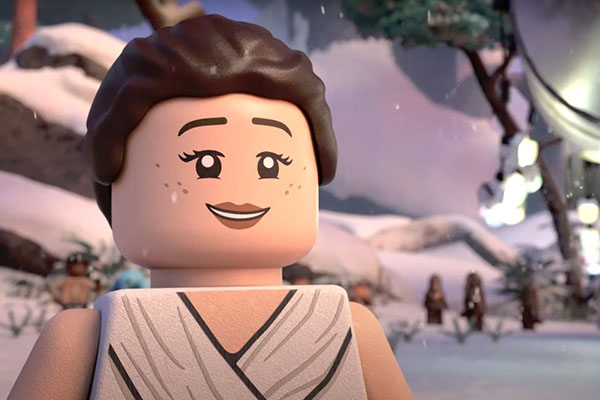 Set after the events of Star Wars Episode IX: The Rise of Skywalker, the Lego Star Wars Holiday Special acts as a semi-sequel to that film. It picks up on the thread of Finn having Force powers (only hinted at in the movies), letting Rey grow into the role of Master to Finn's "Apprentice". It suits certain themes of the previous films and does nicely pay off on the idea that Finn has the power of the Force within him. I appreciated that grown for their characters, for sure.

With that being said, one of the major plot threads of the Sequel films was that neither the Jedi nor the Sith were truly right about the Force (a point made very clear in the reviled, and largely scrubbed from continuity, Episode VIII). Having Rey just blindly continue the exact training of he Jedi without making it her own seems to countermand some of those plot points Yes, it lets Rey have a cute adventure through time and space but it feels out of step for the growth of the series.

The time travel itself is pretty amusing. Rey goes from just watching on the sidelines as important Jedi moments happen to accidentally becoming an active player in those scenes, quickly causing chaos and carnage in her wake. She even starts dragging making of the characters from across the timeline along with her until there's a big battle of everyone fighting everyone else. It's amusing in that, "smash all the toys together," kind of way. That pays off the toy aspect of Lego and it cannot be understated.

It also shows that the special (as with all Lego Star Wars media) doesn't feel the urge to stick too closely to the "sacred texts" of the original films. Letting Rey cause carnage while the characters say silly things and crack jokes, speaks to the Lego ethos. These are toys based on your favorite films and you should be able to have fun with them. The video games got that and, thankfully, these specials manage to continue that trend again. 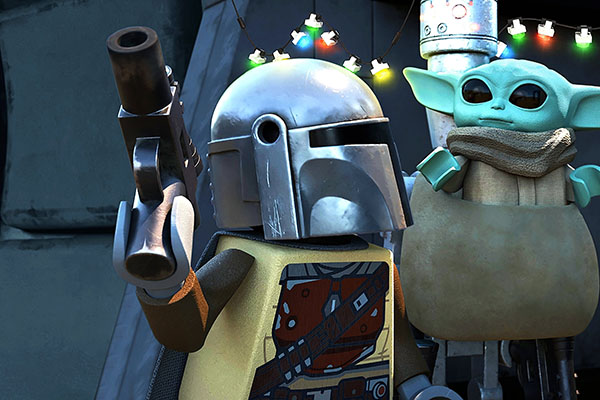 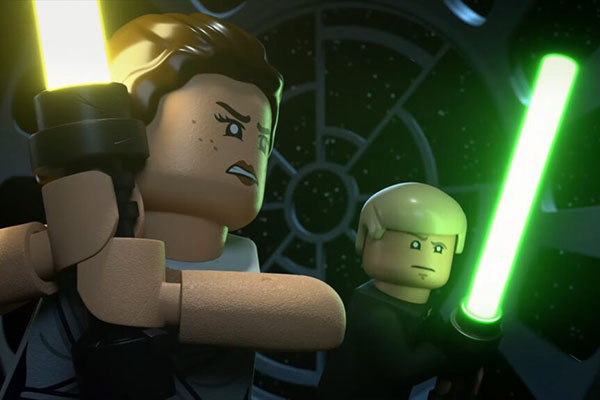 With all that being said, I do feel like the whole "Life Day" aspect of the special falls flat. Yes, it's there for background, and it lets the characters put up decorations and trees and the like, but it really doesn't serve the plot in any great capacity. Rey goes off and has her adventure and the rest of the tea basically just sits on the sidelines, cooking food and decorating. The B-plot of the special is less than thrilling and hardly matches the fun and carnage had with Rey. It would have been nice for her to have solid characters moments with Finn as they played Master and Apprentice in the Jedi Temple together. In fact, if we want to get pedantic, other media (like Rebels) has shown that a master and an apprentice are required to even gain access to the temple. This special doesn't really hit that continuity mark either.

Getting really out into the weeds, some of the characters are truly under-served by this special. Poe, for example, doesn't act at all like his character in the Sequel Trilogy. He could be any character, honestly, and it would have played the same the way the special treated him. That's still better than poor Rose who doesn't even get named in the special, and basically standard around to spout dialogue at the two boys, who get way more to do. Once again, Star Wars fails Kelly Marie Tran.

But, as I said, a lot of those issues are only noticeable if you're watching this special to really care about the special. If all you want is a bit of silly fun to put on for your own Life Day (whatever you celebrate and whatever you call it) then this special does that just fine. It's not great (and I might struggle to even really call it good) but it is amusing enough. Kids will eat it up and adults will at least breathe a sigh of relief that they have something new to pop on the screen for an hour during the season. Something new that hasn't been watched to death, which is also just good enough to pass the time, cannot be understated.