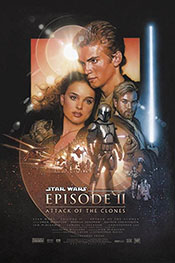 The Republic is in trouble. Dark forces are working against the galactic government in an attempt to wrest control away and rule the universe.

Or, at least, I think that's what the movie was about. To be honest, neither this movie (or Episode I) really had cohesive enough plots that it felt like I ever could accurately say "this is what this movie was about".

I mean, here's what happens in the first part of the movie. Anakin Skywalker (new Jedi knight) and Obi Wan (his mentor) have to protect Padame (the queen from the first movie, and now the damsel in distress/senator of her world) from an assassin. After a failed assassination attack, the two Jedi fly off after the would-be attacker, capture her, only to have her killed right in front of them by some other attacker.

This leads the two Jedi to split off -- Anakin to protect Padame on some remote world (where all the women run around in god-awful productions of the Sound of Music), and Obi Wan to follow a trail of evidence that leads him to a ready-made army of combatants that can be used against the bad guys that are trying to destroy the Republic.

Then there's a lot of random fighting. There's no real conclusion to the story, which, sure there's going to be a sequel (Episode III), and everyone knows it, but that doesn't mean it doesn't need some kind of conclusion.

That major gripe aside, there's more wrong with Episode II than just a boring, convoluted story (that goes nowhere). The things that made the Original Star Wars and The Empire Strike Back great, aside from special effects, are lacking here. The characters, especially Anakin, seem like cardboard on screen. They had Samuel L. Jackson, a man that eats so much screen he has to have his stomach pumped twice daily while on set -- and even he was boring to watch.

I don't blame this on the script, although it didn't help. I blame this on the director. You can argue "you're just a Lucas hater" all you like, but it comes down to a basic fact: the Director is responsible for getting the performance he wants out of his actors. If it's on screen, it means two things -- either he couldn't get them to act (which, with Anakin I'd believe). Or he was happy with the performances he captured on film.

The only person proving they were at all capable of acting their way out of a paper bag was Ewan McGregor, who did a phenomenal Obi Wan (as in, acting the character just like Sir Alec Guinness did). He's worth watching... well, him and Yoda, but I'm not going to ruin the Yoda part here.

Getting back to the rest of the cast of actors, they aren't assisted in any way by the terrible script which was, again, Lucas. The dialogue is flat, and at times boring. The plot is (as I mentioned) convoluted and dull, and most of the "twists" are thrown in simply to justify the plot threads that lead into the third movie.

And then there's the biggest problem I had with the movie: this movie had to sell us on the fact that Anakin and Padame were falling in love with each other (so that they could mate and have Luke and Leia from the original trilogy). It doesn't. The whole love story between Anakin and Padame was so flat I couldn't tell why they even bothered hanging around each other. If they'd had any onscreen chemistry, even just a steamy gaze once, it would have gone over so much better.

All the awful baggage aside, if the movie does one thing right, it's the action (when there is action). There are a lot of slow points in the movie, but the few good action scenes are a blast to watch. There's plenty of eye candy and cool cinematography to carry you through the last act of the film.

I know, this is a heavily critical review of the movie. I can't help it. Episode I was so bad (really, truly bad), that maybe I just had better expectations for Episode II. Maybe I thought Lucas would learn from his mistakes and make the movie (out of Episode II) that Episode I should have been.

If you're a fan of Star Wars, you've already seen it. Me -- I'm not even going to bother buying the movie.