The arcade experience was (and is) a communal experience. When you were there, playing on one of the big, chunky monitors, you wanted to show off your glory. You wanted to show you could beat a game while, at the same time, having others watch your mastery of that entertainment. And it was made better with others playing alongside you, making that communal event feel even grander, the social aspects of both of you mowing through enemies all the sweeter because it was shared with someone covering your back. 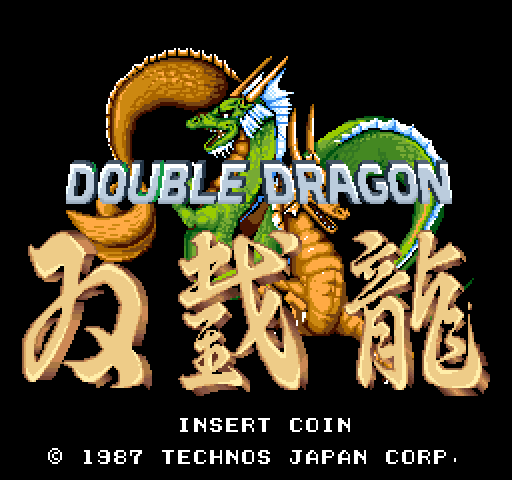 That was, of course, the power of the Teenage Mutant Ninja Turtles arcade game, with four players all battling together against wave after wave of goons, but to get to that game the brawler would have had to come from its humble roots back in Renegade, but that path straight through one of the biggest games of the genre: Double Dragon. Without that co-op, side-by-side fighter the rest of the genre doesn't occur.

Developed by Technos and overseen by Renegade's producer Yoshihisa Kishimoto, Double Dragon was designed as the spiritual sequel to Renegade and it's own series of games under the "Kunio-kun" titles. Where that original series went down a path of dodge ball, Double Dragon would keep the tone serious, doubling down (if you will) on what worked in Renegade to push the fighter format forward.

Everything about Renegade is expanded in Double Dragon. Instead of single arenas to fight in players were now given long, expansive, scrolling stages (called "missions") to move through. Instead of just simple, context-sensitive buttons, Double Dragon had special moves you could perform by pushing buttons together. And, instead of being limited to just a single fighter, this game gave you two at once for double the fun and the glory.

For the time Double Dragon was quite the marvel. It had big, chunky sprites for both the heroes and enemies. These were detailed (for the era) sprites that looked more like real people than back in Renegade. The whole arcade game felt lush and detailed with so much going on. It had life to it that its predecessor lacked, making this feel like not just a sequel but a whole new experience. Renegade may have kick-started the fighting genre but once Double Dragon came out, that first title suddenly became a distant, fading memory. 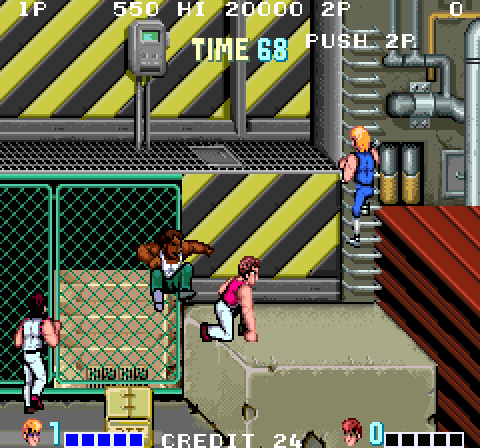 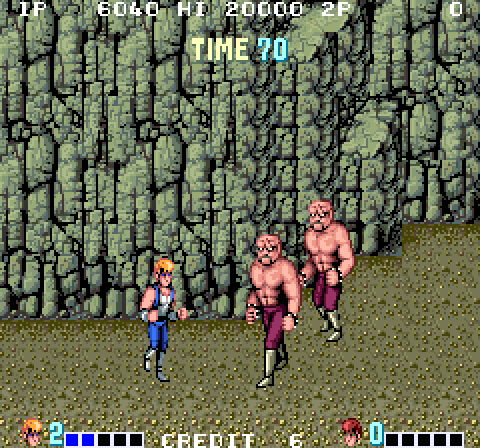 There is a lot to like about this first game in the Double Dragon, from the creative stages, the weapons to use, the variety of enemies, and the rocking tunes. This was the whole package and it blew every other fighting game of the era away. That said, the game wasn't perfect. It could often feature horrible slowdown, especially when a bunch of enemies were on screen along with your partner, and this in turn lead to plenty of moments where the computer could easily get the jump on you, leading to your death.

Even without the slowdown the game could be hard. The mobs of enemies weren't exactly smart, and could easily be led into A.I. patterns that would let you turn the tide. But there were so many enemies, many of whom had quick attacks that could block and overwrite your own. Worse were the giant bad guys, like Abobo, who could easily destroy you if they laid a hand on you. Your average player probably got about two minutes of real game play out of a quarter before they were sent right back to the start of Mission 1 (which, frankly, suited the arcade operators just fine).

In some respects the NES version of the game does manage to improve upon the arcade release. The sprites are smaller, yes, and the colors and detail aren't as robust as the arcade edition, this is true. At the same time, though, the game didn't suffer nearly as much slow down as the arcade edition, so the game flows more smoothly and, in general, just had a better vibe to it. For the early stages at least the NES game feels like the better edition of the game, for sure.

That all changes in the later stages, though. Here the game introduces platforming into the mix, a bad fit for a fighting game no matter what but made worse when dealing with a controller that only had two buttons, both of which were already mapped to the punch and kick button. To be able to traverse the platforming sections players had to use a finicky jump kick (pressing A and B together) which, traveled in a fixed arc. It was very easy to overshoot, or undershoot, or simply never get the jump kick to happen, leading to many, many, many deaths in these sections. 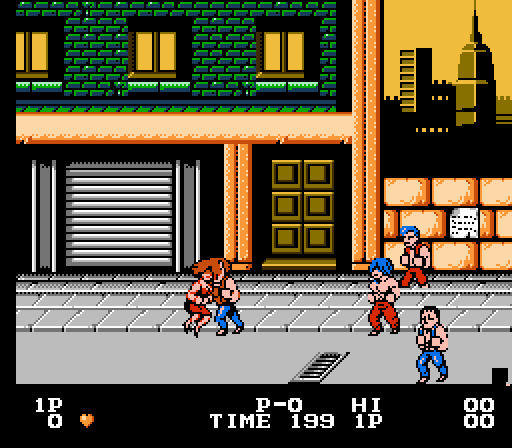 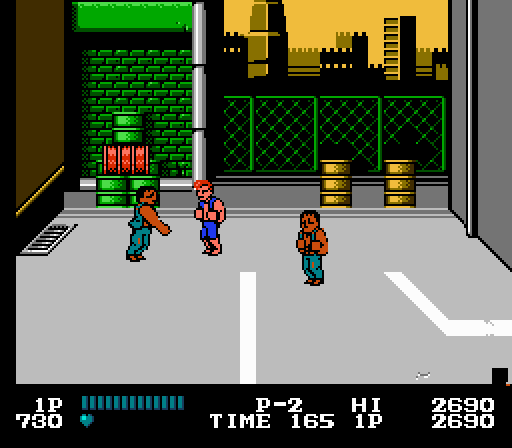 Additionally the ANES game also introduced an RPG mechanic. In this version you'd unlock all the cool moves Jimmy (and Billy) could perform by killing enemies and gaining levels. On the one hand this did encourage battling but, at the same time the arcade version didn't have this limitation, letting you play with all the cool jump kicks, knees, and elbows you wanted right from the beginning. It leaves the heroes feeling pretty weak early on, but worse it also meant you had to earn that critical jump kick if you wanted to make it through the later stages and there was simply no avoiding that or you'd just die.

Hands down, though, the worst part of the NES game was that it removed the "double" part from Double Dragon. While you could play the game two-player it wasn't simultaneous. Instead, Player 1 would go first until they died, and then Player 2 would go starting all the way back at Mission 1 and going until they died, back and forth. The whole reason to play this game in arcades, to have an ally that would cover you so you could find glory together, was lost when it hit the NES. Later console games in the series restored this but for the original game to lack proper co-op practically ruins the whole game.

Frankly, despite its often horrible slow down the arcade experience is the way to go to play this original title in the series. I wouldn't go so far as to call it a masterpiece, not now, but when it came out it certainly felt like a revelation. And from here the fighting genre would only get better and better.