A Big Crash, But Not a Burn

If you were a Western fan of the Kunio-kunStarting as a fighting game befoe spinning out in sports titles (and other adventures) of all shapes and sizes, the Kunio-kun series is one of the most diverse, and hilarious, to ever grace both sides of the Pacific. series (if you even realized it was an official series and not just a goofy house style on the part of Technos of Japan) I have to think that Crash n' the Boys: Street Challenge felt like an odd fit for the series. Sure, there had been some weird entries in the series so far -- Super Dodge Ball, Nintendo World Cup -- both those games felt like thin excuses to cause more fighting outside of the more traditional beat-em-up games like Renegade, River City Ransom, and Double Dragon II on the Game Boy. 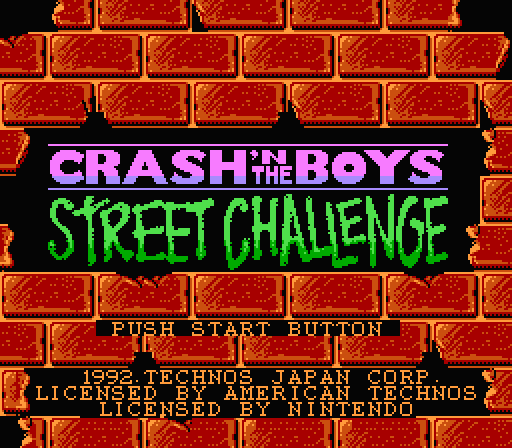 Street Challenge, though, certainly feels like something different. Although ostensibly a sequel to the only-in-Japan Super Awesome Field Day, which did feature a ton of shit-smacking action, Street Challenge doesn't feature a ton of events that actually required you to take on another player with your fists. And if you didn't know that previous track and field title even existed then Street Challenge had to feel even weirder indeed. I know playing it as a kid, back when it was out on the NES, this game felt very strange. Fun, yes, but really weird, too.

Like Super Awesome Field Day before it, Crash n' the Boys: Street Challenge (or, as it was known in Japan, The Astonishing New Records of Nekketsu! Distant Gold Medal) is a sports-based mini-game collection. Four rival high school teams compete against each other in a series of events to see who can earn the most medals (cash) and crown themselves the king of the awards ceremony. Play well and you'll make it to the gold. Suck and you'll be eating street.

Thee four events in this game are: 400 Meter Hurdles, Hammer Throw, Roof Top Jumping, and Swimming and Fighting. Of those four, two are played head-to-head against another opponent, where the goal is to beat the other player to the finish line (or simply to death) so you can move on to the next round and do it again, and again, until you get the gold. Of the two, the Swimming event is probably the better one. Here you battle against thee foes, one at a time, to be the last man standing and it feels entirely under your control how well you do. Punch, kick, and pull the foes under water to drown them, all so you drain their health bar and eventually send them to a watery grave (well, okay, just so they drop out of the swim race).

Hurdles, but comparison, is a much less interesting and less fun event. The goal, as you'd expect, is the jump (or roll through) hurdles and be ahead of the other player when you cross the finish line. As you break through hurdles they'll crumble apart and you can use them as weapons against the other player, damaging them further. This is all fine and good but, likely due to the limitations of the NES hardware, the race is never really an actual race -- the game will rubber band the other player close to you, meaning it's less about being ahead for the whole match than just right at the end. It feels more like luck than real skill, making this a brainless time-waster. 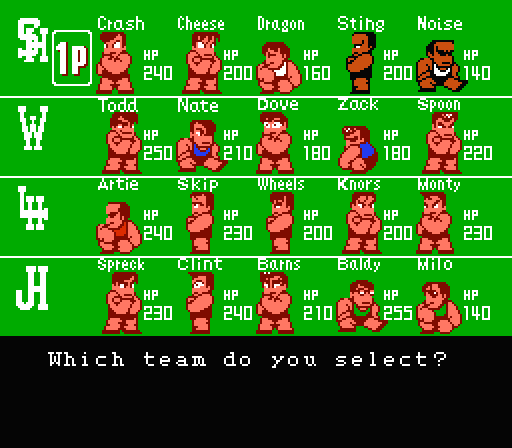 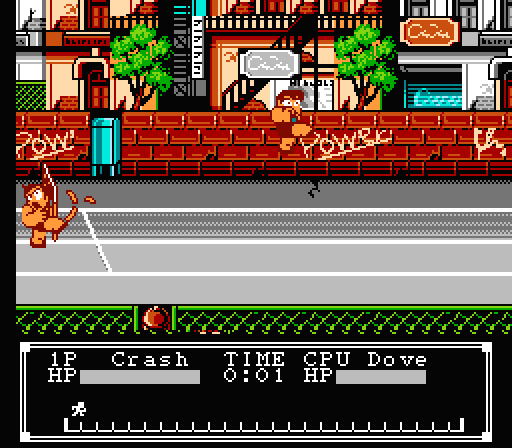 The other two games are much less interesting. Both are solo-mode matches where you play for a single round and simply try to do as well as you can. Hammer Throw is, essentially, golf with a thrown ball and chain. You spin around, chuck the ball at high speeds, and watch as it travels along a course before, eventually, making it to the hole at the end. Frankly, this game is a lot of fun and if it had been a full title all on its own, with multiple courses to play through, I would have enjoyed it. As a single course, though, and no extra holes to play, the game feels rather shallow. Fun, but shallow.

That's still better than Roof Top Jumping, though, which is an absolute nightmare to play. The goal is to go from roof to roof, jumping, pole vaulting, and riding unicycles along wires, all until you reach the end of the set course. If you played this enough, got down the various mechanics, and memorized the course then you probably could ace it every time. From experience, though, most players won't even develop that skill on it because they get one attempt, they'll fail, and then the game will move on to Swimming. Trying to control the pole vault, or know you're supposed to use the unicycle instead of the provided pole, at any specific roof, just leads to a lot of deaths and much anger from the players. This event sucks.

That does speak to one issue this game has: there's no way to practice the events. The only way to "get good" at this game is to play it over and over again, but considering most of the events are shallow, in one form or another, it's hard to see kids playing it over and over again. There are great ideas in each mini-game (well, maybe not the rooftop adventure) but the overall experience never properly develops into something interesting to play, over and over again. A practice mode would have helped some since then you could learn the events without worrying about your team's score, but that wouldn't change the fact that some events are too long, others are too short, and none of them are well balanced at all.

The game does try to help you out some, giving you shops you can hit between games to get power-ups that will help you in the next event. These are very useful indeed, but if you tragically fail at one event then you won't really have the money for the next event, and that will only drag you down further as the game progresses. Once again it's something that seems cool in theory that, instead, drags the game down further. The balance is off, and while I like the power-ups I think they should have been bonuses you could collect along the way in an event. That would have made things more fair for all players and helped the balance of the game a lot. 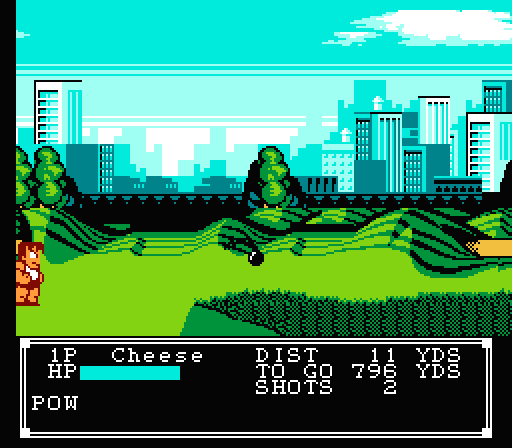 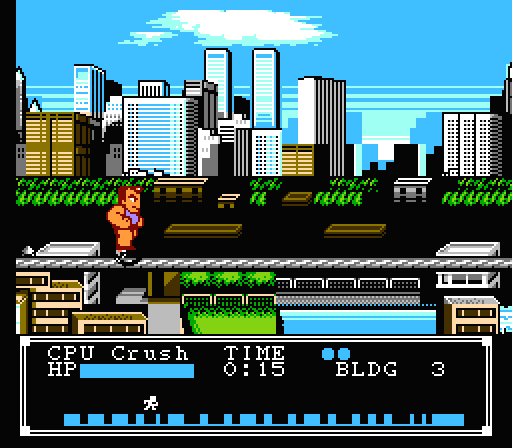 And, going back to review all the games in this compilation, I realized there's one more event I completely forgot about: Judo Challenge. Now, here's where you say, "wait, there is fighting in this fighting-adjacent game," and, yes, technically that's true. But it's terrible. Instead of letting players brawl it out like in standard Kunio-kun games, the event introduces a kind of grappling with special move selector. It's slow, it's annoying, and it's really not any fun to play. The Judo event is so bad I wiped it from my memory, and you should, too.

I do want to be fair to the game. Technos put a lot of effort into this, that's clear, making five playable games that don't have any glaring flaws (like, you're not going to soft-lock in the middle of Hurdles, for example). And when you compare the two editions, Japanese and English side by side, you see that they really worked over the game for it's localization. Both versions look great, with crisp and clean graphics like you'd expect from the franchise. But the U.S. version is basically a whole new game, graphically, with thee stadium events-style from the Japanese edition completely replaced and a downtown, street-wise style for the U.S. version. The two games look so different you wouldn't know they were the same title until you compared the game-play side-by-side.

The thing holding back Crash n' the Boys: Street Challenge is the fact that it just doesn't feel properly polished. It looks good, sounds great, and it doesn't have any game-breaking bugs. At the same time, though, it does absolutely feel like it was rushed out the door, made playable but never balanced in the way a mini-game collection should have been. The ideas of each game aren't enough to carry the whole title across the finish line, leaving players feeling like they spent $50 bucks (back in the day) only to get a face full of hurdle. Even now, while fun, there isn't much to keep modern players come back over and over for this game, even if you can get it relatively cheaply Online.

I will note here that the Game Boy edition, which was released only in Japan, has one event difference with the NES game: namely, the Swimming event was replaced with an Umbrella battle. The two players jump off a roof and have a duel in mid air as they descend to the ground. I can kind of see why this was done -- the Swimming game used a pseudo 3D effect that probably wouldn't have translated well to the Game Boy screen (not in all its luscious monochrome), so a different battle game was put in. That said, has one of the other, shittier events been removed to make way for Umbrella Battle, and Swimming could have been saved, that would have made the Game Boy edition a must buy. Sadly not. 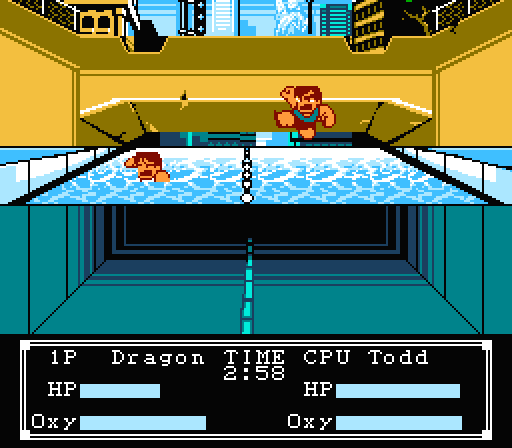 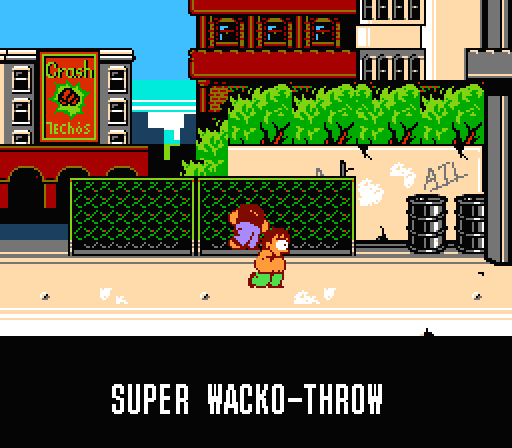 Hell, the greatest legacy of this game is it's nodding inclusion in Scott Pilgrim and its various adaptations (like the movie). Crash n' the Boys is a great name, but Street Challenge just isn't a great game by any measure. Probably goes some way towards explaining why the hockey title, Go Go! Nekketsu Hockey Club, wasn't released in the West as Crash n' the Boys: Ice Challenge (at least not back on the NES, anyway), and why Crash, and his Boys, went off into that good night after only a single game.