Kunio Takes to the Ice!

Considering its start as a brawling franchise, it's interesting just how many sports games have managed to work their way into the Kunio-kunStarting as a fighting game befoe spinning out in sports titles (and other adventures) of all shapes and sizes, the Kunio-kun series is one of the most diverse, and hilarious, to ever grace both sides of the Pacific. franchise. We've already seen dodge ball, and soccer, and then track and field events, and now we can add another sport to the mix: hockey. Yes, Kunio is taking to the ice for a four-on-four slip-n-slide challenge. 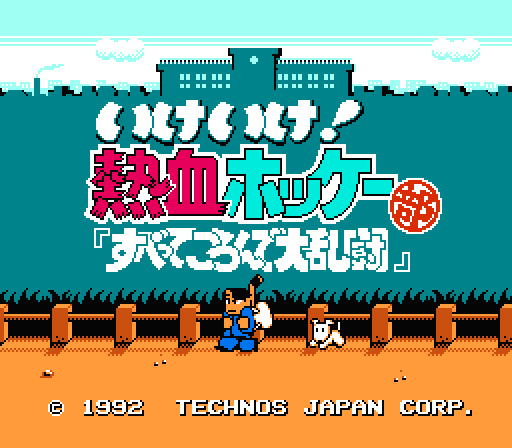 Now, I will admit I don't know that much about Japanese culture. While I'm sure there probably a vocal and fanatic contingent that loves hockey, this isn't the first sport I would have expected to get an adaptation in the Kunio-kun series. Hell, it's not even the fourth sport I'd expect to see (considering the three we already got). Baseball is the game I associate with Japan, having heard plenty about how the citizens there love that sport. The old knuckle ball, though, is missing from Nintendo consoles in the series as we get another game that pushes the same basic engine that the sports games have been using since the first dodge ball adventure.

I get why Technos made this game the way they did. They already had the sports engine which they used to power both the dodge ball and soccer games (the track and field game looks like it was made on the brawling game engine from River City Ransom). If they could get another sports title out to please their fans and make a few extra yen, who's to say otherwise. And, if this game pushed the bounds of the series in any big way, I'd be happy to report that. Sadly, this hockey adventure feels like little more than a re-skin of Nintendo World Cup, just with a few cosmetic changes. If you've played the soccer game of the series, though, you've basically seen everything that Nekketsu Hockey Club has to offer.

At it's core this is another team versus team game where the players face off on a horizontal field. The two teams race back and forth for control of the puck (instead of a ball this time around), battling each other so they can try to get the puck into the net at the end of the field (past the goalie, of course). Score points and the field resets so play can start all over again. It's simple and effective, like any NES hockey game is going to play, and works about as you'd expect for an NES hockey title.

Although it's clearly built on the soccer game's engine, Nekketsu Hockey Club does have some mild changes to the formula that you'd expect from this being a (slightly) different sport. Theres no out of bounds area now, of course, as the puck will just bounce off the walls of the arena and even slide around behind the net. This means there's even less chance for penalties to happen, although that isn't impossible. I did end up getting one of my players ejected into the Penalty Trash Can for violence, although I wasn't certain exactly how I managed to do it (and wasn't able to reproduce the effect). 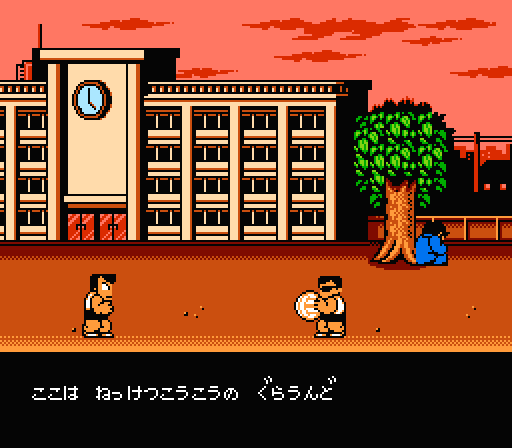 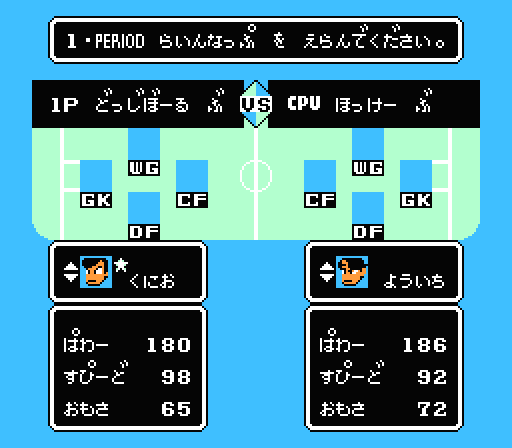 Having penalties happen at all, especially for being to rough, is weird in this game (and lord only knows if that's actually what happened as, like I said, I couldn't reproduce it, I just knew the ref was really mad at me). The Kunio-kun games are all about violence, fighting and smashing into each other. All the players on the ice have health, and you're absolutely encouraged by the game to battle each other, high sticking and slamming into one another to take control of the puck. You should be trying to kill the other team so getting penalized for it is an odd fit in this cartoonishly violent game.

Outside of these little differences there's honestly very little you've find here that you didn't already see over in Nintendo World Cup. As far as basic movement is concerned, this game plays at roughly the same pace, with roughly the same controls and actions. You pass, you hit, and you try to charge up your attacks so you can blast the puck into the opposing goal. Players get stunned when you attack them enough, and with a well aimed shot you can even take out the goalie. All of this is the same as in Nintendo World Cup.

As far as construction goes, the game follows the same formula as the Nintendo World Cup. You take your one team and battle against a bunch of other teams to work your way through the championship. It will take you roughly two-and-a-half hours to play off against all the teams (again, just like the Nintendo World Cup), making this one o the longer Kunio-kun games, although it certainly would have given kids back in the day their money's worth.

What really holds this game back is just how obvious it is about reusing all the engineering of Nintendo World Cup. yes, the sprites are different (hockey players instead of soccer players), but otherwise the game feels like a copy-paste affair. If you played these two titles back to back you could even fool yourself into thinking you had played the same game; the carbon-copy effect between Nekketsu Hockey Club and Nintendo World Cup is simply that strong. 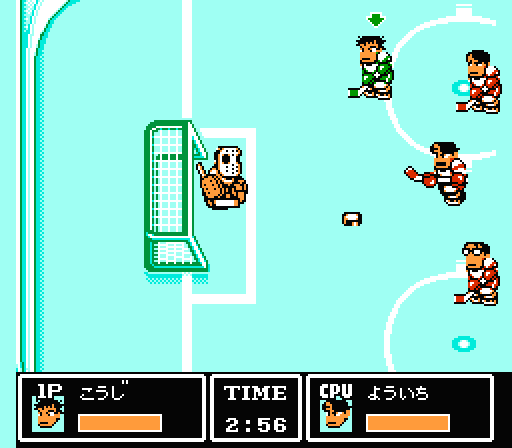 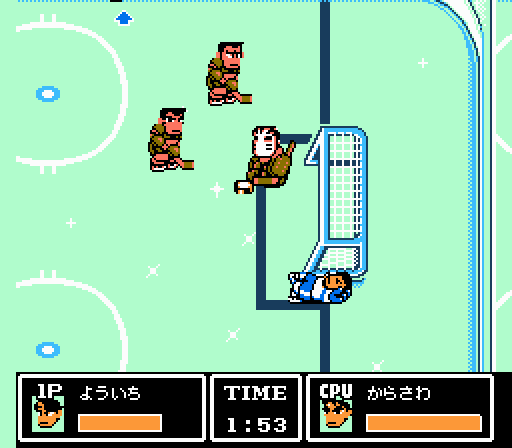 My best guess is that Technos made this title not so much for the Japanese home market, where it was released first, but the U.S. where it was supposed to get a release. The original intent from the company was to put the game out as Crash 'n the Boys: Ice Challenge (as a sequel to the Crash 'n the Boys: Street Challenge that came out in the Japan later, in fact). That plan, though, was scrapped, maybe due to low sales of this hockey title in Japan. While hockey isn't exactly a huge sport in the U.S. it is more interesting to our fans than, say, soccer. Perhaps Technos expected to be able to court a different audience with, effectively, the same game.

Whatever happened, this game effectively crashed (and the boys), remaining a weird off-shoot that never saw any real follow up from the company. More dodge ball, and other sports, games came along, but Go-Go! Nekketsu Hockey Club Slip-and-Slide Madness remained a low-effort release that faded away just as quickly as it arrived. Frankly, that was for the best.