Stuck in the Mud

It's Kunio's Dodgeball, Assemble Everyone!

I've given a fair bit of flak to Technos in my reviews of the Kunio-kunStarting as a fighting game befoe spinning out in sports titles (and other adventures) of all shapes and sizes, the Kunio-kun series is one of the most diverse, and hilarious, to ever grace both sides of the Pacific. NES games because, by and large, they trotted out the same engine over and over again to crank out a bunch of bin-filling sports titles. Super Dodge Ball, Nintendo World Cup, Go Go! Nekketsu Hockey Club... they all started to bleed together as they essentially played the same, built on the same core engine over and over again. Technos needed to find something fresh and new to do with Kunio and his friends if they wanted to keep the series lively. 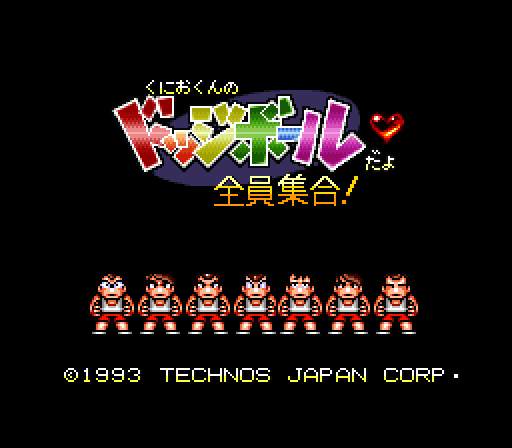 I feel like I owe Technos a very small apology, not because I was wrong -- all their old NES games did start to bleed together -- but because when the company tried to move to the SNES they manages to bungle it at each turn. While I didn't think The Original Nekketsu: Tough Guy Kunio was a terrible game, it was slow and plodding, lacking the magic of the great River City Ransom. However in comparison to It's Kunio's Dodgeball, Assemble Everyone!, Tough Guy Kunio looks positively grand. Technos really dropped the (dodge)ball with their second Kunio-kun SNES title.

On its face, It's Kunio's Dodgeball, Assemble Everyone! (Kunio-kun no Dodgeball da yo Zen'in Shugo in Japan, although Kunio-kun fans tend to just call it "SFC Dodgeball")​ seems like a reasonable release for the Super Famicom. It's dodgeball, a game that already found success for the series in Arcades and on the Famicom/NES. Remaking it and moving it to the SFC should work and would boost sales. The whole Kunio-kun series was built on fighting games (which the SFC had just gotten one) and sports title. You had to have your two pillars.

And, in fairness to Technos, they did pack a lot into this game. Like with most of their late-era NES sports titles, this game has everything you'd expect. I had not just a basic one- and two-player versus mode but a full tournament mode seeing Kunio and his high school buddies battling teams from around the world all to get a chance to take on the special teams and become the all-time greatest dodgeball players. The team members play in matches, gain experience level up, and become stronger as the league plays on.

Along with that, the mechanics of the game evolved as well. The courses are more varied now, with new terrain (like muddy courses, or a machine tower area) included as well. These should affect how the game is played over the course of a match. Added to that are a variety of new ways to pelt the ball at the other team, with more fun throws and power attacks to vary everything even further. On paper, all of these new ideas and mechanics should make for a deeper, richer experience. 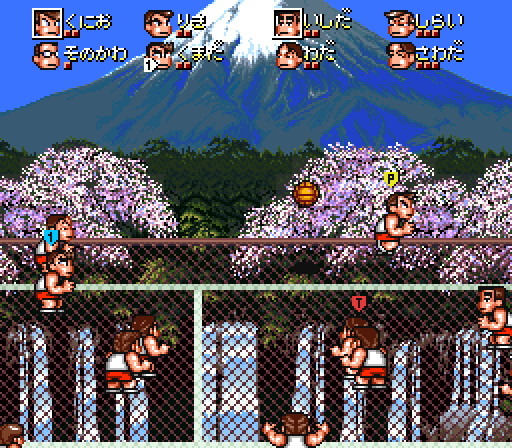 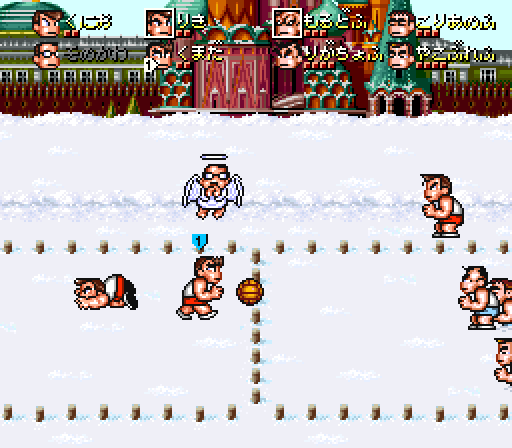 In practice, though, it doesn't. The biggest and most glaring flaw with It's Kunio's Dodgeball is apparent right from the start: it's so slow. The original NES games has a litheness to them. They were quick and zippy with play that felt like it cruised (which helped to keep the energy up). That sense of pace is lost in this SFC dodgeball title, though. Even when characters aren't standing in mud they feel like they're walking through it as the pace is cut way down. It's just a slow, boggy adventure.

I legitimately think this is in large part because Technos simply wasn't ready to work on the SFC/SNES hardware. I had the same complaints about the previous SFC release, Tough Guy Kunio, because that game was a big slog as well. Either Technos wasn't able to get the hardware to kick out faster game play, or they felt like this was the new pace they wanted their games to play at, but whatever the case was, it just feels so slow.

Slow and plodding game play is a big issue in a sports game, especially one like dodgeball. You only really have two screens of real estate to look at, with a mass of characters on each side. You need the game play to really hustle, to whip back and forth across the screen so it actually feels like the game is moving. The long it takes for characters to move, for actions to happen, the less interesting the game becomes. A sports title lives or dies on its fast energy and It's Kunio's Dodgeball dies a death of a thousand cuts due to its (lack of) speed.

At the same time, though, it just doesn't feel like Technos put that much effort into this. I know, from research, that the FC/NES and SFC/SNES has shared hardware between generations (the SFC was basically a "Famicom and a half" in effect). I'd be willing to bet that Technos tried to port their engine over and make tweaks to it as best as they could, living with whatever they had so they could get the game out the door. This is obvious in all of the presentation, from the sprites (which look like the same NES sprites just with more colors) to the menus, layout, and everything else. This looks one-to-one with most of the sports games from the NES, just with 16 bit colors and better sound added on top. It feels lazy, as well as slow. 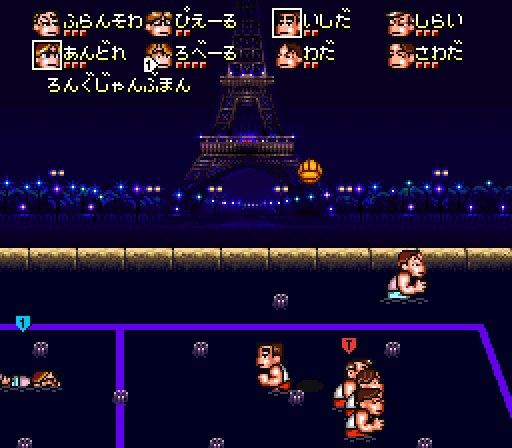 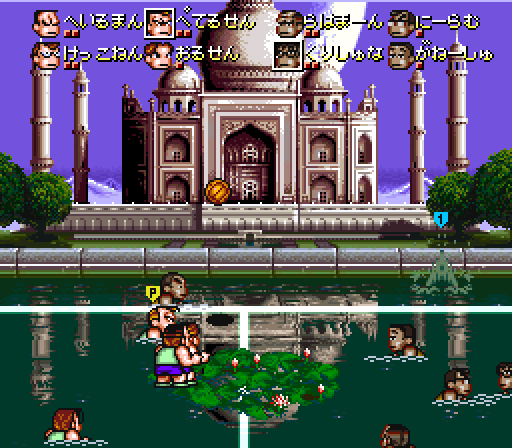 I'm not going to begrudge a company for trying to get a game out in a cost-effective manner. Whether they tried (and, let's face it, failed) to port their old engine over or they just rebuilt it on the SFC as quickly as they could, it still leaves It's Kunio's Dodgeball feeling like a slapdash effort. This was the first big sports title in the series for the Super &amicom, and it was dodgeball to boot, the first sports game ever put out in the series. Technos should have made this feel like a celebration, a new round of games for a new era of 16-bit gaming. Instead, it falls very, very flat.

It's pretty obvious why this game never made it to Western shores: it's bad, through and through. I like the ideas Technos added in to try and give the package more depth, but the company really need to focus more on the core game play, to make that sing, before they started adding on all the bells and whistles. What we have here is a bad game that can't elevate the few great ideas thrown into the mix. I'd say we should have expected better from Technos, but frankly the last few games they'd put out hadn't been very good. Instead we're just watching the slow, steady decline of a once-great series.