Smash Into the Sand

We've been on quite the journey with the Kunio-kunStarting as a fighting game befoe spinning out in sports titles (and other adventures) of all shapes and sizes, the Kunio-kun series is one of the most diverse, and hilarious, to ever grace both sides of the Pacific. series. The little franchise went from a single beat-em-up (that defined the genre), through many, many sports titles, and the transition of the series to the SNES. By and large the series managed to keep its identity, even if the latter games never quite rose to the success of the franchise's early titles. 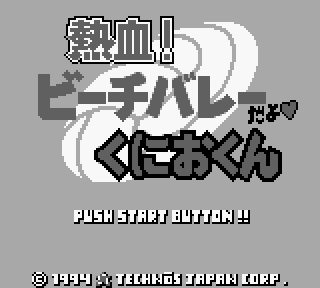 Now, however, we're at the end of the line, at least for Technos. While the Kunio-Kun/River City series will live on from this point with other companies, Hot-Blooded! It's Kunio's Beach Volleyball (original Japanese title Nekketsu! Beach Volley dayo: Kunio-kun) is the last official Kunio game that Technos ever made. The company would live on for two more years before officially going bankrupt in 1996. Their Kunio properties would change hands, going over to Million Co. Ltd., a holding company specifically setup to manage them, and that would be that for Technos.

That put extra weight on It's Kunio's Beach Volleyball, even if that isn't really fair. This is the last Technos game in the series, making this their (unplanned) big conclusion and, in that regard the game really doesn't hold up. Technos didn't expect this to be their last game in the series (reportedly they at least had a bike racing game for the Kunio crew in the works that never was finished), and you would have liked to see their series go out with a fighting game, to bring everything full circle. Instead we have a volleyball title for the Game Boy as the last gasp of the original franchise.

As far as volleyball games go, It's Kunio's Beach Volleyball is perfectly playable. It follows he standard template set down by all the Kunio Kun sports games. Someone comes up the Kunio one day and say, "yo, there's a volleyball tournament going on. You should play in it bruh to prove you're the best." Kunio is all, "bruh, I am the best." Then they all say "bruh" again before Kunio grabs his best bro/sometimes rival, Riki, and they head off to play some volleyball. You know, as you do.

If you'd played Techno's previous volleyball title, Super Spike V'Ball ,then you get the basics of this game. It's two-on-two volleyball played across a series of courts -- sand, grass, wood, etc. -- with the usual assortment of trick shots and dirty plays each side can make. It doesn't exactly break the mold in any big way, ,but it does provide a solid volleyball experience for the Game Boy. 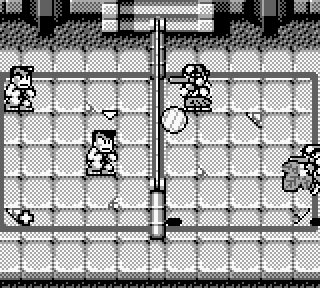 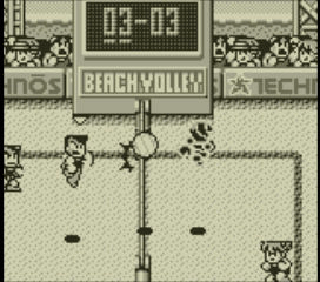 Let's be clear, Technos had cranked out so many sports titles in the franchise that they could make something like this in their sleep. it wouldn't surprise me if this game originally started life as a Super Spike V'Ball port (itself a port of the arcade U.S. Championship V'Ball) before the technos crew expanded it ever so slightly. That was a perfectly playable game and the same solid game design extends here, even if it was five years older at this point.

The game does add some fun Kunio-kun flair. For starters, you have the usual trick shots in the like. Although a lot of players get the power spike move (borrowed straight from Super Spike), there's also a fun "leaf volley" that stops the ball dead in the air and turns it into a falling leaf, screwing with where players will expect the ball to land. And each set of characters has their own fun way of playing the game, from a team that only plays with their feet, to a pair that use umbrellas (and their own butt0 to volley back and forth. It's the little touches of creativity, like this, that make the game feel like slightly more than a bog-standard sports game.

Naturally, the game follows the usual Technos sports progression. You start off against an easy team to get the feel for the play, then work your way up through progressively more difficult battles. Win enough matches and you get to move on to the championship to face the hardest team. Win that and you win the game, getting the little cut-scenes of Kunio and his friends talking smack and taking names. Nothing here will surprise anyone that's played through the whole series, but it does at least provide the experience some fans were likely still wanting.

Again, all things considered this is a totally expected, but totally playable, Technos sports game in the vein of all the other Technos sports games. It wasn't going to set the world on fire (and certainly didn't) but anyone that got a chance to play it likely enjoyed it for all the same reasons as any other sports game in the series. technos was pretty good at these games, formulaic as they were, and could crank out playable titles on the monthly when they had the resources to do so. 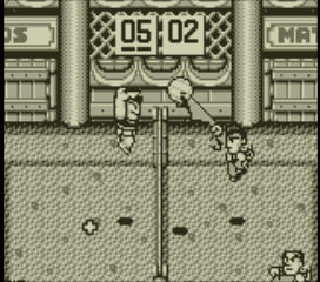 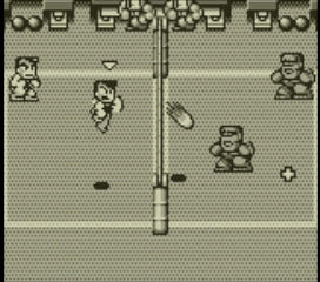 With all that being said, it was pretty clear even before Hot-Blooded! It's Kunio's Beach Volleyball came out that the writing was on the wall for Technos. Their mainline titles had been getting worse and worse, and while most of the sports games (a terrible Downtown Hot-Blooded Baseball Story notwithstanding) were all playable, they didn't really move the series forward even a single inch. Fans had their fill of the games many iterations early and the law of diminishing returns set in for Technos. They couldn't innovate hard enough to keep fans interested and, by 1996, went belly up.

That said, at least the series itself lived on. We'll have plenty more games to cover in the series, from the time under Millon, through Miracle Kids, and then Arc System Works. But for anyone that loved the first few Technos games, this has to feel like a bittersweet end of an era. Poor one out for the company has they go out not with a bang but a sandy whimper.