Now firmly ensconced in the loving embrace of the Super Famicom, Techno's Kunio-kunStarting as a fighting game befoe spinning out in sports titles (and other adventures) of all shapes and sizes, the Kunio-kun series is one of the most diverse, and hilarious, to ever grace both sides of the Pacific. series was set to push game after game on Nintendo's sequel console. And this new era for the series gave us... yet another sports title. It is, however, a title that we frankly should have seen a whole lot sooner: Baseball. I'm not deep into Japanese culture, mind you, but even I know full well that baseball is effectively Japan's most popular sport (in much the same way the gridiron is America's most popular sport, even if baseball is our past time). The fact that it's taken us 15 mainline games before we finally got a baseball sim is pretty stunning, honestly. 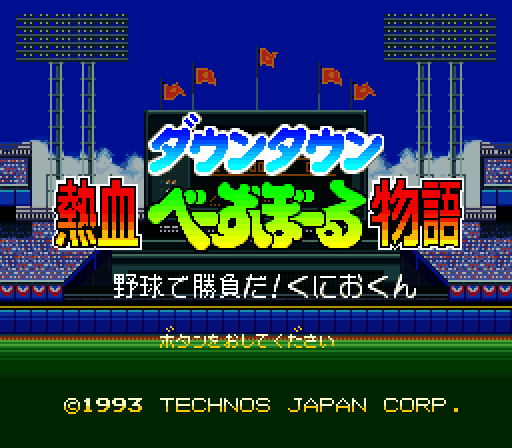 Considering the caliber of sports titles that we've seen in the Kunio-kun series, you might be wondering how baseball could be applied to the normal conventions of the franchise. All of the games in the series have blended fighting mechanics and side-scrolling action into whatever sport of event has been covered, all of which would seem to be a far cry from the standards of baseball. On that count you'd be right, and it's a set of mechanics that just don't work in the vein of baseball, so Technos ditches all the classic Kunio mechanics. Instead, for Downtown Hot-Blooded Baseball Story: It's a Baseball Match! Kunio-kun (original title Downtown Nekketsu Baseball Monogatari: Yakyu de Shobu da! Kunio-kun in Japan) we get a pretty traditional baseball sim.

In the game you take on one of a number of teams to battle against other teams for baseball dominance (just as you'd expect from any of these Kunio-kun sports titles). You do this in a very traditional baseball setup: nine innings, each team taking a turn at batting and then fielding, with the goal of scoring more points than your opponent before all the innings are done. And then you baseball, as baseball is meant to be baseball'd.

What's most striking (no pun intended) about this game is just how traditional it actually is. Where other Kunio games have gone out of their way to mix in brawling mechanics to spice up a bog-standard sports title, Hot-Blooded Baseball doesn't seem to have any of that in the mix. I kept hoping to find some way, as my players were running around the bases, that I could bash into the other team, make them drop balls, or maybe take my bat around with me so I could beat the snot out of other players. None of that was on offer though; the game plays it pretty straight.

Now, I do say "seems" when I discuss the play and mechanics of the game because, frankly, I had no clue what I was doing in the game. I don't read Japanese and this game received neither an official translation from Technos (having never been ported overseas) nor a fan translation that was playable enough for my tastes. This left me flying blind on the various menus, trying to piece together what to do or how to really play this game properly. And if you're saying, "hey, just go hit GameFAQs," or some other similar site, I did try; no one has written anything useful for this game. Flying blind is the only way to go if you can't read Japanese. 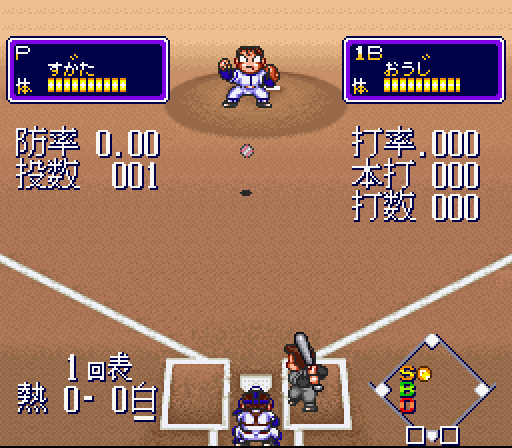 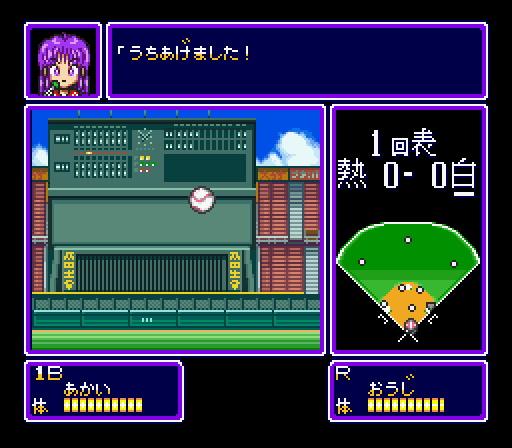 That does seem to indicate to me one big issue with this game: it just isn't well loved. Usually a game will get fan-translations just so the wider audience can play it. I would expect every game in a storied franchise as long running as Kunio-kun would get some kind of translation assistance (or a guide, or something), but for Western audiences this game is a total void. No one wants to play it, speaking to just how much Technos clearly missed the mark here. This is just not a game worth the time of most fans.

That isn't just an observation from the general lack of fan interest Online; you can experience that for yourself playing this game as, man, it is just such a slow and trying experience. Technos clearly set out to make a true baseball sim and they managed that; this game is just as slow and boring as watching (or playing) actual baseball. Anything close to the flash and flair you'd expect from a Kunio title is missing as this game plays it straight. Really, really straight. Annoyingly so.

On the pitching side, you can control what kind of pitch you throw and where it aims. Sometimes this has an impact, as you can bait the computer for hitting at pitches that are nowhere near their bat. However, sometimes they can catch a piece of a throw that seems like it's outside their reach, sending the bat flying up in the air. Fly balls are actually the worst hits a team can get as the computer will have players on the field home in on balls, letting the out-fielder comfortably grab the balls leading to outs. I barely had to try at all when I was on outfield as the little player-to-ball map in the lower corner of the screen was easy to use and simple to execute. Sure, occasionally one of my players would miss the ball like a big, dumb dink, but that RNG could also affect the CPU, so it was a wash in the end.

Hitting is another matter altogether. What you want is to aim for ground balls as the players on the field are much slower getting a hold of rolling balls, letting you have a chance to get to base before they can pick you off. Mind you, this is easier said than done; I had a hard time not hitting pop flies that were easily grabbed, but the CPU had no issue nailing nice rolling hits over and over again. Scoring against the computer was hard but they had no trouble nailing me over and over again. 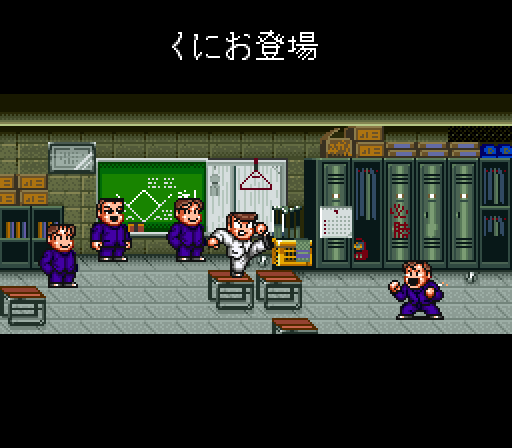 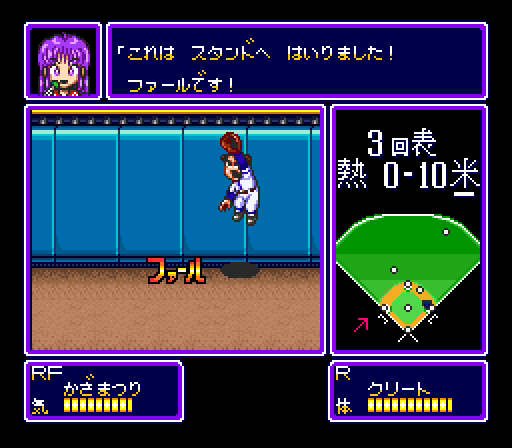 This illustrates something I never expected to see in a Technos sports game: a CPU that actually plays unfairly. Normally the CPUs are good the games being played but the human players have ways to balance that out. Namely, they could attack and cheat, playing unfairly so as to balance out the CPU's natural gifts. Here, without all the things that make a Kunio-kun game into a Kunio-kun game, I struggled to keep up. I had to play a realistic game of baseball and, let's be clear, I am not good at realistic sports sims. I don't play Kunio-kun games for realism; I play them so I can bash in the heads of my foes and score easy dunks. (You dunk in baseball, right?)

If I had to guess, Technos made a traditional baseball game because they thought that was what the Japanese market would want. It seems like they missed the mark, though, as this game didn't get much love at the time of release, nor any time after. Hell, when you look at all the games that came out in this series, as well as all the spin-off franchises that came out after, this is the only baseball title in the whole set. Other sports were revisited again and again but Technos took their shot at baseball and then packed it in.

Now, if I'm being kind I will note this does seem like a pretty decent little traditional game of baseball. But there were plenty of traditional games of baseball on the SNES (Super Baseball Simulator 1.000 and Super Bases Loaded both came out three years earlier and are considered the peak of SNES baseball sims) so by 1993 the SNES didn't need yet another standard baseball sim. This game does its job and it does it competently enough, but by the end of 1993 (this game came out in December of that year) competent just wasn't enough.

Had Hot-Blooded Baseball found a way to really mix in the best elements of the Kunio-kun series with the mechanics of baseball it could have been something special. I could see a more side-scrolling style game, one that feels more like a rough-and-tumble game of stick ball, all with the fighting and brawling you expect from Kunio and his gang. That could have been some real, bloody magic right there. That is not this game. Hot-Blooded Baseball is fine, but this deep into both the life of the Kunio-kun series and the Super Famicom, fine just wasn't going to cut it anymore.