Osaka Will Never Be the Same

The original NES did not lack for solid brawling games. Although the console came out before the advent of the grand Street Fighter series, there were a fair number of good beat-em-ups to choose from back on that old grey box. Many of those games, it should be noted, came from Technos, the company that produced both the Kunio-kunStarting as a fighting game befoe spinning out in sports titles (and other adventures) of all shapes and sizes, the Kunio-kun series is one of the most diverse, and hilarious, to ever grace both sides of the Pacific. series and it's spiritual sequels, Double Dragon. There was a long period there where Technos were the undisputed rules of the beat-em-up market. 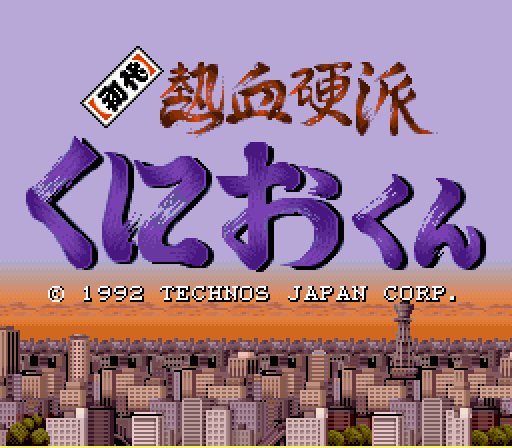 While Double Dragon and Double Dragon II: The Revenge have their fans, and are very good games, my vote for the best NES fighting game will always be River City Ransom. That game was an unappreciated (at the time) classic that seemed like it was lost among all the Double Dragon hype. Of course, what I didn't realize was that not only was that not the first game in its respective fighting franchise (coming out after Renegade) but that it had a ton of fighting sequels we never got to experience in the West.

There was the direct River City Ransom sequel, Kunio-kun's Historical Period Drama!, but then the series moved over to the SNES and continued giving Kunio adventures where he could kick the snot out of other school boys. In 1992 Technos came out with the next sequel in their fighting series, The Original Hot-Blooded Tough Guy Kunio (or, as it was called in Japan, Shodai Nekketsu Koha Kunio-kun), and it wasn't really like either Renegade or River City Ransom either. Instead it feels like it has more in common with the NES edition of Double Dragon than any of the other games in its series.

In the game Kunio and his school buddies head off to Osaka for a fun school trip. Almost immediately, though, they're jumped by local school ruffians who want nothing more than to beat them down. Why? Because apparently one of the local schools has very similar uniforms and, via a case of mistaken identity, now the boys from Nekketsu High are stuck in the middle of a school-based gang war. And, of course, only one guy can defend the kids of Nekketsu from these jerks and thugs: Kunio-kun.

As it turns out, all the jerks causing problems are from the Union, a group of five schools that aligned together to rule over Osaka. Led by a group of five high school leaders, these schools are taking out the students from every rival school and gang to solidify their power. But with Kunio on the scene, he's going to help the underground movement, the Alliance, to stop the Union and save all the students of Osaka. It's a battle, a free for all, that will play out on the streets of the city, and Kunio's fists will do the real heroics. 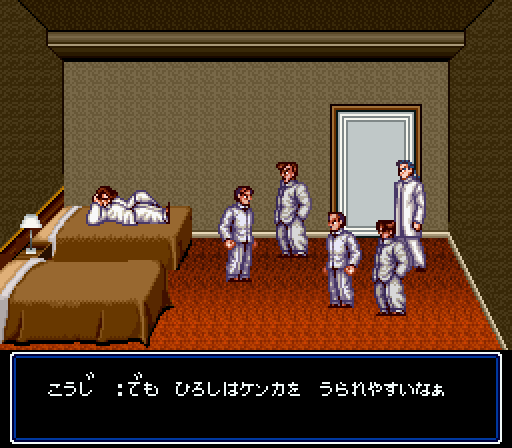 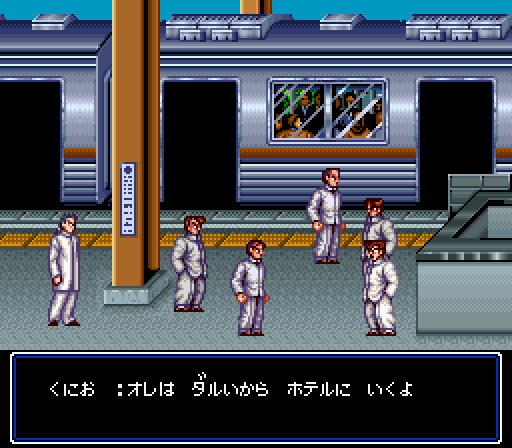 At it's most basic, Hot-Blooded Tough Guy Kunio seems like any other fighting game in the series. You go from one end of a side-scrolling zone to the other, punching and kicking dudes until they fall over and "faint" from the severe beating you gave them. But where Renegade had a linear progression to its advancement (clearing one screen after the next), and River City Ransom added in shop mechanics and money, Hot Blooded Kunio turns itself into a low-grade RPG.

As Kunio fights guys he'll gain experience, not money, from the battles. As he grows he'll level up, gaining not only stats but also, occasionally, new moves to perform. He starts off just being able to punch and kick, but by the end of the game you can do jump kicks, throws, pin-down moves, and all kinds of other attacks to take out your foes left and right. While I never felt like I had as much acrobatic freedom as I could get in River City, the mechanics did make it feel like I was growing this character to be a bad ass warrior.

That being said, the fighting mechanics themselves probably could have used some solid tweaking before the game was released. One issue is the health bars of the enemies; as the enemies get tougher they'll get more health. The game only has so much room to display health bars, though, so very quickly in the game you'll start encountering enemies with more health than the game can display. You'll wail on them for a while (sometimes minutes in the case of bosses) and while you'll controlling the fight you never see their health bar tick down. The game either needed to scale the health bar based an an enemies relative level, or it needed to do like other games of the era (and after) did and use multi-colored health bars that pull down, one after another, to show all of a foe's vitality.

Meanwhile, the actual fighting itself feels so basic. Yes there's a lot you can make Kunio do, but often your best recourse was simply button mashing. Too often I could control a pack of enemies by jump kicking them all down at once and then standing over them, punching the air (and them as they stood) until the just died. There weren't many instances where I felt the battles were hard, just long and tedious. More often than not I just wanted things to end quickly so I could advance the story. 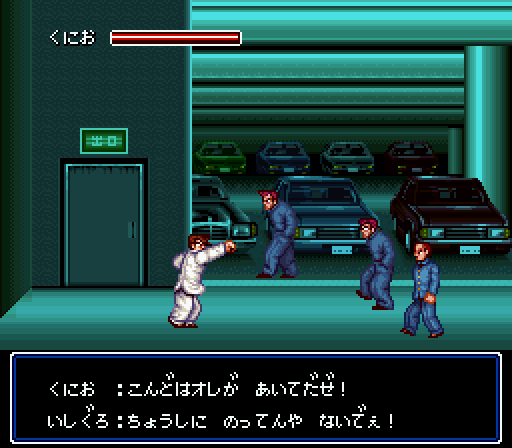 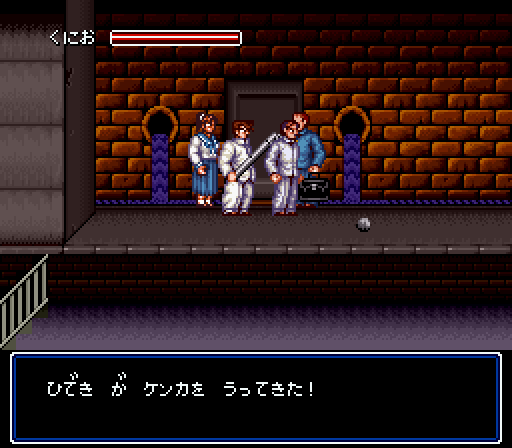 Unfortunately you'll have to go through a lot of fights in the game because Hot-Blooded Kunio featured random fights that just occur. You'll be walking down the street, doing your thing, and an internal timer in the game will go off saying, "they haven't fought anyone in a bit". Then random passers by will pick a fight, and you're locked into the battle until it's over. There's no running, just beating them until they die so you can make progress again. I got really bored of all the forced fights really quickly.

Meanwhile, the actual story of the game isn't anything special. You'll walk back and forth along the five major zones of the game, which all look alike, waiting for the game to tell you where to go next. It isn't always clear where to go, though, so you'll often just wander aimlessly, taking fights because the game won't let you do otherwise, until you stumble into the one section that will advance the plot. It's all really dumb, and boring, and clocking in at four hours for a casual play of the game, the title could have easily cut out half its content without really missing anything.

At it's core I feel like there's a game that could be interesting in The Original Hot-Blooded Tough Guy Kunio, that game just didn't come out in the final product. Although there are bits that do work about the game -- the RPG mechanics are novel, the graphics are nice, and the sound design is decent -- those don't outweigh all the things the game does wrong. I think more time in the hopper, playing this to make it tight and fun could have made for a fun game. As Kunio's fourth official fighting entry, though, this Hot-Blooded entry just isn't cool at all.