When you think of the Kunio-kunStarting as a fighting game befoe spinning out in sports titles (and other adventures) of all shapes and sizes, the Kunio-kun series is one of the most diverse, and hilarious, to ever grace both sides of the Pacific. series you thinking of fighting. The series started with a brawler title, then expanded with sports games (that featured fighting) more fighting games, more fighting sports games, and then more different fighting games. Fighting is the raison d'etre of the Kunio franchise; if a game doesn't have fighting in it then it really doesn't feel like it belongs in the series. We already saw this once with Downtown Hot-Blooded Baseball Story, a baseball sim with no actual fighting in it, and now we have it again with, of all things, a puzzle game. 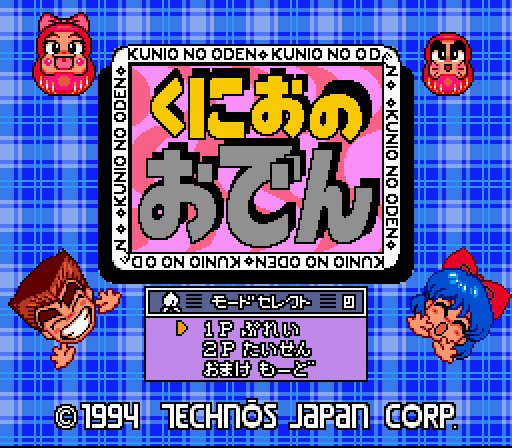 Don't get me wrong, I think the characters from Kunio-kun can certainly appear in just about any style of game possible. If Technos wanted to make a puzzle game and have cameos from their various characters in there, that would be fine. Mascot games are part of the video game landscape, too be sure. But the Kunio name implies a specific style of play and if you were expecting any kind of fighting to be included in your puzzle game then Oden of Kunio (or Kunio no Oden in its literal translation) is not the game for you. It plays things just a little too straight.

The game is a pretty standard matching game. Kunio wants soup (specifically oden, a variety of hot pot-style igredients is a light miso, a style of dish I had to look up just so I knew what an "oden" was), so he plays a matching game to figure out what igreidents will go in the soup. Or someething. Let's be honest, the Kunio-kun games have never really been known for their plot. Regardless, to populate his soup, Kunio has to play one of two styles of matching games; his ingredients drop into a well, he matches them, the ingredients are collected. Rinse and repeat.

Depending on the style of play you like, Oden of Kunio offer two versions to choose from. You can play in a Columns-style game, where your pieces fall into the well and you have to match them in straight lines, or you can play in a Puyo Puyo mode where you can match four pieces in any combo so long as they touch. For me, Puyo is my favored game play style (I absolutely destroyed back in the day on Kirby's Avalanche) so that's what I gravitated to with this game.

Along with play styles were are also the usual assortment of modes. You can play on three different difficulty levels, go through a practice mode, or jump into story mode. Story mode is exactly what you'd expect, with Kunio battling other soup makers in one on your battle, each of them sending filler bricks (chopsticks in this case) over to the other player's well when they make great combos. Fill the other player's side and you win the match, moving on to the next foe along the line. It's no frills, but it works. 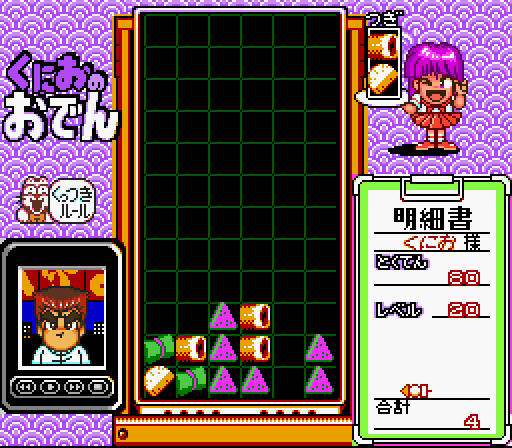 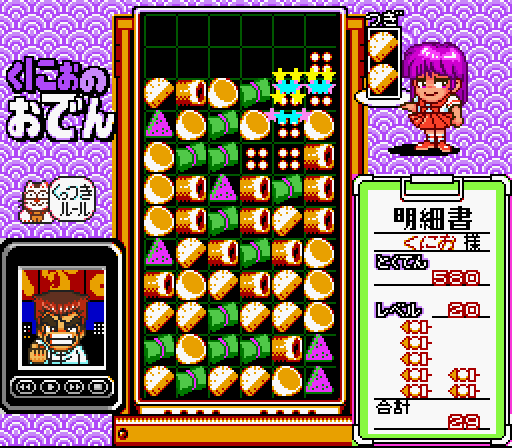 "No frills" is a geat way to describe this game. It has just enough in it to give you exactly what you expect and not any more at all. The story mode only has six battles in it before the game is over, which feels like the bare minimum required to even be a basic story mode. When you compare that to other games released around this time in the genre, like my beloved Kirby's Avalanche which had 16 boss battles to get through, a mere six stages in a puzzle game is absolutely paltry. The game needed more.

But then you have to think about how the game could have better worked the Kunio-kun brand into it. Having recently played Wrecking Crew '98, a game that managed to work Super Mario SeriesHe's the world's most famous plumber and the biggest face in Nintendo's stable, a character so ubiquitous you already knew we were talking about Mario even before we said his name. mechanics into an otherwise standard looking puzzler, it's pretty clear there was a way this game could have better implemented Kunio into the proceedings. Games like Wrecking Crew '98, like Yoshi, like Bridge Constructor Portal show there's life in taking a basic puzzle premise and working a brand (with its own mechanics) into the adventure. Oden of Kunio just doesn't have that level of creativity.

It's odd because this was the last game released in the series for the Super Famicom. You'd think Technos would have been more interested in sending the series out of the 16-bit era with something of a bang. You'd expect another fighting game, or even na solid sports title, but instead they put out a low-effort puzzle game that hardly feels like a Kunio-kun title at all. They just grabbed a basic puzzler, slapped on some (admittedly good looking) graphics, and called it a day. It's lazy, really.

Sad, too, because the game, at its core, plays well. Sure, this is nothing new -- it's Columns or Puyo Puyo with a reskin -- but it does play well. There no lag, no slow-down, the game just runs smoothly and functions as you'd like. If you were looking for a game that combined both styles of play in a single package, this could have seemed like a good title to pick up... so long as you didn't mind how short the main adventure was. Of course, therein lies the rub. 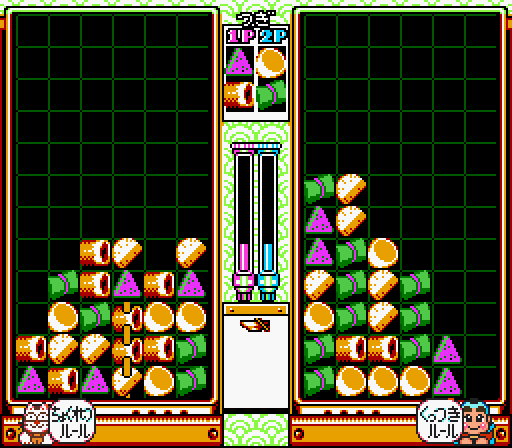 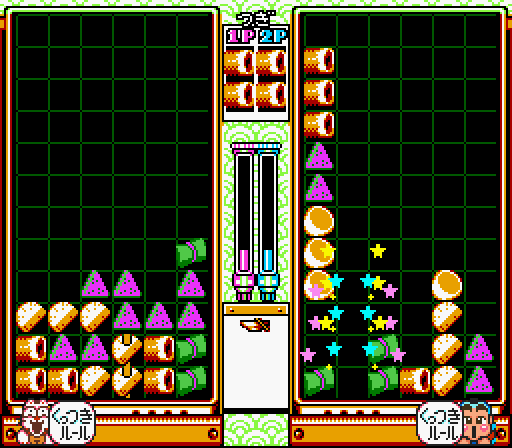 If you were interesting in a puzle game, Oden of Kunio is simply too short and slight to really feel like a worthy addition to your collection. If you were one of the Kunio faithful then this game didn't have anything you were really looking for from the series. And for everyone else that didn't fall into either category the SNES didn't lack for solid puzzle games that had more meat to them. In all respects, then, this just fell short. And thus the Kunio series left the SNES.