We've seen a lot of sports titles in the Kunio-kunStarting as a fighting game befoe spinning out in sports titles (and other adventures) of all shapes and sizes, the Kunio-kun series is one of the most diverse, and hilarious, to ever grace both sides of the Pacific. series (eight so far across five different sport types with plenty more to come), and at this point it's easy to see yet another sports title from the franchise and go, "another one? On Famicom?! Really?" That's a fair reaction, too be sure, especially when most of them feel like tired rehashes of what we've already seen before. But, and hear me out, things are different this time around. Technos decided to tackle basketball (and in the Kunio series, "tackle" is an apt term) and this time they hit on a fair bit of magic. 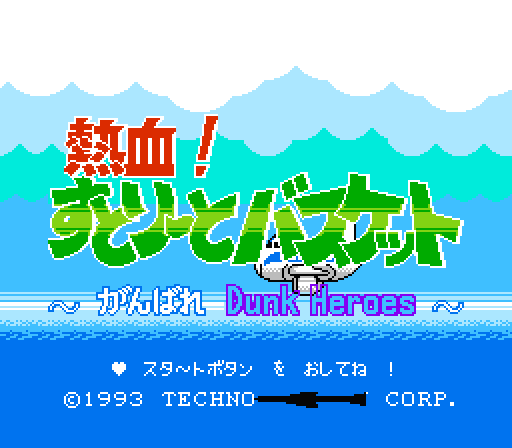 In the past the various sports title all felt very samey. Either they were built on the Super Dodge Ball engine, with a wide field the players ran around on trying to aim a random sports implement into a net, or they were built on the River City Ransom engine, with minor events that all felt like mini fighting games. They were amusing for a time, but not really deep enough to keep players hooked. Diversions at best, and wastes of money at worst.

With Nekketsu! Street Basketball the company managed something special. Sure, it's likely built on the same base engine that powered Crash 'n the Boys: Street Challenge and Nekketsu Fighting Legend, but the twists and tweaks the game implements help this basketball sim rise above the standard Kunio-kun fare. It's actually a refreshing title for the series and a great way to usher out the Famicom era of the franchise.

The game opens about how you'd expect (at least for this series). Kunio is, for some reason, on a game show and manages to win an all expense paid trip to the U.S. His friends stowaway on the plane, coming along for the ride so they can enlist Kunio's help in winning a street basketball tournament. And, with that, the game is off to the races, setting up a tournament mode (alongside the single play mode you'd expect as well). Kunio and his crew face off against a series of teams in two-on-two street basketball all so they can take home the crown (and, presumably, the pot of money that comes with).

If you've played any of the Kunio-kun sports titles then you know the basics of how this works. You have basketball and you're playing for points, but because this is a Kunio-kun game, fighting is as much a part of the adventure as actually playing the sport in question. You can kick and punch (and use special moves) against the other players while trying to get hold of the ball. With the ball in your possession you can lob special throws that will have more power, all in the hopes of taking out players or sinking a lovely shot in the baskets. Do this better than the other team and you win. 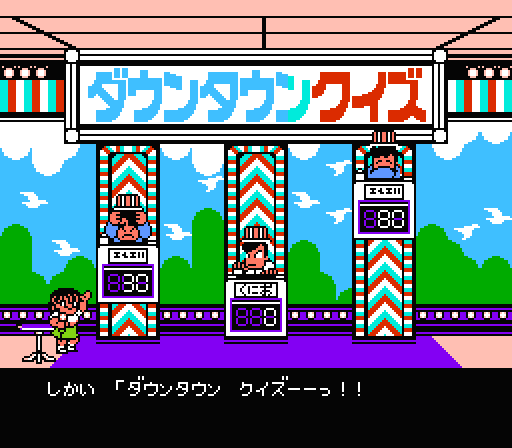 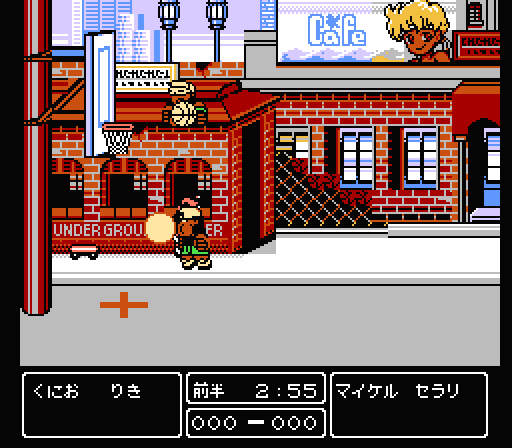 Considering its pedigree, it should be no surprise that the game plays smoothly. The action is fast and furious, with plenty of chaos on the court, but it all moves at a nice, steady clip without any slowdown. This was Technos using their engine as well as it could be done, presenting an optimized, well-programmed sported game just like you'd expect. It has all the hallmarks of their standard presentation, done as well as any of their sports games could be.

Playing the game, I will admit that the chaos on the court was actually pretty frenetic. I'm used to these games ramping up their challenge slowly, ,giving you time to get used to the game before it drops are hard team on you that hardly plays fair. This time around, though, the computer doesn't hold back. You have to play the game, and play it well, to get past the various teams because you're always right on the razor's edge. Give the CPU any time and they'll suddenly rack up 20, 30 points and totally wreck your high score.

How can they do this? Well, that's where the best, and most amazingly stupid, tweak comes in. At each end of the court there's not one, not two, but three baskets all aligned vertically. Give the ball a solid enough lob up in the air and you might just be able to sink it into the top basket. Each basket scored on is worth three points, but the top slot is worth four. And, because they're vertical, sometimes the ball will drop through all three, and each one counts. One good shot could be worth as many as ten points all at once, enough to quickly swing a game in the other direction.

It's a brilliant twist that keeps the game always moving. Other sports games in the franchise you could rack up a ton of points early and then coast, but this time around you have to work for it. You can never rest, never sit on your laurels and just run out the clock. The CPU is always breathing down your neck, looking for a way to line up a solid shot and score as many points as it can. You have to play well, and play furiously, or you won't get a chance to turn the game around. It's amazing. 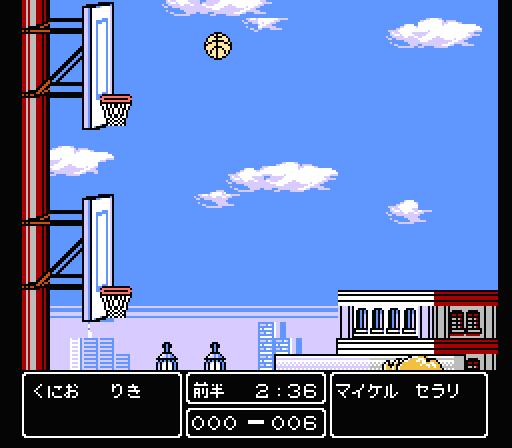 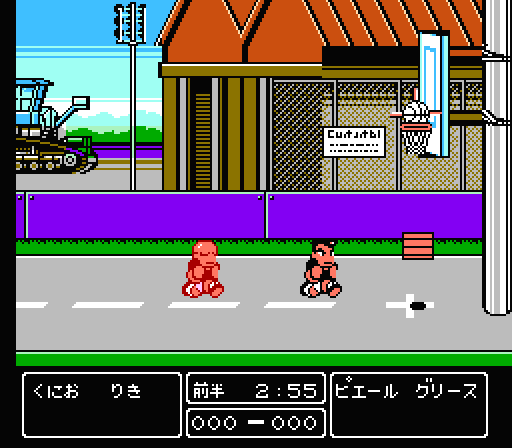 I frankly loved my time playing this game. Yes, it still follows the same formula of other sports titles in the series. Sure, you're in a tournament and you have to face off against all the teams, in order, before you get to the end and win the game. It's a two-our tournament that expects you to just sit down and play it, the whole time. And yet, unlike with other games in this franchise, I never felt bored with this sports title. It was a fast, frenetic adventure that kept me hooked the whole way.

While I do prefer the fighting games in this series to the sports titles, I won't deny these other games have their charms. And when it comes to sports from Kunio-kun, it's hard to go wrong with Nekketsu! Street Basketball All-Out Dunk Heroes. This is really the best of the set. Congrats to Technos for sending the Famicom off with one last bang.