Back to the Court

From here we enter what could be considered a "dark time" for the Kunio-kunStarting as a fighting game befoe spinning out in sports titles (and other adventures) of all shapes and sizes, the Kunio-kun series is one of the most diverse, and hilarious, to ever grace both sides of the Pacific. franchise. Although from 2005 on holding company Million Co. Ltd made (and licensed) games in the franchise, these really weren't proper series extensions. Mechanics, music, and concepts were reused in new titles, but as far as continuing the characters and story of the previous Kunio-kun games, these new titles didn't bother with any of that. In fact, if you didn't know that Million had picked up the rights to the series you would just think these were clones of the more well-known franchise. 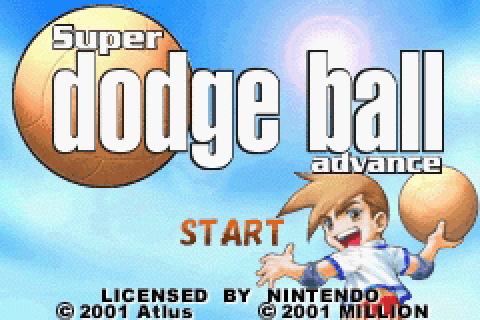 Of course, the other part of that is the fact that, for the next few years, the only thing produced by the holding company were dodge ball games. Now, don't get me wrong, dodge ball is a part of the DNA of the Kunio series. We saw that since the second game of the franchise, Super Dodge Ball. Electing to carry on the franchise with a single dodge ball game would have been fine. But over the course of six games from Million (and then licensor Miracle Kidz) we got six of them. That's a lot of dodge ball without much else.

This first game in the new part of the series, Super Dodge Ball Advance (Bakunetsu Dodge ball Fighters in Japan), seems to want to carry on the tradition of that original title. Acting as a sequel mechanically, the game finds the player taking on the role of captain of Team Heroes. The Heroes are the 10th ranked team in the dodge ball league (you knew there was a dodge ball league, right), and their goal is to get to the Number One spot. They do this by playing dodge ball against the nine teams higher than themselves until they manage to rack up enough points to be the kings.

Now you can't just play one game of dodge ball and suddenly become the next rank higher. No, you have to earn points (that you don't really see but are totaled up in the background) until suddenly you leap above the next team up and take their spot. Thus you'll end up playing the same teams over and over and burning through an absolute ton of dodge ball matches. Get ready for a grind as you try to become the number one dodge ball team in the world.

As far as taking the mechanics from the Kunio-kun dodge ball games and moving them over here, Super Dodge Ball Advance does an okay job of it. Mechanically this game plays it much closer to the original NES and Arcade release than the sequel, It's Kunio's Dodgeball This game is a much more basic affair, lacking any of the team training menus or special items you could use in later Kunio sports games. 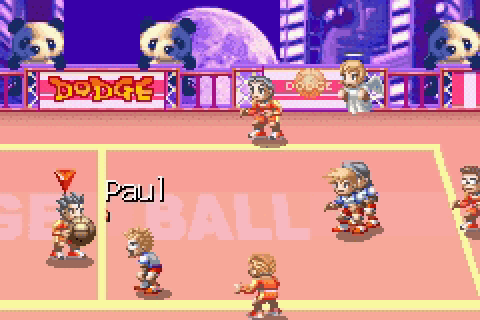 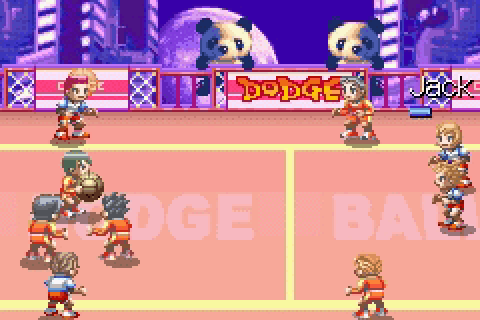 What that leaves, then, is a competent if not spectacular dodge ball experience. This game hews very closely to the original arcade title when it comes to mechanics and basic play. Seven players gather on the court but you only need to defeat four of them (the ones in the active play zone). You can throw the ball, catch the ball, and charge up the ball to destroy the other team with a special throw. Defeat all the other players and you win the match. And then you get to do it again, and again, and again.

That's one major issue with this title: it's very repetitive. While you do have the option to play any of the other teams from around the world, this isn't circuit play. You don't just play each of them once but the same teams over and over until you finally rank up. The matches themselves only last a couple of minutes, but you have to do them a lot. Aside from some changes of scenery and colors of the sprites, the teams really don't have many differences between them. It's the kind of game where once you've played a single match you've effectively seen everything the game has to offer.

A big knock against it, though, is that it doesn't feature any of the actual Kunio-kun characters. There's a Japanese team in the game but they aren't from Nekketsu High, and none of the characters resemble anyone familiar at all. That's so weird considering the mechanics of this game are basically taken, one-for-one, from the arcade original. The original characters weren't toxic to the fan-base at this point, and considering it had been ten years since the last game in the series had come out (1994's It's Kunio's Beach Volleyball), there's little reason to not have this be a proper Kunio game.

I think actually committing and making this a proper game in t he series would have helped it some. Having graphics more in line with the original series would have given this title more flavor, for sure. The graphics we get are fine, if bland, but the original Kunio style from the NES, spiced up with a strong color palette, really could have been fun to see. Better than these bland, basic graphics for sure. The music and sounds are there from the original series but this sure doesn't look good enough to carry the weight of the legacy. 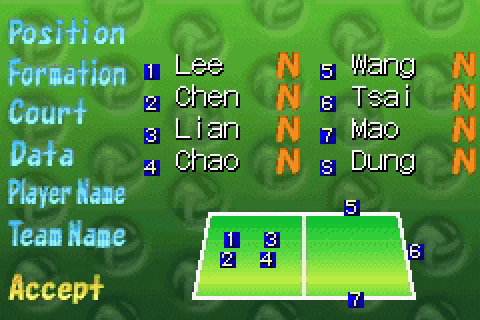 Considering they had ten years to sit on the license and do something with the material it's surprising that Million wasted that good will on such a bland and basic dodge ball game. Again, in concept a dodge ball game to revive the franchise really could have worked, but this game wasn't that title. We'll get to more of these games as we continue through the franchise but, to put it mildly, this is an inauspicious start.