Fighting Side by Side

The New Hot-Blooded Tough Guy: The Elegy of Kunio and Co.

I think by this point we need admit something: Kunio-kunStarting as a fighting game befoe spinning out in sports titles (and other adventures) of all shapes and sizes, the Kunio-kun series is one of the most diverse, and hilarious, to ever grace both sides of the Pacific. series is a bit of a mess. It's not like the games started off being all that cohesive, what with the original brawling game Renegade getting followed by, of all things, Super Dodge Ball, but over the years the brawling side of the series has struggled to maintain a cohesive style and voice. Every couple of years will see a new fighting game, this time with a different style, contradicting anything the players had gotten used to before. And it continues with the SNES iterations. 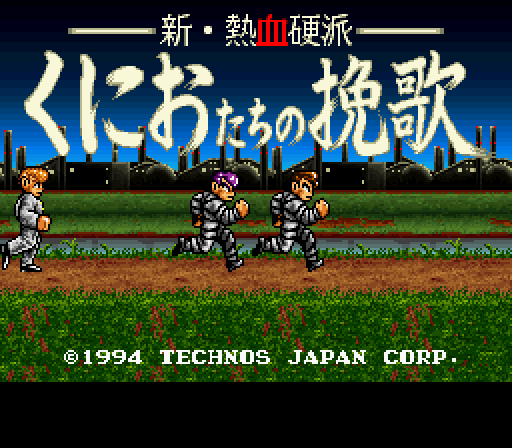 The last brawling game we saw on the SNES was the 1993 release The Original Nekketsu: Tough Guy Kunio. That title seemed to want to marry some of the ideas from the beloved NES release, River City Ransom, while bringing the fighting more in line with the original Renegade. It was imperfect at best, but there certainly was ideas working behind that game. For this next SNES brawling title, though, the series ditches most of that, giving us more of a linear belt-scroller. Its an okay game on its own, but considering the lineage of the series, and everything that's been done in the past, it's feels like a bit of a step back for the series as a while.

Developed by Almanic (one of the few times in this era of the series that the games weren't directly made by Technos), The New Hot-Blooded Tough Guy: The Elegy of Kunio and Co. (titled Shin Nekketsu Koha: Kunio-tachi no Banka in Japan) follows Kunio and his friend Riki after they're framed for a hit and run that seemingly leaves one person dead (and one witness to directly identify the two "killers"). Tried and convicted Kunio and Riki are immediately thrown in prison for who knows how long. However these are two tough guys who won't stand by while their lives are ruined (and other people take over their schools) so they break out to serve up a little street justice.

As they get back to their school they learn about who framed them -- someone that looks just like Kunio -- and what's been going on. Both schools were trashed, and it seems to all because a gang is taking over. Realizing they not only have to clear their names, Kunio and Riki head out, now joined by their girlfriends, Misako and Kyoko (two characters who would later go on to have starring roles in River City Girls). The four then go to save their city while delivering the tough guy violence we all know.

New Hot-Blooded Tough Guy does, in many ways, feel like a step back for the brawling side of the franchise. Gone are many of the elements fans have come to expect: currency, upgrades, and RPG-style progression. This game doesn't really go in for any of that, setting all those ideas aside and instead delivering four playable characters, each with their own (limited) move sets, so you can plow through a series of linear areas. It feels very limited and not all all as deep or interesting as other entries in the series. 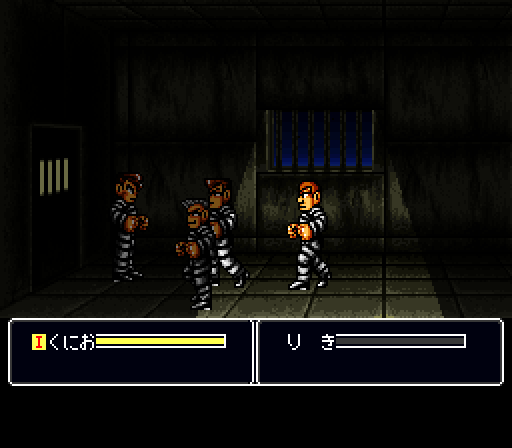 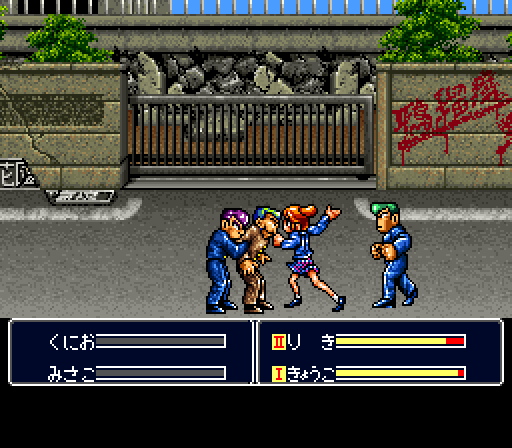 The one addition I do like are the two playable female characters, Misako and Kyoko. While other characters in the franchise have been playable in the sports titles, this is the first time anyone other than Kunio and Riki have been added to the brawling side of the series. The two girls bring their own fighting styles to the game, playing like iterations of the guys while adding a spice of variety to the adventure. Plus, for some battles, their extra health bars do spell the difference between survival and loss. They're great additions.

That is, however, the one area the game is a clear improvement. In all other respects, though, this title absolutely feels like a step back. It would be one thing if the game had ideas to add into the mix while removing the RPG progression and various upgrades, but instead New Hot-Blooded Tough Guy feels like a fairly ho-hum belt-scroller. You start the game in prison and from there move to one area after the next, fighting some dudes until everyone is defeated, and then move on to the next area. You don't have a wide open world to explore, and you don't even get to choose your path through the few areas you get. This experience is as on rails as it can be.

One way the game tries to compensate for this is by adding in bike sections. Between certain areas the team has to travel via bike, fighting off other bikers, all before finally arriving at their destination. In theory this does add to the game, but in practice the bike sections are needlessly tedious. every few seconds an enemy shows up, you kick them so their bike crashes, and then you wait for the next enemy. Some variety, or even some real obstacles, could have spiced these up, but these sections, like just about everything else in the game, feels like a missed opportunity.

One other thing that really annoyed me about the game is that you never know how strong the enemies are. There aren't any health bars or meters for the foes meaning a guy could show up on screen and he could have no health or he could have a ton. It's hard to strategize who to target, or how to handle some fights, because you never know if you're facing a "boss" or just some piddling goon. I also couldn't tell if some of my characters were stronger than others, or if some moves were better to perform, all for the same reason. There's no feedback from the game to tell me how much weaker or stronger the girls were, or if a cyclone kick was better than a back-hand punch. I need that feedback to plan my game and this title simply didn't provide it. 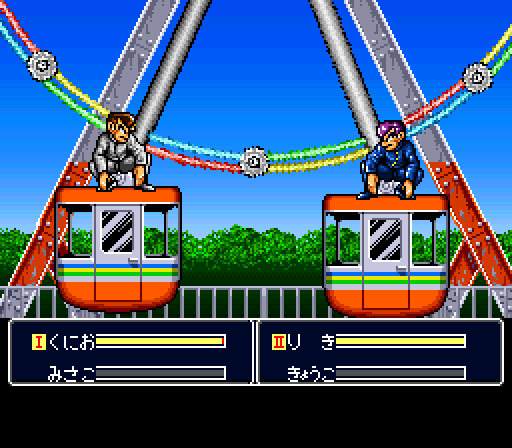 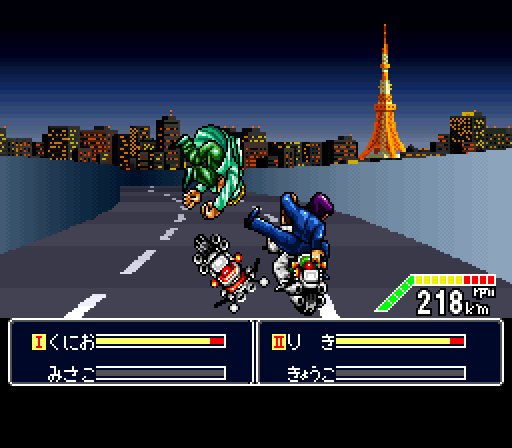 I want to be clear, New Hot-Blooded Tough Guy is a perfectly competent game. It's action feels solid enough, and the difficulty is never so bad that it feels unfair. This is a balanced action game that, in any other series, would be a welcome addition. I actually think it provides enough variety in its stages and foes that it top the SNES Super Double Dragon. Had it been ported to the U.S. as a Double Dragon game with just some minor graphics changes and a quick rewrite of the story (giving Marian and some random girl playable roles) this could have been a good addition in that series. But the Kunio-kun games have set the bar higher. A competent belt-brawler in any other series is a weak addition here.

Some fans might like the back-to-basics brawling action of this game, and I won't deny there's some fun to be had here. But as a continuation of the Kunio-kun brawling experience, I simply expected more. This title is too basic, and too limited, to really carry on the name properly.