Turtle Power, Right From Your Arcades!

While first NES TMNT game was a disappointment, the second game to come to the NES under the brand was an absolute revelation. Fun and fast and enjoyable, easy to get into in all the ways the first release wasn't, Teenage Mutant Ninja Turtles II: The Arcade Game redeemed the Teenage Mutant Ninja TurtlesOriginally dreamed up as a parody of Marvel's Daredevil comics (going so far as to basically reproduce to opening shots of that comic's hero gaining his powers), the Teenage Mutant Ninja Turtles not only launched a sudden boom of anthropomorphic fighting animal comics but have, themselves, starred in multiple comics series, TV shows, and movies. franchise from its first video game misstep. As it obviously should have -- while the first game was an NES exclusive, the "sequel" was actually a port of the TMNT game developed for arcades by a different team and this game was great in all the ways the original NES title was not. 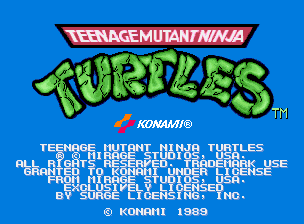 When talking about the Arcade and NES versions of The Arcade Game, it's best to just acknowledge that the two titles are basically interchangeable. While there are a number of classic games that changed during the transition from arcade to home consoles -- Double Dragon being on that comes to mind, along with Dragon's Lair and Strider as well, all translated to the NES -- The Arcade Game barely suffered at all in the transition. Sure, the two games don't look exactly alike (with the arcade edition having noticeably better graphics), but for all intents and purposes Konami did all they could to take the masterful arcade game and port it, one-to-one, in the NES. If that's not an apology for the wretched first NES game, I don't know what is.

Where the original NES game was a side-scrolling game with a touch of beat-em-up elements, The Arcade Game was a full beat-em-up, through and through. It has more in common with Double Dragon or Streets of Rage than it does with the original NES abomination, and its all the better for it. In the arcade up to four people could play, each one taking a turtle, and blast through hordes of enemies as wave after wave of foot soldiers, Roadkill Rodneys, Mousers, and bosses came after our mean green teenagers. The point of the game, as in any linear video game, was to get from one end of the stage to the other, killing everything that got in your path, all to get a chance to do it again in the next stage. And while that sounds monotonous, when done in TMNT II: The Arcade Game, it was absolute fun.

The trick, in both the Arcade and NES editions, was in the way the turtles could combo their attacks. Even in this first edition of the engine (which would see two sequels that further improved the formula) the turtles had a variety of moves they could do, from basic weapon attacks to jump kicks and two-button power strikes. Knowing when to use these attacks, and how to combo the enemies to take them down efficiently, was key to clearing through the game with a minimum of deaths. Having more players in your party helped, although in the Arcade edition it was pretty clear that the more players you had in the game the more enemies would spawn as well.

That was one advantage the NES edition had over the Arcade release: the limits of the hardware meant that there could only be so many enemies on screen, total. Even with two players working together (and only two as, sadly, this game didn't support the multi-tap for four-player action) there could only be so many enemies at work, making a two-player party ever so much more efficient. The lack of four-player support was a bit of a misstep, sure, but its understandable considering the limitations of the NES. Even games that could support four-player action tended to limit the field and scope of what players could do, but Konami wanted to translate as much of the original game to the NES, and if this was the corner they had to cut, I think it was the right decision. 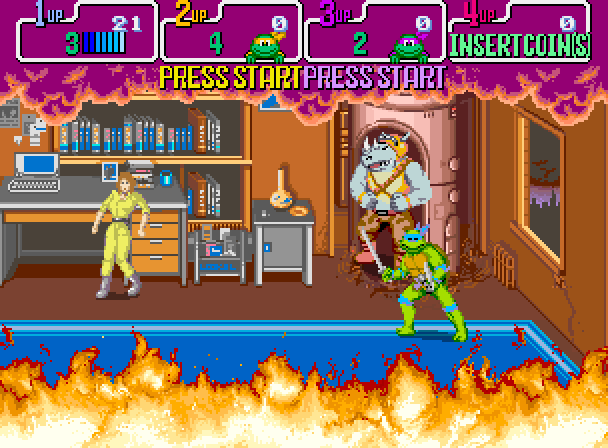 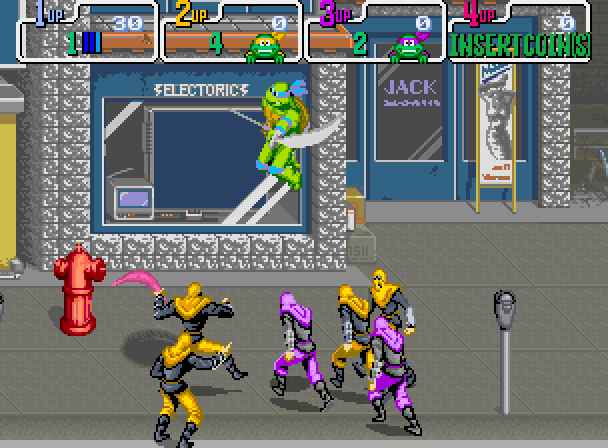 Of course, the other noticeable difference between the two editions, at first blush, is that the Arcade edition looks and sounds much nicer than the NES. Thee original Arcade release was able to have 16-bit graphics and better sound hardware, giving it the edge in the looks and music department. Hearing the turtles (and other character) say actual sound clips from the cartoon was awesome, and that mixed with lush visuals and fantastic music tracks, certainly would make it seem like the Arcade edition has the edge in a head-to-head comparison.

But there's the thing: the NES game, coming out after, had a chance to be rebalanced. That meant adding a new intro section to the start of stage three, and then swapping out one boss fight -- a combined encounter with Bebop and Rocksteady that was soul crushing in the original game -- with a different, better one -- Baxter Stockman in fly form. Then there's full new area, stage six set in a dojo, that grant NES players new challenges that couldn't see in the Arcade at all. So when it came to content, and which game did it better, the edge there would have to go to the NES.

In all other matters, though, the two games really work the same. Same enemy zones, same hazards, same level layouts (aside from the two new sections in the NES game, of course), and the same bosses. If you'd played through the Arcade edition, picking up the NES version would be seamless; all the same strategies you needed for the Arcade edition would translate over. It's really a feat that Konami was able to pull this off, especially because it preserves the one thing The Arcade Game had over its NES predecessor: fun.

Make no mistake, the first NES game was an ambitious game. It had side-scrolling and overworld sections, it items you had to collect, bombs you had to activate, underwater sections to traverse, and a whole lot of exploration. We really do need to take our hats off for what Konami tried to make the first time around. What that first NES game lacks, though, is fun. While The Arcade Game may not be as ambitious, being at its core a pretty linear beat-em-up, it's got fun in spades. It's brightly colored, well animated, detailed (even on the NES), and toe-tappingly enjoyable. The controls are easy to get into, the enemy fights fair (mostly), and there's never once that moment of frustration that was all too common with the first NES game. By switching genres the series managed to improve in every way possible. 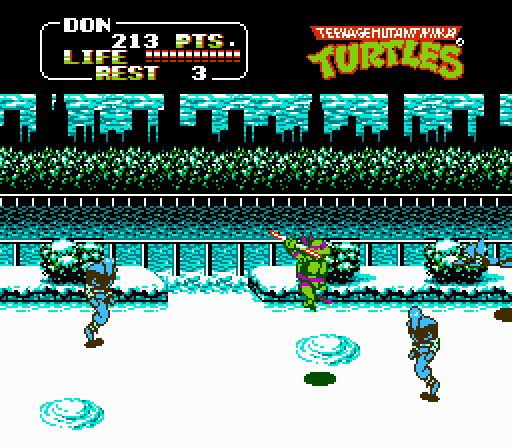 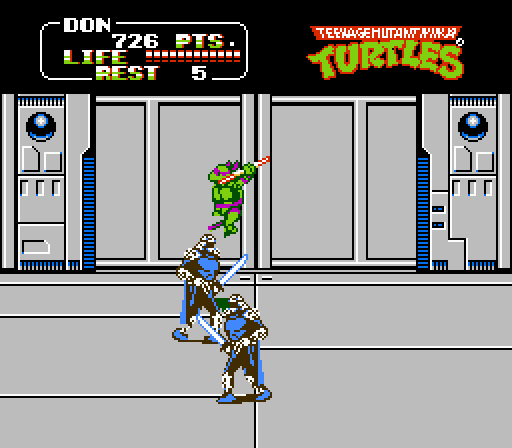 For most of us, while we know there was an NES game before The Arcade Game, for all intents and purposes it's like that game never existed. The console games to come after largely followed the formula of The Arcade Game (barring the occasional fighting game diversion), and even later games in the series based on other movies and cartoons tried to maintain the same action and aesthetic. This game remade the TMNT series and every game after was better for it.

The real question, then, isn't if The Arcade Game is a good game; unquestionably it is one of the best in the series. What we really have to ask ourselves is which version, Arcade or NES is better, and in this regard I simply don't know. If the NES edition had maintained the four-player aspect of the Arcade original, I'd give the win to the NES game. But the lack of four-player support is a sin, one that, when you play the two back-to-back, is nearly unforgivable. It's a feat to be able to play the Arcade original on the NES with basically everything intact, and back when it came out the NES edition was the best way to play the game for most kids at home. Now, though, when you can basically play either version whenever you want (either via repro arcade cabinets or less legal means), I think the edge honestly belongs to the Arcade original. I love the new content, but if you can't have all four turtles on screen, battling together, what's the point?