Teenage Mutant Ninja Turtles II: The Secret of the Ooze

Let's face it, the very concept of the Teenage Mutant Ninja TurtlesOriginally dreamed up as a parody of Marvel's Daredevil comics (going so far as to basically reproduce to opening shots of that comic's hero gaining his powers), the Teenage Mutant Ninja Turtles not only launched a sudden boom of anthropomorphic fighting animal comics but have, themselves, starred in multiple comics series, TV shows, and movies. is ridiculous. It was meant to be, of course, as the original comic was designed as a parody of Daredevil -- the same toxic waste spill that causes Matt Murdock to get blinded and gain super powers is also where Matt drops a jar with four turtles in it, and they too get splashed, turned into their own superheroes. Of course, Matt isn't listed by name, but that wasn't the point. The writers were obviously poking fun at the ridiculousness of comics in general, and with the style and tone of their comic, took a hard jab at the ultra-dark comics of the 1980s (and later 1990s). 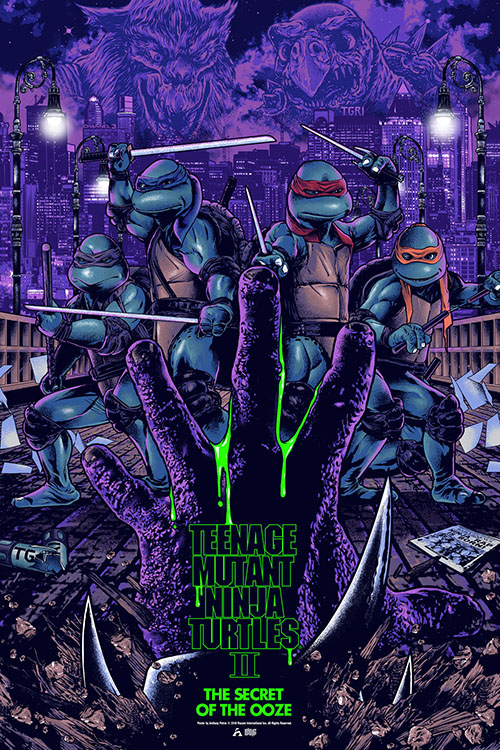 But the Turtles grew outside the concept of their original comic, becoming their own phenomenon. To do this, though, they had to appeal to kids, which was a pretty easy sell, really: kids love turtles. I think it's just the the basic makeup of kids. Selling for dude-bro talking, pizza eating, fun loving turtles to children was easy. Their cartoon came out, and became a total success, and so a movie was soon to follow. This first Teenage Mutant Ninja Turtles movie came out in 1990 and it was a pretty solid success (for the time, at least), causing enough of a stir to warrant a sequel.

The only problem was that the first movie was too dark for the kiddies, with too much violence. Of course, the parent groups complaining about this only knew the cartoon, which was ultra-silly and about as child-friendly as a show about ninjas can be. They hadn't read the comics, which were dark and bloody and very not kid-friendly. "Children shouldn't be exposed to that kind of violence" was the thought of the time, so when a sequel was immediately commissioned, New Line Cinema (who backed all three live action movies of the time period) demanded that this film be nice, gentler, more family friendly. And also, for some reason, that it include Vanilla Ice. And that's how we got The Secret of the Ooze.

In the movie, we get back with the Turtles -- Brian Tochi as Leonardo, Robbie Rist as Michelangelo, Adam Carl as Donatello, and Laurie Faso as Raphael, along with Kevin Clash as Splinter -- who have been living with April (Paige Turco, replacing Judith Hoag) in the months following the events of the first film. While the Turtles go about their business, battling petty crimes while enjoying the fact that the city is a little safer now that the Foot, and Shredder (voiced by David McCharen), have been defeated. However, the Foot is slowly beginning to rebuild under the leadership of Tatsu (Toshishiro Obata), a fact brought to the attention of the Turtles by their new ally, and pizza delivery guy, Keno (Ernie Reyes Jr.).

While the rest of the Turtles want to avoid the Foot while they find a new place to live, Raph charges off on his own (as he does), working with Keno to track down the Foot. However, what he finds is that the Shredder is back, somehow surviving getting crushed in the trash truck at the end of the previous film. And Shredder has his own surprises for the Turtles; he's found out about the ooze that created the Turtles, and after stealing the last vial of ooze, and kidnapping the lead TGRI scientist that made the goop, Professor Jordan Perry (David Warner), he decided to make his own mutants: Tokka and Rahzar (both voiced by Frank Welker). The Turtles aren't just going to have to battle the Shredder, but mutants as well, if they want to save the city again. 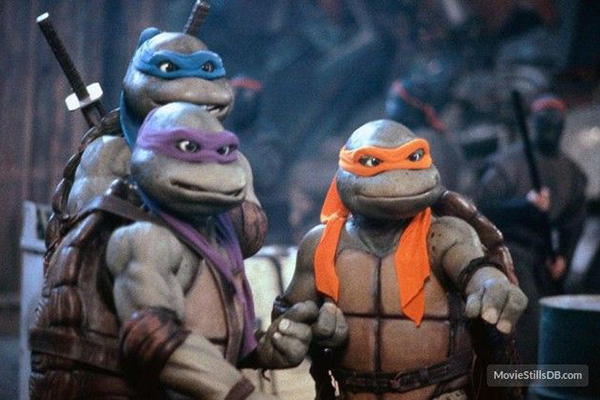 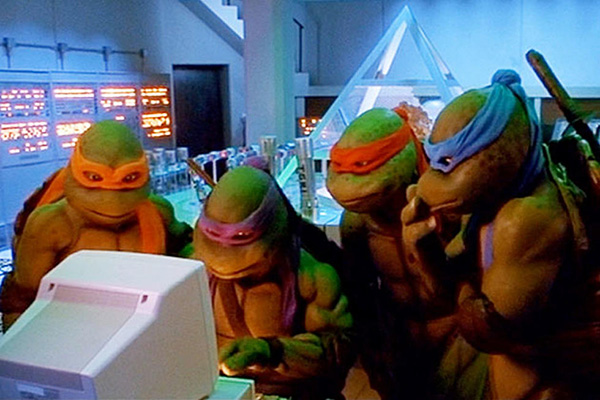 There are any number of issues with this second Turtles film, but the first and most foundational problem is the fact that the movie brought back the Shredder. It's improbable, to say the least, that Shredder survived being compacted and then, somehow, lived for months in a dump before finally reemerging from a pile of garbage where he was dumped (as the movie illustrates), but then the sequel had to walk back his death (as much to make it more kid-friendly as to just have the villain back). The thing is, the Shredder is pretty one-note (part of the reason he dies in the first comic of the original series). He might be iconic, but the film doesn't have anything new to say about him. We already got all his back-story and history in the first movie, so now he's just a petty villain going through the same routine all over again.

The Shredder doesn't even really fight at all this time around. In the first movie he was, to use video game terms, the final boss, and his battle against the Turtles we epic. The best version of that we get here are a couple of scuffles between the Turtles and Tokka and Rahzar; Shredder isn't involved in these, instead just watching from the sidelines. The one big fight we could get with him is at the end, when he's taken all the mutagen and become "Super Shredder", but then he just brings a building down on himself and the turtles flee. There's no battle, no climax, just a lot of nothing.

Frankly, nothing about Shredder works here, and that includes the Super Shredder form we see at the end. I was ten when this film came out, and even then I was sitting there, picking apart how Shredder looked the way he did. In the original stories the mutagen turned someone into the last animal they were near. Even more recent version of the ooze cause humans to merge with nearby environmental elements. But here, Shredder just gets bigger, extra swole, and somehow his suit (not himself, mind you) grows extra blades. Based on everything we know about the mutagen in this movie, it just doesn't work. He should have become a giant turtle since he was near our heroes, or an extra scuzzy version of Vanilla Ice (so, you know, Vanilla Ice).

The Foot, too, are totally useless. In the previous film we had a lot of development about that team of ninjas, how the Shredder lured them in with fun and games and freedom, feeding off of orphans and runaways. Here, though, all the Foot Soldiers are adults, and you get no sense of why they're with Tatsu (and then Shredder), what their goal is, or what lures them in. Tatsu and Shredder live in a dump, and yet all these adults (often overweight ones, if you pay attention) flock to the Foot Clan and we never learn why. Like Shredder, their motivation, their story, is an afterthought. 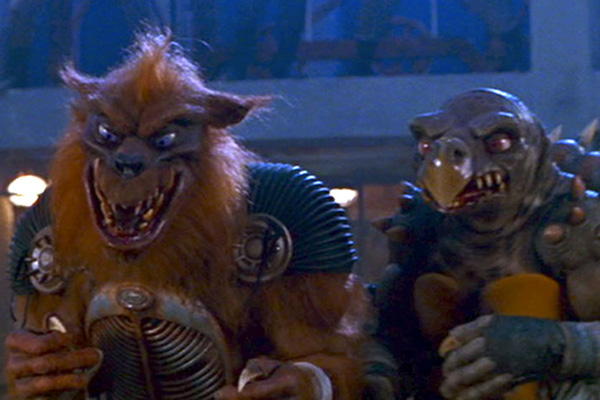 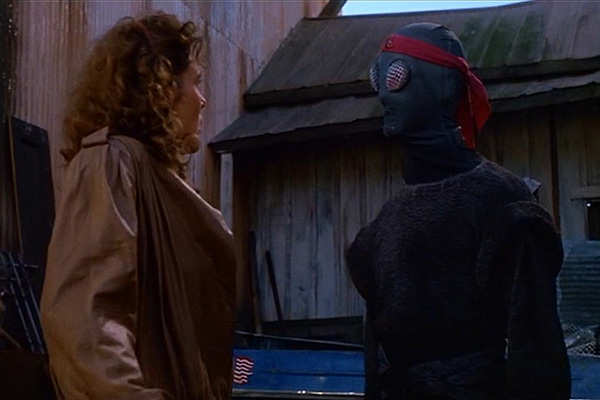 The Turtles get more of a focus now, probably because it was easier to make these guys funny and kid-friendly that trying to perform that makeover on a band of evil ninja criminals. And, admittedly, the Turtles are funny here at times. There was the occasional joke that made me chuckle, and few that rated an outright guffaw, but by-and-large the shtick on display this time around we more tiresome than amusing. The Turtles joke and laugh and setup all kind of elaborate gags, even when surrounded by twenty guys. Every time they'd say something, everyone would stop, and they'd do their joke before the movie picked up and started the action again. By the end I just wanted them to shut up and actually fight.

But no, the action in this movie is awful. Despite still having been produced in part by Golden Harvest, the Hong Kong action studio, this film barely has any action at all. This is, of course, another change to make the movie more kid friendly -- less fighting, less beating guys up, and absolutely don't let the heroes use their actual weapons -- so what we get are elaborate setups for gags while the evil ninjas just stand around the Turtles in perimeters, bouncing back and forth on their heels waiting for their turn to get hit by a Nerf bat and batted at with a sausage (two things that happened in this film).

The few times we get actual action are when the guys fight Tokka and Rahzar, presumably because having mutants fight other mutants is fine but they absolutely can't hurt humans. Still, even then the action is marginal at best, and it's there more so the Turtles can riff than actually be ninjas. While I like comedy in my Turtles productions, there has to be a balance. The first film managed to find the right tone, splitting it nicely between laughs and martial arts fighting. This film abandons half of that material altogether (the fighting) and leans into kid-friend humor. After a few minutes of it you're already wishing for the film to end.

I know there are children of the era that love Teenage Mutant Ninja Turtles II: The Secret of the Ooze, I was never one of them. As the years have gone by, this sequel has aged poorly, being even less fun now than it was back in the day. The first film might not have been perfect, but it was the right mix of fun for fans of the Turtles, old and new. This time around, though, the only ones enjoying this film are the kids... and maybe not even them.