Gotta Save Them All

The Teenage Mutant Ninja TurtlesOriginally dreamed up as a parody of Marvel's Daredevil comics (going so far as to basically reproduce to opening shots of that comic's hero gaining his powers), the Teenage Mutant Ninja Turtles not only launched a sudden boom of anthropomorphic fighting animal comics but have, themselves, starred in multiple comics series, TV shows, and movies. arcade-style brawlers (The Arcade Game, The Manhattan Project, Turtles in Time, and even The Hyperstone Heist) are held up as classics of the form. There are a number of brawling type games -- your Double Dragons, Final Fights, Battletoads, and the like -- but there's a certain mix of game play styles in the TMNT games that makes them beloved classics (certainly, in this writer's heart, better than other brawling games). 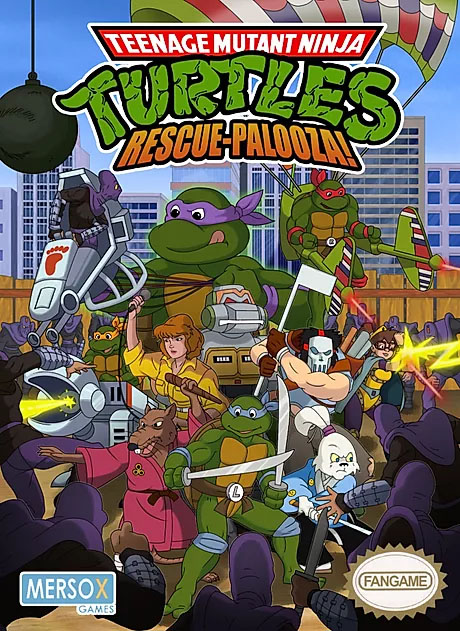 It's a tragedy, then, the none of the TMNT games released since Konami's classic era (ending with the sub-par TMNT Tournament Fighters) have been able to match the games of he heyday. Ubisoft and Activision, the two companies to try releasing TMNT games since, have failed to recapture that magic. Even Konami had the license for 2003 TV series and those games were pretty sub-par. What fans wanted, and have been clamoring about for years, is a return to form for the series.

Thankfully a recent release has managed to find that perfect mix of game play. It wasn't Konami or Ubisoft or Activision that managed to make that great game, though, but a fan: Merso X. His game, TMNT: Rescue-Palooza, is a homage to all the classic games of the series, from the arcade and NES titles, to the game boy games, with additional nods to the fighting game, the Playmates toys, and even the Coming Out of their Shells tour. It's an absolute, trippy blast from start to finish, a loving testament to the power of fans.

At first blush, this game looks like a merging of The Arcade Game and Manhattan Project. A large portion of the levels are taken from those two games, although not all of them -- there are some nods to Turtles in Time, along with all three game Boy Games, Fall of the Foot Clan, Back from the Sewers, and Radical Rescue, along with the first NES TMNT. You open to a shot of the city, a overworld hub you can explore, a la the first NES game, before diving into all the of the various stages of the game. Just about everything is open to the player (aside from the last three missions), so you can play the game in just about any order you like.

Although much of the content if from the NES and Game Boy games, everything has been touched up to the level of Turtles in Time. The level of care, spit and polish, that's been added to the graphics that really makes this game shine. As per the creator, he really wanted to create a Super Mario All-Stars for the TMNT series. I'd argue, though, that this package goes so much farther, crafting an remixed game that goes so much farther than just an All-Stars collection. This is a truly loving tribute that's a hell of a lot of fun to play. 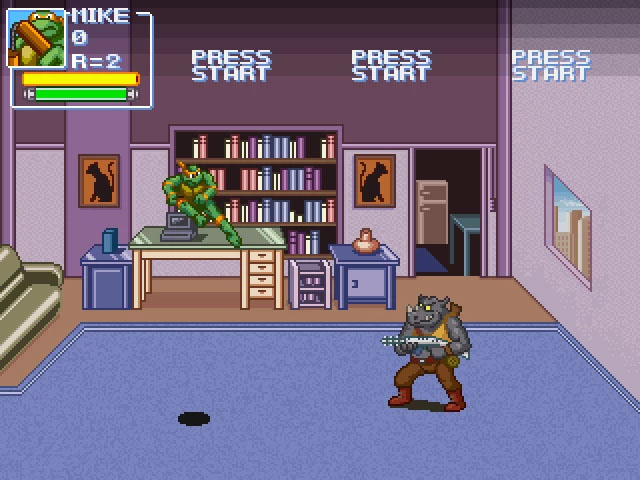 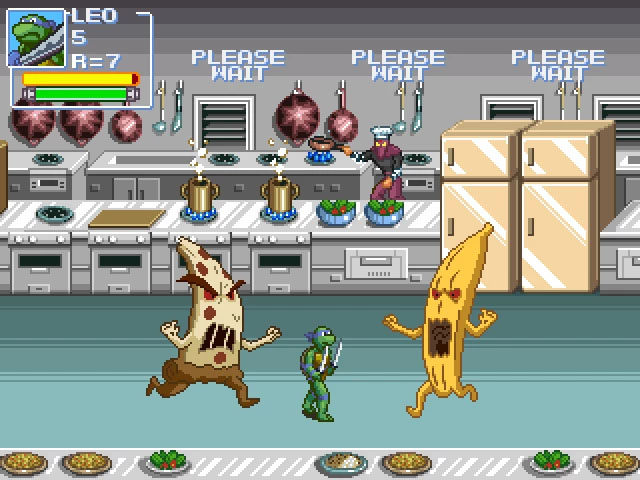 Despite what the name might make you think, there are no Metroidvania elements in Rescue-Palooza (so despite the name, this isn't related at all to Radical Rescue in that respect). Yes, you do "rescue" characters as you play through the game, but rescuing them doesn't suddenly unlock to sections of levels or key-locked areas. The rescuing adds to your team instead so you have even more brawlers to choose from.

The game starts you off with the four turtles, right from the start, each equipped with all the basic moves you'd expect: slashes and kicks, jump attacks, shoulder bashes, and special moves. Each new character you add to your arsenal is able to pull off the same kinds of moves, but the sheer variety of the fighters (at least two unlocked from every stage you complete) along with the varying capabilities, means you could spend hours trying out every single character, finding different play styles to work with and new ways to play stages just because of all these different characters.

Cooler still, the game isn't just limited to the traditional "hero" characters. Sure you get to unlock Casey Jones and April, Usagi Yojimbo and even the swamp frogs (and yes, even Channel Six's idiot character Vernon), but you also unlock the bad guys as well, like Dirtbag, Ground Chuck, Shogun, and Chromedome. There are so many characters in this game, an insane number of them, that every player is going to have so many favorites, so many that they want to play as. No one will lack for options.

That's great because the game has easy drop-in/drop-out support for up to four players, with plenty of alternate colors for all the characters so anyone can play as any character they want. It's absolutely insane the amount of variety this game has on offer, and the biggest selling point, beyond the fan love, the dedication to honoring everything in the whole franchise, and the updated graphics and sound, is just the sheer number of characters you can pick and play as. 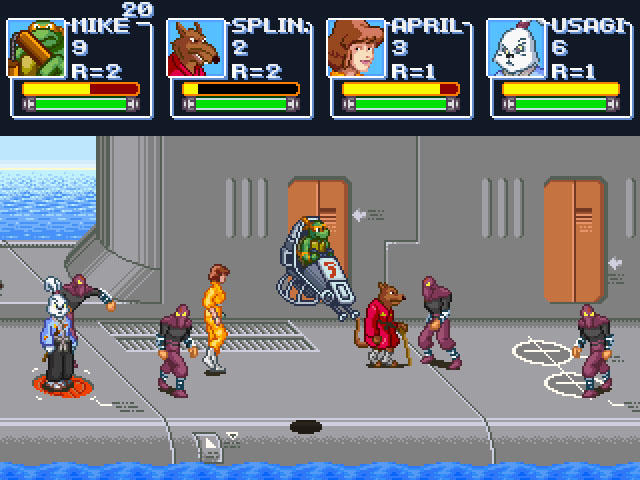 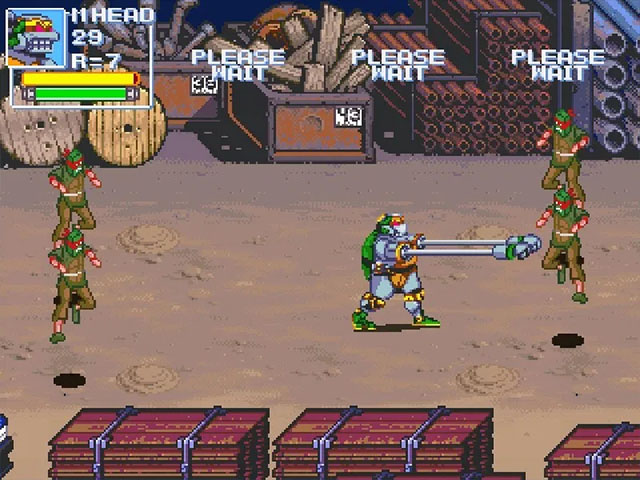 Adding to that, of course, is the fact that the game is so smooth to play. If you remember anything about the classic games, it'll be easy to get in and get settled into Rescue-Palooza. It's a simple matter to pick up a controller and feel like you've been transported right back into the 1990s when these games were king, playing around in here just like it was old times. The game works for fans, old and new, without losing a beat, feeling like it could have been released by Konami itself. It's perfectly assembled in that regard.

And then you get to the lovely fan touches, like the fact that the character select screen is setup like a collection of action figures. If you remember the old cards from the action figures, with their "vital statistics" and pizza points included, this game honors that. Plus, all of the voice work is ripped directly from the old cartoon series, giving another nice nods to the history of the series. Hell, again, there's a reference to the Coming Out of Their Shells tour, something basically no TMNT wants to admit they listed to over and over back in the day. That's dedication right there.

As it's a fan game, TMNT: Rescue-Palooza is free for all to download and play, and I'd heartily recommend you do so. If this were released by any of the AAA-game companies, it easily would have been put on a download store for $20 (or more), and it would be well worth it. Hell, if this somehow made it onto a physical disc, I'd totally buy it. But a game this good, for free, is worthy of everyone downloading it and playing through. You simply cannot find a better TMNT game that's been released in the last decade, free or not. Play this game, you'll love it.