On a (Mediocre, Non-Radical) Mission

Credit has to be given to Konami: they really wanted to take the Teenage Mutant Ninja TurtlesOriginally dreamed up as a parody of Marvel's Daredevil comics (going so far as to basically reproduce to opening shots of that comic's hero gaining his powers), the Teenage Mutant Ninja Turtles not only launched a sudden boom of anthropomorphic fighting animal comics but have, themselves, starred in multiple comics series, TV shows, and movies. license and spread it to as many gaming markets as they could. Along with the NES and Game Boy (and eventually the Genesis), they also attempted to also port the shellheads over to PCs. It's commendable that they made the attempt, to try and get the Turtles into as many hands as possible (while, of course, getting as much cash as they could). The problem, of course, is that in many of these cases the end product was pretty compromised to the point that people didn't really want to play the games. 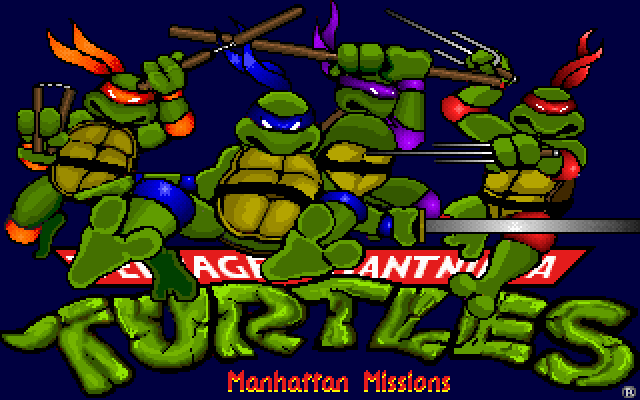 The trouble is, of course, they everyone wanted to play The Arcade Game and many of the early games in the series -- the first NES game, Fall of the Foot Clan -- were a far cry from the enjoyable play-style of the arcade release. While those games do have their fans, the following for them is nothing like the original Arcade release. This was due to the limits of the hardware, as well as Konami's programmers needing to learn how to push a console to its limits. Getting an NES or a Game Boy to play like an arcade machine takes a lot of work and skill.

Releasing a game on a PC was even harder back in the day. That might sound odd considering that PC games now always go on and on about how playing on homebuilt machines is the best experience possible, but you have to remember that way back when (in the distant land of 28 years ago), most home computers weren't that great and only a select few gamers had a rig that could play something to rival the Arcade experience. If gamers were going to play a TMNT title, Konami would have to make something that would work on most machines.

It's a supposition on the part of this writer, to be sure, but it makes sense when you play Manhattan Missions. The game is a beat-em up in a way, but it's one that feels very specifically designed for a common-denominator machine built in the early 1990s. Everything is modified and stripped down to make sure the game will work (without crashing of lagging) on the cruddy PCs of the era. That's how we end up with a series that is normally a smooth, scrolling fighting experience becoming a Prince of Persia clone with stages broken into rooms and minimal action from one scene to the next. Manhattan Missions is, in short, a very compromised experience.

In the game Shredder is, of course, up to his normal tricks and the Turtles have to rush off to stop him. But instead of just diving into six or so stages of glorious (but also linear) battle, the heroes instead have to go through a variety of mission trees, gathering intel (and sometimes items) so they can figure out where the Shredder is hiding and how to stop him. Oh, and they only have 48 (in game) hours to save the day. It's an interesting concept, one that lends itself to a very different TMNT experience. At the start of the game, in fact, I was more than a little excited to play something different from the standard fare TMNT game. Manhattan Missions certainly does promise something bold and new. 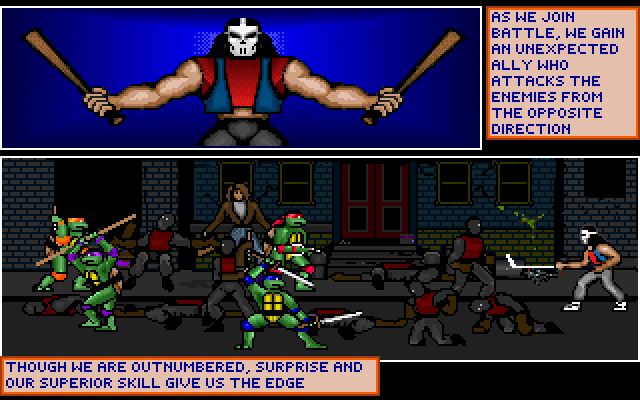 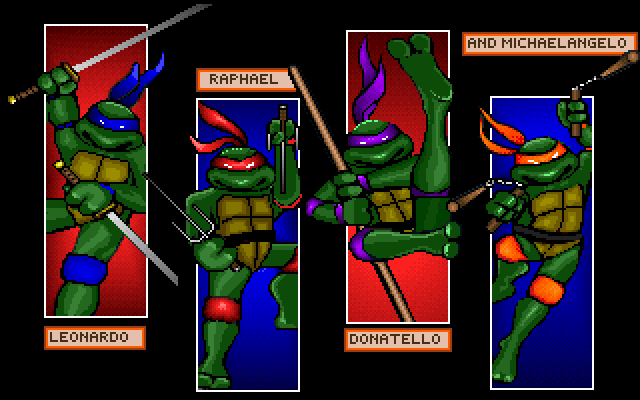 Unfortunately the experience starts the break down the second you actually get into the game. While the intro of the game, designed to look like comic books pages, and the base graphics of the game do look nicer than anything player had on home consoles, the rest of the game is a giant step back for the series. As I noted above, the game is, in essence, a Prince of Persia clone; the Turtles will select a mission from their map of the city and then go right to that location. They will then have to battle goons, moving from platform to platform, up ladders and across stages, each area broken into non-scrolling rooms, until they find the boss of the area and defeat them in mortal combat. A good concept, but the execution is beyond lackluster.

For starters, the Turtles move like molasses, slow and tired with a lot of lag between when you press a button and they perform their action. If that weren't bad enough, the designers implemented a running and combat stances, which players have to actively switch between. Shift to combat stance and the Turtles will inch forward, weapons drawn, with the ability to kick, slash, poke, and fence their way through their enemies. The combat, though, is really slow (not just because of the lag) as well as repetitive; after a few screens of this I was already bored with the mechanics, and this is ostensibly a beat-em up so if I'm getting bored with the raison d'etre of the game, that's a problem.

Worse, the battles with the basic enemies are all pretty unfair and cheap. The enemies have almost no knock back and can't be juggled or shaken off. The hit boxes of their weapons are also pretty huge meaning, more often than not, you're going to take damage if you decide to go toe-to-toe with even one goon. Most rooms, though, have multiple goons on screen and they really like to gang up on you. Combat is just such a frustrating experience it's better to just avoid it whenever possible.

If you're anything like me, though, you'll likely just try to run through the basic rooms, then, while taking as little damage as you can manage. If you do happen to take "lethal" damage, it's not really a big deal as another Turtle can hot-swap in immediately. There aren't any full health refills at the ends of stages, but you can rest for an hour at a time back at the sewer den, regaining you health. That's how the game forces the time management mechanic of the adventure -- the game itself is relatively short and, inside a mission, the clock ticks down in real time. But with all the healing you might have to do those 48 hours start to feel very precious. This is a solid mechanic and, if the combat throughout the stages were more fair, I probably would have really enjoyed it. 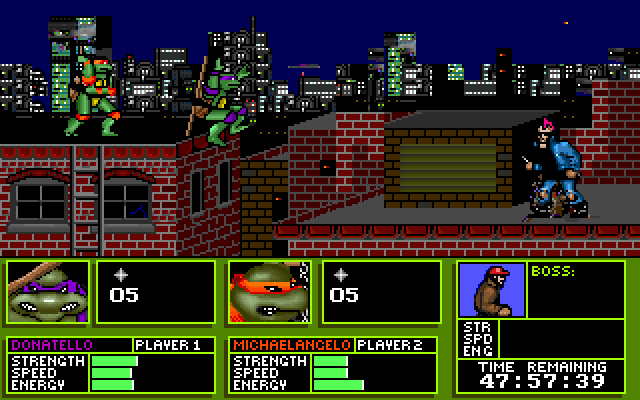 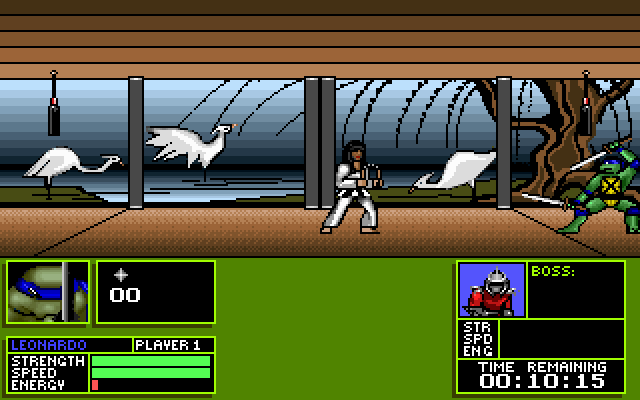 The bosses only make things worse, primarily because there's no difficulty curve for them. Most of the bosses can be easily cheesed just by getting the turtles inside their hit box and wailing away while they try to shoot projectiles past their heads. Some of the bosses, though, are melee warriors that love to cheese the Turtles in return. Getting past them either requires more skill with the fighting than I ever managed, or using up one of the precious shurikens the Turtles can find in the stages. These things are beasts, super-powered weapons that can peel off a quarter of a boss's health instantly. I got through more than a few of the worst bosses with the help of these babies, I guess, is another way to cheese the game.

Then there's thee end of the game, which consists of a few screens of (truly atrocious, instant-death) platforming followed by an aggravating boss rush. I don't know why the designers felt that a boss rush was the best way to cap this game, but you have to take your four weak heroes and get them past four powerful bosses all so you can face off against Shredder and win the day. And, amusingly, Shredder himself is super pathetic, one of the easiest fights I had in the game just because he has no reach and deals very little damage. It's... something, that's for sure.

Conceptually I like Manhattan Missions. Giving the player an open world, letting them run missions in a non-linear order, and having a home base to sleep and train at is all very cool. On paper this game is a solid success, but the devil is in the details and, once the programmers had to make this game (and make it work on a PCs of the day) everything fell apart. This game is an utter mess, unfun and, at times, unplayable. Konami deserves credit for trying something new, sure, but their execution was absolutely abysmal this time around.