Teenage Mutant Ninja Turtles: Out of the Shadows

It's easy to crap on the first of the two Michael Bay Teenage Mutant Ninja TurtlesOriginally dreamed up as a parody of Marvel's Daredevil comics (going so far as to basically reproduce to opening shots of that comic's hero gaining his powers), the Teenage Mutant Ninja Turtles not only launched a sudden boom of anthropomorphic fighting animal comics but have, themselves, starred in multiple comics series, TV shows, and movies.. Hell, a few years ago I did just that. I hated that film back when I first watched it, crapping all over the film because I could (and it was fun to do so). When I went back and watched it for this site I gave the film a fairer shake, watching it not only with a critical eye but also just to see if I could figure out why do many people flocked to the film. And, I had to admit, it was a fun movie. Stupid, and not something I ever need to watch again, but fun all the same in its own basic way. I understood why it was a hit and spawned a sequel. 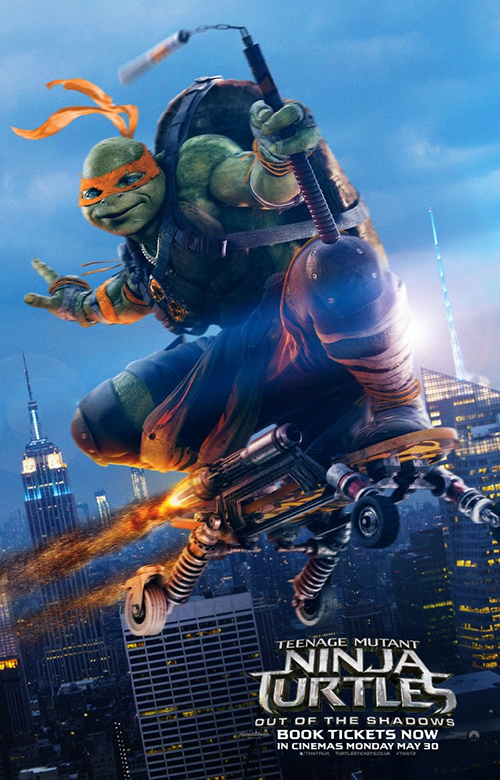 By that same metric, though, having gone back and watched the sequel, the 2016 Teenage Mutant Ninja Turtles: Out of the Shadows, I can absolutely understand why this film did not rate another sequel and why, at this point, Nickelodeon has decided to go back to the drawing board and reboot the film series again. This film is a massive, monumental fuck up, the kind of film where you watch it and go, "did they actually think this was good? How did this get made?" Where the first film was stupid but enjoyable, there's no qualifying term here; Out of the Shadows is just stupid. Full stop.

After having saved the city from the evil Shredder (Brian Tee), the Turtles -- Pete Ploszek as Leonardo, Alan Ritchson as Raphael, Jeremy Howard as Donatello, Noel Fisher as Michelangelo -- had to fade back into the shadows, unable to claim the credit the deserved for fear humanity would look on them as monsters and freaks. So, instead, they let their friend, Verne (Will Arnett), take the credit so there was a hero to tie to the story. Meanwhile, the four green brothers continued to assist their best friend, April (Megan Fox), in her various investigations.

And she's stumbled on quite the case. It seems that brilliant physicist Baxter Stockman (Tyler Perry) is plotting to free the Shredder during a prisoner transfer. Although the route is tightly plotted by officer Casey Jones (Stephen Amell), Baxter tears it to pieces, easily freeing Shredder. But during transport, Shredder is magically whisked away to Dimension X where alien-brain Krang (Brad Garrett) pitches a team-up: if Shredder finds the three pieces of an alien transport device, he can summon Krang's ship and the two can conquer the Earth. The Turtles will have to figure out the plan, track down the parts, and grab them before Shredder is able to build the device, lest Krang invade the Earth and take over the world.

It's hard to know just what the producers were thinking with this film. Although ever TMNT film series has been obsessed with the Shredder, having him be the villain over and over again (even though he wasn't that interesting a villain in the original comics), this movie not only draws inspiration from that character but the whole damn 1980s cartoon. It's like they binged on the old cartoon and then said, "we want this, but dumber," (not that the old cartoon was the height of intelligent storytelling, mind you). 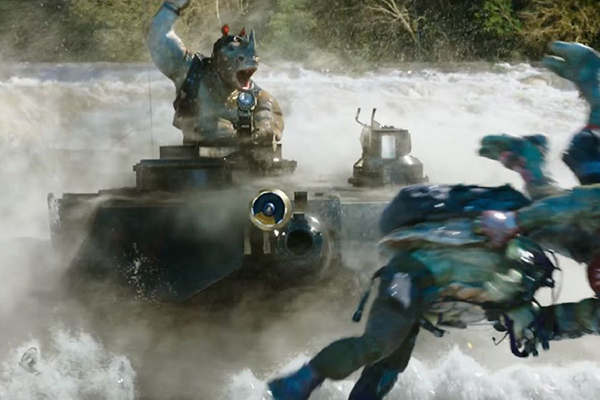 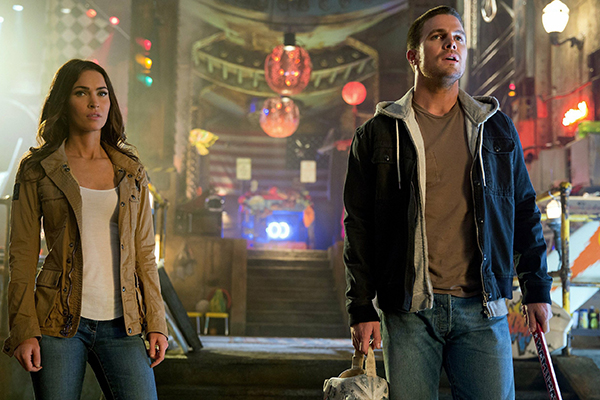 Perhaps Nickelodeon wanted this sequel to be more family friendly (shades of The Secret of the Ooze) as this film feels softer, kiddier, most appealing to the children in the audience. It certainly has all the hallmarks of a production team taking the original, doubling-down on the comedic elements, and then saying, "this will please the kids and the parents will have to come as well." How else can you explain all the decisions they made here?

For starters, no one needed the Shredder a second time around. We already had his story, such as it was, and any second dip would just retread the same material. He's back again, he wants to conquer the world again, and he's not all that interesting of a character (again). Where the Turtles are loud and fun-loving guys, the Shredder is stoic and dark. The right production plays on this, having the green dudes act as a foil to the straight-man Shredder, but instead this film just gives Shredder his own comic relief and then lets them take over the film.

The two goons, mutant-warthog Bebop (Gary Anthony Williams) and mutant-rhino Rocksteady (Stephen Farrelly), are awful. Brash and stupid and unappealing, these guys are even worse here than they were in the original cartoons (where they were just dumb but didn't take over the series). These are lowest-common-denominator characters, acting loud and stupid, making fart jokes as their high-form of entertainment, and they are in just about ever scene. It's so obnoxious.

Not that the film would be that much better if they weren't in the film as, without them, there's barely a film. The movie is basically given 30 minutes or so of actual plot -- the Shredder escape, Krang's meeting, and then the fetch quest to find the missing parts -- and then the rest of it is just padding and filler. Very little actually happens in the film, it's all just waiting for the next "comedic" set-piece or big action sequence. Note, though, that the comedy isn't funny (I chuckled twice during the whole film and felt bad about it both times) and the action is poorly filmed and not in the least bit appealing. 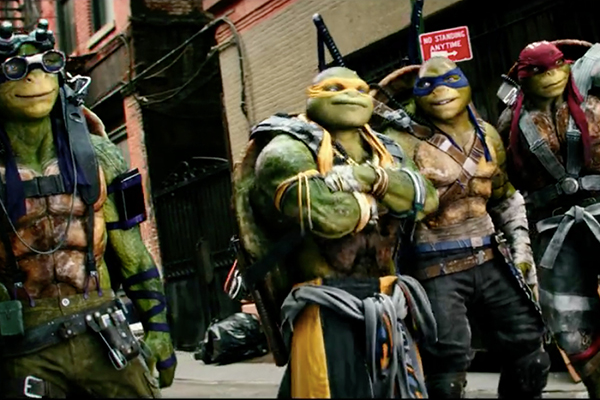 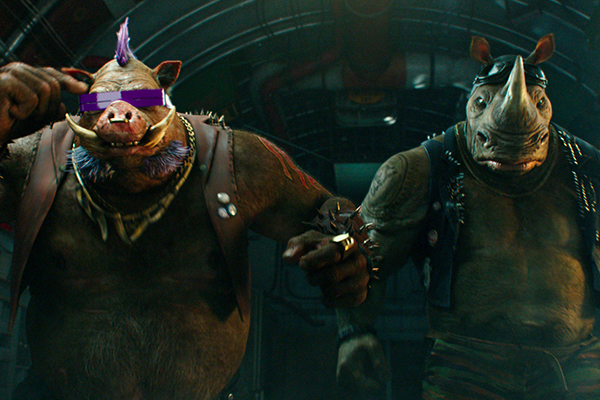 Although Michael Bay didn't direct either of these films, he is a producer and his fingers could be felt all over the first movie. It was well executed, with solid action choreography and direction. That's not the case here, as the film, not under the direction of Dave Green, is shoddy even when it comes to its action staging. Things are filmed too close (even when it's all CGI shots), with lots of cutting, bad angles on the action, and ludicrous staging that breaks the whole mise-en-scene. For something with Michael Bay's name attached to it, this is one of the worst looking films I've seen from the director/producer.

There really just isn't anything redeeming about this film. The Turtles are wasted here with a retread brotherly storyline that was already resolved in the previous film. April has nothing to do (with more time given to Verne than April, weirdly) so she mostly stands around while the camera lustfully stares at her. And new character, Casey Jones, is barely sketched in at all. He's a cop and he likes to skate; that's literally all we learn about him. Amell is charismatic here, as always, but that's not nearly enough for him to craft a character around. Instead we get the Bebop and Rocksteady show, followed up by the Krang Climactic Action Spot, and it all fails utterly.

All the anger and bile I wanted to cast at the first film, and couldn't, I can expel here because this film is an absolute travesty. Very rarely do I see a film and think, "yeah, the studio was right to kill this franchise because I never want to watch another one of these again." Out of the Shadows is just that film. It's so bad I wouldn't be surprised if, somehow, we never see another big-budget TMNT again.