While the 1989 NES Teenage Mutant Ninja Turtles was a disappointing game, I don't think there's anyone out there that would say the same about The Arcade Game. On every level that game was amazing, not only when it played in arcades (with the four play console so all the Turtles could fight as a team) but also on the NES which gave us a pitch-perfect port of the Arcade experience. It provided the perfect Teenage Mutant Ninja TurtlesOriginally dreamed up as a parody of Marvel's Daredevil comics (going so far as to basically reproduce to opening shots of that comic's hero gaining his powers), the Teenage Mutant Ninja Turtles not only launched a sudden boom of anthropomorphic fighting animal comics but have, themselves, starred in multiple comics series, TV shows, and movies. experience to delight all the fans.

With a winning game out on home consoles, Konami had to create something to continue the franchise. The obvious choice would be to make a direct sequel to The Arcade Game, something that will evoke the experience players loved, and that was exactly what Konami crafted in the third NES game in the series, Teenage Mutant Ninja Turtles III: The Manhattan Project. Built directly on the NES engine for The Arcade Game, TMNT III provides a longer version of the Arcade experience, in theory giving fans exactly what they wanted: more of The Arcade Game.

In practice, The Manhattan Project isn't exactly the winner fans might have been hoping for. I remember back when the game came out, eagerly popping it into a console with my friends so we could play. And, for the first couple of stages we got to enjoy an expanded experience with long, diverse areas and a lot of fun to be had. The problem I had then, which was only reiterated when I went back to the game now after all these years, was that this third NES game provides all the same beats of the previous game without anything new thrown into the mix. It's more of The Arcade Game, but exactly that, leaving me with an experience of "been there, don't that."

On it's face TMNT III is a very competent game, as it should be since it's basically a re-skinned version of The Arcade Game. All the same combat and mechanics are in place, with the same tight controls and solid feeling fighting you'd expect. Some nods were made to change the engine, and most of these are improvements. While the power slash from the first game was removed, it was replaced with an overhand-toss of the enemies that deals similar damage and, when their bodies collide with other enemies it can deal damage as well, making it a very useful move for crowd control. Each of the Turtles have been given their own specific power move -- Leo does a katana cyclone, Donnie becomes a bo-staff buzz saw, Rape does a drill-charge with his body, and Mikey does a backward kangaroo kick -- and these can deal even more damage (and, sometimes, multiple hits to a boss). These moves come at a penalty, though, as using them drains a bar off your health. If you want to try them all out, you can, as players aren't stuck with playing one character through the game -- when you die you can swap Turtles with ease.

These improvements are great and help to expand the experience. They are, however, the only real evolutions of the game as so much else feels like a retread of the previous title. You start off roaming the beaches of Miami, battling the Foot across a stretch that feels a lot like the second stage from the previous game. Then it's on to a surfboard section that plays like the skateboard section from the previous game (complete with all the same kinds of enemies, and helicopters) to deal with. And then its onto a submarine (that feels like a mini-Technodrome) before dealing with more streets, sewers, rooftops, and Technodrome levels. So much of it resembles stages we've seen before, with enemies we've fought a ton of, and there's nothing new in the mix.

The lack of evolution in the enemies is really bad. The foot soldiers, the ever present foes that get killed constantly in these games, have a couple of new attacks -- one set till throw heavy weights and barrels while another shoots laser chains -- but 99% of the Foot you see will be the same guys fought in the last game. There are also mousers (from the last game) and rock soldiers (from the last game) making up the rest of the regular foes, and no, none of them really iterate either. If you remember fighting them the last time this game will make you loathe the sight of them.

Of course, part of that is the fact that The Manhattan Project features much longer stages than the previous game. While that might sound good, it really just means the game will pack in more of all these enemies you've already fought (on stages you've basically seen before), which gets really tiresome very fast. If the stages had been shorter, the retread packs might not have felt as bad, but for a game that, playing at typical pace, will take you an hour things are going to get tedious pretty quick. I know I felt like I'd seen all the game had to offer 15 minutes in and was ready to move on with only a quarter of the game completed. It was so tedious.

One would hope the bosses would be a bright spot, but many of these guys are, like so much else in the game, retreads of previous encounters. Rocksteady is the first fight, like he was the last time, and he basically fights and functions in exactly the same way this second time around. Bebop also shows up again, this time with a morning star attached to his head (which I swear they got from the "Wacky Action" figure of Bebop made by Playmates) but, aside from that new item he's the same fight as before, too. There are also giant mousers to fight who drop other little mousers, so these are basically just Baxter Stockman fights re-skinned, and you have to deal with two of them over the course of the game. Some enemies are new, like Leatherhead, Tokka, and Razar, but none of them were really all that special, especially when the strategies for taking them out are the same as most of the boss fights from the previous game.

The three encounters that seemed actually different are loaded near the back of the game. Shredder has a completely different fight this time around, acting like a souped up version of the Turtles, actually, with an overhand katana attack, a power-move kick, and a strong offensive/defensive routine. I was really glad they didn't make him a duplicating sorcerer again, even though I was worried it, too, would be another retread, but I was pleasantly surprised by this battle. Krang returns, too, and while is fight seems functionally the same as before, at a certain point he splits in half with his legs wandering around freely, making this fight a tad more hectic and interesting. And, of course, Super Shredder shows up at the end for a different kind of sorcerer battle. These fights are all enjoyable and show a bit of creativity in the boos encounters. The problem is how late they arrive, leaving me feeling like it was too little, too late for the game. 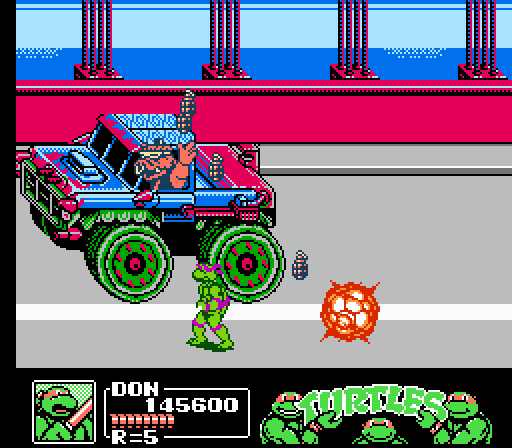 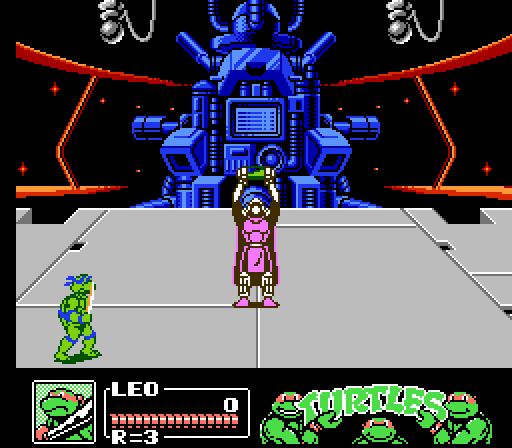 I don't want to make it sound like at any point this was a bad game. It's not, it's just not a very creative one either. If you've played through The Manhattan Project everything here is going to feel like more of the same without anything new or interesting thrown into the mix. Some fans probably won't hate that if all they wanted was a longer experience from the previous title. For me, the NES iteration of The Arcade Game was the right length for this experience; any sequel would need a lot more creativity to really hook me.

That said, if somehow you'd never played any of the Arcade-style TMNT games before coming into this title, this game probably would be everything you wanted. It's still a tight experience with bright graphics, amusing moments, and a lot of Foot-fighting action. If this was the only one of the NES games that you played, I think you'd probably enjoy the heck out of it. After the previous title, though, this game just isn't able to shake off the cobwebs and feel like something new. It's an imitation of the previous game, built the same way, and while that might have seemed good enough for Konami, I expected more.