Although the classic Teenage Mutant Ninja TurtlesOriginally dreamed up as a parody of Marvel's Daredevil comics (going so far as to basically reproduce to opening shots of that comic's hero gaining his powers), the Teenage Mutant Ninja Turtles not only launched a sudden boom of anthropomorphic fighting animal comics but have, themselves, starred in multiple comics series, TV shows, and movies. games -- especially The Arcade Game and Turtles in Time -- are the titles everyone fondly remembers when they talk about the games in the series, there were other titles that many of us children of the '90s used to play. Maybe not with the regularity of those classic titles, sure, but they did help to give kids their fix of Turtles action in between bouts of arcade action. 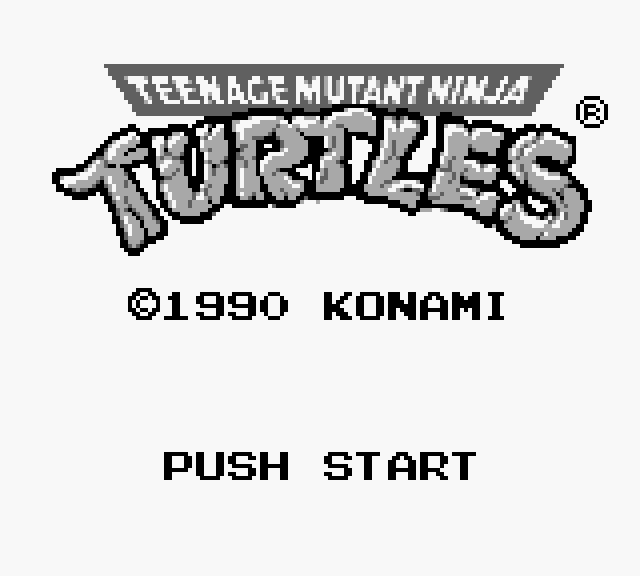 Being able to take TMNT beat 'em up action on the go was something every kid wanted. And while the Game Boy game, Fall of the Foot Clan tried, it's hard to say it really delivered. It did exactly what the copy of the box promised, letting players go through the stages of the game as any of the turtles, all so they could confront Shredder and Krang and blow up the Technodrome, but just hitting the basic, expected beats wasn't enough to make this game a winner.

For starters, anyone wanting the big, sprawling, melee action of the Arcade titles was dreaming. Instead of those kinds of stages, Fall of the Foot Clan has more in common with the first NES title. The stages are flat affairs with simple platforming and the emphasis is on getting through the stages are quickly as possible, not necessarily on killing all the foot soldiers that came your way. The difficulty is greatly scaled down from the NES title, which is nice, and the enemy spam doesn't feel anywhere near as bad, but this title still somehow feels like a half-step back after playing through all the Arcade-style titles the come out in the series.

In part that's because there just isn't that much imagination here in Fall of the Foot Clan. The stages are pretty basic, ranging from simple city streets (without any buildings), to caves, a river, more caves, and the Technodrome (which sort of resembles a cave). In those stages you'll battle a lot of Foot Soldiers and little flying copters. Each stage tries to throw in one enemy type to change things up, whether it's killer fish or Roadkill Rodneys, but expect to kill lots and lots of Foot Soldiers and copters, all of whom look and act the same in every single stage. It gets a tad monotonous after a while.

I do recognize that the Arcade titles also had a ton of Foot to kill, but those games benefited from a variety of Foot types. The basic purple guys were supplemented by White ninjas with swords, orange guys that would throw boomerangs, green dudes with spears, and so on and so on. Each of those games had a crap ton of different ninjas helping to make the waves feel complex and interesting. Here, though, there's one type of foot and he'll jump in at you before walking back and forth across the screen. Rinse and repeat that for five stages. 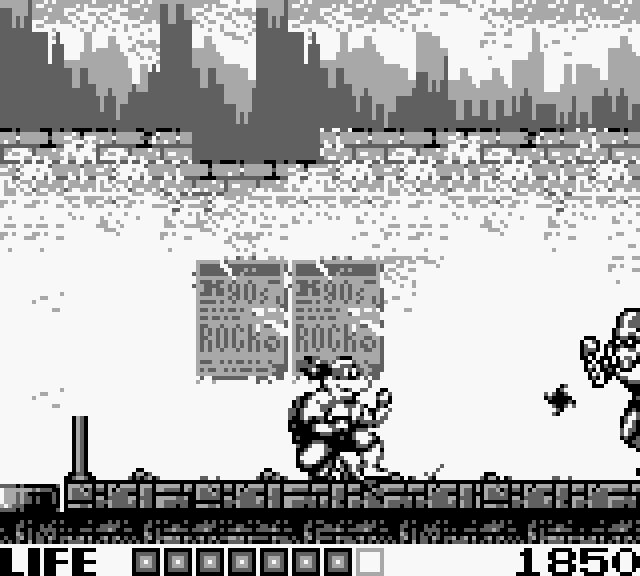 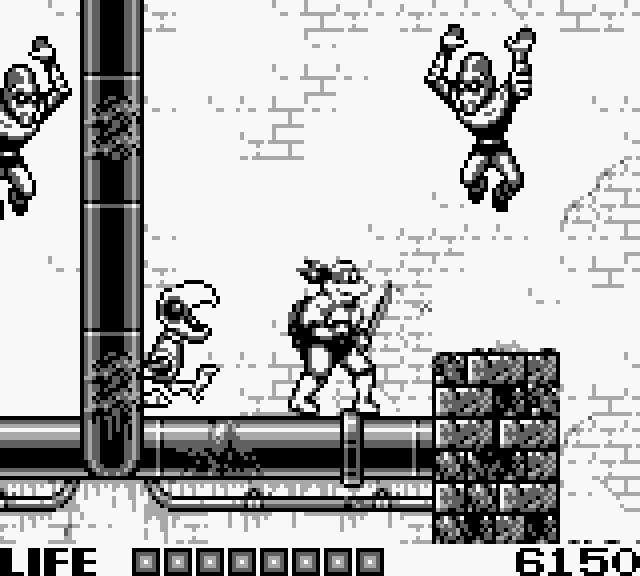 I think the programmers realized how repetitive the game could get because they did try to change up the game play a bit. In the various stages were bonus games where you could do various activities -- guess a number, shoot at targets, try to screw off Krang (for some reason) -- and if you succeeded you got a refill of your energy. Trying to find these areas could add some diversity and challenge, but most players probably didn't care about them. While different the bonus games mostly just served to drag the game out, ruining the flow of the action.

One thing I did like was that the programmers of the game at least made the bosses manageable. While the foes in the Arcade titles were designed to kill you, a lot, here the goal isn't to steal quarters but just keep the kiddies entertained. Thus, the bosses are positively easy to take out. Maybe too easy as most of them were kittens, easily bested without breaking a sweat. Still, if it's this or a brutal gauntlet from each boss, I'll take this every time.

Of course, part of the reason the bosses might have been so easy is because the game only has four lives for the players, one for each turtle. Lose all four turtles and it's game over, back to start. That's a bit rough, sure, but there's so much pizza in the game, so many ways to regain health, that it's really not all that bad. Fall of the Foot Clan is probably one of the easiest titles in the series, but for a simple portable adventure I don't think that's a bad thing. It keeps the challenge manageable, the game beatable, and everything feels fair (if not generous).

I will credit the game, though, that it does a better job of representing the 1987 cartoon style than the original NES game managed. The Turtles actually look like themselves, as the the various bosses, from Rocksteady to Bebop, Baxter Stockman (in his fly form), and of course Shredder and Krang. Plus, while the music has to filter through the cruddy Game Boy sound chip (which has it's charms even if it's not very good in general), it still does a decent job of feeling of-a-piece with the solid music from the better, Arcade-style games. The game may be simplistic for a TMNT title, but at least it does feel like a TMNT title. 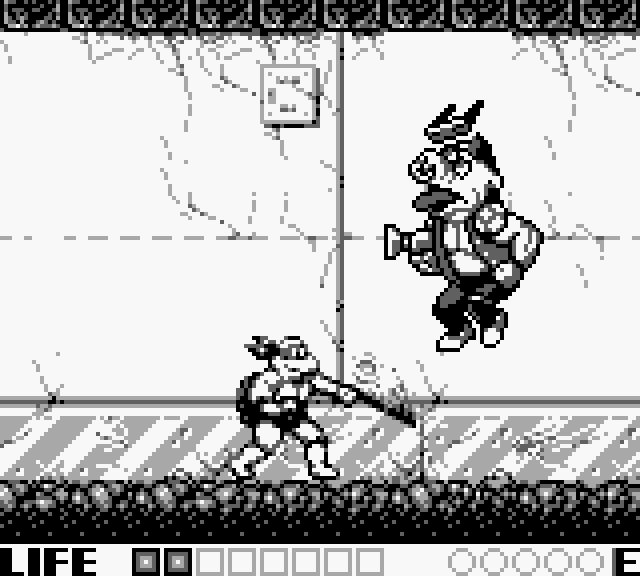 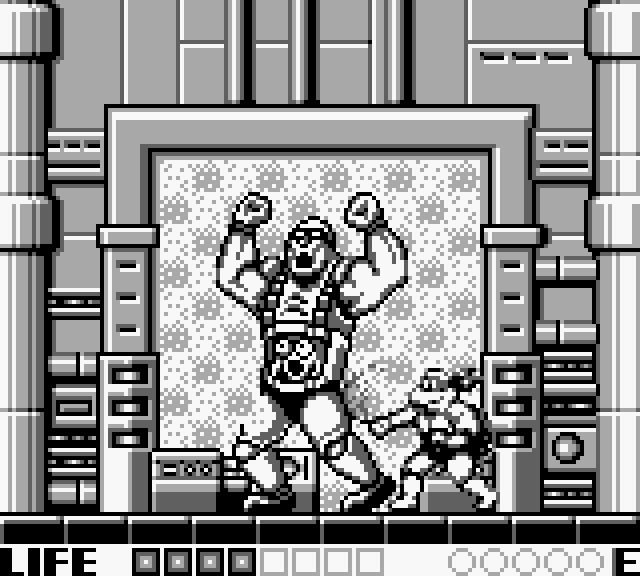 The biggest issue is that with the lackluster stages, the rather tedious bonus games, and the simplistic bosses, the game itself isn't really worth replaying over and over. At it's best it's a middling TMNT adventure, one where the enemies are constant but the challenge isn't too high. At it's worst, though, it's a repetitive slog where it feels like the only thing you have more to look forward to is more of the same in the next stage. Very little changes, everything feels the same from one level to the next, and then at some point it ends. No mater how good it might look and sound (for a Game Boy game), it's still not that great a game.

That said, this is the first TMNT title, one that came out fairly early in the life of the system. It's about as simple as other games of the era (like Super Mario Land or Kirby's Dream Land) and plays about as well as can be expected for the limited hardware. Sure, I would have liked to see better, but at least it's not as bad as the original NES title, and that's not nothing.