It's Pizza Time, Once Again

Gamers that grew up in the 1980s and 1990s have a few games they will always point to as seminal classics. There are of course the Pac-Man titles, Centipede shooters, the Donkey KongCreated as the titular villainous ape for his first game, Donkey Kong, along with the whole Kong family, has gone on to have a ling and varied career in a variety of Nintendo games. adventures. But there is no denying that the two Teenage Mutant Ninja TurtlesOriginally dreamed up as a parody of Marvel's Daredevil comics (going so far as to basically reproduce to opening shots of that comic's hero gaining his powers), the Teenage Mutant Ninja Turtles not only launched a sudden boom of anthropomorphic fighting animal comics but have, themselves, starred in multiple comics series, TV shows, and movies. arcade games (and their home sequels and expansions) rank among the greatest releases of the generation. These are games that, even now, see interest and activity, drawing new fans in year after year. 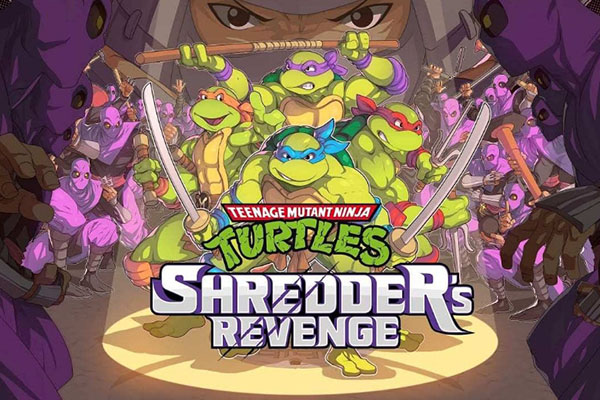 Its really no surprise, then, that there would be interest in a legacy sequel to those classic Turtles adventures. While Konami lost the license to develop new TMNT games right around the time the Super Nintendo Entertainment System reached its sunset, the concepts created in those games could be carried on. That's the idea behind Teenage Mutant Ninja Turtle's Shredder's Revenge, the 2022 release developed by Tribute Games and published by Dotemu, which functions as a sequel to the mechanics of those past Konami creations while doing just enough to modernize and update the games to the current era.

Tribute has some legacy working in the beat-em-up genre. Formed by employees from Ubisoft Montreal, these staffers had previously worked on both TMNT for the GBA and Scott Pilgrim vs. the World, two classics of the genre. Since 2010 the team had been pitching Nintendo on creating a new entry in the classic arcade series, but it took a decade for Nickelodeon to swing around to the idea. Working with Dotemu, they brought in Tribute and the collaboration was born. The idea was to create a true throwback sequel with modern elements, something that felt like the old Konami games (although changed just enough to avoid copyright issues), to give fans that next great TMNT game they'd craved ever since console had left the pixel era.

To that end, Shredder's Revenge does feel like a perfect, proper continuation of those classic games, right down to the pixelated graphics. The graphics are clearly inspired not only by the Konami games but the old, 1980s Teenage Mutant Ninja Turtles cartoon (where in fairness, Konami drew much of the artwork for their own games). Everything is presented in rich, lush, pixelated graphics, looking and feeling like a game that could have come out in Arcades, or on the SNES, in the 1990s. As far as nailing the vibe of the game, Tribute did it right.

One major upgrade this game makes over the classic games, though, is that it opens up for even more players. The game allows for six character multiplayer, something the arcades never managed (not in a TMNT game). To allow for that, the game includes two extra playable characters beyond the standard four Turtles: April and Master Splinter (there is also Casey Jones, unlockable once you finish the game, but sill only six playable slots at once). Each character controls in a similar manner -- punches, jumps, super moves, dash tackles, slides, and so forth -- but they each have different stats, and their moves feel just different enough in practice to keep things lively and interesting as you play through the game with each character. 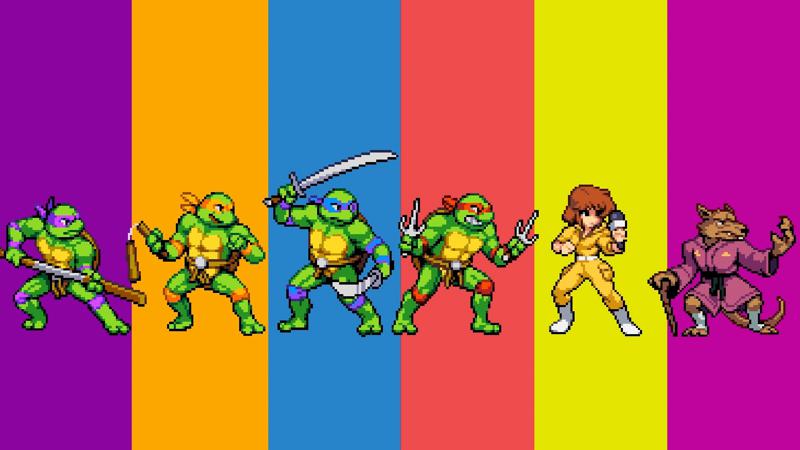 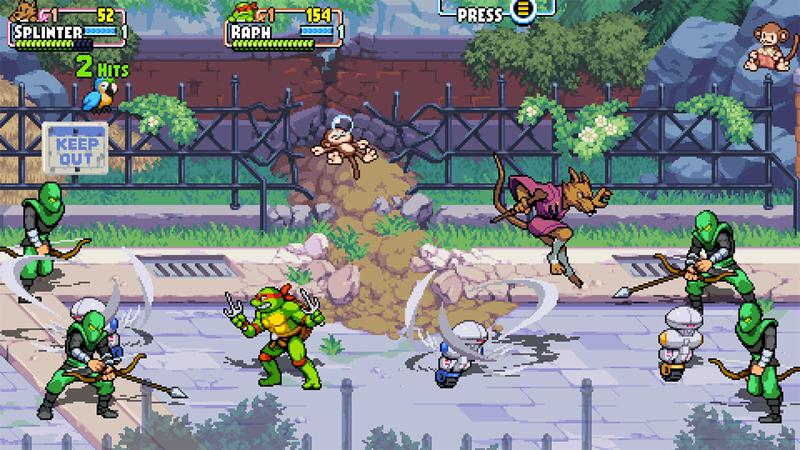 What also helps is that each character has a lot of personality. The various characters move around and feel different in their style, from Mikey who has a big, goofy run (instead of the ninja run the other Turtles perform), to April's mic-drop finishing move at the end of the stage. There is a ton of personality with the heroes, along with the enemies, making this feel like the cartoon brought to life in grand, pixelated fashion.

The game also brought in the classic voice actors for the heroes. Its great to hear Rob Paulson and Townsend Coleman's original voices for the Turtles once more, and that too helps the game bring out its connection to the classic cartoon series. That said, there really isn't a ton of voice work in the game so, for the heroes, you're going to hear the same lines over and over and over again. This was a trait of the classic games, too, but it would have been nice if one of the "modern" touches for this game would have been expanded voice work so things didn't get repetitive.

As far as the actual game play, the title is silky smooth. This is an easy pick-up-and-play game that you can button mash to your heart's content. You can pause the game at any time to see what moves your heroes can perform, but honestly most of it feels natural. It's easy to simply figure out all the basic mechanics as you beat up on the Foot, and the early stages of the game (whether in story mode or arcade mode) are easy enough to let you settle in and find your groove. It honestly felt like picking up one of the old school games, getting right back into the flow as if the last 25-plus years hadn't happened.

The game's greatest flaw, honestly, is that its simply so short. It's not short by the standards of a beat-em-up, mind you, presenting over an hour of solid game play across 16 stages (which is still more than any of the classic arcade games provided). At the same time, it's so easy to get lost in the game that you wish there was more to it. It's only a twenty buck adventure (new on the various gaming platforms) so bitching about the length feels odd, but I really wanted there to be a second adventure, another story in a different plot, where you could play through and battle along with the Turtles. Even just a remixed version with the same bosses in a few new stages would have made this package feel really interesting and appealing. 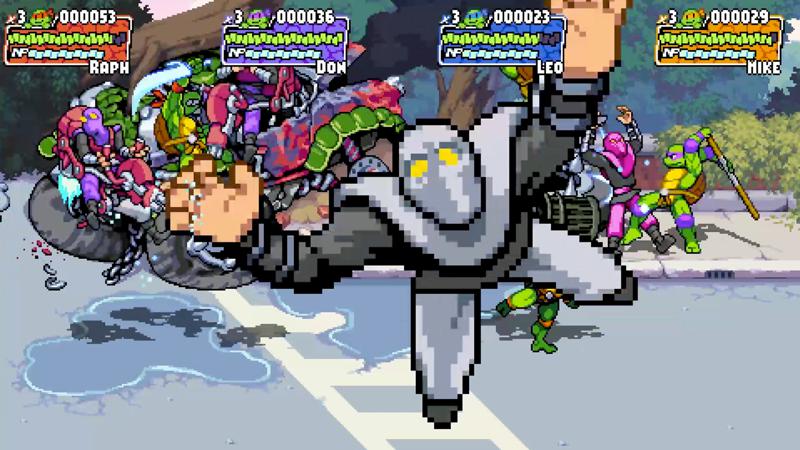 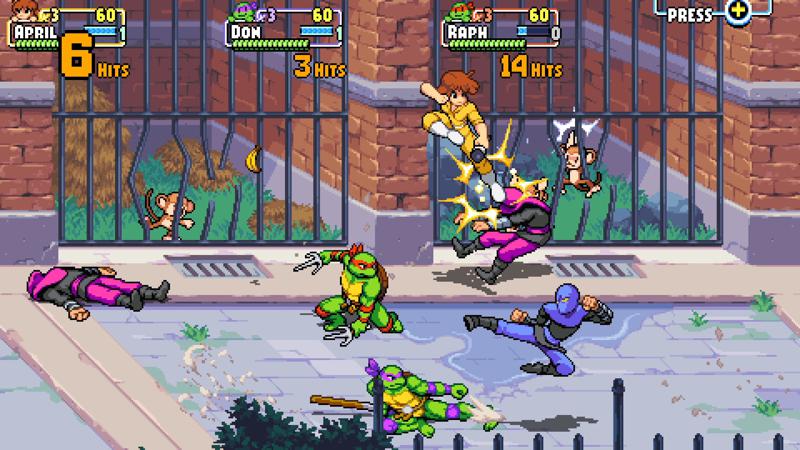 I suppose my wanting to play through a whole second round of the game really speaks to the high quality of the game. I played through as April in Story Mode, and then took Donnie through the Arcade version (and tinkered with the other heroes for just a little bit) so I could experience all the game had to offer, and it was great. It's high praise to say I wanted even more but I really did. There's enough here to satisfy, but I wanted even more. I could play more of this grand adventure and still not feel like I'd gotten enough.

I really could come up with a whole wish list of features I'd love to see in a DLC or sequel: a second story, extra playable characters (like the four Frogs), throw-back NES-style graphics (that you could just turn on and off in the options menu on the fly), and the like would all add a ton of depth to the package. This is a great game but what stood out to me once I had gone through the game twice were all the little things I'd want added to this to make it even better. Again, that speaks not to the high quality of the title already, which is great, but all the things fans would love in a legacy sequel. Expanding this game out and making it even better would really add to this package and turn it into all it could be.

Make no mistake, for fans of the classic games Teenage Mutant Ninja Turtles: Shredder's Revenge is the legacy sequel you've been craving. At only twenty bucks it's well worth the pick up and it will provide your money's worth and then some. But it won't be enough because you'll want even more. Hopefully this game is successful enough that Tribute is give the reins to not only expand this package but also make a sequel. Clearly I'll be there for all they give us, and more.