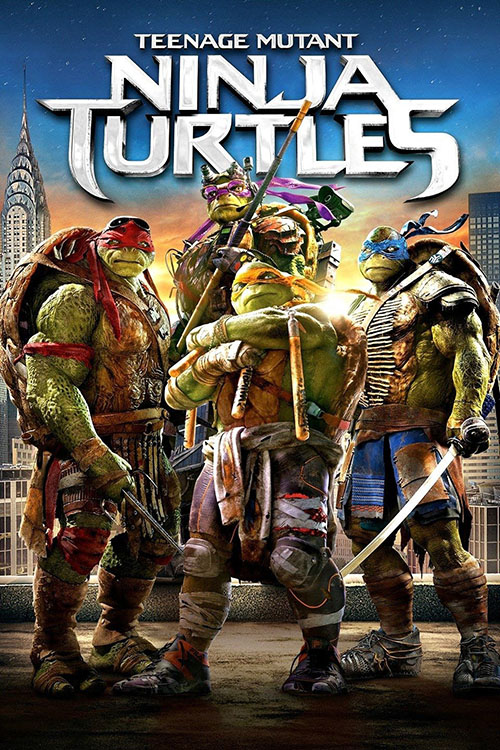 I still plan to review one more failed blockbuster (Warm Bodies, which actually did pretty well in box office and among reviewers, and yet still seems to be largely ignored by the populace as a whole), but today I get to nerd-rage at Michael Bay.

See, I didn't care much when the Transformers movies came out, and Michael Bay slowly and methodically took the largest, most explosive, over-the-top shit all over them (and, from the looks of the fourth movie, is continuing to do so, despite all the protests of the fans). To be honest, I never cared much about Transformers in any of it's forms -- it's vehicles that also turn into robots, and then,,, action and drama and stuff. It could be a cool concept, but it always felt horribly '80s, and I already had one horribly '80s obsessions: Teenage Mutant Ninja Turtles.

Not that my fandom of TMNT has been well met by the caretakers of the franchise, either. I liked the first film adaptation, 1990's Teenage Mutant Ninja Turtles, which I wanted to see because I watched the (now, in hindsight, horribly stupid) cartoon show. The cartoon and movie got me into the original Mirage comics, and it was those comics that actually cemented my fandom.

It never felt like the movies or the shows were able to adapt what I liked about the comics (decent dialogue and good action) and meld them into something I could watch regularly. While the first film was decent (and did a pretty okay job of adapting the original storylines into something actually watchable on the big screen), the sequels were increasingly bad.

TMNT II: Secret of the Ooze was hammy and dumb, and no one has ever been able to explain to me how ooze that is supposed to mutate turtles and a rat into hyper-intelligent man-sized beasts was able to turn Shredder into a slightly larger Shredder (with extra blades, no less) and not some 30-foot-tall man with rinky-dink tiny blades (since it's not like inorganic matter was ever effected by the ooze). I know it looked good on screen, but that's not how ooze worked! (especially if you use the cartoon logic, and any human exposed to ooze mutates into a humanoid version of the last animal they were in contact with which, for Shredder, would have been turtles -- how ironic would that have been?)

Of course, nothing could be as bad as TMNT III (often referred to as Turtles in Time, which was the game that came out around the same time "inspired" by the movie but thankfully taking no elements from it). The plot of TMNT3 (the turtles are whisked away to ancient Japan where they have to stop the smallest case of US imperialism ever) it pretty loose and horribly slow and even the return of my favorite character from the movies, Casey Jones, couldn't save the story, pacing, or anything else about the flick. It's just so, so bad (one day I'll find the old review I wrote for it and post that here).

One TV, aside from the (totally for children) 1980s cartoon, fans of the turtles were subjected to a horrifying "sequel" series from Saban, the makers of the Mighty Morphin Power Rangers (among other terrible shows). Their live action show, Ninja Turtles, was so bad that until very recently it didn't even exist on DVD (and I know not a single fan, myself included, that willing bought the DVD when it came out).

A later cartoon in Fox Kids, (another creatively titled) Teenage Mutant Ninja Turtles reboots the cartoon universe, giving us a different take on the turtles, Shredder, and all the weird alien mythology that eventually came of it (Shredder was both a man and then an alien, and I think eventually a computer virus, but still always sort of Shredder?). The cartoon wasn't bad, per se, but considering the fact that it came out when most fans of the original cartoon (and comics) were adults, it completely missed the mark is making something all fans would love. Obviously gear for the kids in "Fox Kids", the show was too simplistic, poorly written, and just not worth watching unless you were 8.

I will say, though, that the 2000's cartoon went out with a good bang. The final movie in the run, Turtles Forever unified all the previous mythology into a single multi-verse and had the 2000's cartoon crossover with the '80s cartoon (and all the weird logic that universe contained). It was the first time the 2000s cartoon showed that it knew its actual audience, and it was the first time I actually paid attention to the series past its first season.

Things were only on the up from there. the fourth movie, the CGI TMNT actually served as a sequel to the first three movies. While it had its flaws (April O'Neil suddenly becomes a ninja badass with no real explanation about how, Michaelangelo is relegated to comedy relief losing any semblance of intelligence) the movie was surprisingly good and (like Turtles Forever) actually treated the adults int he audience like they deserved to be there with the kiddies (in fact, from what i saw in the showings I went to, it was the adults, not the kids, that enjoyed the movie).

And from what I've seen so far, the new cartoon on Nickelodeon (once again called Teenage Mutant Ninja Turtles) has one eye on the past while trying to make a show kids will love just as much as adults. The writing it pretty good, and the CGI is actually great for a weekly show. Plus, there are nice little touched (like the ring of one of the turtle's communicators is the old arcade game jingle).

All of that to say that the TMNT property may have been in the weeds for a while, it was generally being handled much better as of late. A new movie should inspire me with hope (even if Michael Bay is involved), but from what I've seen so far in the trailer (teaser trailer, admittedly), there isn't much to like.

It's a Michael Bay film, so obviously it's light on plot and heavy on explooooooosions. There's a fair bit of over-wrought narration (which could all come from one scene and may not be indicative of the whole movie), and a quick reveal of the Shredder armor (not sure if Shredder was in it, or who will be playing Shred head, although I have a bad feeling it'll be white-washed as so many Hollywood films are now).

But man, the worst part is the way the Turtles look. They're just so... bad. It's like someone on the CGI team saw the old Mutations figures (with their overly large upper bodies and weird, smushed in faces) and thought "that's how the Turtles should look!" If that's the case, they nailed it, but no one else is going to think it was a good look to go for.

I mean, I'll save my thoughts for when the movie comes out (I try to give every flick a fair shake, Bay-splosions or no -- after all, I did like the universally reviled Bay flick, The Island), but right now, as a fan of the Turtles, it's hard to hope.