A Less Than Excellent Adventure

It's interesting go back through the original three Teenage Mutant Ninja TurtlesOriginally dreamed up as a parody of Marvel's Daredevil comics (going so far as to basically reproduce to opening shots of that comic's hero gaining his powers), the Teenage Mutant Ninja Turtles not only launched a sudden boom of anthropomorphic fighting animal comics but have, themselves, starred in multiple comics series, TV shows, and movies. films in quick order, watching them within a short span so see the evolution. As a child back in thee early 1990s, this third film, Teenage Mutant Ninja Turtles III (which I always give the subtitle of "Turtles in Time" in my head even though that was attached to the second arcade game, not the film) was a disappointment (the vaguely related video game was much better). Even though I was only 12 when this movie came out, I felt like a film critic, tearing it apart on the ride home from the theater. It sucked. 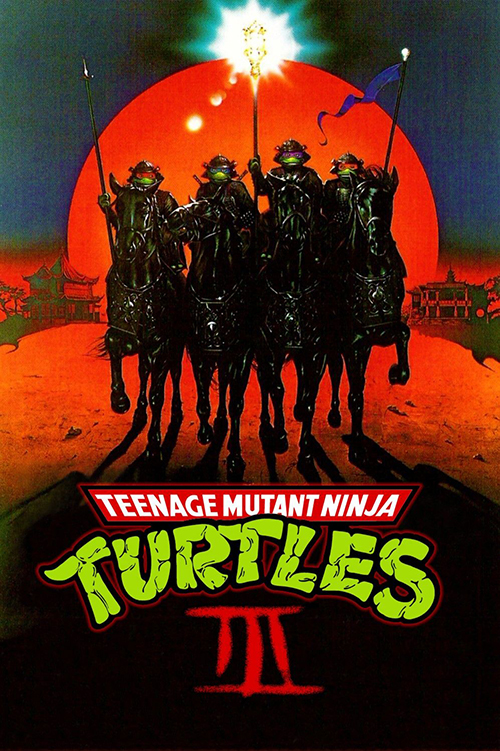 But going back and watching it now I have to admit I'm not entirely certain what I was expecting. I mean, the second film, The Secret of the Ooze, was utter crap so how could 12-year-old me have a high bar for its sequel? Did I just want more of the original Teenage Mutant Ninja Turtles, for the studio to go back and say, "why, that sequel that actually managed to make decent bank? Yeah, we were wrong to make it." That's silly. The studio had a hit, recalibrated to please family groups, and had another hit. They were going to keep making films that worked.

And really, my assessment back in the day was overly harsh; while this film isn't great, it's not nearly as bad as I remembered. Tonally it's actually ride somewhere between the first and second movies in tone and style. It's not quite as silly as the second film, and it even lets the Turtles use their own weapons (as opposed to them using toys, props, or whatever else the producers could come up with). At the same time it doesn't quite have the iconic hook of Turtles v. Shredder that powered the first film. It's a bit bland, a bit tired, a bit too long. In general it's exactly what you'd expect from a three-quel of a family movie.

The movie opens with the Turtles -- Brian Tochi as Leonardo, Corey Feldman as Donatello, Tim Kelleher as Raphael, Robbie Rist as Michelangelo, along with James Murray as Splinter -- hanging out in the train station sewer den. April (Paige Turco) comes for a visit, having just been to a flea market where she found some interesting things for the guys. One of those items, and ancient Japanese relic that, for some reason, was at this dirt market, was a trinket she picked up for Splinter. But before she can pass it off it lights up, shooting out sparks and lightning. Suddenly she's warped away and, in her place (and in her clothes) appears Kenshin (Henry Hayashi), a feudal Japanese warrior. The Turtles want to know what happened, while Kenshin just wants to get home.

It's not just a matter of accidental time travel; Kenshin's father, Lord Norinaga (Sab Shimono), is at war with a rebel upstart town and Kenshin wants to get back quickly so he can help the villagers, in no small part because the rebel leader, Mitsu (Vivian Wu), is the lady Kenshin adores. The Turtles, meanwhile, want to get April back, so, after getting Casey Jones (Elias Koteas) to guard Splinter in the present, the boys warp themselves back into the middle of the conflict where they do their thing, grab April, and try to find a way back home again. 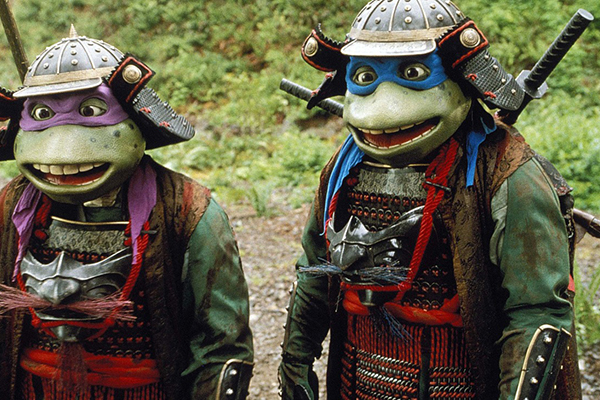 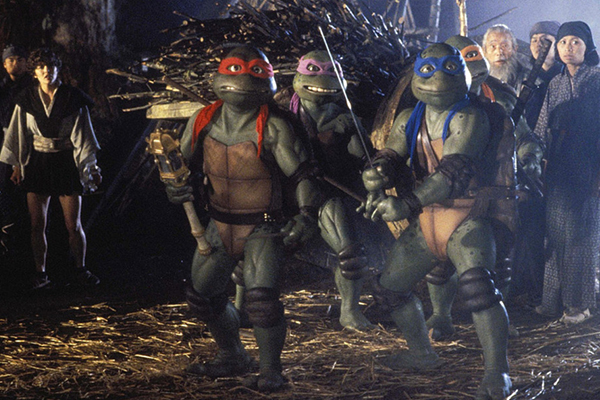 From a certain angle I can kind of get what the film was trying for. Firstly, after two films featuring the Shredder the producers basically had to try something new. Bringing ol' metal head back from the dead again would have been a bridge too far, to be sure, and as we saw in that sequel his storyline was beyond played out. Sending the heroes back in time, which is an interesting, hooky sci-fi premise, forces the heroes into a new situation they haven't seen before. The storytelling possibilities are endless, right?

Unfortunately, once the guys are sent back in the time the film really doesn't know what to do with them. The whole of the story revolves around a war between factions, but said "war" is hardly a skirmish at all: it's one tiny fort and a single village that refuses to pay their taxes or something. That's not a war, it's hardly even a battle, rating a pissing match at best. The movie tries to sell it as this huge conflict for the ages by telling us how bad Norinaga is, making him glower while the villagers are all nice, sweet people, but it never really backs any of this up. The few battles we see make it look more like a family conflict than anything epic.

This is a major issue because the whole of the last act is tied up in resolving this war. It's needs a big, climactic battle to build to, something to give us the major release of the story, and yet there just isn't anything here at all. Instead of building to a grand finale, the movie peters out in the last act, losing all steam and momentum, to the point where even the kids in the audience (like my 12-year-old self) just start tuning out altogether.

It's a pity because the first two acts of the film aren't bad, actually. They're not great, with silly one liners and hammy acting, but I'd put it on par with the first film in tone and style. It doesn't insult us by overly kiddifying everything, unlike the second movie, and it has more than a few jokes that are aimed straight at the adults in the audience. It has a good, easy going vibe to it, funny and amusing without taking too long to get anywhere, but then that third act rolls around and the film falls apart entirely. 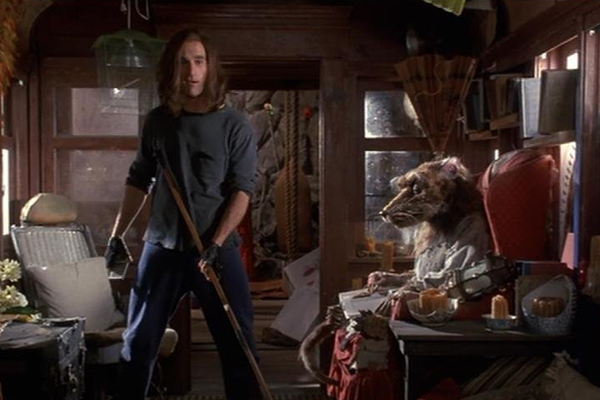 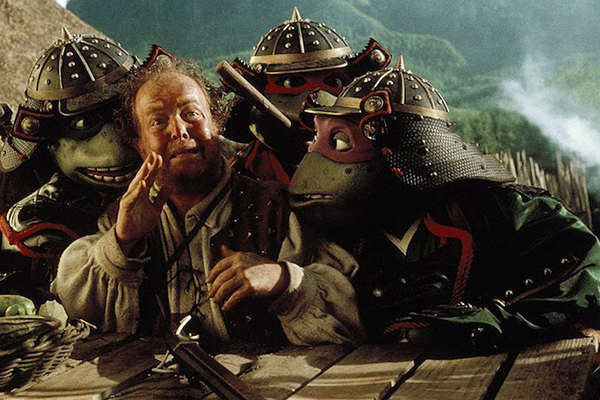 The weird thing is that the film has an opportunity for something truly interesting it could have done with the story. The guys went to feudal Japan so they could have gotten involved in the middle of a conflict involving the Foot Clan. They were right there at a time what that clan could be bee forming. While shoving Shredder (or a Shredder stand-in) into the movie would have been silly, they could have easily worked in reference to the Turtles' own past and built it as a culmination of their three-movie arc. That would have made great use of sending the guys back into the past while also paying of all their story beats over the years. Instead we just get a silly, bad little story that would have been right at home in a TMNT cartoon.

In fact, when you think about it, this film has the cinematic style and storytelling of an episode of TV. It doesn't try very hard, keeps everything tight and on a budget, and sets the guys right back where they were when the film started. It could have been the season finale for a show and would have fit in perfectly, but material for the Silver Screen this is not. The film is enjoyable at times, and mildly fun, but it all just dies a sad and tedious death before the credits even roll. While I think it's probably a good thing at this point the live-action films didn't produce another direct sequel, I have to think the Turtles deserved better. Thankfully, a few years later, we'd get a much better sequel from a different studio...