Franchises never die. The Teenage Mutant Ninja TurtlesOriginally dreamed up as a parody of Marvel's Daredevil comics (going so far as to basically reproduce to opening shots of that comic's hero gaining his powers), the Teenage Mutant Ninja Turtles not only launched a sudden boom of anthropomorphic fighting animal comics but have, themselves, starred in multiple comics series, TV shows, and movies. were a fixture for kids throughout the 1980s and 1990s, with both their cartoon series on the small screen and live-action films on the big screen. The cartoon ended in 1995, though, with the films wrapping up two years earlier via the little loved third movie, and the live-action TV show, The Next Mutation we generally hated by everyone, including the less-judgmental kids who, at that time, we watching to pretty wretched Power Rangers and Beetleborgs. 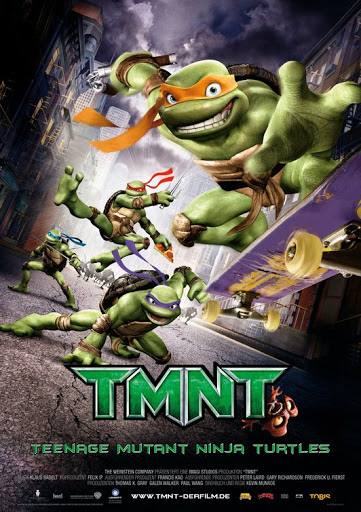 While the Turtles did eventually come back on the small screen with the 2003 cartoon series (which did run until 2010), the prospects for the TMNT on the small screen seemed dim. But by 2007, Warner Bros. (which owned New Line, original co-production studio on the three live-action films) decided to flex their license on the Turtles one more time and put out an animated film loosely connected to the original. Fans of the series hopes this would be the start of a new series of films, but for whatever reason Warners decided to not continue the franchise (this despite the film making almost three times its production budget at the Box Office, $95.6 Mil on $34) leaving this as a curious one-off.

Honestly, I'm not certain what the WB was expecting. The previous Turtles films hadn't been stellar money-makers either, with only the first film really performing massively at the Box Office, making north of $200 Mil right at the height of TMNT popularity. In the years since the Turtles' star had waned, and the third film only made $50 Mil. In comparison to that, nearly $100 Mil was solid dough and right in line with the age and viability of the franchise. Yes, the series had its fans, and adults still remember their beloved franchise fondly, but there's only so high for the series to go, especially in an animated film with a semi-decent story and very little appeal outside its niche audience. Perhaps the WB should have lowered their expectations just a bit.

The movie is, honestly, only so-so as far as story and style are concerned. I liked it when it came out, mostly because my beloved Turtles were finally back in the big screen, but going back and watching it now I do have to admit the film is... not great. Fun, yes, but slow and kind of shaggy, trying to be both a continuation of the three live-action films that came before (if only loosely) and an origin story for the brothers as well. It serves a few too many masters on this front, reintroducing the heroes, the Foot, their leader Karai, and a new "villain", without focusing on anything long enough for it to stick. The film certainly has its moments, and due to the fact that it's animated it can get away with a number of elaborate action set-pieces the live-action films couldn't, but on the whole the film feels slightly less than the sum of its parts.

We open with April (voiced by Sarah Michelle Gellar) in South America, working as an antiquities collector (I guess as an extension of her old-life running her father's junk shop). She's finding these artifacts for the rich collector Max Winters (Patrick Stewart) who has his own reasons for wanting them. While she's down there, though, she also runs across Leonardo (James Arnold Taylor) who was sent out into the world to train to be a better leader (for some reason) and just never came home. She convinces him, eventually, to return home, and everyone, via their own means, heads back to New York. 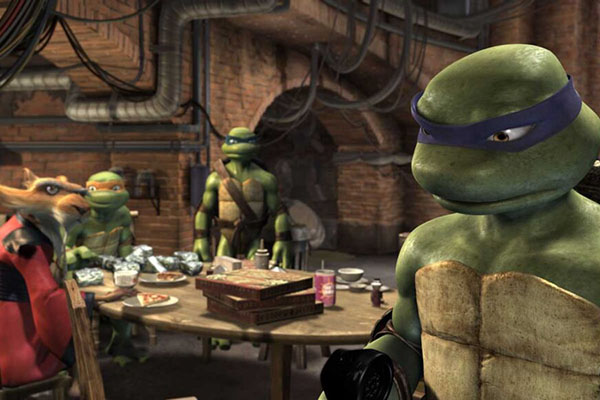 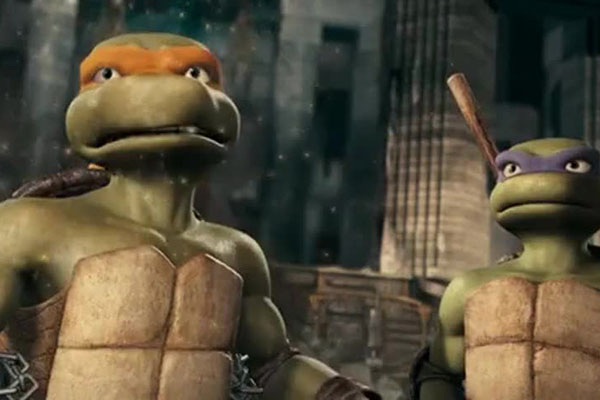 Leo comes back home to find Donnie (Mitchell Whitfield) working as a tech support call center agent, Mikey (Mikey Kelley) working as a party entertainer, and Raph (Nolan North) being generally surly and not contributing. In secret Raph is actually working as the vigilante "the Nightwatcher", a fact only Raph's friend (and April's boyfriend) Casey Jones (Chris Evans) knows. But with Leo back, Splinter (Mako Iwamatsu) tells the boys to all start training together so they can work as a team again. Most of them agree, but Raph, hot head that he is, charges off and gets the rest of the team into trouble.

Meanwhile, Winters gets all his artifacts lined up and we learn the real truth: he's an immortal who once tried to take over the world via the power of a magical portal. The portal gave him eternal life, yes, but at a cost: it turned his four best friends to stone while also unleashing three powerful, immortal monsters on the world. For the next few centuries Winters worked to finds his friends and collect the evil monsters, and via magic he manages to bring his friends back to life (if still technically made of stone). He needs their help (and, for some reason, the help of the Foot Clan who he has hired) to collect the last few monsters so he can send them all home and end their immortality. His friends balk, though, finally being alive and wanting to stay that way, which leads to a conflict between Winters, the Turtles, the Foot, and all the monsters for the fate of the city.

Yeah, trying to explain the plot of this movie highlights a big issue: it's a mess of a film. There are so many plot beats going on, so many things jumbled in together, that none of it really lands. We have the story between the four Turtles which, due to the constraints of an 87 minute movie, boils down to a couple of angry exchanges between Raph and Leo, with barely any character development given to Donnie or Mikey. There's also the relationship story between April and Casey that could have fueled a strong plot line, but the characters basically only show up in three scenes and whatever conflict they have is resolved like its nothing. All the heroes, in essence, are short changed.

They fare better than the villains, though, who are totally under served by the film. Winters is a barely-developed character whose motivation is hidden until the mid-point of the film when he finally explains his plan to his so-called friends. While we get a lengthy introduction to Winters at the start of the film, and then a retelling of this same story again later in the movie (adding unnecessary padding to an already short film), we never really get to know the character since the movie tries to cast him as an inscrutable villain before revealing he's a hero all along. The true villains are his friends but they aren't revealed as such until basically the halfway point and, by then, it's already too late to learn anything about them. The end up characters defined by how they look but none of them have any personality or history for us to latch onto. They're stony voids, in essence, which makes for a terrible collection of villains. 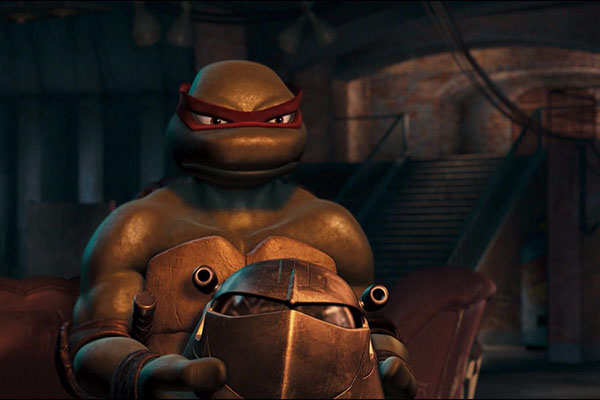 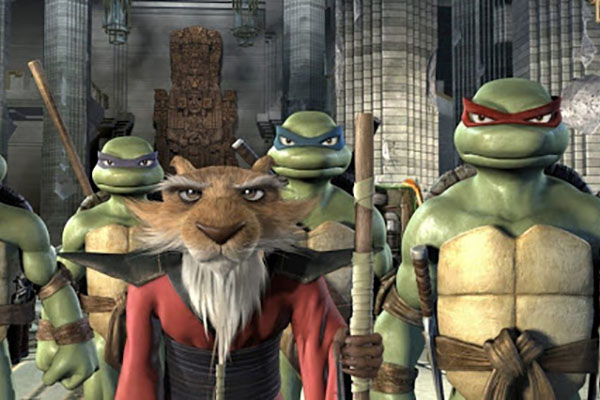 Then there's the foot who were included in this film because, I guess, we needed to sell more toys. Karai (Zhang Ziyi), new leader of the Foot (and, if you know anything about the story from comics and other media, Shredder's daughter), is an interesting and amusing character who doesn't get enough screen time. There's the promise that she'd show up in future films (movies, of course, that never happen), but it feels like Karai and the Foot are here mostly because all the present-day set films have had the Foot; they're iconic and kids (and adults) expected to see them, so they had to be shoehorned in. But, in all reality, they add nothing to the film and could have been excised to give the rest of the characters more room to breathe.

The story presented by the film, when all is said and done, doesn't amount to much at all and is more tedious than enjoyable. It sucks, too, because there are great character moments in the film. The sequences between Leo and Raph as they hash out their brotherly anger land well and develop these characters more than anyone else in the film. Meanwhile Casey gets to lament the fact that he's struggling in his relationship with April and wants to be the man she expects, which adds some needed nuance, and emotional growth, to the character. I wish we'd gotten more of this, more time to let these characters breathe and grow, because these were the most engaging parts of the film.

I also enjoyed the animation for what it did. It hasn't aged as well as Pixar's strong efforts, looking a little too blurry, lacking as much detail as even the 2012 Nickelodeon series, but for the time the style of the animation, and the fun that was clearly had with it, does work well enough, Heck, they have a fight sequence set, convincingly, in the rain that had to be an absolute bitch to program, so the animation team gets kudos for that at a minimum.

Still, on the whole this film feels like more of a misfire than a success. It had solid moments, and some decent action, but it doesn't quite pull it all together like it should have, The film really needs another 30 minutes or so in the runtime to really gel together, to let the characters all develop and justify their inclusion in the film. At 87 minutes the film is too slight, too jam-packed, forced to burn through plot points to get to the action at the end. That doesn't make it a bad movie -- it's certainly still better than the second or third live-action movies -- but it can't really reach the height the Turtles should reach. For an attempt at reviving the TMNT this film needed to do better. Warners might have hope this film would kickstart a new series but, looking at it now, the studio should have known better.

Or, at the very least, they should have tempered expectations and give the series time to breathe in a second film instead of just canning it after one attempt. There are the bones of a solid series here, but this really does feel like a rough pilot. Fans of the series just had to lament what could have been since the films to come next would be so much worse...