The New TMNT (No, the Other One) 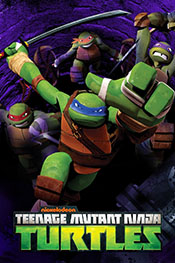 I've contemplated for a little while writing about the new Teenage Mutant Ninja Turtle series on Nickelodeon. The only reason I haven't is simply because it would just be a lot of gushing about how good the show is and telling you guys to watch it.

It's amazing and you should watch it. Unlike previous TV shows, it doesn't talk down to its audience nor does it ignore the adult TMNT fans (those of us that have been with the turtles since the beginning). It's a fun show with a good amount of nods to the TMNT productions that have come before (comics, shows, movies, games...) and is worth it for fans new and old. Go watch it now.

Gushing over, let's talk about the other new TMNT production that just came out: the absolutely wretched 2014 Paramount movie titled (like almost always) Teenage Mutant Ninja Turtles (very few TMNT products haven't featured the full name -- the live action show, Ninja Turtles: The Next Mutation, the 2007 movie called simply TMNT, and various video games related to it are all the spring to mind). Obviously I'm coming right out and starting the hate immediately by calling it "wretched", but there's very little to like about this movie.

So let's go with what it did right. Despite Michael Bay's best efforts (attempts that making them adult aliens instead of mutant turtles, which would have effectively killed the "Teenage Mutant Turtles" part of their name, were quickly buried under fan out-cries), the turtles are actually the best part of the movie. They're fun, they're silly (without pandering to kids), and they have the right amount of attitude (even if Mikey simply comes across as "the dumb one", which happens all to often). Sure, on paper the designs for the turtles look awful, but when they've moving and acting, the turtles look good enough that you don't notice the mangled makeover they received.

Splinter doesn't come out quite as good, though, since his new design is terrible. He's just such an ugly rat that I really didn't care what happened to him. Live, die, get eaten by mousers, who cares? He's still a decent character, and his attitude is right (so the voice actor did a good job), so it's not like he's a total loss...

No, that honor goes to everything else about the movie. Although the turtles get the least amount of screen time (much like how the Transformers movies are conspicuously barren of transformers for whole stretches of their flicks), they are the only part of the movie you should bother watching.

Let's start with the vapid elephant in the room: Megan Fox. Although an easy target since she plainly can't act normally and was simply hired for her looks (I'm not trying to be sexist -- I have not talked to a single person, male or female, that thinks Megan Fox was hired other than for the fact that she's considered hot and is often sleeping with Executive Producer Michael Bay), Megan provides absolutely no justification for her inclusion in this movie. Her character, April O'Neil, is there to explain how the turtles came into being and while she's somehow the pivotal character of the whole creation myth (she saves the baby turtles and the rat when the TCRI lab burns down), she's neither the scientist who created the mutagen (that would be her father) nor the person who burned down the lab -- she's just a dumb kid who happened to be there.

And then, after this whole line of coincidences all occur (which doesn't even touch upon the BIGGEST coincidence: the same girl who save the baby turtles year ago happens to also be the only person to see them the ONE time to go to the surface years later), April then becomes little more than a damsel in distress (all agency completely removed). The foot attack the sewer den and kidnap three of the turtles (leaving Splinter for dead even though they want mutagen from mutant blood and he's just there, unconscious and ready to be delivered), and at first it seem like April will be the only one to save Splinter... but hey, there's Raph, and he saves the day and then leads the charge to save his brothers.

This happens over and over in the second half. When April and Raph need to get to the villain's base, April calls a friend, Vern (a nod to the character from the 1989 cartoon) who has the Channel 6 news van. Vern drives them -- April just sits there.

When the turtles need to be saved from the giant test tubes they're caught in, April relies on a half-dead Donnie to give her the info she needs -- she's plainly to dumb to figure it out herself, and all she gets to do is push some buttons (which Vern could have done, since he was there too).

When they're all riding down a hill in the van with an avalanche nipping at their heels, it's the turtles that are diving in and out of the snow, fighting guys and saving the day. Vern gets to drive some more, while April just sits there (and occasionally almost falls out of the fan only to be saved by Vern of all people).

When April and Vern face off with the villain, Vern willingly puts himself in the line of fire (and gets shot) to save the day. Sure, April gets in the last shot to knock the villain unconscious, but she had to sneak up behind him because plainly she's a girl who couldn't fight him on her own (Vern gets the glory, naturally).

So plainly the new TMNT is not big on women's lib. That's fine -- most productions of the comic has been a sausage fest (especially if April's friend/co-worker Irma isn't introduced). Even if we accept that April will always be relegated to damsel status (which we shouldn't accept), there are still other issues with the movie.

For starters, Shredder is in this flick and he has such a non-presence in the film that I was able to go this long without talking about him. He's introduced as the sensei of the main villain, and that concept just blows my mind -- there's a TMNT film that includes Shredder in it and he's NOT the main villain. Sure, he's sort of the motivating factor for the whole plan -- as the sensei of the real villain, Mr. Sacks, what he wants done is done -- but most of the time he just stands around glowering or swearing revenge on the turtles (which makes no sense since he's never met them before), or he's walking around in the most ridiculous, unwieldy Shredder outfit ever committed to film (and that includes Super Shredder from TMNT II: The Secret of the Ooze). Seriously, Shredder looks less like a ninja and more like a Transformer had sex with a Swiss Army Knife.

And let's talk about the whole "ninja sensei thing". Shredder doesn't fight like a ninja. The armor her wears is so heavy it's obvious the stunt man couldn't really move in it -- whatever isn't CGI is just clunky punches and walking. And his whole team of ninjas, the Foot, aren't even ninjas in this movie -- they're more like Blackwater-inspired mercenaries. They fight with guns and explosives, not with fists, feet, and katana. It's like the producers (Michael Bay, more specifically) decided "ninjas are stupid -- why fight like a ninja when you can make things loud" and only kept the turtles as ninjas to appease the fans (which, seriously, he probably had to do).

Beyond ALL this, there's the biggest issue with the movie (a film just loaded down with issues at this point): the villain's plan. It basically makes no sense. Let's look at it point by point:

So yeah... this movie is a piece of shit. It's big, it's dumb, it's loud, it makes NO SENSE, and the only good thing about it are the wise-cracking turtles. But then, I guess I can see why it made oddles of money -- it's big, it's dumb, it's loud, and you don't have to think AT ALL which watching it (cause even using single brain-cell during the movie-watching experience completely pulls you out of the movie). It's perfect for American audiences.