Lifestyles of the Fabulously Awful

It's interesting discussing this show at the same time that I'm also reviewing the third season of Titans as, despite them being shows set in very different genres, these two feel very similar. Characters with daddy issues living fabulous lives far outside the reach of any real authority. People that think they're so much better than everyone around them, and, even if they don't mean to be casually cruel they end up doing it anyway. Consequence free existences that they continue to enjoy because of their fame, money, and power. And yet it's the show about awful rich people, and not awful rich superheroes, that comes out on top. 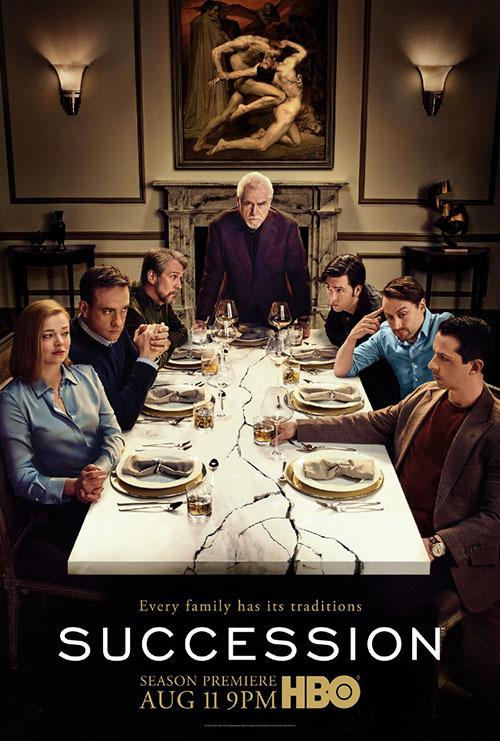 I honestly thought about discussing this show when the first season aired and doing a compare/contrast between this show and yet another show about the fabulously wealthy, Billions. I didn't at the time, though, because it just felt too real. Watching Succession two years ago and seeing the trials and tribulations of a rich media mogul and his toadying, self-pleasing, fuck-up children felt too much like watching the failure of our country that was the Trump Administration. At that time it was hard to stomach that show (by design, I'm sure) because it didn't feel like there was any kind of out from the madness of our existence. That, naturally, has changed, and the show changed with it.

Succession is about the Roy family -- father, and leader of the clan, Logan (Brian Cox), eldest son (and the least involved in the family business) Connor (Alan Ruck), second son (who is also a drugged-out coke-head) Kendall (Jeremy Strong), youngest son (and wildly over-the-top dickhead) Roman (Kieran Culkin), and daughter (who works outside the company as a media agent) Siobhan "Shiv" (Sarah Snook) -- dealing with the fallout for their family's business, Wayfare-Royco, after the father (and CEO) has a stroke at the start of the series. The sons jostle back and forth for power in the void left by their father, but Logan isn't ready to be put out to pasture and, as soon as he's able to stand, heads back to the office to assert dominance.

This then sets off a flurry of power-plays across season one that leads to Kendall trying (and failing) to lead a hostile takeover of the company and claim the CEO spot. When that fails, Ken (noticeably chastened) comes back into the folder to help his father try to beat back others looking to perform a leveraged buy-out via the stockholders. Meanwhile, details continue to emerge about a massive scandal within the cruise lines division of the company -- forced prostitution, as well as a number of deaths -- that could put a strain on the Roys ability to keep hold of their company. Senate hearings, and massive power plays, ensue.

On it's face there shouldn't be anything to actually like about Succession: it's a show about awful rich people being awful which, considering how much we saw of the Trumps (who are the obvious analogue for this fictional family), should come as no surprise. The first season, for all it's dramatic jostling and power-plays, really felt more like a catalogue for "lifestyles you'd love to have but could never afford". These people are awful but damn do they have the finest things in life, and I could see how people would tune in just to see what other fabulous things would get featured on the show. Thing is, though, that as the show was showing us all the glory of being rich it was also slowly building up its characters in interesting ways. Kendall is the son clearly set to be the next Logan, anointed and ready to go, but he also has no spine when it comes to his father. Oh, he can talk a good game when faced with anyone else, but he's the toadiest of toadies when face-to-face with dear old dad, and he regularly folds like a cheap suit. Roman, by contrast, it a brash and loud-mouthed jerk who, if he weren't rich, likely would have been sent away for being a sex offender. He has no filter and no self-control, but when played by Culkin he absolutely steals the show. And then there's Shiv who seems like she's the most honorable of the group (for a certain definition of "honorable") but when given a chance to get her own hands dirty she's right there in the much with the worst of them.

The drama of the show plays out by watching these people try, time and again, to wriggle out of the situation their in, but each season things get just a little bit worse. Watching these people dig themselves in deeper while they're oblivious to all that could be taken away is actually pretty fascinating to watch. You find yourself getting sucked in by their personalities, the ways they bounce off each other (as they're absolute dicks to one another) as they each try, often in vain, to gain approval of their father and rise to the top of their crumbling empire.

Dear old dad's approval is really what drives everyone. "Will he love me? Does he see how good I am? Will I get to wear the crown?" Being the anointed child is as close as Logan gets to actually giving praise, and all their naked ambition is plain to see. Hell, Logan sees it, but he clearly likes to see them bite and scratch and bloody each other. He's not a good person, instead being someone that prises power and station above all else. You only have his affection as long as you're useful to him and the second you screw up and make him look bad you're out of he inner circle. No gold star, no kiss from daddy.

Logan isn't really a complex character it's just that he keeps everything close to the vest. He'll watch everyone around him and make non committal grunts before going off and doing whatever thing he planned to do. That lack of openness is what keeps the kids jostling and he likes that because it means they're all focused on his approval. He remains the center of attention even when he isn't in the room as the whole world (their whole world, at least) revolves around dad. And when things do go his way, or one of the kids fucks up, he explodes and burns their whole world down. Then, finally, they know where he stands. What's clear to everyone (but them) is that he doesn't really love anyone other than himself, and he'll do everything he can to remain the true center of the world. It really was hard to watch this show back during its first season because this felt all to real. Trump, of course, is the center of his own world and even as his business was crumbling and his presidency went into the shitter he still kept refocusing the spotlight back on himself. Even now, out of power (which is a position Logan has yet to land in), Trump is desperate to try and find a way to move the spotlight back towards himself. And his kids -- his two idiot sons, his equally self-serving daughter, and that one kid that's so far out of the loop you never hear about her -- do everything they can to keep his approval aimed at them. It's no mistake that as Trump rose to the highest job in the land his kids sold their souls to him even more than they had before, and that same dynamic is highlighted (perhaps we should say "lampooned") on Succession. The show would be unbelievable if we hadn't watched it play out first hand in real life.

At the same time, though, there's the promise of consequences. It doesn't feel like the producers of the show are really in love with any of the characters so its doubtful any of them are going to wear plot armor and somehow manage to come out of this series completely free. The people behind the show have stated that the series will run about five years and with a planned ending in mind you have to suspect that they'll take Logan to the natural conclusion we could all only hope Trump will follow as well: ruination over crimes committed. Maybe that, there, is the fantasy: that rich people, these truly rich upper one-percenters, will ever face true consequences. But that is a fantasy I'd happily watch if it occurs. In the meantime we have these awful, yet compelling, people to watch as they try to kill each other for just a little more love from daddy. The third season has just started and I'm already willing to continue down this awful journey.