Watchmen is not a story that calls out for a sequel. Despite what DC ComicsOne of the two biggest comic publishing companies in the world (and, depending on what big events are going on, the number one company), DC Comics is the home of Superman, Batman, Wonder Woman, and just about every big superhero introduced in the 1930s and 1940s. might argue, with their Before Watchmen and their Doomsday Clock, the way the original comics ends (and, arguably, the 2009 movie as well), there is no reason to continue on with any of those characters. We've seen them come about as far as they can as heroes and anything further on the matter would just push them outside their natural ending. It'd feel like fan-fiction, even if it had been written by Alan Moore and Dave Gibbons. 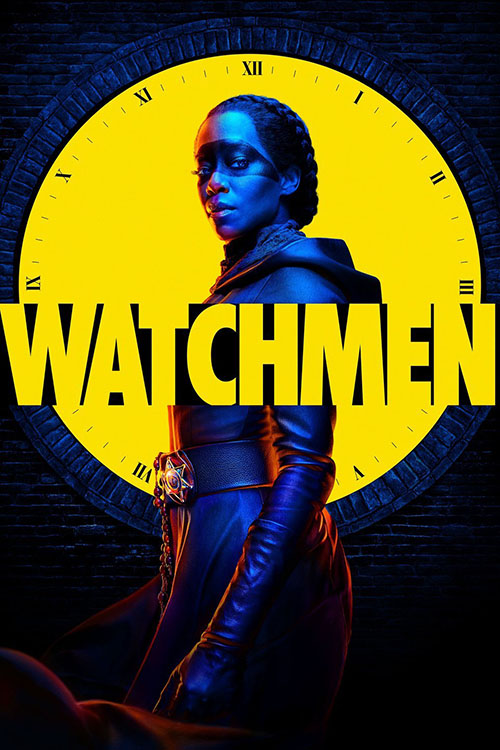 Despite this, though, DC really wants to continue the property (to keep it in their hands so the rights don't revert to Moore and Gibbons and to milk it for financial gain). It the reason why when they announced an HBO series based on Watchmen, most of the Internet let out a collective sigh of exasperation. This was only made worse when it was announced that the series would come from Damon Lindelof (who managed to mess up such films as Prometheus, Star Trek Into Darkness, and Cowboys and Aliens). Was this really the guy that should be in charge of a Watchmen sequel? This felt like giving it to someone like Zack Snyder and expecting something good. Would DC never learn?

Now, as I've noted before, I don't hold any particular love for the original Watchmen comics -- they're fine but they don't really do it for me -- but even I can recognize the importance of what Watchmen did. Whatever a sequel, or prequel, or what-have-you would do, it would have to do it respectfully and in such a way that it felt like a natural, earned continuation of the series. And, surprisingly, the )nternet seems to feel like Lindelof did right by the original comics when 2019's Watchmen debuted. Somehow the dude managed to make a sequel that felt like a proper continuation. How did he manage that?

As I discovered, going in blind to binge the whole season once it was done airing (thank HBO for their Online streaming service), Lindelof made a respectful Watchmen by doing what Zack Snyder simply didn't know how to do: he went political. The series opens in Tulsa, OK, 1921, right before the Tulsa Race Riot. This is an event that had been largely forgotten in American history (this season of Watchmen is credited with reminding people this was an event that happened and, more importantly, getting it put back into history books), but it's a real event that essentially burned down the "Black Wall Street" of the time period, displacing a whole community of affluent Black people (because White people suck).

After seeing the Race Riot (without glorifying it the way Snyder would have), we jump ahead to the mid 2020s where we meet Angela Abar (Regina King), aka Sister Night, a masked police detective working for the Tulsa P.D. All the police in Tulsa wear masks after an attack on them by the KKK-aligned, Rorschach-inspired Seventh Kavalry three years earlier (when these white supremacists attacked and killed almost all the police in Tulsa on the same night). Now the police deal with white supremacists with an iron (and violent) fist. Sister Night will soon have a lot on her plate as the Seventh Kavalry is back, and this time they have a big, ambitious plan that somehow is going to tie in Agent Laurie Blake / Silk Spectre II (Jean Smart), Adrian Veidt / Ozymandias (Jeremy Irons), and, yes, Doctor Manhattan (Yahya Abdul-Mateen II) as they grapple with this new threat to the peace and prosperity not only of Tulsa but, potentially, the world. 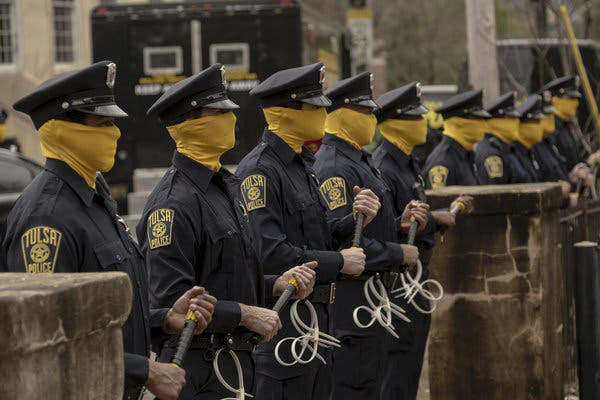 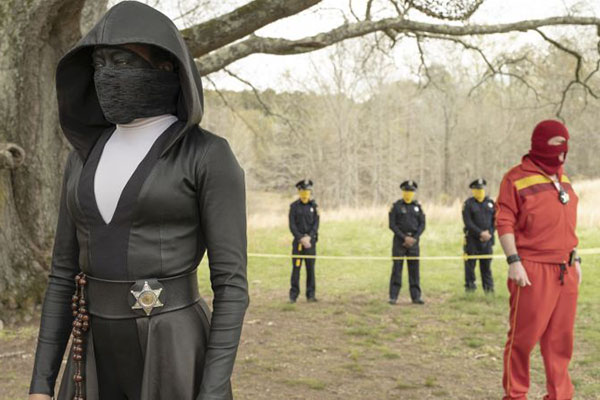 Credit is due to this new Watchmen for finding the political topic we all need to discuss and bringing it out in the open. Where the original comic dealt with the threat of impending war and nuclear annihilation, 2019's TV series focuses on race, white entitlement, and what we own to each other as we grow as a society. Using the Tulsa Race Riot as a starting point the series is able to explore race in modern America via not only a black female lead, King, but also through the eyes of past characters too (even exploring a character that wasn't touched upon much in the original comics, Hooded Justice). The series has topics it wants to grapple with and bring out, making us care for the minorities even as the villains try to belittle and put them down.

Speaking of those villains, though, I didn't really feel like they were strong enough to act as a proper opposing force for King's Sister Night. King's character is written, and acted, so well that there has to be a similar, charismatic force on the other side to act as her mirror. You need a strong villain, one that even if you don't agree with them you at least can get into their mindset and understand them. The best villains are charismatic forces who lull you into their way of thinking, almost making you their crony in the process. Watchmen doesn't have that; instead of a real villain we have the Seventh Kavalry, a group who go through the whole movie with homemade Rorschach masks without any clear leader (at least until the last few episodes).

What's worse that the Seventh Kavalry being faceless and without a leader is the fact that they're just a bunch of dumb white supremacists. By that I mean they aren't characters anyone can easily get behind, not if they're watching a show with a strong female lead. Making a KKK-aligned group (some of them with literal hoods in their closets) the villain opposite a black hero is like making the villain opposite a Jewish hero a group of Neo-Nazis. Sure, we can see why they're fighting, but most (if not all of us) are far enough removed from the villain (their politics, their way of viewing the hero) that we can't appreciate their villainy at all. It's an easy target but not a very good one.

The series seems to understand this as, over the course of the first season, the show lets the story wander to other tales, looking at Veidt and his forced imprisonment, at Doctor Manhattan and what he's been doing for all this time, as Sister Night, her family, and her connections to the past of Tulsa. There's a lot of story and the series is able to efficiently unpack a lot of it, conveying all the information we need to get through to the last couple of episodes and understand all the stakes. It's respectable, really. 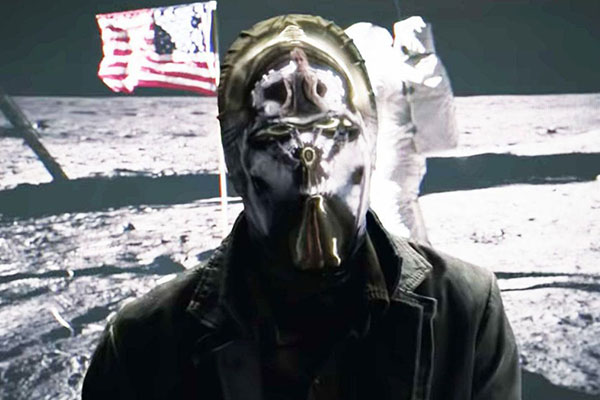 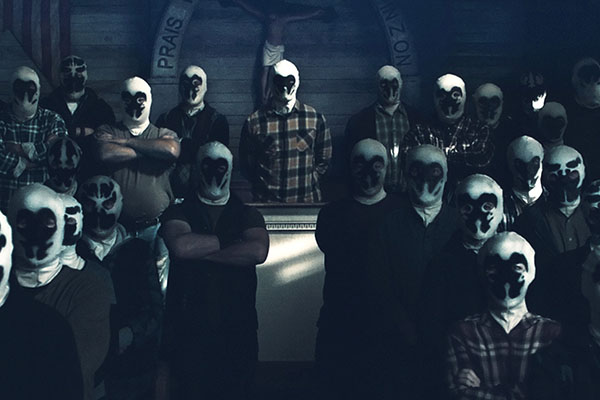 But, at the same time, the show often loses its footing and falls down narrative wells that, while compelling on their own, seem to suck time away from the main story. There's an episode midway into the season that focuses on Hooded Justice (and it's a great story), and then another episode even later focused on Doctor Manhattan (which is also fantastic). I think each of these episodes are rock solid and both could stand with Doctor Manhattans tale told across his life from the original Watchmen, but while they're interesting they're each also two one-hour chunks that delay us from getting back to the main case on our plates. Do they have important information? Sure, but I don't think it's enough information to warrant two full chunks of time that could be spent more efficiently getting us to the end game.

It leaves me a tad bit split on HBO's Watchmen. I really enjoyed the setting, the acting, the characters, and how the show managed to provide a sequel that felt like it understood how to tie into the comics while exploring its own politics. But there are a few stumbling blocks that, while not, killer, keep the pace of the show from being perfect. I enjoyed what I got but I do wish it had been tighter.

Interestingly, the show ends in a place where it probably doesn't need a sequel. Even series creator Lindelof feels like the show may have said all it needs to say. So, in a way, the show is that much more like the comics than we might have guessed: it tells a tale that needs to be told and then leave itself in a place that precludes any possible sequel. Maybe in another twenty years we'll have someone else come along and find a new story to tell in the universe. Right now, if Lindelof doesn't continue the show, I feel like we got all the story we need right here.