Although I do tend to watch everything, I will fully admit a number of films and shows that I'd otherwise probably watch sometimes fall through the cracks. The Summer of 2011 saw a number of big films come out -- Fast Five, X-Men: First Class, Captain America: The First Avenger, Rise of the Planet of the Apes -- and with limited resources an only so much time, some movies had to be prioritized. Hell, I'm a huge Green Lantern fan, but the Ryan Reynolds flick got such horrible reviews, I passed on watching it so I could see other movies on my list instead. 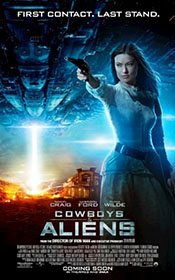 This was also the fate that befell Cowboys and Aliens. Although I certainly was amused on the concept -- It's cowboys! Fighting aliens! -- the movie got such bad reviews that I figured, "eh, may as well catch it on video instead." I did buy the film eventually, when it was cheap, but then it just sat on my shelf until yesterday when I saw it. My entire reaction was, "oh, right. That was a movie that happened." Still, lacking anything else I wanted to watch instead, I popped in Cowboys and Aliens to see if it really was just as bad as it's reputation suggested. In short: I was wise to give this movie a pass.

Waking up in the middle of the dry prairie, cowboy Jake Lonergan (Daniel Craig) finds himself bootless, gunless, without any memory of who he is or why he's out there. He also has a weird bracer strapped to his arm, and he has to way of removing it. A few ruffians stumble along at this moment, so Jake steals some boots, a gun, and a horse from them and sets off to find out who is is and what's going on. Ending up in the town of Absolution, Jake gets mixed up in an altercation with the local cattle baron's son (Paul Dano), and soon after is then arrested himself because he'd done so no good, very bad things in his past and there's a reward on his head. The cattle baron, Woodrow Dolarhyde (Harrison Ford), soon comes to town demanding the release of his son and Jake's head as well.

This is probably where things would have gone south for Jake, but then the Aliens show up, kidnap a bunch of the townsfolk, and blow up huge swaths of the town. Only Jake is able to stop any of the aliens, and that's because of the bracer which is actually an alien weapon. Soon, the townspeople, led by Jake and Woodrow, venture out to save their people, fight the aliens, and maybe save the Earth as well.

Conceptually, yes, Cowboys and Aliens does technically deliver. If you are going to a movie called "Cowboys and Aliens" and your two qualifications are there need to be cowboys and aliens in the same movie, then this movie 100% has both those qualifications. What it doesn't have is any fun with the concept at the same time. Cowboys and Aliens is a dull, dour affair. When people grouse about how westerns are slow and plodding, this is the kind of western they mean. Lots of long shots of men riding slowly through the wide open plains, talking tough and not doing much until the studio prescribed 10 minute mark (where, by formula, every action beat has to happen). 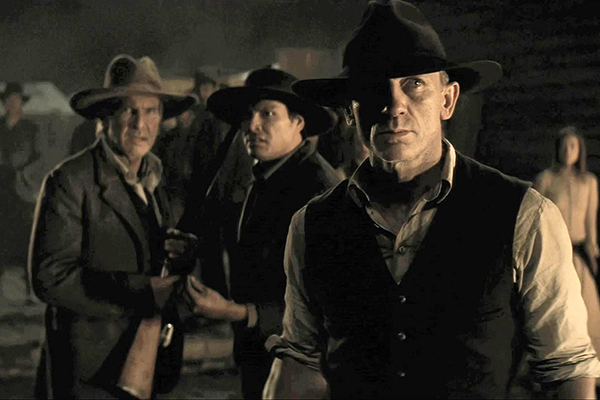 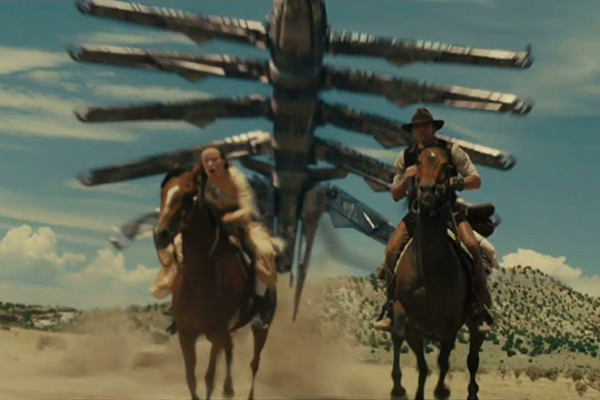 It's a tragedy, really, because a movie with such a goofy title like Cowboys and Aliens should have fun with its concept. Say when you will about a movie like Snakes on a Plane or Sharknado, but neither of those movies try to be anything more than they are. They're stupid, goofy flicks that delivery B-movie thrills on top of a dumb concept. And yes, the whole idea of cowboys fighting aliens is dumb.

As illustrated by the movie, the cowboys are clearly outmatched when it comes to a fight with the aliens. These outer space bad guys have ships that can't be shot down by conventional means (pistols don't do a thing to them), and they have toughened hides so even standard bullets barely phase them. If not for Jake's wrist-weapon, the cowboys would have lost the war before the end of the first act. The movie straight up knows the cowboys couldn't defeat the aliens in a fair fight, but instead of being goofy about it, it treats the big alien reveal sequence, and every scene after it, as straight-faced as it can.

I don't know if the fault here is with director Jon Faverau (who usually can create some pretty fun, enjoyable movies) or the studios demanding a tent-pole action film, but in either case the film drastically misunderstands the appeal of a movie featuring both cowboys and aliens. A film like this should have dumb horse stunts, cowboys flying space ships, and an alien rodeo. Maybe it doesn't need to be as campy as Mars Attacks, but it should at least be within (tobacco) spitting distance of it. Instead, this is a grim period piece that just so happens to have aliens in it.

I will admit, at least, that the acting is decent, certainly not B-level bad, but I don't think that any of the leads really know what kind of movie they're acting in. Harrison Ford, for example, shows up to play Harrison Ford, a grumpy old man grumping around the place. Ford can play this character well enough, but that's only because it's not really a character at this point -- this is just who he is. Daniel Craig at least seems like he's trying to have fun, but I don't know if Craig has managed to have fun once since he started playing James Bond. His character, Jake, is essentially an outlaw-cowboy version of James Bond. He cracks a smile a couple of times when the material starts to edge towards goofy and dumb, but he always resets back to grim-dark stoic. 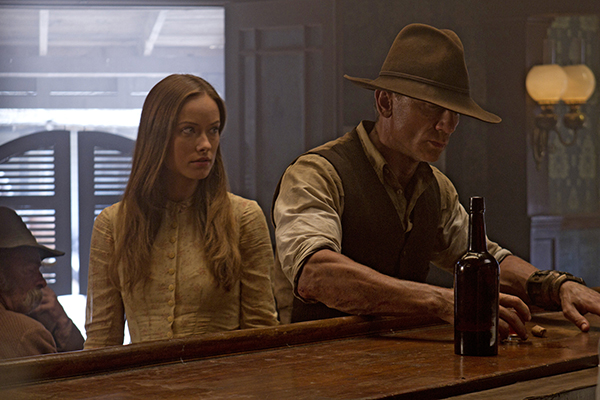 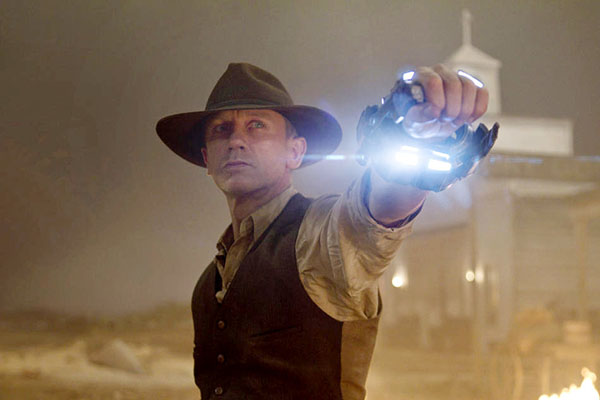 And then there's Oliva Wilde who isn't quite the love interest but that's also, essentially, her job. If there can be a stoic, alien version of the "manic-pixie-dream girl", there simple to motivate our grim-dark hero in a grim-dark way, she does it. Really, none of the females in the movie come out well. I only recall four women being in the entire movie, one packed full of dudes, and of those: Oliva's Ella is there only to motivate the hero; Abigail Spencer's Alice who's Jake's love interest, and is also killed before the movie even starts; Ana de la Reguera's Maria, the barkeep's wife who is captured by aliens and not seen for most of the run time, and an unnamed Native American extra. That's not a great list of roles for the ladies.

The worst of it, though, is that nothing in the end really changes. Sure, the aliens show up and push the characters around some, but if the aliens were removed, not a whole lot would be different in the town afterwards. Everyone would go back to their lives (as they do), regardless of what happened in the middle acts. Nothing is fundamentally changed despite the fact that freaking aliens showed up and were then, eventually, defeated by cowboys. It shows just how little story there is to the movie when a climactic battle between cowboys and aliens doesn't, in any way, change anything about the lives of any of the characters involved.

Cowboys and Aliens promises a big-budget goof on the concept of cowboys and aliens fighting. Instead, though, it wastes 90 minutes plodding about, being stoic, and having absolutely no fun. I'd hoped for a forgotten gem, but Cowboys and Aliens would have been better left sitting on my shelf for another seven years.